Instagram, the wildly successful photo sharing service that started as an iOS-exclusive app, launched its first Android app on 3 April 2012, and garnered 5 million Android app downloads in its first six days. But that news was a mere spark compared to the following week’s bombshell announcement of Facebook’s intent to buy Instagram for $1 billion, which briefly pushed the free iOS app to the top of the charts in the App Store the following day.

However, much like when a beloved indie band signs with a major label and subsequently alienates some of its core fan base, Instagram found some of its loyal users turning against it. Anticipating this, Facebook CEO Mark Zuckerberg used his Facebook post announcement of the deal to assuage Instagrammers that the strengths of the service would remain:

Still, many Instagram users took to Twitter (using the #instablack hashtag) to announce that they would be deleting the app, and not just because their indie darling (with 30 million users) was going corporate. It’s still unclear how Facebook will be using images captured by the Instagram app, and that fact combined with Facebook’s reputation for shifting privacy policies has fueled much of the backlash.

If you are considering deleting your Instagram account, the process is actually fairly painless. However, be warned that deactivation permanently removes all photos (as well as all comments and friendship connections). So before you pull the trigger, you’ll first want to make sure you have all the photos from your Instagram portfolio safely tucked away somewhere locally.

You may already have all of your Instagram photos in the Photos app on your iPhone or iPad depending on your Instagram preferences (found in Settings > Instagram), which can save either (or both) the original snapped image or the filtered photo. However, if you want to export a complete snapshot of your portfolio (or you haven’t been saving images to the Photos app), several third-party options can hook into your Instagram account to download the image files to your computer’s hard drive. Surprisingly, Instagram doesn’t have a Web interface that can access your photos.

Instaport Internet Tool — Recommended by Instagram in its support center, the free Instaport service (donation suggested) enables you to download your entire Instagram history in a single Zip archive. Additionally, it offers some advanced options that enable you to filter photos based on recent history or date range. It can also filter for specific hashtags, as well as other users’ photos that you’ve “liked” (though Instaport notes that the like filter is unstable).

After logging in to Instagram and allowing Instaport to access your data, choose to download a Zip archive or click Advanced Options and select your filtering method, then click the Start Export button. If you have an extensive library, the export might take some time. When it’s ready, a download link appears above your account name. If you want to try exporting photos that you’ve liked from your Instagram friends, you can repeat the process and start a new export. In my test, I got 13 photos that I recently liked — far fewer than the total that I’ve liked over my Instagram history. 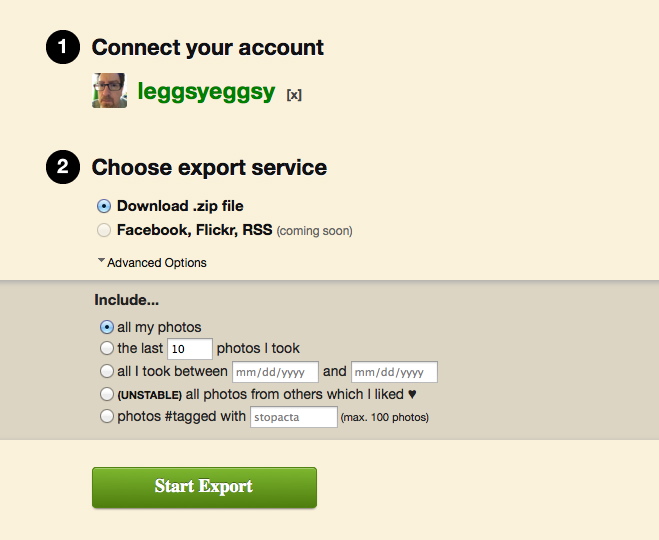 InstaBackup Mac App — David Smith’s free InstaBackup app does one thing and one thing only — it backs up the entirety of your Instagram photo library to your Mac’s hard drive. The only thing you can configure is where the photos will land (by default, it saves them to a folder on your Desktop). But it does the job simply and effectively.

InstaBackup is a good tool for all Instagrammers — whether you’re leaving the fold or staying — as it’s an easy way to create a local backup of your Instagram photos. The app compares the photos that reside in your selected backup folder with what’s in your Instagram library, and downloads only those photos that are missing (i.e., most recent photos, but also any image files you may have deleted from this directory — so make sure not to delete or move any photos or they’ll download again). 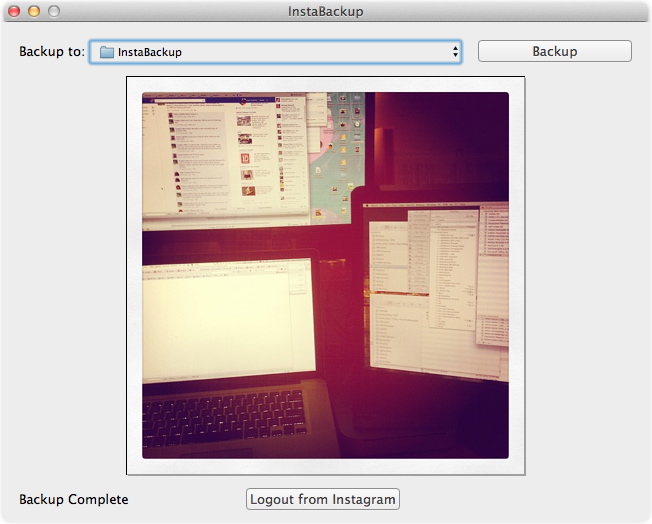 Via.me Social Network — One part Tumblr and one part Pinterest, the recently launched Via.me social publishing platform is inviting current Instagram users to port their photos into a Via.me profile. You can choose to sign up for the Via.me service from its front page using either your Facebook or Twitter login credentials, or you can create a unique Via.me login on its Instagram import page. After creating a Via.me account, sign into Instagram and authorize Via.me to access your photos. When the porting is complete, you’ll find
your Instagram photos have automagically appeared in your Via.me profile.

Note, however, that the Via.me iPhone app is frustratingly limited to accounts that have been linked to either Facebook or Twitter. Thus, if you create a Via.me account on the Instagram import page and then don’t subsequently set up links to those services in Via.me’s Account Settings page, you won’t have access to Via.me through the iPhone app.