I know what you’re thinking: you need more encryption in your life. Of course, you’re not really thinking that. No one but security wonks like me and TidBITS Security Editor Rich Mogull has any interest in the stuff that makes transactions and communications safe from snoopers. Rather, you know you want privacy and security, but you likely don’t care about the details.

A new software product, DropKey 1.0 from WellRedApps, should therefore merit your attention, at least if you’re running Mac OS X 10.7 Lion, which it requires. It’s a dead simple way to exchange encrypted files with other people without a lot of overhead or fuss in making the exchange work securely. DropKey is also secure and powerful enough that security wonks will like it, too. (Note: I offered the developers free advice while beta testing DropKey, especially about key verification, but received no compensation and have no financial or other interest in the success of the application.)

DropKey and Public Key Crypto Basics — After you install and launch DropKey, it appears as an icon in your menu bar. Click it, and a dialog reveals a drag-and-drop area into which you can put files and a space to enter recipients, who are matched from your Address Book. Other controls include a share button (the iOS-like arrow coming out of a box) for handing out your public key in various ways, and a gear icon that provides access to preferences, a key manager for viewing and verifying other people’s public keys, online help, and the Quit command. 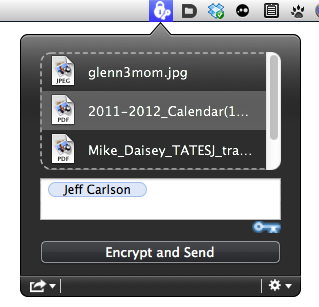 For other people to be able to send you encrypted files, they need to have your public key. DropKey stores your public key as a custom field in your personal contact record in Address Book, and it shares your public key with recipients within a vCard (.vcf) file attached to an email message created in Apple Mail. (vCard is the standard for encoding contacts for export and import; it’s what you get when you share a contact from Address Book on the Mac or Contacts in iOS.) A recipient can import your vCard (via a menu or by dragging) into Address Book, where either a new record is created, or the program prompts to merge the imported vCard with an existing entry. You likewise need the DropKey public keys from those to whom you wish to
send files. It’s a one-time hassle to exchange keys. 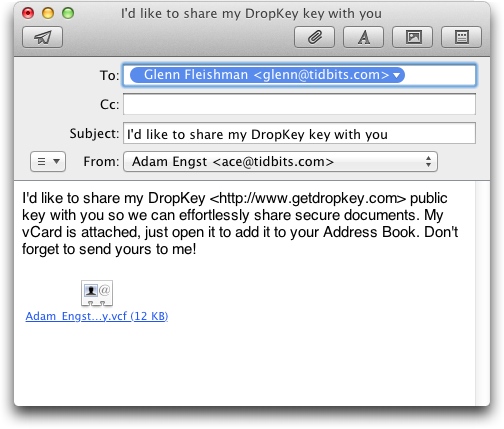 (A privacy warning about your personal Address Book entry: if you store data in there that you don’t want shared, you should disable the export of those private fields. In Address Book, click Edit for your entry, and then uncheck the boxes to the right of the fields you want to keep private. In general, I recommend against storing private data in your Address Book entry, but you might also consider not sharing your birthdate or partner’s name.)

If exchanging public keys is too much trouble for some reason, DropKey also offers a less-secure password mode. To use it, click the skeleton key icon in DropKey’s dialog; you’ll have to share the password with the recipient in some other fashion. The password mode also works with an unregistered copy of DropKey even after the 30-day-trial ends.

DropKey compresses the files you’ve dropped into its dialog into a Zip archive and then encrypts the archive. It can create a message in Apple Mail (click the Encrypt and Send button below the file list) in a single step, or you can set its preferences to encrypt only (or hold down Option, which changes Encrypt and Send to just Encrypt). That lets you save the encrypted archive to your hard drive, after which you can attach it to a message in any other email program, transfer it via iChat, sync it via a shared Dropbox folder, share it via Dropbox’s Public folder, or use some other means to hand it off.

DropKey Verification to Prevent Man-in-the-Middle Attacks — It’s worth pausing briefly here to note exactly what DropKey is good for, and what it’s not good for. DropKey is not a local encryption solution — while you certainly could encrypt a file locally and delete the original securely, such that the encrypted version was all that existed on your hard disk (and your recipient could do so as well), that’s not the point of the program. Instead, DropKey is designed to protect files in transit between you and a recipient, along the entire path of networks to which you’re connected and servers that might handle your message. (Using SSL/TLS in your email
program is good, but protects the communication only between your computer and your SMTP server, leaving attachments vulnerable to snoopers along the way and at the recipient’s email provider.)

Nevertheless, public-key cryptography can still be subject to “man-in-the-middle attacks,” in which a bad guy eavesdrops on your communications and sends you his public key instead of the one that your recipient would send, presumably forging the email such that you aren’t aware of the substitution. To foil this attack, you use an “out-of-band” method to verify your recipient’s public key. For example, after you send someone your DropKey public key via email, you then make sure it’s the right key using the telephone or secure chat or even an in-person conversation — any method other than email that you feel assured is free of interception or compromise. To make this verification easier, encryption software can create a
so-called “fingerprint” that uniquely identifies a very long key with a small number of bytes. Unfortunately, fingerprint verification is rather tedious in practice.

DropKey can help here, too. WellRedApps has created a small dictionary of words that DropKey uses to let you verify just four bytes of the fingerprint. It turns those four bytes into four words that you can use for verification using any other out-of-band method, like Messages, Skype, or a normal telephone call. I confess to suggesting this idea to the developers, and it makes saying “My key verification is ‘encumbrance stake Zs chum’” rather hilarious.

In DropKey’s Key Manager, you view the entry for a person whose key you’ve received, make sure the words they tell you match, and click Verify. This is almost perfect. (You can have perfect verification only if you confirm the entire fingerprint, but while the odds of a man-in-the-middle being able to compromise this system are not zero, they are infinitesimal.)

The Key to the Future? — DropKey is a strong product, but it’s also a version 1.0. Its biggest weakness out of the gate — apart from requiring Lion in a world where many Mac users are still using Snow Leopard — is that the private key that it generates for you at launch is stored in a system keychain, and can’t easily be synced to multiple Macs. If you send and receive email on multiple machines and install DropKey on each, you will confuse senders (as they would need multiple keys for you) and be able to decrypt received files on only the machine that matches the particular key that the sender used. WellRedApps says that it is working on a better approach to
this issue. (I don’t know how many people use multiple machines for email. I use two: a desktop and a laptop.)

I also experienced some minor problems with verifying keys and decrypting files on first launch. After quitting and re-launching DropKey, these problems went away, although a few cosmetic issues with the program persist. I’ve submitted bug reports to the company, and based on past performance, I expect they will be addressed soon.

For strong encryption without burdensome management of keys, DropKey is a solid solution, and anyone who needs to share encrypted files will appreciate its ease of use — in particular, I can imagine lawyers relying on it heavily to ensure confidentiality when trading drafts of legal documents back and forth with clients, so long as they’re all Lion users.

DropKey will retail for $29.99, but WellRedApps is offering a $19.99 introductory offer for a limited (but unspecified) time, both directly and from the Mac App Store. There’s also a free 30-day trial version that you can get from WellRedApps (since Apple refuses to allow trial versions in the Mac App Store). In a particularly welcome move, when you purchase a copy of DropKey directly from WellRedApps, you also get a coupon for a free second license, since it’s impossible to use DropKey without someone with whom you can exchange files. Those who purchase from the Mac App Store can contact WellRedApps at support@wellredapps.com to receive the coupon for the free second license.