It’s no surprise to anyone who knows me that I live on Twitter, where I enjoy many interesting conversations, some rapid and some languorous. Twitter has the concept of threading built in, and good Twitter clients correctly create a conversation you can view.

Storify is one of several services that lets you build plain or annotated narratives from a variety of publicly available sources, including Twitter, Facebook, and Flickr. The site has an interactive drag-and-drop approach to finding messages or posts and putting them into the construct of a story. A few weeks ago, some Twitter buddies and I constructed an impromptu and silly Apple-themed parody of “2001: A Space Odyssey” that I captured in Storify. Without Storify, that nonsense would have been lost forever. (Some might think that a good thing.)

It’s not just for nonsense. Storify allows the ephemeral to be captured if it’s worthwhile. While Twitter may seem a hive of triviality, and Facebook only for personal chit-chat about babies and political rants, an enormous amount of communication happens. Nearly all of it may deserve to hit the bit bucket.

But for those cases in which something more than idle chatter emerges, Storify enables you to preserve and structure a discussion. You can write connective material to explain how the narrative you’re presenting holds together, share it in a way that anyone can read, and allow comments on it. For me, this becomes useful when I have an informative discussion in which the back and forth leads me to new knowledge. For others, capturing a conversation among participants in an issue, whether reporters discussing a story, public figures arguing a point, or activists planning their next move, keeps that moment fixed for review and citation.

My go-to Twitter client of choice in iOS is Tweetbot ($2.99, separate iPhone/iPod touch and iPad versions), whose approach to Twitter flow and conversations matches my conception of such interaction. You can swipe right on any tweet, and Tweetbot reveals any associated threaded discussion. (A version of Tweetbot for Mac OS X is apparently coming, but it’s not yet in public beta.)

Now two great tastes have come together: Tweetbot’s latest update, version 2.3, has direct support for publishing to Storify. View any conversation, tap the action button (the arrow in a box) in the upper-right corner of the screen, and choose to email or tweet a link. The conversation is stored in Storify, even if you don’t ultimately send the email or post the tweet. You can then log in to Storify with your Twitter account, and edit and frame the conversation. If you have an existing Storify account linked to your Twitter account, the post will also be linked to your collection of stories. 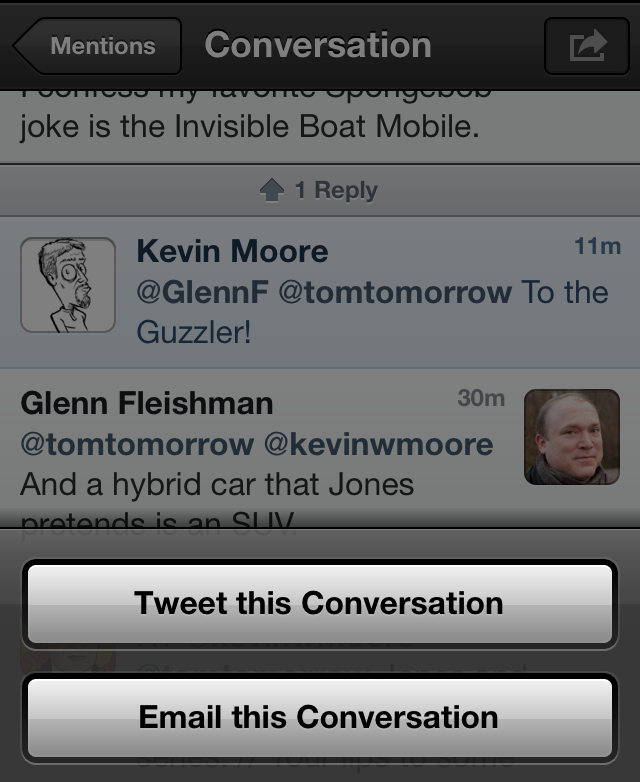 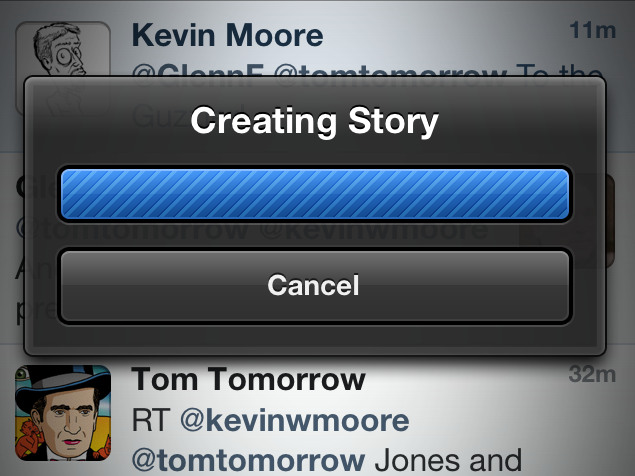 You may post messages to Twitter that you’d like to sink to the bottom of the sea of bits forever. But I find increasingly that smart ideas are captured in the ad hoc banter there. Tweetbot’s connection with Storify should make it simpler to archive dialectics for later dissection.