A highly technical friend recently posted to a private mailing list of Mac and iOS programmers with an odd-sounding problem: after he updated his iPad 2 to iOS 5.1, he lost about a quarter-inch of the screen on the top and bottom of his iPad. Everyone was stumped by his description of the problem, and it wasn’t until later, when he was messing around with the iPad in person with another friend, that they hit on the solution.

For unknown reasons, iOS on my friend’s iPad had decided to enable its Zoom feature. Hidden deep within iOS’s accessibility settings, Zoom enables people with low vision to magnify the entire visible screen, in essence turning the iPad’s physical display into a window on a much larger virtual display. The confusing bit for my friend is that he didn’t turn Zoom on intentionally, and he is neither the sort to do such things unintentionally, nor to share his iPad with someone else who might have. From what I can tell from reading a variety of Apple Support Communities discussions, it’s not entirely uncommon for Zoom to be toggled without the user’s knowledge, either by another user or by iOS gremlins.

Regardless of how or why Zoom can be enabled inadvertently, if you’re experiencing this problem, here’s how to solve it. Go to Settings > General > Accessibility > Zoom, and turn Zoom off. If, on the other hand, you’re thinking, “Hey, it might be nice to be able to zoom the screen on occasion,” you can turn Zoom on, and remember that the magic incantation to invoke it is a double-tap with three fingers. Those three fingers remain important, since double-tapping again returns you to the default magnification level. And, if you want to change the magnification level, double-tap with three fingers and then drag up (to make objects on screen larger) or down (to make them smaller). 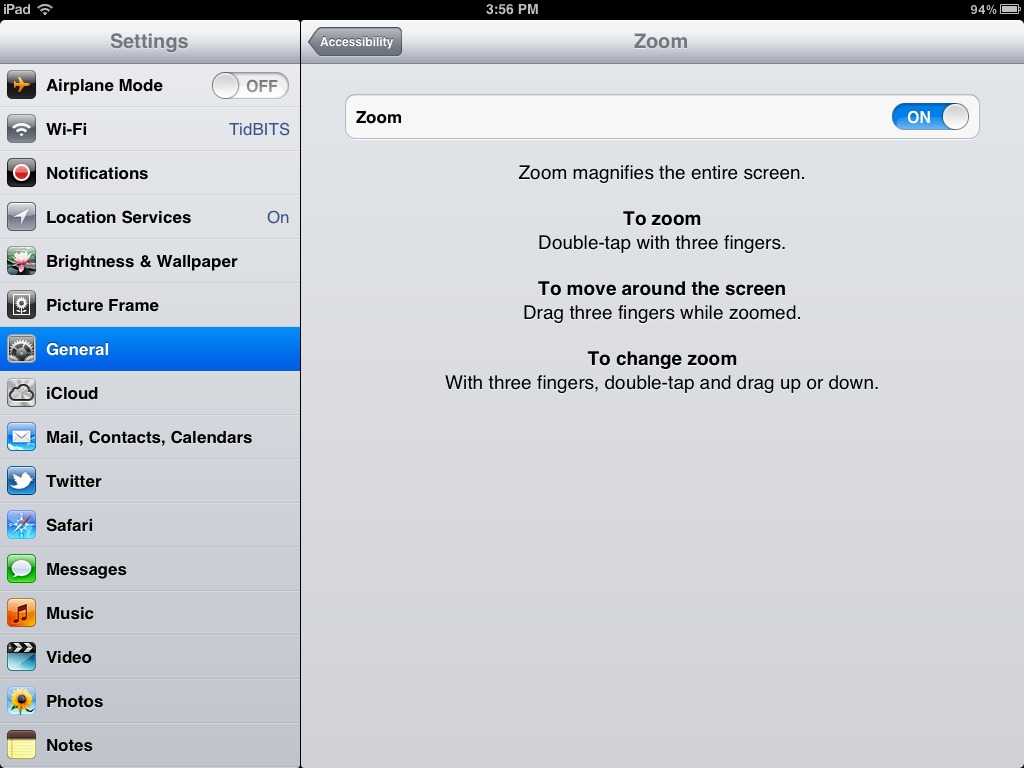 When I raised this article topic on our TidBITS staff call, “Take Control of Using Lion” author Matt Neuburg immediately chimed in to say that he had heard numerous reports over the years of people running into roughly the same problem in Mac OS X. It’s easier to zoom the screen accidentally in Mac OS X, where holding down the Control key and swiping up with two fingers on a trackpad or rolling up on a scroll wheel or scroll ball will zoom in. Swiping or
scrolling down with the Control key held down zooms back out.

The problem is that if you zoom only a tiny bit, the main evidence can be slightly fuzzy text and graphics, since everything is being scaled just a little, along with an occasional slight movement of the entire screen because the zoomed image follows the position of the mouse pointer. (Users who have experienced this accidental zooming often describe feeling slightly nauseated by their screens.) This setting is off by default in Mac OS X 10.7 Lion, but it was on by default in some earlier systems, so that users often stumbled on this feature by chance, without knowing what it was. On your machine, you may have turned it on, or you may have inherited an “on” setting from an earlier system.

In pre-Lion systems, this setting was available through the Mouse or Trackpad pane of System Preferences. In Lion, however, it can be harder to find, and the interface is somewhat deceptive. It appears, at first, that you control zooming in the Seeing view of the Universal Access pane of System Preferences. In reality, though, the overall Zoom setting can be set to off, but the trackpad/scroll wheel/scroll ball approach still works if it’s enabled separately. (All that turning Zoom off really does is disable the Command-Option-plus/minus keyboard shortcuts for zooming to preset magnifications.) 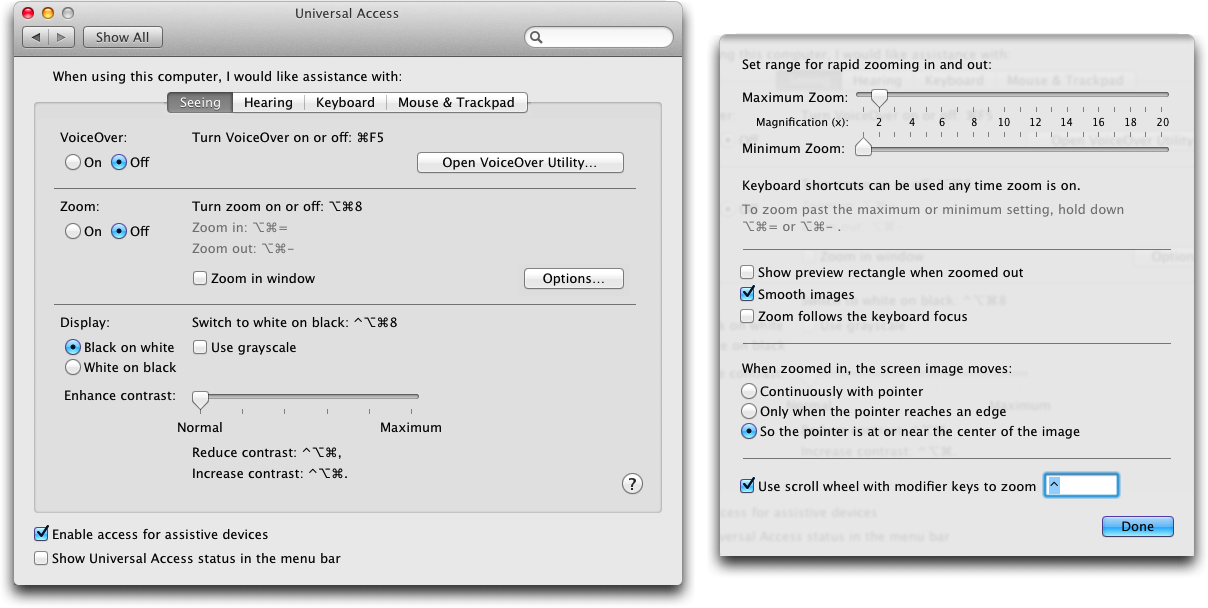 The setting you want — “Use scroll wheel with modifier keys to zoom” — is in the dialog that appears when you click the Options button. (In Lion, you can also use “Zoom using scroll wheel while holding” in the Mouse preference pane; it applies universally, even though there’s no comparable setting in the Trackpad preference pane.) Be careful in this dialog! It is very easy to change the modifier key setting accidentally when this dialog is open. I generally recommend leaving this feature turned on, though you
might prefer to set the modifier-key trigger to something you’re less likely to use by mistake, such as Control-Option, or even Control-Shift-Option. It’s just too useful to be able to zoom in on something small on occasion.

For a full explanation of the many zoom options, see “Take Control of Using Lion,” where Matt has documented them exhaustively.