FileMaker Pro 12, the database’s first integer-level update in a year and a half, offers little change in the way data is managed, stored, or structured. Instead, as Mark Anbinder discussed in his coverage of the update’s release (see “FileMaker 12 Adds Power, Clarity, and Free iOS Apps,” 4 April 2012), the focus is on display, presentation, and appearance. FileMaker’s Web site claims that this latest version offers “stunning” and “eye-catching” database design tools, and while this is clearly advertising hyperbole (it’s still a database!), FileMaker Pro 12 does improve significantly on earlier versions’
layout tools.

New Layout Tools — The primary enhancement that FileMaker Pro 12 brings is themes. Earlier versions included preset designs for new layouts, but they were riddled with problems, not least the fact that they were often garishly coloured and quite puzzlingly unattractive — some even looked like they could easily have been designed by a seven-year-old with a crayon. But even if you decided that you really, really liked the orange and yellow of Brick Screen, for example, the colour scheme of a layout created using that style applied only to fields added during the creation of the layout. Fields added afterwards had to be styled manually — colour, typeface, type style all
reverted to FileMaker’s defaults. 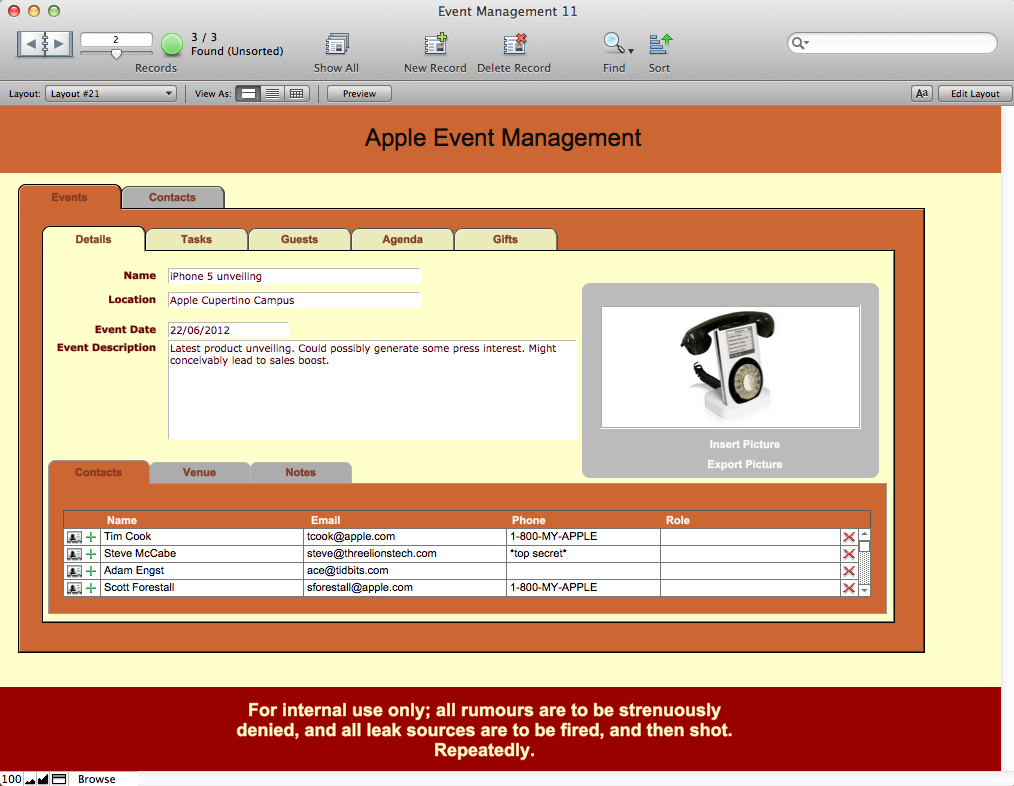 But this, mercifully, has changed. The 40 new themes are generally less gaudy and tacky than previous styles; the Retro theme is reminiscent of one of the skins available in Claris Organizer, which was sold to Palm when Claris became FileMaker, Inc. (“Claris Organizer Reincarnated as PalmPilot MacPac,” 11 May 1998). And the Wave theme would probably look quite at home on a Windows 7 desktop, which you may or may not feel is a good thing.

FileMaker Pro 12’s layouts are now much more tightly linked to their source themes. New fields added to layouts after their initial setup automatically inherit the styling of that layout’s theme. And themes can be switched after the fact — if the Wave theme really does remind you too much of Windows, then a quick trip to the Layouts menu’s Change Theme command will change the entire layout’s theme to something less jarring.

Refining elements within a layout has also been improved in FileMaker Pro 12. Perhaps the most important change has been to the way in which layout objects are selected. In previous versions, objects had to be enclosed completely by the selection area, but now the selection area merely has to overlap the objects you want to select. This is a long-overdue standardisation, but I have a suspicion that it might initially confuse veteran FileMaker designers used to the old approach.

Once layout elements have been selected, they can be styled much more extensively than had previously been possible. Gone are the dated dither patterns that somehow clung to life through FileMaker Pro 11; in their place come colour gradients for fields and buttons. Corners can be rounded to a specified radius; if a number of buttons are butted up against each other, for example, in a horizontal list, then rounding off the left corners of the left-most button, and the right buttons of the right-most object, can create a modern-looking style. Objects can be given different styles for different states, so that the currently active text input field might have a stand-out background colour, while a script-triggering button could be styled to
change colour when moused over, and again when clicked. 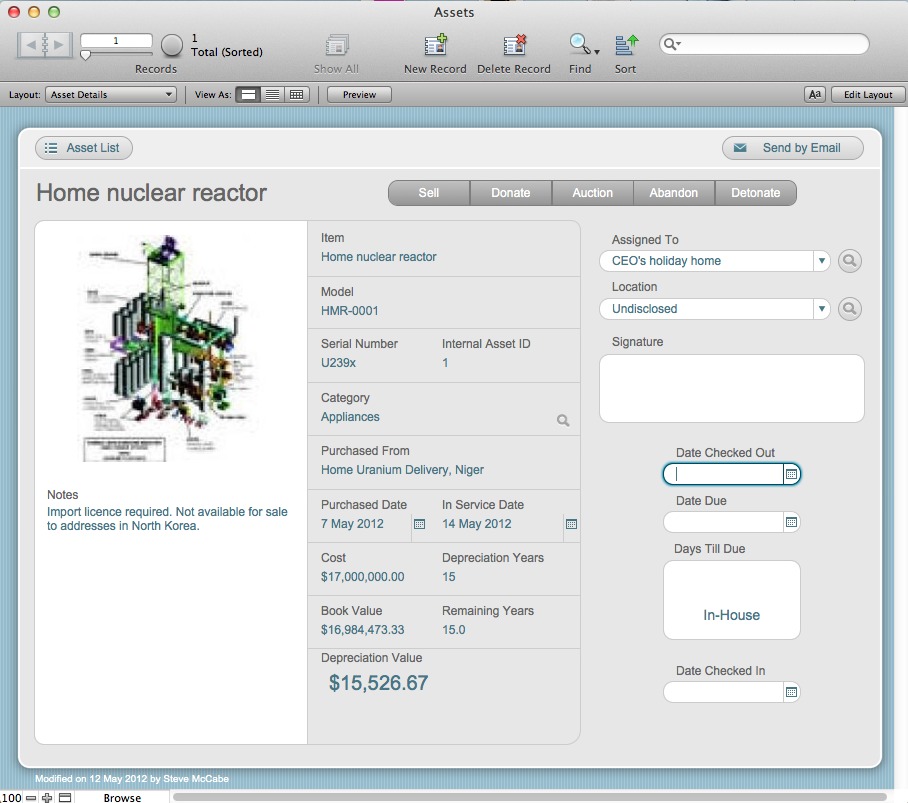 FileMaker Pro 12’s layouts are a decided improvement over the psychedelic mistakes of earlier versions’ colour schemes, but they might not be to everybody’s tastes. It’s a shame, then, that there appears to be no way for developers and designers to create their own themes, or even to save modifications to existing themes.

Five of the new themes, including the Windows-esque Wave, have companion themes with the word “Touch” added to their names. Clearly the good people at FileMaker agreed with my assessment of FileMaker Go and the constraints placed upon FileMaker Pro designers by the small screen size of the iPhone (see “FileMaker Go Brings FileMaker Databases to iOS,” 9 February 2012). At any rate, these five Touch themes are designed specifically to accommodate the smaller screens of iOS devices running FileMaker Go. More on that later.

File Formats — Long-time FileMaker developers will remember — indeed, many likely still wake at night in cold sweats from the nightmares — the traumatic experience that was the 2004 leap from version 6 to version 7 (see “FileMaker Pro 7: Can You Say Paradigm Shift?,” 15 March 2004). File schemata broke, quite badly in some cases, and an entire industry sprang up around the conversion from Old FileMaker to New FileMaker. But eventually things settled down, and since 2004, the .fp7 file extension has been a reassuring constant in FileMaker developers’ lives, a sign that everything is safe and comfortable.

The transition from FileMaker Pro 6 to 7 was, for many database developers, a growing pain that involved extensive retooling of databases constructed around kludges and workarounds to accommodate the fact that, before version 7, FileMaker Pro was not an actual, real, honest relational database. In an irony that failed to amuse many developers, the transition to a relational architecture broke — in some cases shattered — the data structures of many databases. But they were rebuilt, and have remained sturdy, robust little stores of information ever since.

The bad news for FileMaker developers, then, is that FileMaker Pro 12 brings a new file format, as evidenced by the new extension: .fmp12. The good news is that it won’t be accompanied by the same gnashing of teeth and rending of garments. That’s because the fundamental file structures of existing databases will not require any updating — no rebuilding of databases, no re-configuring of tables and relationships, no breaking of files. Updating a .fp7 file is simply a question of opening it in FileMaker Pro 12. According to the dialog that appears, “after conversion it will only be compatible with FileMaker 12 or later supported versions.” The dialog also offers an option to rename the old file; if this option isn’t selected,
a Name Converted File dialog opens to enable the user to save the converted file, leaving the original untouched.

The new file format is necessary to support the layout themes that are the marquee feature of FileMaker Pro 12, and it also enables an enhancement to the capabilities of container fields in FileMaker Pro databases. In FileMaker Pro 12, .mp3 audio files can be played from within containers, with the option of the audio playing automatically. Similarly, according to FileMaker’s Web site, PDF files can be navigated directly within a container, although the container field will need to be made large enough in
a layout for its content to be viewed easily.

The contents of container fields are now, more than ever, kept at arm’s length from the database itself — a database designer now has the option of either including the contents within the database file or simply placing a reference in the field to externally stored data. The trade-off is that data in container fields is still not searchable, and is increasingly unlikely to be made searchable in future releases.

Going Mobile — As I discussed in “FileMaker Go Brings FileMaker Databases to iOS” (9 February 2012), FileMaker, Inc. offers iPhone- and iPad-based mobile FileMaker clients in the shape of FileMaker Go. The $19.99 iPhone app is a fine and useful piece of software; the iPad counterpart is probably every bit as good, but its $39.99 price tag deterred me from trying it out. On the plus side, both apps have been updated and made free. On the down side, they work only with .fmp12 documents. And here is found the key to FileMaker, Inc.’s new philosophy with regard to their mobile applications.

While this complication does, to a degree, bifurcate the FileMaker universe, it can also be seen as a helpful step on the upgrade path. FileMaker, Inc. clearly wants us to upgrade, as is illustrated by the free iOS apps, but the fact that both FileMaker Pro 12 and earlier versions can be run at the same time should make the upgrade process substantially less painful than the rude blunt-force shock that was the jump from version 6 to version 7.

Should You Buy It? — While the new templates that are the centrepiece of FileMaker Pro 12 are pleasant to look at, and themes are likely to lead to fewer databases that look like they were designed under the influence of exotic recreational pharmaceuticals, there are few standout features of the new version of FileMaker Pro that make it a compelling upgrade.

The tricky questions will be asked by small businesses looking to expand their in-office FileMaker solution to include a mobile dimension. Staying at FileMaker Pro 11 or earlier is, of course, free, but every iPhone with FileMaker Go represents an additional $19.99 cost, while each iPad costs an additional $39.99. With an upgrade to FileMaker Pro 12 starting at $179, upgrading could quickly become more cost-effective than buying multiple copies of FileMaker Go.

Certainly, FileMaker Pro will retain its position as the dominant desktop database development option of choice for many, and the fact that incorporating iOS devices into a FileMaker solution is now both free and easy to implement elegantly makes the entire FileMaker ecosystem a more attractive option for businesses that need a mobile solution. But FileMaker Pro is already a mature and robust platform, leaving the company with the challenge of trying to find new features that warrant a full integer-level upgrade. The design features of FileMaker Pro 12 are certainly attractive, in multiple ways, but unless the designs of your current databases leave you wanting to pluck out your eyeballs, it’s hard for me to recommend an upgrade
unless you’re also looking at needing to purchase numerous copies of FileMaker Go 11 for your existing systems.