My wife, Deborah, who manages the social-media presence of a non-profit healthcare facility in Florida, posted a status update for her client last week. This was utterly unremarkable; she does this several times a day. But this post has, to date, received 2,349 comments, it has been shared 1,026 times, and 36,634 people have “liked” it. These numbers are orders of magnitude higher than those for her typical posts, numbers that, say, Lady Gaga or Justin Bieber (or their social media elves tasked with such mundane activities as tweeting to the hoi polloi) typically expect to see; Deb’s client had, as her boss said, “hit the big time in the world of social media.”

As Deb pointed out, she could have done it only in New Zealand. Over the last fortnight or so, Facebook has quietly introduced a new feature to its site — highlighting. When my status updates appear in Facebook’s news feed, a fourth option now appears below it. In addition to “Like,” “Comment” and “Share,” I can now click a link labelled “Highlight.” Doing so causes Facebook to ask if I want to “Highlight an Important Post.” For US$2, “you can highlight important news to help make sure friends don’t miss it.” 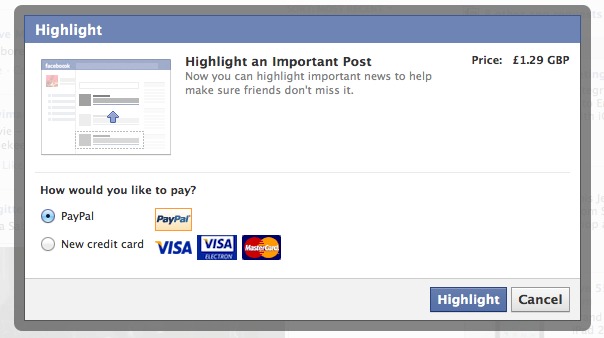 This new feature is being trialled in New Zealand. It is only fair that Kiwis be granted the occasional perk — connectivity in this country being so shonky, it’s sweet to be ahead of the game for a change (see
Paying by the Bit: Internet Access in New Zealand, 15 January 2010).

Facebook appears to be testing this new feature selectively; not everyone I’ve spoken to in New Zealand has access to it yet. And among those of us who can highlight their posts, the company is trying out two models, presumably to see which one will gain more traction. While Facebook wants to charge me two dollars per post for the privilege of highlighting a post, Deb paid nothing to put her client’s update at the top of their friends’ news feeds. Facebook is no doubt hoping to establish how many people are likely to be willing to pay for the feature and comparing that revenue against the associated increase in traffic.

So what do you get for your money? Not, at first blush, an enormous amount — a highlighted post stands out in a news feed thanks to a yellow background. Or perhaps not. Some Facebookers report seeing highlighted posts pinned to the top of their news feeds; in my news feed highlighted posts are indistinguishable beyond the word “highlighted.” And as far as I can tell, Facebook’s iPhone app has no way of identifying highlighted posts yet. But if Deb’s experience is in any way typical (and, of course, we’re assuming here that highlighting a post was, at the very least, a contributing factor in its virality), then it’s money well spent. And of course, it’s almost certain that if highlighted posts become commonplace, they
too will fade into the background of social chatter noise.

Facebook is saying nothing so far about when this new functionality might makes its way around the world, or whether it will be paid or free. For now, they appear to be detecting potential guinea pigs by New Zealand IP addresses, but, interestingly, still honouring our currency preferences; knowing that I’m British, Facebook wanted to charge me £1.29. Why Facebook chose New Zealand as a testing ground remains unclear — perhaps Mark Zuckerberg is a massive Lord of the Rings fan, or perhaps we’re an English-speaking market
that’s just the right size for a test.

But for now, a couple of dollars is a small price to pay to become, as Deb’s grateful boss put it, the queen of social media for a day.