On the heels of a rash of WWDC announcements, Apple quietly slipped out a major revision to the AirPort Express Base Station that dramatically improves its usefulness while leaving the price at $99. The new model brings simultaneous dual-band support to the device, and shrinks it to precisely the same size as an Apple TV: 3.9 inches (98mm) square by 0.9 inches (23mm) tall. (The Apple TV is a bit heavier.) Apple is clearly engaging in some benefits of scale by switching its power adapter-like AirPort Express case design with one that is identical to the Apple TV. They’ll stack and pair nicely. There’s one difference: The Apple TV
is black and the AirPort Express (like all Apple Wi-Fi devices) is white.

The new model also finally has two Ethernet ports: one for a wide area network (WAN) and the other for a local area network (LAN), replacing the single dual-purpose jack in the previous models. The Ethernet ports are both only 10/100 Mbps, about which I have reservations, discussed later in the article. 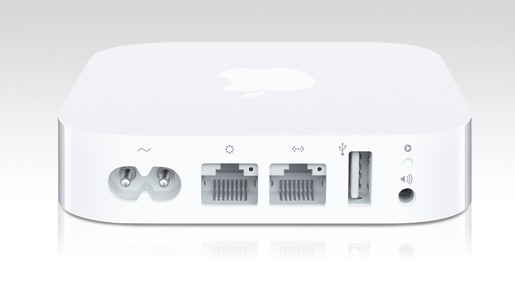 (Before you ask, I won’t need to do an extensive update to the “Take Control of Your 802.11n AirPort Network, Third Edition” that we just revised to cover AirPort Utility 6.0 and AirPort Utility for iOS; see “‘Take Control of Your 802.11n AirPort Network’ Updated,” 24 May 2012. All the advice that applies to an AirPort Extreme, except for attaching peripherals via USB, now applies to the AirPort
Express as well.)

However, the AirPort Express had three unique features. First, it had (and still has) an audio output jack with both analog and digital optical (TOSLINK) capability. The audio jack streams music from iTunes using what was once called AirTunes (for audio only), and now is part of AirPlay (which handles audio and video). Second, the AirPort Express sported a USB port into which you could plug a single printer to share across a local network. A third, less well-known and less-used feature was an option to make the AirPort Express act like a Wi-Fi adapter to extend a network just for Ethernet and audio streaming. That appears to have been removed in AirPort Utility 6.0.

In 2007, the AirPort Extreme gained 802.11n support, the latest flavor in a series of Wi-Fi updates; a year later, the Time Capsule debuted with 802.11n as well. Both could use either the 2.4 GHz or the less-used 5 GHz band with 802.11n, which supports both frequency ranges, but switching between bands required restarting the base station. Both also included USB from the start, with the option to attach a hard drive or printer, or to connect a USB hub and then plug in multiple drives and printers. In 2008, Apple updated the AirPort Express to support single-band 802.11n, but left the USB limit of a single printer in place.

In 2009, the AirPort Extreme and Time Capsule received another big boost: simultaneous dual-band support. You no longer needed to choose a band nor buy multiple base stations to support older devices that could use only 802.11b or 802.11g in 2.4 GHz, or newer devices, like all iPhone and iPod touch models, that support only 2.4 GHz for 802.11n. (All iPad models and all Macs released since 2006 can work over either band.)

The AirPort Express languished. At $99, it was cheaper than the $179 AirPort Extreme and the Time Capsule (priced at $299 and $499, depending on drive capacity, even as the two drive sizes have been upgraded twice since introduction). But it still had a niche because of its compact size and audio output capabilities, as well as being able to extend Wi-Fi to hard-to-reach nooks in a house or office. I receive questions from TidBITS readers and owners of my Take Control book nearly every week about how to use the AirPort Express to extend networks and stream audio.

Back to the Present — This update brings two changes beyond the radio improvement. First, the switch to two Ethernet ports, one for WAN and one for LAN, enables you to use the AirPort Express as your sole base station on a mixed Ethernet/Wi-Fi network. Second, having a flat, compact external power cord, instead of an integral one (unless you bought a kit, discontinued last year) makes it much simpler to position an AirPort Express at home or while traveling.

My sole gripe with the revised AirPort Express is its continued use of 10/100 Mbps Ethernet, even though it now has separate ports for WAN and LAN. This outdated standard is also found on the Apple TV, where it makes sense, as one doesn’t need anything like 100 Mbps to stream video to the device. But on a router, it’s a little frustrating.

Ostensibly, and this is testable, Apple hasn’t limited speed for intra-wireless connections. That is, one should be able to use the full raw 75 Mbps and 300 Mbps bandwidth in 2.4 and 5 GHz among devices using either band (true throughput is closer to 30–40 Mbps and 100–150 Mbps, respectively). Likewise, you can plug an inexpensive gigabit Ethernet switch into the AirPort Express’s LAN port and have full gigabit throughput available among wired devices. The limit affects only those rare people who enjoy greater than 100 Mbps throughput to the Internet and those who use the wireless-to-Ethernet crossover, where you are transferring lots of data regularly between wired Ethernet and wireless Wi-Fi devices.

Even without testing the updated unit, I am sure it will be a big hit for folks for whom $179 seemed too high, and who were thinking about purchasing a less-expensive router from another maker, or who want to buy and set up an inexpensive, hassle-free AirPort base station for friends or relatives. This Ethernet port improvement and effective price drop make it affordable to stay in the Apple fold for ease of setup and configuration, plus full support for all things Apple.

I can envision a future merger of the Apple TV and AirPort Express by way of adding an HDMI port to the AirPort Express and relying on an A5 processor to handle video streaming and wireless routing at the same time. They both use the same form factor and connect to consumer electronics devices; a merger is as logical as the Time Capsule’s combination of backup drive and base station.