As Apple introduced the changes to the existing 13- and 15-inch MacBook Pro models (detailed below), you could feel disappointment ebb outward from the WWDC conference hall. Although the new specs are good news for some people, that announcement turned out to be a clever bit of misdirection for the more dramatic reveal: an all-new 15-inch MacBook Pro, featuring a slimmer body design, all-flash memory storage, and a Retina display — which Apple is cleverly calling the “MacBook Pro with Retina Display.” (Yes, as with so many of Apple’s recent naming decisions, we hate the name, too.)

Retina and Design — The 15.4-inch Retina display features a resolution of 2880 by 1800 pixels at 220 pixels per inch, or more than 5 million pixels total. To compare, the third-generation iPad’s Retina display includes over 3 million pixels, while the iPhone 4 and 4S boast 614,000 pixels. Apple says the screen isn’t just higher resolution, but also higher quality, with deeper blacks, a 29 percent higher contrast ratio, and a 75-percent reduction in glare (while still being a glossy screen). It uses in-plane switching (IPS) technology to provide a 178-degree field of view.

Mac OS X Lion has been updated to handle the higher-resolution display, as have Mail, Safari, iMovie, and iPhoto (although those updates were not yet available at press time). Apple also showed off improved versions of Aperture and Final Cut Pro X that take advantage of the new display. 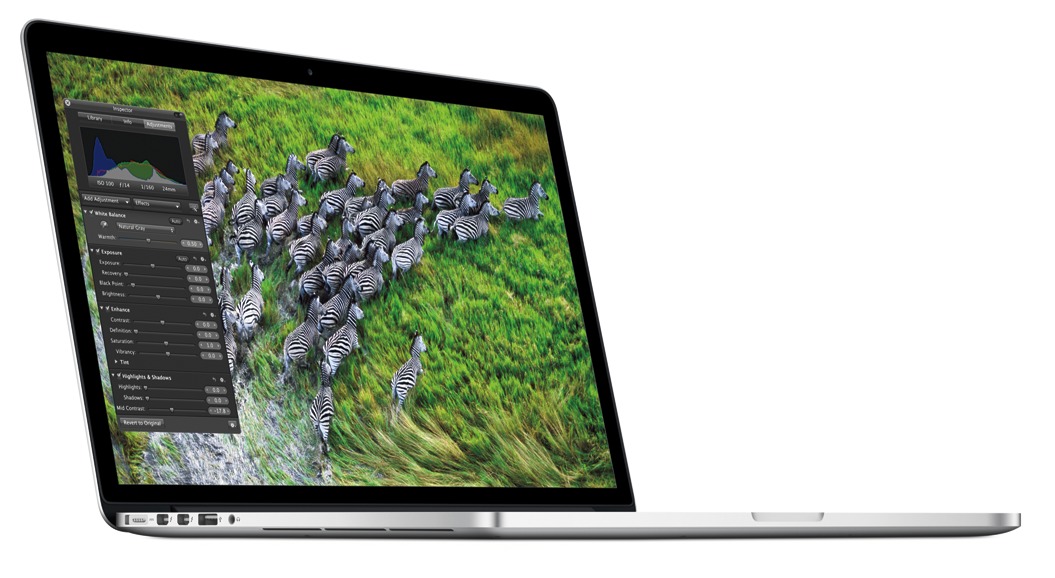 In the promotional video about the new MacBook Pro, Apple touts several unique design decisions. For example, most of the internal parts are designed by Apple, including fans with asymmetric blades that purportedly reduce noise while they’re pushing heat out of the machine.

Processors and Power — Apple is positioning this new laptop as more pro than the other Pros, with an all-flash storage architecture for improved speed. It includes 8 GB of 1600 MHz DDR3L memory, configurable up to 16 GB, and either 256 GB or 512 GB of flash storage; on the high-end configuration, that capacity can be bumped up to 768 GB (for an extra $500).

The Retina display MacBook Pro models all sport a quad-core Intel Core i7 processor with 6 MB of shared L3 cache. The MacBook Pro can either come with a 2.3 GHz or 2.6 GHz processor. An upgrade to a 2.7 GHz processor is available on the high-end configuration for an extra $250.

In terms of other processing power, both configurations include onboard Intel HD Graphics 4000 and discrete Nvidia GeForce GT 650M (1 GB of GDDR5 memory) graphics processors. The laptop automatically switches between the two modes depending on what’s required by running software. (See “Improve MacBook Pro Battery Life with gfxCardStatus,” 21 February 2011, for an explanation of how graphics switching works and to learn about a great utility for monitoring and controlling it.)

The built-in battery can operate the machine for up to 7 hours, according to Apple, with 30 days of standby time before being depleted.

Ports of Call — The Retina display MacBook Pro includes two Thunderbolt ports and two USB 3.0 ports, a headphone port, and an SDXC memory card slot. New to the line is an HDMI port, as well as dual microphones.

An interesting change is a new MagSafe 2 connector for providing power (since when did power plugs get version numbers?). It appears the new connector is slimmer than its predecessor and incompatible with previous MagSafe adapters, but no other details were forthcoming; if you’re hoping to use a regular MagSafe cable to power the new MacBook Pro, Apple is happy to sell you an adapter for $9.99.

Also interesting is what’s missing. Gone is the Ethernet port (a Thunderbolt-to-Gigabit Ethernet adapter will be available in July 2012), audio line-in, and, most significantly, an optical drive. If you need to write data to disc or rip music or movies, you’ll need to buy Apple’s USB SuperDrive. The lack of an optical drive makes this MacBook Pro more Air-like than other models. The main difference now appears to be the tapering case as a Retina display could be added to a future MacBook Air.

Pricing and Availability — The 15-inch MacBook Pro with Retina Display is available today in two stock configurations: a 2.3 GHz processor for $2199 or a 2.6 GHz processor for $2799. The machine ships with Mac OS X 10.7 Lion, but can be upgraded to OS X 10.8 Mountain Lion for free when that version ships in July. A fully loaded MacBook Pro, with every build-to-order processor, memory, and storage upgrade, will run a hefty $3749.

The Other Guys — I mentioned the other MacBook Pro models earlier, which are now distinctly second-class citizens. The 13-inch and 15-inch models gain USB 3.0 ports, the capability to swap in a 1 TB hard drive or up to 512 GB solid-state drive (depending on model), Intel Core i5 or i7 processors, up to 1 GB of video memory in Nvidia GeForce GT 650m graphics processors, and up to 8 GB of 1600 MHz DDR3 memory. They also get the 720p FaceTime HD camera. Perfectly nice upgrades, of course, but it may be worth spending roughly $400 more for the new MacBook Pro with Retina Display, given its vastly more
impressive screen and lighter weight. Oh, and the 17-inch MacBook Pro? It’s now an ex-MacBook model.