IPv6 has returned to AirPort Utility by popular demand, a reversal of its removal in the recently released version 6.0. The next-generation addressing system for the Internet, which replaces the empty pool of familiar IPv4 numbers (of the pattern 192.168.0.1), is required for the Internet to continue functioning. ISPs, network hardware providers, content sites, search engines, and groups that form the backbone of the Internet’s infrastructure policy groups are all agreed.

The Internet Society (the folks behind the IETF and RFCs) even drew a worldwide line in the sand on 6 June 2012, not just to test IPv6 in a widespread fashion, as in previous years, but also to keep everything active from that point on and continue to expand the use of IPv6 for ordinary users, who shouldn’t have to sweat the details.

IPv6 is necessary because IPv4 simply doesn’t have enough addresses to encompass the many billions of devices that require Internet access — and that’s just today. In the future, every mote of smart dust might need an IP address. While NAT (Network Address Translation) enabled IPv4 to limp along for years, aided by a number of other behind-the-scenes tricks, IPv6’s vastly larger set of possible addresses (3.4 x 10^38) is the only real solution.

It has been over a decade since IPv6 became standardized, but 2012 is the year in which IPv6 has finally hit the flashpoint for adoption: IPv4 addresses are essentially exhausted (trading is still going on) and IPv6 infrastructure is ready but needs real-world commitment to bring about full operational equality with IPv4. Even if things break a little, IPv6 must be pushed forward. (The reason it has taken so long? There’s no financial reward, only a cost, in switching. It’s inevitable, but that money has to come out of somebody’s budget in every organization.)

That’s why it was so strange that Apple dropped IPv6 support in the housecleaning that resulted in AirPort Utility 6.0; the AirPort Utility iOS app never had it. While many of the features removed from AirPort Utility 6.0 impacted only network administrators, very few of whom use Apple Wi-Fi gear any more, IPv6 has a broader impact. Apple built it into Mac OS X years ago, and it has been fully supported in iOS from the start. Removing IPv6 support in AirPort Utility meant that broadband modems plugged into newly configured AirPort base stations couldn’t hand off IPv6 information to the base station nor to other devices on the same network. That’s a problem. (See “AirPort Utility 6.0
Adds iCloud Support but Removes Many Features
,” 1 February 2012, for more details about the iOS app and the 6.0 changes.)

But IPv6 is back! On the heels of many WWDC announcements, including a quiet overhaul of the AirPort Express Base Station (see “AirPort Express Turned into Simultaneous Dual-Band Hockey Puck,” 11 June 2012), Apple released updated Mac OS X and iOS versions of AirPort Utility. The primary reason was to add support for simultaneous dual-band networking in the new AirPort Express, which appeared in AirPort Utility 5.6.1 for 10.6 Snow Leopard and 10.5 Leopard. (All 5.x versions of AirPort Utility include IPv6 configuration, and 5.x versions continue to work with all released AirPort base stations starting with 2003 models.) 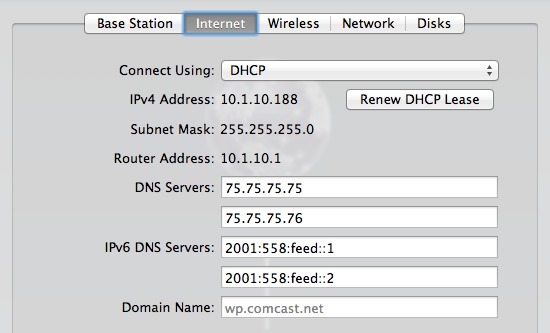 The Internet Options dialog includes a Configure IPv6 pop-up menu that lets you choose from Link-Local Only (use only on local network), Automatically (pick up via DHCP from the broadband connection, like an IPv4 address), or Manually (requires specific address entry).

For all but Link-Local Only, you can select Native or Tunnel, which refers to how the IPv6 connection is made. A native connection provides IPv6 service to all devices on the network; a tunneled connection encapsulates IPv6 traffic at the router and wraps it up to carry across an IPv4 segment of the network to reach a fully native IPv6 backbone. That’s a little technical, I know, but it might help you talk to your ISP or other service provider when trying to enable IPv6.

IPv6 isn’t the most exciting technology in the world. If you’re not involved in Internet infrastructure or IT, it’s like listening to sewer engineers talk about the kind of plastic used in outflow pipes. But IPv6 is a necessary part of making sure the Internet continues to work. The bits must flow!