While the most important aspect of MobileMe going dark for iWeb users is getting your site hosted somewhere else, it’s clear that iWeb itself is hanging on by only a thread as well. So the need to move your iWeb-based Web site somewhere else is a good excuse to get away from iWeb too, and to make that easier, Karelia Software has just updated their Web site authoring tool, Sandvox.

I won’t get into Sandvox’s features in detail, but suffice to say, while it predates iWeb, it’s now designed to do everything iWeb can do and more. (Karelia has had the dubious distinction of being stepped on by Apple not once, but twice, first with Sherlock 3 appearing to compete with their Internet search tool Watson and then with iWeb competing with Sandvox.) Sandvox offers a drag-and-drop interface for creating entire Web sites — complete with blogs, picture galleries, social media integration, and more — all without coding in HTML. Once you’ve designed your site, Sandvox generates it using HTML5, and makes sure the code is compatible with all
major browsers on the Mac and PC, and with mobile devices.

What’s new in Sandvox 2.6 is the capability to extract content from existing iWeb sites. Note that Karelia is careful to avoid the term “import” since Sandvox cannot — technically or legally — import iWeb sites. (Technically it’s hard because iWeb does some funky stuff with the HTML code, and legally it’s impossible because iWeb templates are copyrighted by Apple.)

Instead, when you point Sandvox at an iWeb-generated site, Sandvox crawls the entire site, extracting good-sized chunks of text and large graphics and adding them to a new Sandvox document. (You can even watch it doing this, which is pretty cool.) It will not create a site that looks like your existing iWeb site, but the same basic structure and content should be present for you to manipulate, tweak, and even improve within Sandvox. Karelia has posted a detailed, FAQ-based guide to transitioning an iWeb site that should explain exactly what you can expect. (As a dirty little secret, Sandvox can extract content in this way from any site, but it’s tweaked
to work best with iWeb-created sites.) 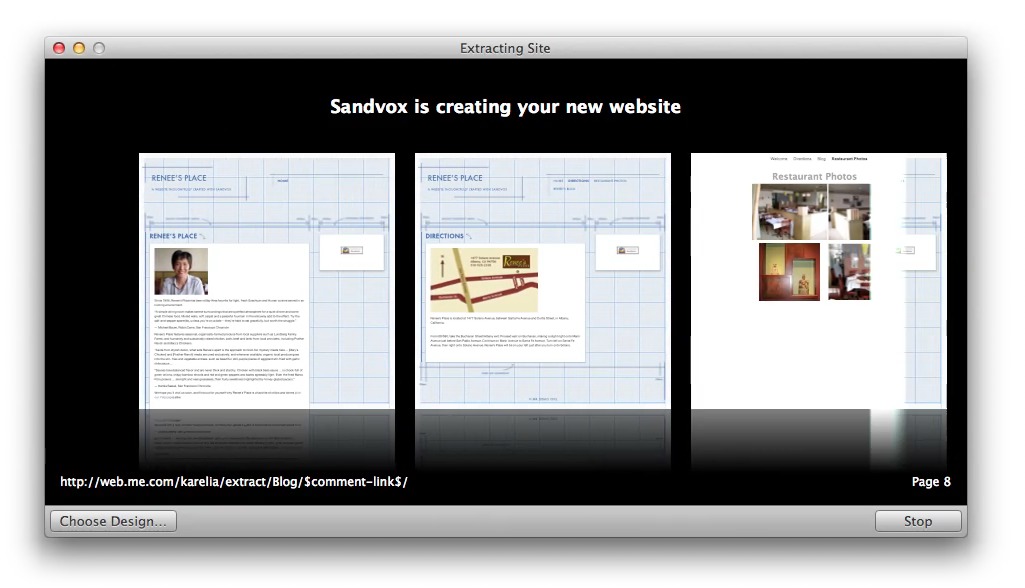 Much as I know being forced to make transitions like this is a pain, I think this one is worth looking at a little differently. Web design is an ever-evolving art, and if you created a site in iWeb a few years ago, when Apple was still maintaining the program, it’s a few years out of date. Sandvox has been updated that entire time, so by refactoring your site in Sandvox, you’ll get not only the advantage of working with a modern, more-capable tool, you’ll get a site redesign in the process. (We run into this every
few years ourselves. We’re in the middle of a major site redesign for Take Control, and once that’s done, we’ll probably be turning our attention to TidBITS too, since what we did a few years back doesn’t have that fresh feel any more.)

Sandvox 2.6 works in Mac OS X 10.6 Snow Leopard and later, and has been localized to French, German, Italian, Japanese, Spanish, Brazilian Portuguese, and Simplified Chinese. (The Japanese localization is also new in 2.6.) It costs $79.99 for a single copy, or $119.99 for a household, with site licenses running $39.99 per seat. A free trial version is available. Although Sandvox is available in the Mac App Store, I recommend you buy directly from Karelia so the company keeps more of the revenue and can more easily provide you with support, should you need help.