As the MobileMe sunset date of 30 June 2012 draws ever closer, people continue to look for ways to integrate Macs running Mac OS X 10.6 Snow Leopard into the iCloud ecosystem. Despite the fact that Apple based iCloud on standards like CalDAV and CardDAV, this hasn’t been entirely trivial. With calendars, we’ve written about two solutions: BusyCal (“BusyCal Brings iCloud Calendars to Snow Leopard,” 5 December 2011) and iCal (“iCal in Snow Leopard Can Participate in iCloud,” 11 December 2011). But good solutions for syncing contacts with iCloud have been harder to find, since the tricks that worked with pointing iCal at iCloud failed
with Address Book.

Happily for those who have perfectly functional Macs still running Snow Leopard, for whatever reason, we’ve come across a way of syncing contacts with iCloud. It’s not free, but it is easy — the $99 SOHO Organizer 9 from Chronos. This capability is relatively new to SOHO Organizer, appearing in version 9.1.8, but Chronos has been refining it since introduction — the current version is 9.2.6. In fact, SOHO Organizer requires only Mac OS X 10.5.8 or later, making it useful for anyone who wants to access iCloud contacts on a Mac that can run any version of Mac OS X from 10.5 Leopard to 10.7 Lion (and, we presume, but have not tested, 10.8 Mountain Lion).

SOHO Organizer is actually a three-application suite consisting of SOHO Organizer, which offers contact and calendar management; SOHO Notes, a note-taking and snippet-keeping utility; and SOHO Print Essentials, which helps you design and print labels, envelopes, letterhead, and so on, importing data as necessary from SOHO Organizer. I won’t be talking about SOHO Notes or SOHO Print Essentials — they seem to be effective programs, but are out of scope for this article.

And as a final caveat, I’m assuming that you have already converted your MobileMe account to iCloud and are merely trying to gain access to your iCloud contacts on a Mac running Snow Leopard. If you need help making that conversion, run, don’t walk, to get a copy of Joe Kissell’s “Take Control of iCloud,” which explains in detail what’s involved.

Setting Up and Using SOHO Organizer for Contacts — Despite the many other capabilities of the SOHO Organizer suite, setting it up for syncing contacts with iCloud is trivially easy. All you have to do is open the Preferences window, click Accounts, click the + button to add an account, choose iCloud Contacts, and enter your iCloud user name (as a full email address) and password. SOHO Organizer fills in the rest of the details behind the scenes, makes the connection, and downloads all your contacts. 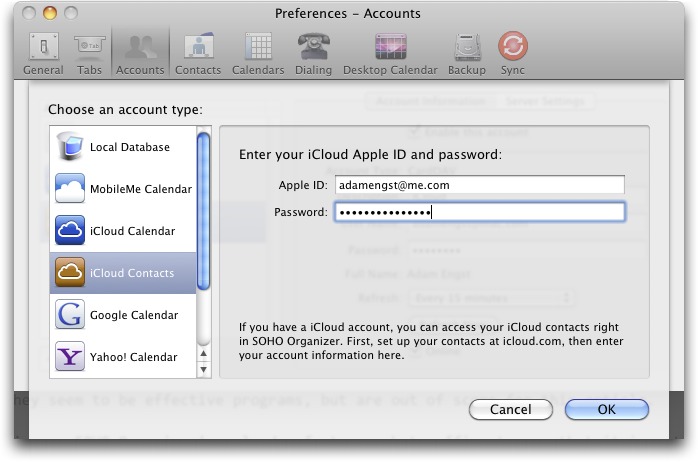 I’ve never been a fan of Address Book in general, and I hate the leatherette version in Lion with a passion, so I find SOHO Organizer’s approach to displaying contact information refreshingly complete and usable. A series of buttons in the upper-left of the window let you switch between contact (the first two), calendar (the next five), and journal (the last one) views. The Contact Card view shows detailed information for a single contact that you display by selecting a group and then a name in the first
two columns. The data includes everything you’d expect, in terms of name, address, phone numbers, email addresses, instant messaging accounts, birthday, and relationships, and an attachment block that can contain a list of email messages to and from that person, along with phone calls, text messages, calendar events, notes, files, and more. You can add some additional blocks, such as for URLs, more addresses, notes, and so on. Plus, you can even switch to an expanded version of the name block, which adds fields for prefix, suffix, middle name, nickname, job title, department, phonetic names, and maiden name. 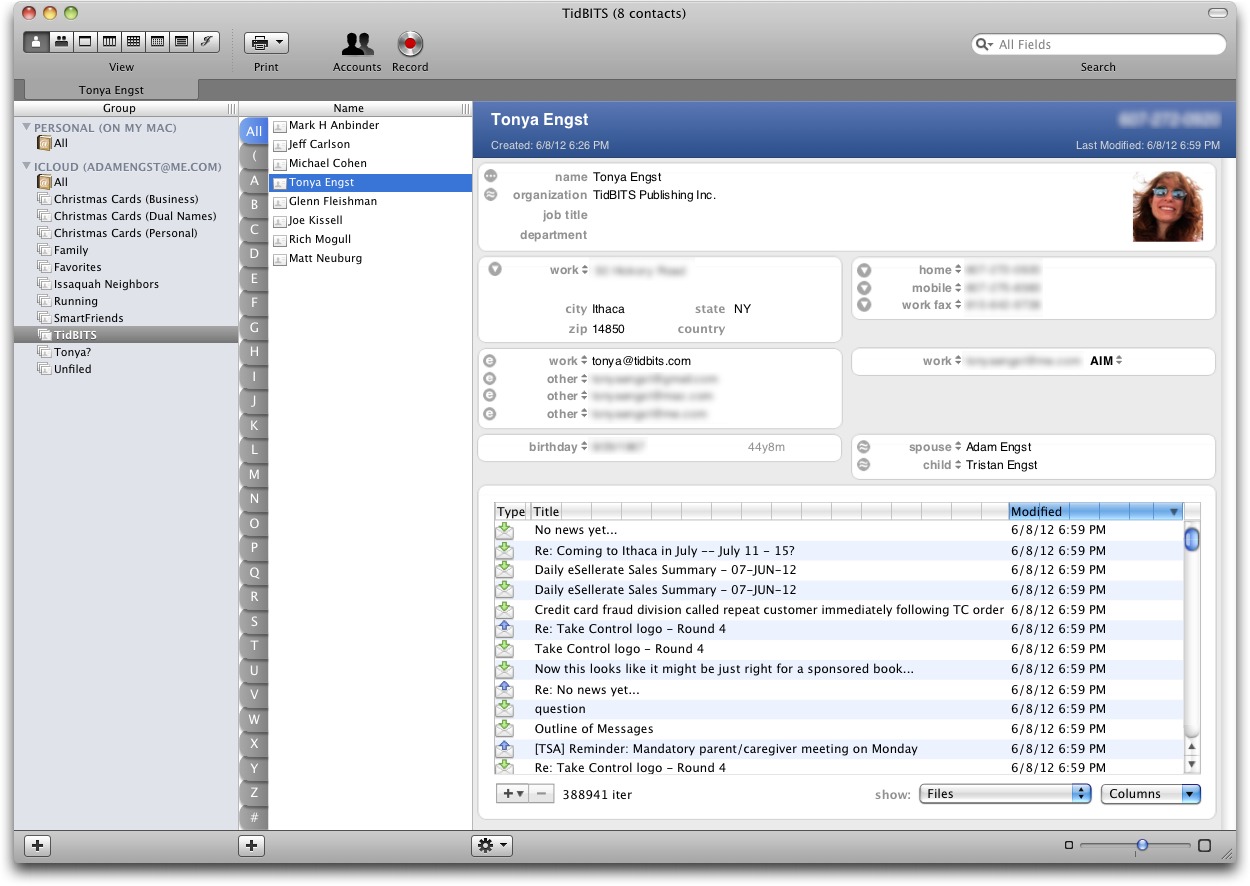 Much of this data is “live,” in the sense that you can click a little icon next to an email address to create a new message to that address, and clicking the icon next to a spouse or child name switches to that person’s card. Other actions include mapping an address, calling a phone number, and sending an SMS message. You can also double-click email messages and other items in the attachment list to open them.

Along with the Contact Card view, there’s Contact List view, which displays all the contacts in a particular group in a scrolling list, with numerous columns available; you choose which to display from View > Contact List Columns, and you can rearrange them by dragging, resize them, and sort them (Shift-click for a secondary sort, such as Last Name, then First Name). Double-clicking data in a list item lets you edit it directly, and you can click the Open in Contact Card button to switch to the detailed Contact Card view.

SOHO Organizer has a few other niceties related to contacts. You can search for duplicate cards and information within cards. It’s easy to merge cards, with a nice display of the differences. You can also create bidirectional relationships between people by dragging one person’s card onto another; this enables you to identify someone as another person’s spouse, child, manager, assistant, and so on. For faster navigation in Contact Card view, SOHO Organizer offers an Alphabet Bar that lets you jump quickly
to contacts whose last names start with a particular letter. Lastly, you can open multiple windows so you can see both Contact List and Contact Card views simultaneously, or just multiple cards.

The main negative I see with SOHO Organizer and its traditional approach to contact management is that it has no concept of connecting to Facebook, Twitter, LinkedIn, or other social networking services, as does the recently released Cobook (see “Cobook 1.0,” 25 May 2012). I also experienced a few performance issues on (only) one of my test Macs, though they may have been related to specific zoom levels or database corruption that was resolved by starting over; Chronos was extremely responsive to my reports, and version 9.2.7 should be available shortly with minor changes.

No Link to Address Book — Despite SOHO Organizer working perfectly with iCloud-hosted contacts, bringing in and sending out changes appropriately, there’s one major limitation for those running under Leopard or Snow Leopard that may not be obvious up front, but which could be a deal-breaker. The contacts that SOHO Organizer retrieves from and syncs with iCloud appear in an iCloud collection in the sidebar, and only there. That’s all that’s necessary for people running under Lion.

But what if you want to access those contacts in the Leopard or Snow Leopard version of Address Book, or in another program like Cobook or Apple Mail that shares Address Book’s data store in a pre-Lion system? There, unfortunately, your luck has deserted you. SOHO Organizer has another collection in the sidebar — Personal (On My Mac) — and any contacts in there do use Snow Leopard’s Sync Services to sync with Address Book and all other Address Book-aware programs.

You can select all your contacts in the iCloud collection and drag them into the Personal (On My Mac) group to copy them over, at which point they will appear in Address Book (beware that corruption in field labels can prevent syncing — if this happens to you, sync smaller groups at a time to find the problematic contact). That will give you read access to those contacts, but what you can’t do is make changes and have them sync back to the iCloud collection in any way. I tried dragging them back from Personal (On My Mac) to iCloud, but that tended to result in the iCloud version of the contact being corrupted or deleted. Even if it had worked, it’s an unsatisfactory solution, since it would require both manual
copying of cards and then a lot of manual verification of data and determining what was old and what was new. That’s what we have synchronization tools for!

Theoretically, Chronos could add the capability to sync between the iCloud and Personal (On My Mac) collections, but given that it’s only of use to people who need this particular hack to access iCloud contacts in Address Book in Snow Leopard, it’s hard to see them justifying the engineering work.

In the end, though, SOHO Organizer is both a fully featured contact management program in its own right (not to mention its other capabilities) and a solution to the iCloud problem for Snow Leopard and Leopard users. That makes it well worth its $99 price. A 30-day trial version is available as a 77.6 MB download.