Among my friends, I’m known as a QR Code fanatic, which isn’t quite true. QR Codes are the most popular form of 2D tags, which use regions of dots or rectangles inside a shape (typically square) to encode information densely. QR Codes often encode a URL, but can also include text or an address card. You can see an example of a QR Code tag at the bottom of this article’s Web page, in fact.

These codes seem ridiculous to many. “I could just type in the URL,” folks say, which is true. But that means the URL has to be legible from where you stand or sit. It can be a hassle to type in complex URLs on a mobile device, especially short URLs that have text like “3jkx81klk” as part of the path. You might rather just walk away or snap a picture of the URL for later entry.

I think about QR Codes as analog glue between two digital media. I’m doing something in the world of atoms, and I want to translate it into bits. A QR Code is an efficient, if currently awkward, way of making that transition. QR Codes can also be tied to location. Some cities have added QR Codes to kiosks and signs because that lets someone get highly specific information related to the location in question.

My friends give me a hard time because I thought QR Codes were just around the corner from worldwide popularity (not just in Japan, where their usage originated) back in 2009. I wrote this Economist article in August 2009 about the growing market, and a number of deals with cellular carriers. I penned a follow-up in 2010, when I started seeing QR Codes everywhere, and they began to be included in TV ads. But QR Code use never ignited.

A colleague at the Economist just filed this update in June that says “just around the corner” appears to be here at last. Nearly every day, I see a story about where QR Codes have cropped up lately. For instance, Simon & Schuster, the large book publisher, has opted to put 2D tags on the back of every book. But despite these changes, I’ve changed my tune and I am now unconvinced, because too much friction remains.

The problem is workflow. In Japan, where a large percentage of the population uses a QR Code at least once a month, that was solved over a decade ago with agreements among advertisers, publishers, mobile carriers, and handset makers. Turning a QR Code into a URL or text on phones sold in Japan is a simple operation, as easy as pressing a single button if I understand it right.

In the United States and most other countries, that’s simply not the case. On my iPhone, to scan a QR Code, I have to unlock my iPhone, and then find and launch QuickMark, a $0.99 app from SimpleAct that can scan many barcode and 2D code formats, and can produce them as well. (The firm makes a free app, horribly titled Best Barcode Scanner, that has fewer features.) Once I’ve opened the app, a camera sheet has to come up, which can take several seconds, and then I have to center the 2D code on the screen. QuickMark automatically recognizes the code as soon as
it’s centered (most other apps perform analysis only when you tap a button). Then you can choose to open a URL if one is embedded.

But imagine an alternative that would change the way QR Codes are used with a single software update. 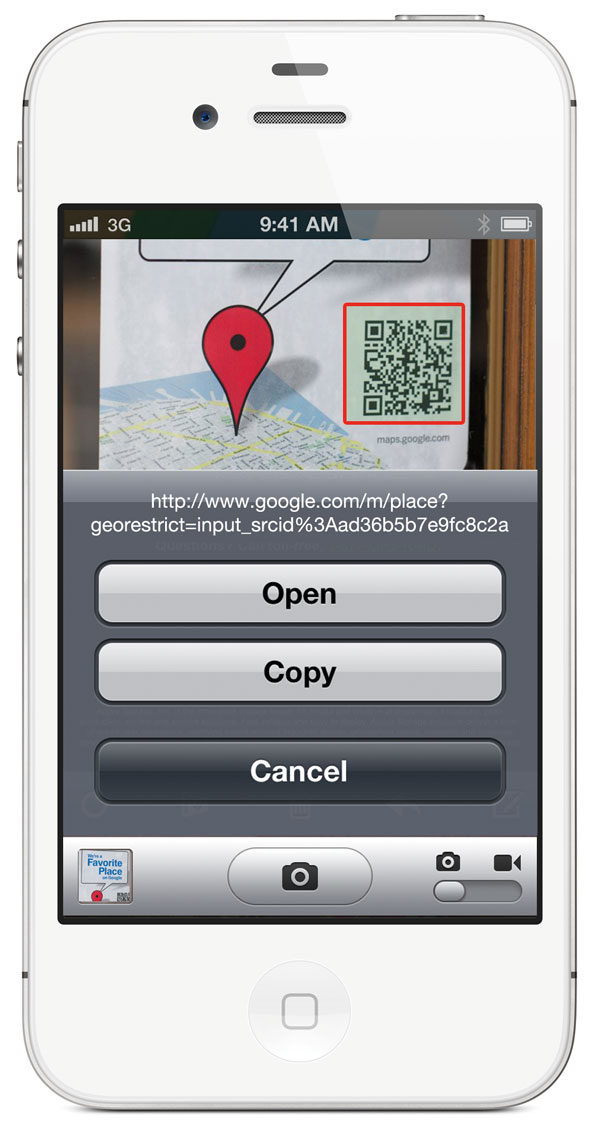 If the Camera app were revised to make this operation as simple as that, you’d be more inclined to start using QR Codes, wouldn’t you? Or does it still seem like an inane notion, and that typing in a URL is the better solution?

Who Needs the Code? — In the comments for this article, Lun Esex offered a perfectly brilliant suggestion. Why not just use OCR (optical character recognition) in the Camera app to read the URL’s text? I might have scoffed at this in the past, because of the complexity and computational burden, but there’s a perfect proof of concept: WordLens, a free app that performs live OCR coupled with statistical machine translation. It’s eerily good, even on older phones. (The app has language upgrades for $4.99 as in-app purchases.)

Lun is right. If the Camera app could be scanning for URLs and other useful information, such as phone numbers, addresses, and other formatted data, why would you ever need to use a QR Code or tap something in?