Podcatchers, the colloquial name for applications that subscribe to and download podcasts, come in all shapes and sizes. Apple provides podcatching services in the desktop version of iTunes while the iOS version provides only the capability to discover and download podcasts, not subscribe to them. This left room for third party innovation, and a number of apps appeared to fill this gap, such as Instacast and Downcast.

Last week, Apple followed the lead it set with the iTunes U app by releasing Podcasts, a universal app for the iPhone, iPod touch, and iPad that takes over podcast-related tasks from the overburdened Music app. The Podcasts app copies the podcasting section of the iTunes iOS app almost verbatim, while adding a player and the capability to subscribe to and automatically download shows.

The Podcasts app is organized into two main sections: the Catalog, where you discover podcasts, and the Library, where you listen to your subscribed and downloaded podcasts.

The Catalog — The Catalog is the “storefront” of the Podcasts app, displaying all available podcasts in the iTunes Store. This entire section is ripped directly from the podcasting section of the iTunes app. It lets you browse new and noteworthy podcasts, check out a “starter pack” of popular podcasts, look at the top-ranked podcasts, and scroll through oodles of podcasts in numerous different categories. 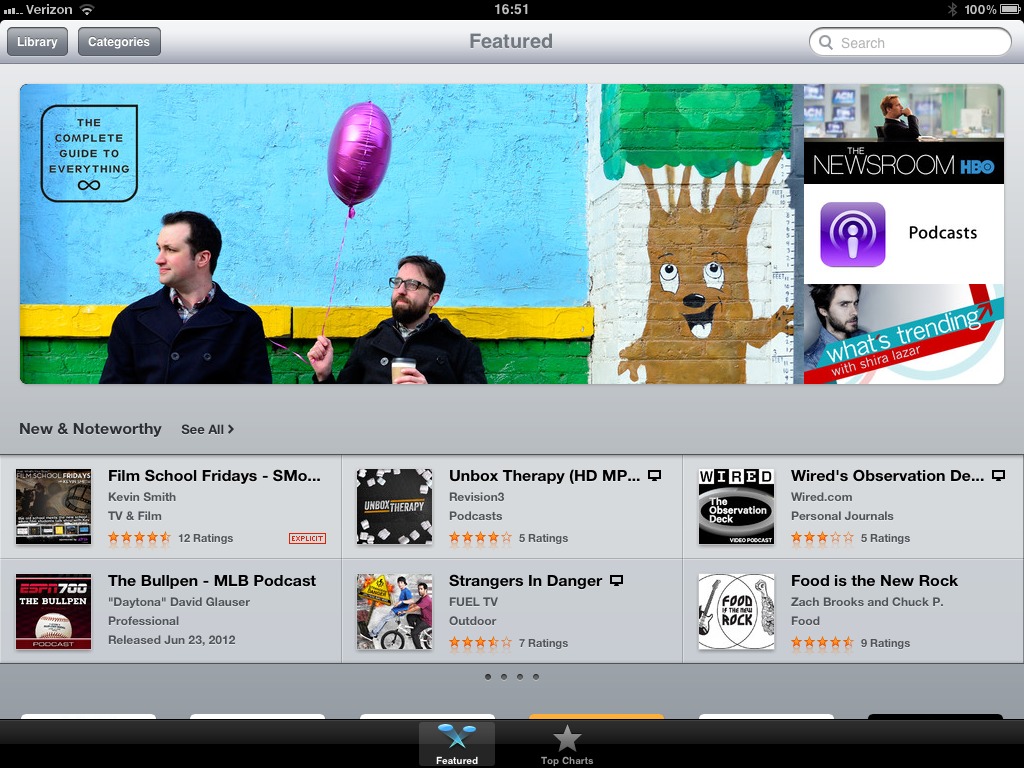 The big change is that now each podcast has a Subscribe button. Previously, you could view podcasts in the iTunes app, but you couldn’t subscribe to them. 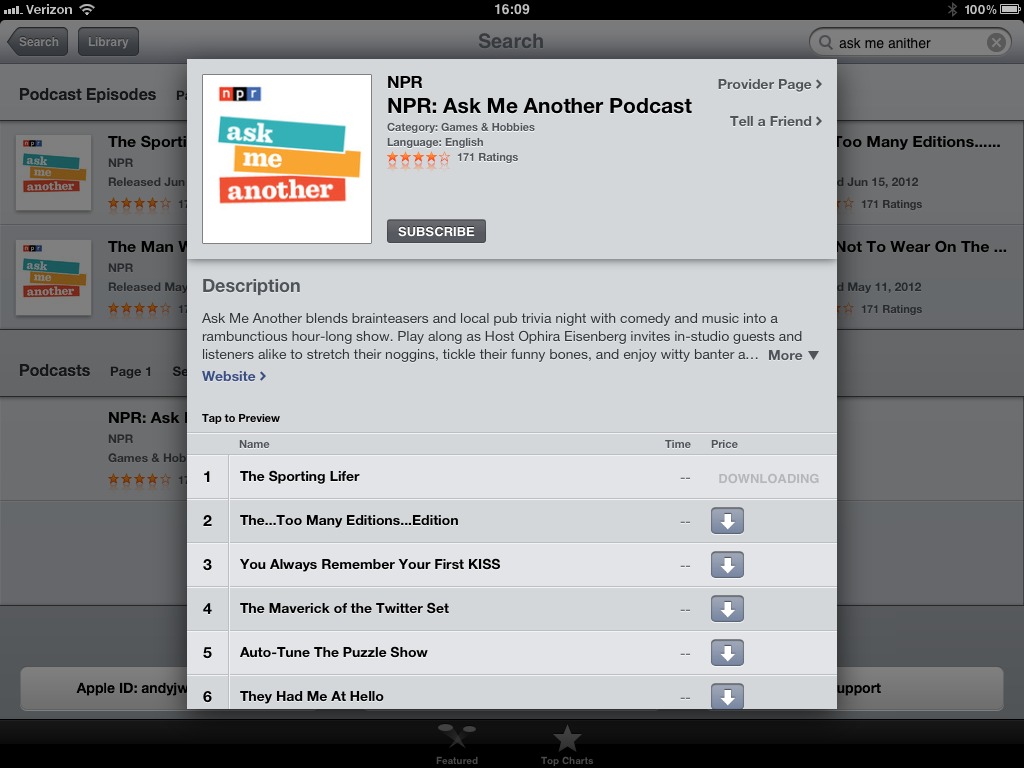 What’s not possible, albeit not surprising, given that Podcasts is a window to the iTunes Store, is the capability to subscribe to a feed via entering a URL, and the capability to subscribe to a podcast that requires authentication (such as for-pay podcasts). For those features, you’ll need to stick with whatever independent podcatcher you’re using now.

During my testing, I had some occasional performance problems in the Catalog. I would tap to look at the details of a podcast only to have it load the info slowly. Then, once it did, buttons to subscribe or to download a specific episode were non-responsive. At one point I rotated my iPad and waited over 20 seconds before the screen rotated to match the change in orientation. This happened sporadically, so other factors, notably Internet connection issues, may have been at work, but it was still disconcerting.

The Library — The Podcasts app’s Library contains all podcasts that you’ve either subscribed to or downloaded manually. Any podcasts in your Mac’s iTunes library that have been synchronized to the device also appear in the Library. Additionally, any episodes that you download manually in the Podcasts app will synchronize back to the desktop iTunes library. Subscriptions, however, are tracked only where they were made, on the iOS device or the desktop. It is possible to subscribe to a show in both locations, but as far as I can tell, each device tracks its own subscriptions independently. 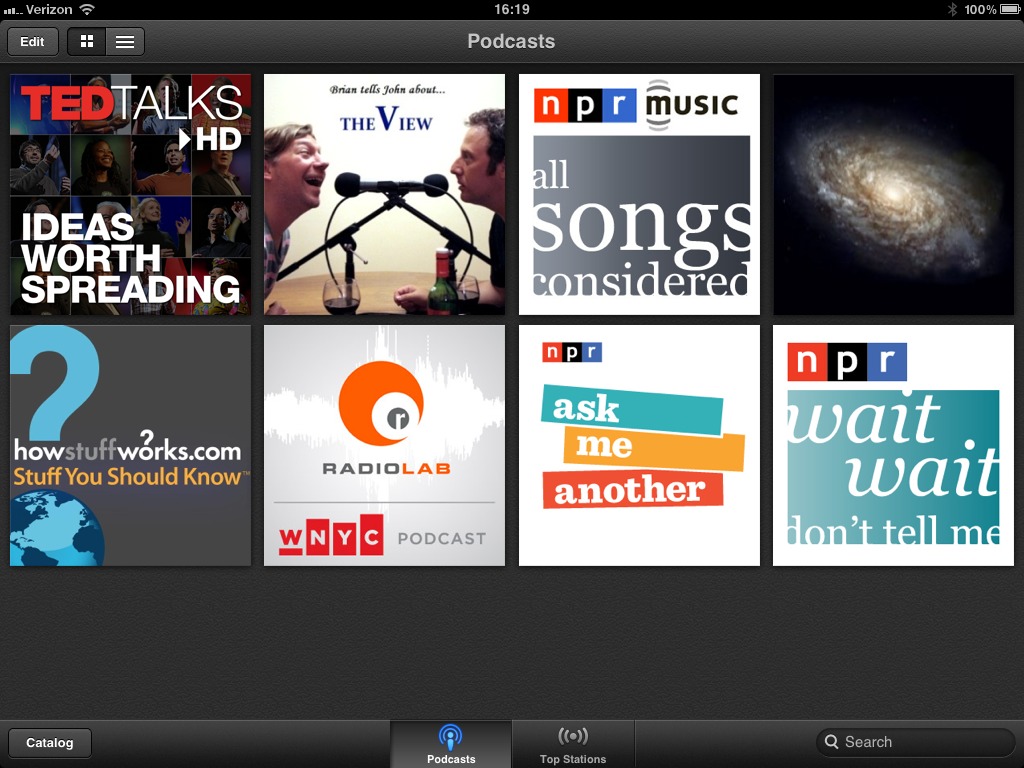 Within each podcast is a list of episodes ordered, by default, newest to oldest. With any new subscription in the app, only the most recent episode is marked as unplayed (with a blue dot). If the podcast has been synchronized from the desktop, any episodes marked unplayed on the desktop are marked unplayed on the iOS device. If the episode has not been downloaded, the Podcasts app will stream it — on Wi-Fi or cellular, provided that the cellular download option has been enabled (in Settings > Store)
and as long as the episode is under 50 MB in size. Episodes may also be downloaded for offline listening automatically, or manually by tapping the downward pointing arrow next to the episode.

Tapping the name of a podcast while looking at the episode list on the iPhone or iPod touch enables you to set some options (on the iPad, look for a gear icon in the top right). Options include turning subscriptions on and off, toggling auto-downloading of subscribed podcasts, changing the sort order of the episodes, and marking all episodes as played or unplayed. 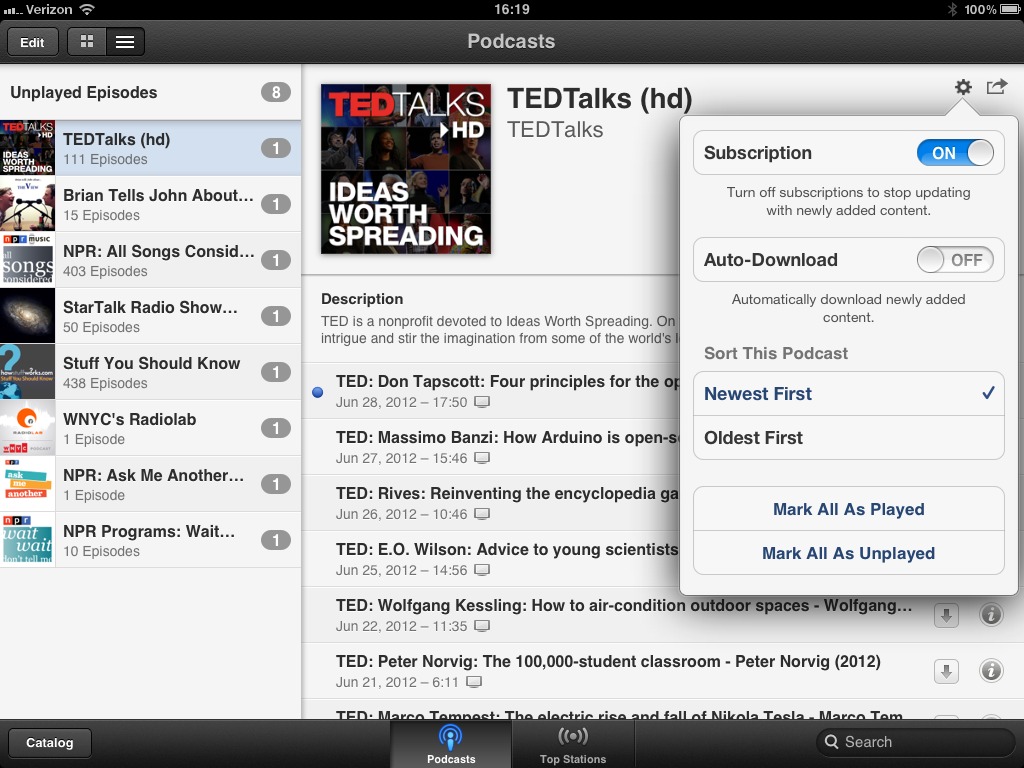 The Library has one other major section that’s largely incomprehensible: Top Stations. It appears to be an attempt to provide access to certain podcasts as if they were radio shows (complete with a user interface containing a dial at the top to move between genres). Cute as it is, it’s just another way to find podcasts, which begs the question: Why does Top Stations appear in the Library? How does it differ from the Top Charts listing already present in the Catalog? 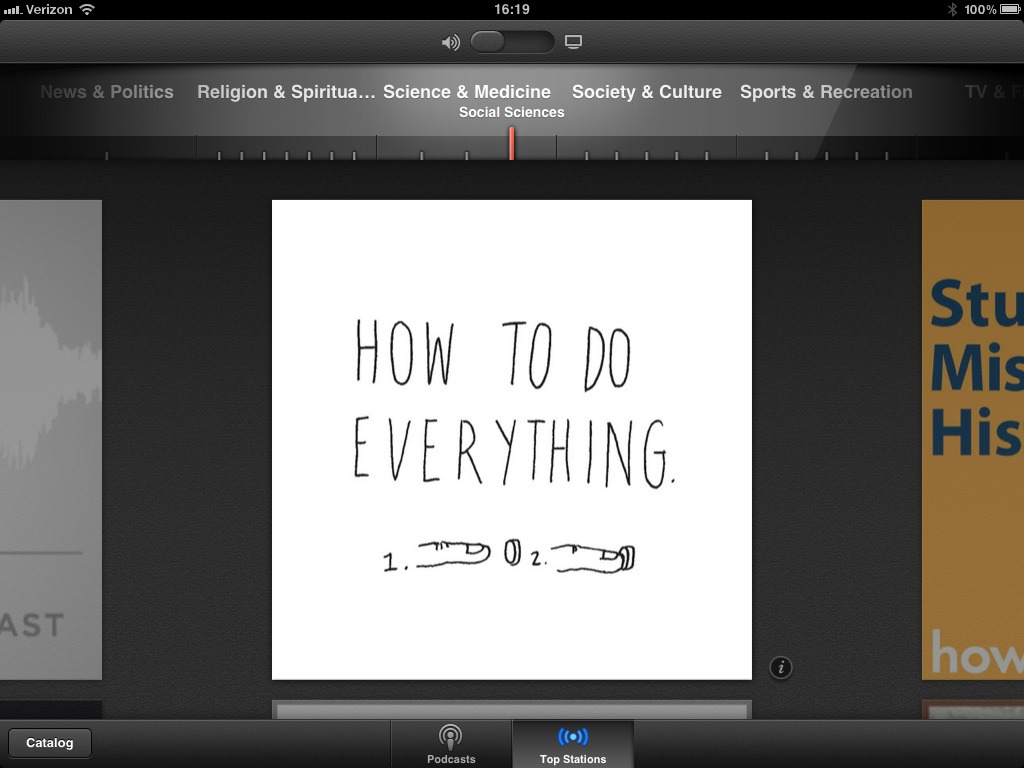 Regardless of what Top Stations is doing in the Catalog, it too suffers from poor performance, including locking up, an audio/video toggle that is woefully unresponsive, and cover art that refuses to load (and that cover art is the only way to know what shows are being displayed aside from a tiny info button that, like everything else in this part of the app, is often unresponsive). 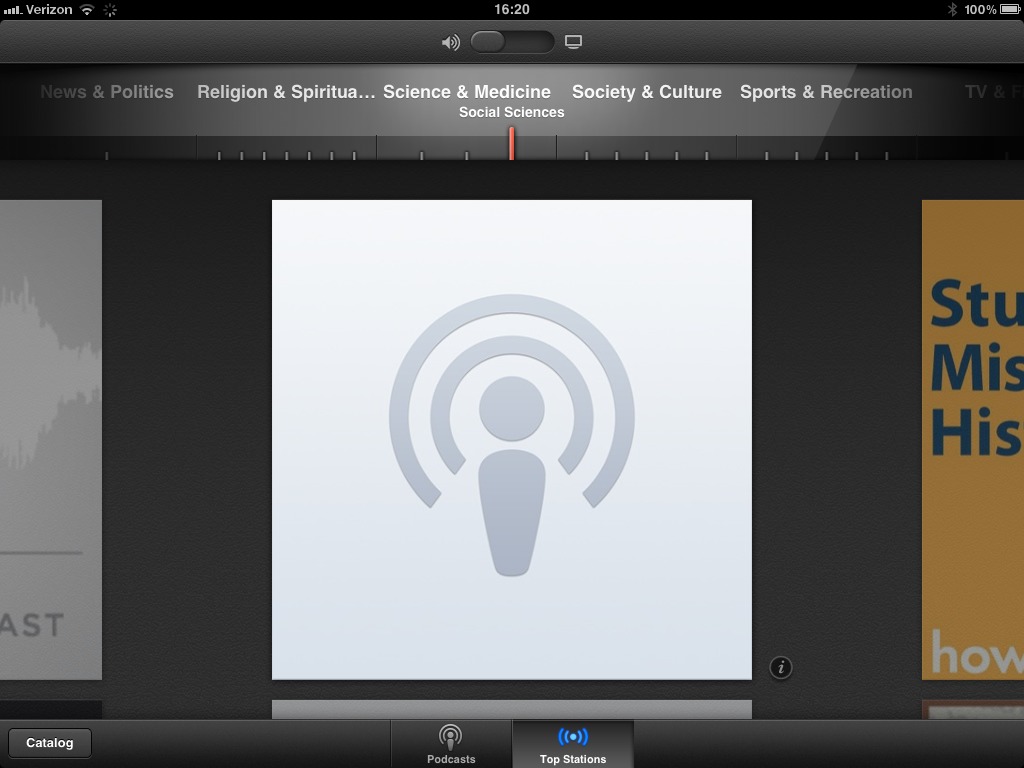 To make matters worse, when looking at the track list of a given show (after tapping the info button), the episode titles are often missing. In short, I found the Top Stations section to be useless and frustrating to use. Just ignore it and you’ll be better off. 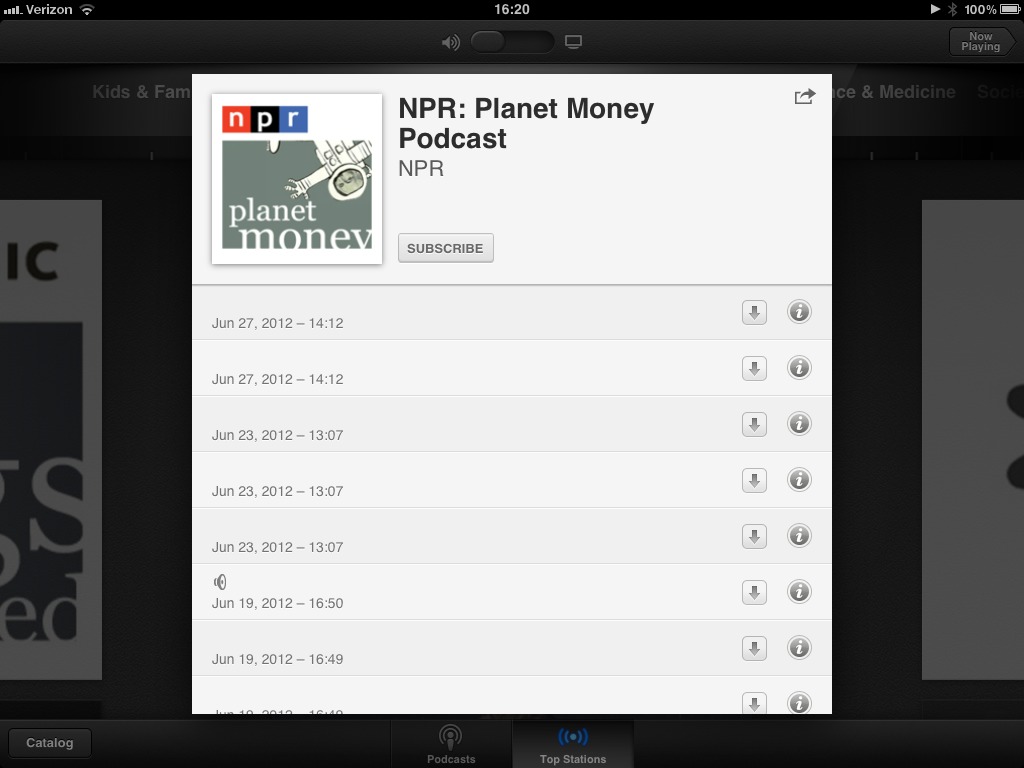 Although the Podcasts app offers all the necessary features for basic podcast use, it doesn’t venture into territory staked out by independent podcatcher apps, which include features such as automatic deletion of episodes after listening to save space, playlist creation to put together collections of podcasts, and more.

The Player — The Podcasts app provides an integrated audio/video player. It is visually pleasant and provides big buttons to handle the most common playback functions, including navigating between episodes, jumping back 10 seconds (for when you’re interrupted and miss something) or forward 30 seconds (to skip boring intros or ads) within an episode, pausing, and redirecting the audio and video to other devices using AirPlay. 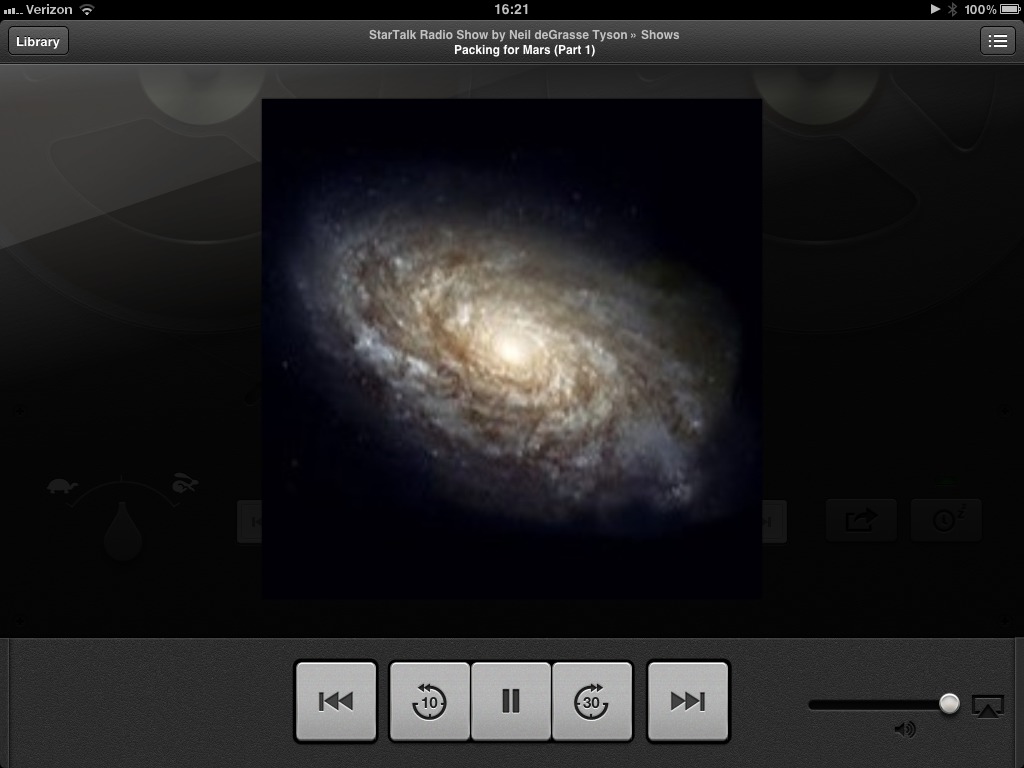 When you swipe up on the cover art, a simulated reel-to-reel tape deck is revealed, along with a few new controls: faster and slower options for playback speed; a sleep timer; and the capability to tweet, email, or text/message another person about the episode being heard. The simulated reel-to-reel tape deck provides good, subtle feedback as the tape moves from reel to reel, showing the progress through the episode. 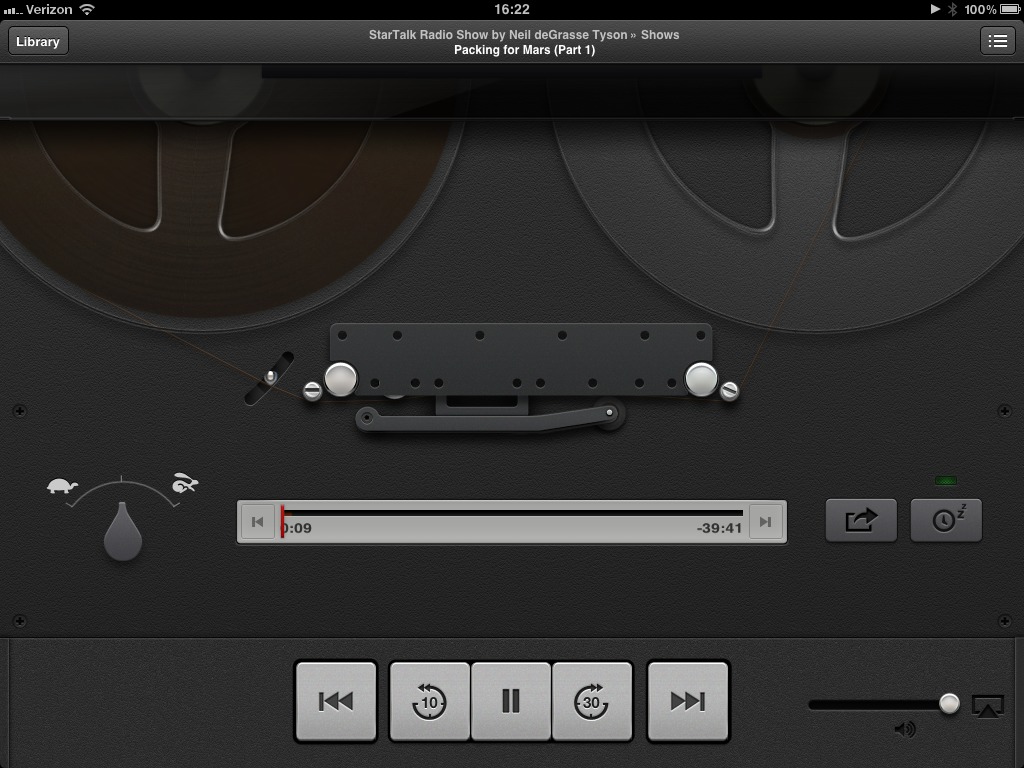 I’ve read a lot of mixed opinions on this bit of eye candy. I’m personally not all that bothered by skeuomorphic design (the practice of copying real world objects or behaviors) when it does not get in the way. Here the simulated tape deck works fine. It fills a space that would otherwise be empty (especially on the iPad in portrait mode) and it looks nice. I do think it exceedingly strange that Apple chose to evoke a technology that fell out of common use in the 1970s; the vast majority of users of the
Podcasts app have undoubtedly never seen a reel-to-reel tape deck.

More troubling is the player’s frequent sluggishness in responding to taps, particularly when you’re coming back into the app after using others such that it has to load from scratch again.

Toward the Breakout Box — Apple has been slowly moving toward a point where the Music app can focus purely on music. The Music app used to be the only way to watch certain videos and iTunes U content, but now the Videos app plays videos and the iTunes U app holds course content. With the Podcasts app, another type of data could be extracted from a future version of the Music app, something we might see in iOS 6 (perhaps along with either an Audiobooks app or a new version of iBooks that can handle audio books, the remaining type of non-music data in the Music app). This is a welcome change to Apple’s iOS apps ecosystem and will make for a better user experience
overall. That’s because, even though the types of data are generally similar, the activities surrounding them — listening to music, watching a video, following along with an iTunes U course, or tuning in on a favorite podcast — are quite different. What this trend leaves in question is Apple’s plans for the iTunes app as an integrated interface to the iTunes Store — the iTunes U and Podcasts apps eliminate the need to use the iTunes app for course content and podcasts, although the Videos app still switches you to iTunes instead of providing direct access.

Apart from a number of performance issues, my main complaint about the Podcasts app is with its redundant and confusing Top Stations section. It almost feels as though someone at Apple wrote it to propose an alternative to the Top Charts feature in the Catalog and both interfaces were left in by accident.

Those with advanced needs won’t find any significant features beyond what the Music app has provided all along, other than the app-level separation of podcasts from music, but that’s what independent podcatcher apps are for. For everyone else, the Podcasts app is a good start and once the 1.0 performance issues are ironed out, it will be a fine addition to Apple’s suite of basic iOS apps.

Comments About Podcasts App Breaks Podcasts out of Music App