Not long ago, I was invited to participate in a post-session Google Hangout On Air at the Le Web conference in London. When the organizer asked me to report on my bandwidth, though, there was much head-shaking as to whether my roughly 1 Mbps upstream bandwidth would be sufficient to provide high-quality video (my 15 to 20 Mbps downstream bandwidth wasn’t a problem). After a couple of brief Internet outages several weeks before this, Time Warner had replaced both my cable modem and the entire cable from the street, so I was pretty certain all the hardware was working within spec.

I hadn’t revisited Time Warner Cable’s service offerings in years, but some quick research online showed that I had the Turbo Internet plan, which promises up to 20 Mbps downstream and up to 2 Mbps upstream. Ignoring the fact that I wasn’t ever seeing the 2 Mbps upstream I should have been getting, I decided that an extra $20 per month to upgrade to the Extreme Internet plan (30/5 Mbps) was worthwhile, since we upload a fair amount of data and the 5 Mbps of upstream bandwidth would be welcome for video conferencing in particular. But since downstream bandwidth has never been our problem, the Ultimate Internet plan (50/5 Mbps) didn’t seem worth
the extra cost. Time Warner made it easy to click a link to chat with an online customer service rep, who was only too happy to help me upgrade. While we were chatting, I explicitly asked if my current cable modem — which had just been replaced, remember — would be sufficient for the Extreme Internet service level, and I was assured it would be. Some 20 minutes later, everything was done, and I was told that I’d start seeing improved performance either immediately, or within 2 to 4 hours.

(In fact, what happened was that 2 hours later, the entire connection went down, and I had to call support and get them to do something. It’s always a little unclear what they do, although I believe it involved properly linking my cable modem to the updated account. Luckily, they managed to fix it just as my iPhone dropped the call because I was in a low-reception part of the house.)

When I started testing the performance again, Speedtest.net reported consistently that I was getting between 20 and 30 Mbps downstream, and while my upstream performance wasn’t 5 Mbps, it was regularly between 1.5 and 2.5 Mbps. Bandwidth is very often shared, so it’s entirely common to get a bit less than your promised bandwidth, and while 2.5 Mbps was less than the 5 Mbps I’d been promised with the Extreme Internet plan, it was good enough for the Le Web conference hangout (with Kevin Rose of Google, if you want to watch). But as the days went by afterwards, that 2.5 Mbps upstream maximum nagged at me, and when some ebook uploads were
taking way too long, Speedtest.net reported I was seeing only about 800 Kbps upstream.

Frustrated, I called Time Warner once again, the support rep agreed that I should be seeing better performance, and he dispatched a tech to my house. As with the first tech who had replaced my cable, the second tech was extremely amiable and knowledgeable, but he had some choice words for the online customer service rep who had upgraded my account. Apparently — and this is so common that the techs have a word for it: “office-only’d” — the change had been made only in the office, and there was no way my cable modem could support 5 Mbps upstream bandwidth. Making this even more obvious was the fact that the Extreme Internet plan includes wireless clients — the cable modem also acts as a wireless gateway — and the cable modem
I had didn’t have any wireless capabilities at all (I didn’t notice this discrepancy when ordering, since I was focused on the bandwidth and had no desire to replace my AirPort Extreme).

After trying two cable modems that he’d been told were new (the first had a locked wireless network named “We no speak Americano” configured on it, and the second didn’t advertise any wireless network or allow wired connections), he grew irritated and gave me one straight from a shrink-wrapped box. It worked properly and provided the full 30 Mbps downstream and 5 Mbps upstream, as you can see in my graphs below, which also show the improvements over time. 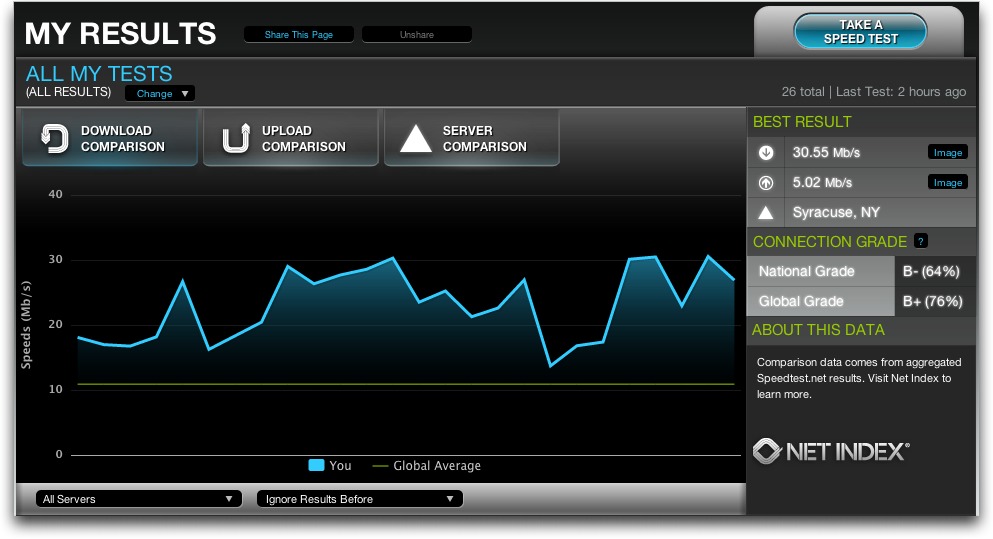 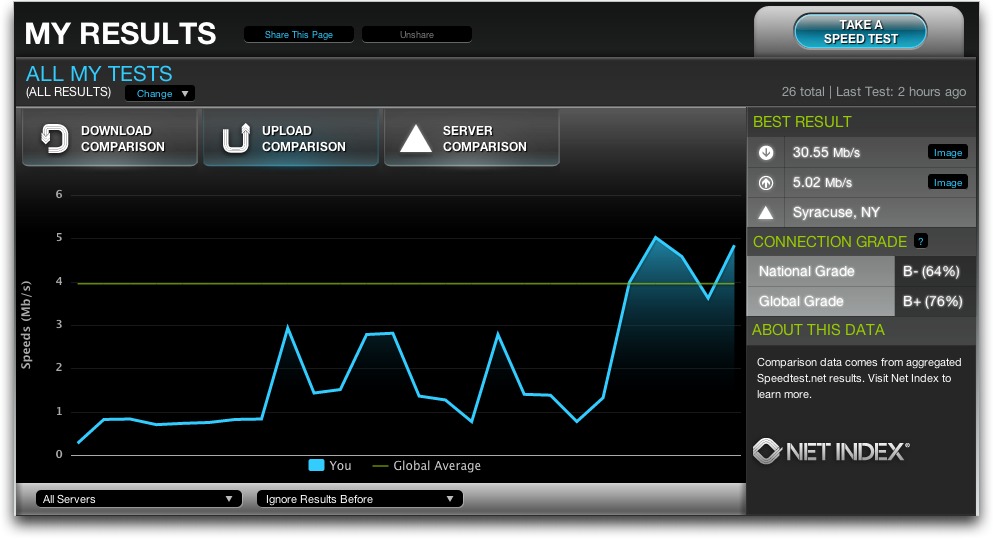 (Or, rather, it worked for about 2 hours, at which point the entire connection went down again, and I had to work my way through three levels of Time Warner phone support before I got to a guy who was able to link my fancy new cable modem to my account properly and get it all to work again. It seems clear that the Time
Warner system has some disconnects between what happens in the office and what happens in the field.)

So the moral of this story is that it’s absolutely worth using Speedtest.net (or a similar service) to check your downstream and upstream bandwidth. Performance does vary throughout the day, so be sure to run multiple tests in Speedtest.net over a number of days and at different times of day. Also be sure to test from a computer — although I like the Speedtest.net Mobile Speed Test app for testing general connectivity, its download numbers are often way too low and its upload numbers are often a bit high. Speedtest.net will keep track of your results (as you can see in the screenshots above), assuming you keep the same IP address, or you can set
up an account to ensure that your tests are collected regardless.

Once you have a pretty good sense of your average downstream and upstream bandwidth, compare that against what your Internet service provider promises you. Based on my experience, here’s what I’d advise:

I certainly wasn’t expecting my Internet connection — which is generally quite reliable — to require so many phone calls and truck rolls to my house, but I’m glad I stuck with it in the end, since I appreciate actually getting the full bandwidth that I’ve been promised. It’s easy to imagine someone who’s not particularly network-savvy suffering with a lousy Internet connection, just because they don’t realize what they should be getting.

Comments About Are You Getting the Bandwidth You’re Paying For?