I’m relatively new to everyday use of the second-generation Apple TV, since we just got one, along with a modern TV, for Christmas last year. Before that our video viewing was almost exclusively via Netflix, first on an elderly 15-inch MacBook Pro and then on an iPad when the MacBook Pro started freezing during video playback. The TV we settled on, a 50-inch Panasonic Viera ST30, has its own fully functional Netflix client built into its Viera Connect smart TV platform, and if it wasn’t in my interest to know what Apple is up to with the Apple TV, I would have no problem relying solely on the
Viera Connect Netflix client.

But the Apple TV’s Netflix implementation is prettier, and just a touch easier in everyday use; it was also easier to set up, but that’s a one-time task that wasn’t hard on either. We tend to work our way through TV shows (currently enjoying “Star Trek: Enterprise” with Tristan), so we use Netflix’s Recently Watched collection a lot. The Viera client requires seven button presses to get there, whereas the Apple TV requires only three; if you’re more of a movie fan, the Viera client requires only four button presses to get to your Instant Queue, whereas the Apple TV requires nine. Slightly annoyingly, those button presses with the Apple TV always require the Viera’s remote as well, since only it can turn the TV on.

That got me wondering if the Viera remote could be used to run the Apple TV. The Viera remote is a traditional black plastic bar with a ton of buttons, most of which I’ve never used or even figured out what they do. It’s not nearly as elegant as Apple’s sleek aluminum remote, but it has a very similar four-way controller with a central OK button and a separate Return button that does the same thing as Apple’s Menu button. 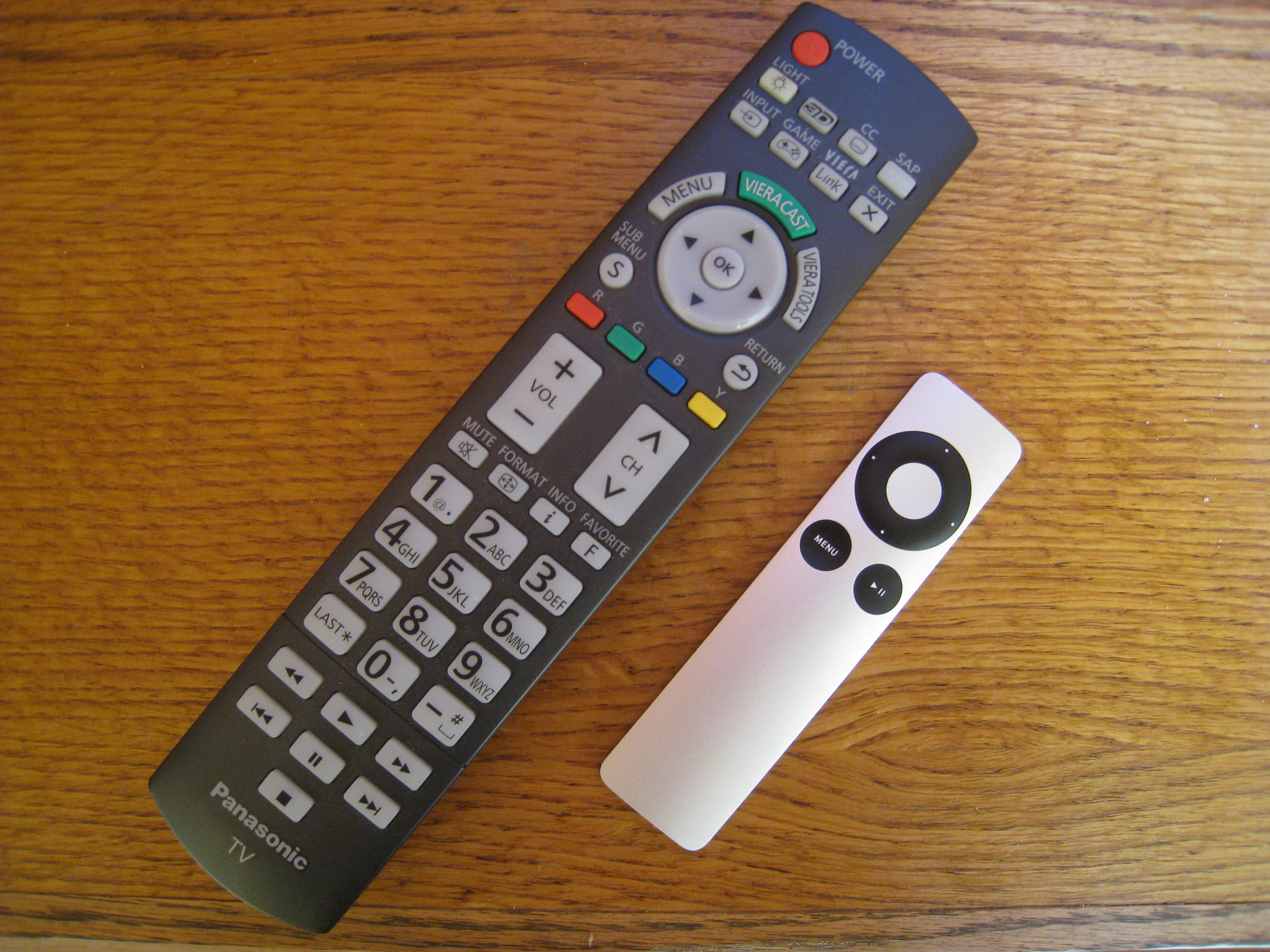 In fact, Apple did have the foresight to enable any remote to control the Apple TV, as documented in this support article. The process is the reverse of the way programmable remotes work, in that the Apple TV itself learns to associate buttons you press on the other remote with actions on the Apple TV. It’s a simple process, which you work through on the Apple TV in Settings > Remotes > Learn Remote. Basically, all you do is follow along as the Apple TV asks you to press a
button on your other remote that corresponds with the Up action on the Apple TV, followed by Down, Left, Right, and so on. It takes just a minute or two to complete, and worked nearly perfectly.

I say “nearly perfectly” because there’s one trick on the Apple TV that seems to work only with Apple’s aluminum remote. You can put your Apple TV to sleep by pressing and holding the center Select button for a few seconds; this saves a bit of power and cuts down on network usage if you have a photo screensaver bringing photos in from a linked computer. When I press and hold the equivalent OK button on the Viera remote, the Apple TV goes to sleep, but wakes up again nearly instantly. However, it’s easy to set Settings > General > Sleep After to 15 minutes in the Apple TV, which will eliminate most unnecessary power and bandwidth usage too.

What I don’t know, and can’t really advise on, is if other TV and universal remotes will work equally as well with the Apple TV. With the exception of the Skip Back and Skip Ahead actions in the Apple TV (which we’ve seldom used), the Viera remote has keys that match every Apple TV action, so it’s a particularly good fit. If your remote lacks a four-way controller, you could use the 2-4-6-8 keys on the numeric keypad to simulate it, for instance, with 7 mimicking the Menu button and 5 acting as the Select button.

(In case you’re wondering, both Apple and Panasonic have iOS apps. Apple’s Remote app runs the Apple TV, but I find it awkward to haul my iPhone out of my pocket, find the app, connect to the Apple TV, and use it. Except, that is, if I need to type any text on the Apple TV, where the Remote app’s virtual keyboard is far easier than the hunt-and-press approach necessary with any physical remote. Panasonic’s Wi-Fi-based Viera app can’t turn the TV on, not surprisingly, nor can it enter the Viera Connect interface, but once you’re in Viera Connect, the app does work and could be useful for entering text, which is again the only thing it does notably better than the dedicated remote.)

In the end, there’s nothing horribly wrong with using both remotes, or even supplementing them with the iOS apps — they all work well enough. But I’m enough of an interface connoisseur that I appreciate reducing the number of interface actions to the absolute minimum whether I’m using my Mac or my TV, and being able to use only a single remote scratches that itch. If you’re like me, it’s worth a few minutes to try; you can always delete the learned remote from the Apple TV’s list of remotes if you don’t like it.

Comments About Control Your Apple TV with Another Remote