You might look at the list of new features in OS X 10.8 Mountain Lion and think, “Ho hum, no big deal,” but a lot goes into a major update to an operating system. Rather than write yet another comprehensive review (see the work of our friends Jason Snell, John Siracusa, and Matthew Panzarino for that), we want to touch on features and shortcuts that you might not easily encounter on your own — or that we think are so cool
they deserve mention.

If you’re interested in Safari specifically, Sharon Zardetto has written up notable changes in her article, “What’s New in Mountain Lion’s Safari 6” (27 July 2012).

Save As Saved from the Dustbin — In 10.7 Lion, applications that used Auto Save lacked a Save As command. Although you could work around this disappearance, many experienced Mac users found it annoying (see “Subtle Irritations in Lion,” 17 August 2011, and “The Problem with Lion’s Duplicate Command,” 27 October 2011). Now in Mountain Lion, Save As is back! To access it, hold down the Option key while you open the File menu.

Auto Save Auto Locking — Under Lion, Auto Save included an auto lock capability — after a period of time, such as two weeks, a document would be locked automatically to prevent accidental editing should you open it later. (Strangely, the preference to control this behavior was in the Time Machine pane of System Preferences.) Apple must have gotten the message that the nanny-esque feature was more annoyance than improvement, so in Mountain Lion the automatic lock feature is gone. You can still lock a document manually: position the mouse pointer over a document’s title bar, click the little triangle that appears, and choose Lock from the menu. 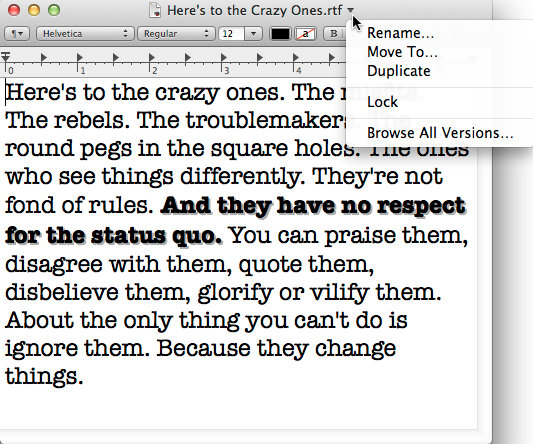 Turn Off All Notification Alerts and Banners at Once — Mountain Lion’s new Notifications feature pops up alerts and banners for a variety of actions, such as new messages in the Mail and Messages apps, Game Center alerts, and Twitter mentions and direct messages. If you’d prefer to hide them, you can do it in two ways:

Make Notification Center Appear Reliably with a Trackpad — Apple makes viewing Notification Center sound easy: “just swipe to the left from the right edge of the trackpad.” After scrolling the Safari window to the right repeatedly, we figured out that Apple really means from the edge. Position your fingers off the right side of a Magic Trackpad or a laptop’s built-in trackpad, and then swipe onto the pad’s surface.

Access Accessibility Options Quickly — Press Command-Option-F5 and you’ll immediately see a pop-up dialog where you can turn on and off core accessibility options, such as those for zooming and VoiceOver.

Incorporate Twitter Info into Your Contacts Database — With built-in support for Twitter, Mountain Lion enables you to compose and send tweets from the Share button in many applications, such as Safari, as well as from Notification Center. But you can also pull information from your Twitter account into the Contacts application (formerly known as Address Book). Twitter photos and other information available from the people you follow can be imported, although not using the Contacts app itself.

(Before you do this, we suggest you back up your Contacts data: Choose File > Export > Contacts Archive.)

Share System Audio to AirPlay Devices — In addition to the new AirPlay Video Mirroring feature in Mountain Lion, which uses AirPlay to stream your entire screen to a second- or third-generation Apple TV and thence to an HDTV, AirPlay adds new audio-only options as well. AirPlay has long enabled you to stream music from your Mac to a device such as a second- or third-generation Apple TV or AirPort Express, but before Mountain Lion you could stream only from an application that had a specific AirPlay output feature. Now, in Mountain Lion, you can also send your Mac’s system audio. Option-click the Sound control in the menu bar, where you’ll see a single (the first
alphabetical, or the last used) AirPlay device show up as an audio destination. You can find all available AirPlay devices and additional audio AirPlay options in the Sound preference pane under the Output tab. 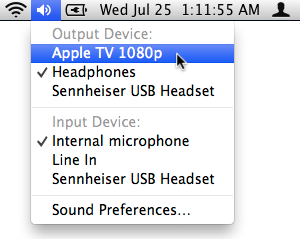 Speaking of AirPlay Video Mirroring, be aware that not all Mountain Lion-capable Macs can take advantage of it. Specifically, you need:

Share Items from Quick Look — When you select an item in the Finder and press the Space bar to open a Quick Look preview, you’ll find a handy Share button present, just like in Finder windows.

This option can be disabled by choosing Edit > Disable Shared Clipboard, but that applies only to the current session. To make the change permanent for future screen sharing sessions, choose Screen Sharing > Preferences and disable the Use Shared Clipboard option.

Also, you can now copy files from your computer to the other using drag-and-drop.

Semi-Smart Reminders — When you create an item in the Reminders application, it can pick up context from what you type. For example, typing “Pick up cake tomorrow at 4” creates a reminder of “Pick up cake” scheduled for the next day at 4:00 PM. However, the feature is still spotty — it doesn’t recognize geofencing, and sometimes it doesn’t properly recognize the time that was typed.

Change the Dictation Shortcut — The default keyboard shortcut for enabling the Dictation feature is to press the Fn (Function) key twice. If you don’t like that, or your keyboard lacks the Fn key, you can change it in the Dictation & Speech preference pane by choosing an alternative from the Shortcut pop-up menu, or specifying your own. 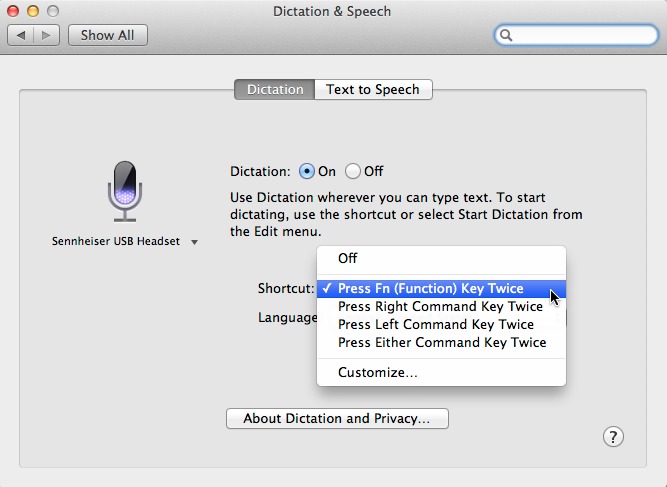 New Finder Progress Indicator — Is that large file copied yet? You can quickly see how much has completed by observing the new progress bar that appears on icons or next to file names during copy operations. It appears in all Finder views.

New Desktop Wallpapers — It wouldn’t be a proper Mac OS X update without a few new desktop wallpaper images added to the Desktop & Screen Saver preference pane. Some of the photos have their own interesting stories, too. The default desktop image, Galaxy, was enhanced by Apple from a NASA photo, and in the process a few galaxies disappeared. 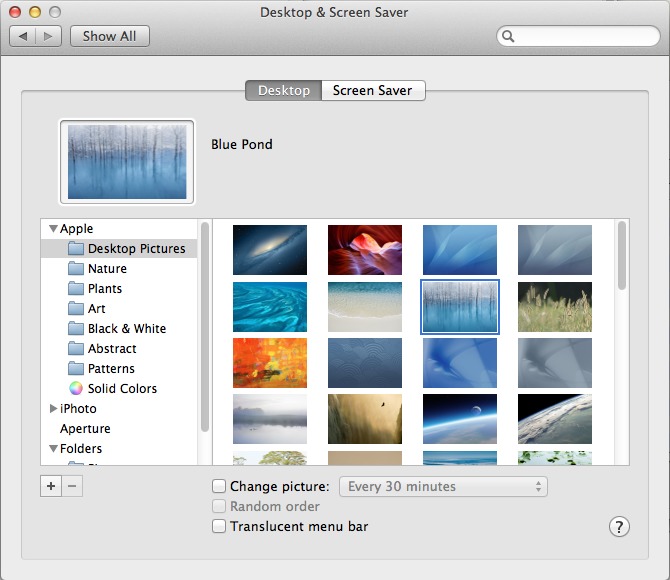 Apple doesn’t create all of the images in-house; read about how the Zebra image used in the Retina MacBook Pro ads was shot.

Create a Bootable Mountain Lion USB Drive — Having an external method of installing Mountain Lion is essential, in the event that your hard drive fails and you can’t access the Recovery HD partition to perform disk repairs or reinstall the operating system. If you ever created a bootable USB drive that contained the Lion installer, the steps are nearly the same, but with one key change: When you access the InstallESD.dmg disk image from the Mountain Lion installation package, you must first mount that image before restoring its data to the USB drive. Dan Frakes at Macworld has the full rundown of steps required to create the drive.

It’s possible to keep your security level as it is, but also open unsigned applications without going into the Security & Privacy preference pane to change the system-wide setting. Right-click or Control-click an application you’ve downloaded and choose Open from the contextual menu. Mountain Lion asks you to confirm that you want to open the file; click the Open button. This is necessary only the first time you open an application — after that it’s considered safe.

Multi-volume Time Machine — Michael Rose at TUAW pointed out via Twitter that one of his favorite features is Time Machine support for multiple volumes. Instead of relying on a single hard disk dedicated to Time Machine, you can rotate others into your backup system to ensure a level of redundancy (and keep a drive offsite for further safety).

More Tips — We’re sure that additional Mountain Lion tips and tricks will be discovered now that the teeming masses of Mac users can start poking and prodding at Apple’s latest big cat. If you discover any good ones, let us know in a comment and we’ll see about adding them to this article or a future one.