Safari has never been a revolutionary browser, even if, at its debut, it outclassed others in terms of look-and-feel. Safari 6 merely continues the app’s evolutionary development, introducing a few new traits, tweaking others, and totally dropping one that I depended on. In all, it feels much more like a 5.5 version than a leap to a new number.

The Address-Search Combo Field — Let’s start with the most obvious change, an overdue interface adjustment: there’s no separate search field. Its functionality has been rolled into the address field, which is now referred to with the catchy moniker “address and search field.” (While Firefox’s multi-function “Awesome Bar” grates on my nerves because it sounds like it was named by an unimaginative teenager, Safari’s is worse — apparently involving an unimaginative, overly pedantic adult.)

Type something into that field and Safari plucks a Top Hit suggestion from your history and bookmarks as well as providing a list of matches; now, it also starts a Google search. The drop-down menu lists its suggestions in categories, limiting the number in each to keep the menu to a reasonable size. You can search your history more thoroughly with a “Search for… in History” command at the bottom of the menu. A nice, subtle touch: the menu also includes a “Find… on this page” command that displays the number of matches on the page. (The standard Command-L and Command-Option-F shortcuts now both make the address field active; you can still search within the page using the search bar invoked with Command-F.) 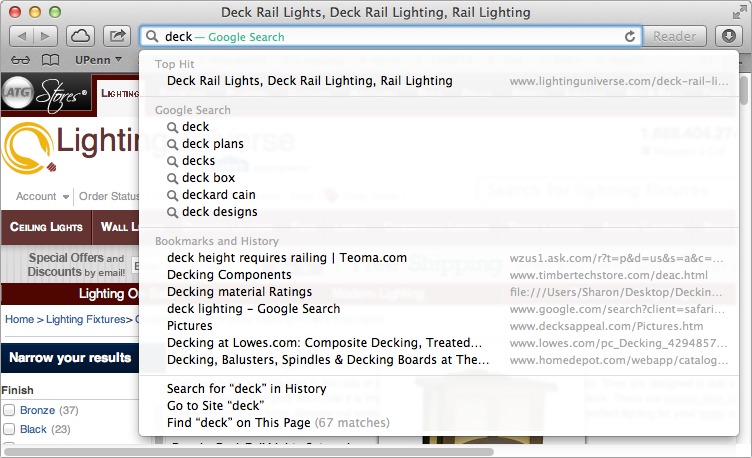 The combined address and search field means we’ve lost the previous search field’s special drop-down for changing your default search engine; that option now requires a trip to Safari’s General preference pane (where Google, Yahoo, and Bing remain the only choices; without an extension or other hack, you can’t add your own search engines, such as Google’s Browse By Name service; see “Surf Faster in Google Chrome and Safari 5 with Browse By Name,” 6 April 2011).

There are many cosmetic changes in the new address field, resulting in an overall much cleaner look. The http:// URL prefix doesn’t show, and everything after the domain name is in gray text. The Add Bookmark button has been detached from its left edge and promoted to toolbar-button status (although it is not part of the default set). The Reader button is integrated into the right edge of the field instead of floating there loose — it’s merely dimmed when the feature isn’t available for a Web page — and it no longer flips to an RSS button because… well, I’ll get to that in a bit. No progress gear spins while a page loads any more, and the blue background that fills the field as a
progress indicator takes a distinctly different visual approach. Along with the new Show iCloud Tabs and Share buttons, be sure to note the “Add…” notice in the status bar in this picture; for the screenshot, the Shift key was down, so a click on that link would add the page to the Reading List. 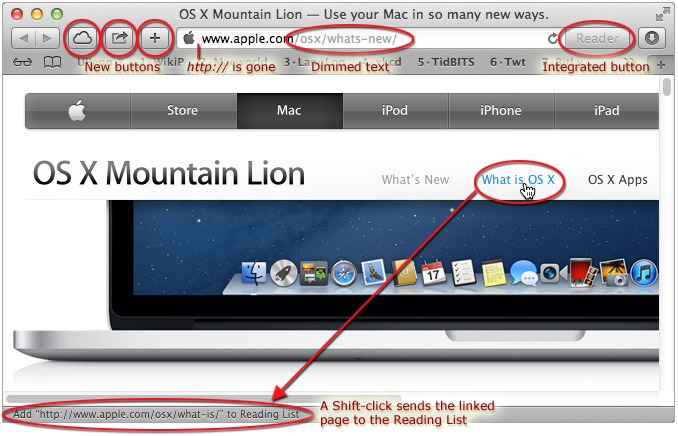 View Multiple Tabs. (Sort Of.) — There’s finally a way to view all the open tabs in a window: Tab View! That’s a sardonic exclamation point, because while there is a way to view them, it’s not a great way. It is, at least, slightly better than nothing. The View > Show All Tabs command or toolbar button, or a pinch gesture, puts all the tabbed pages into the body of the window, where you can scroll horizontally to view them by swiping or using the left and right arrow keys; the dots at the bottom of the window indicate how many tabs there are, and clicking a dot also scrolls you to the appropriate tab. 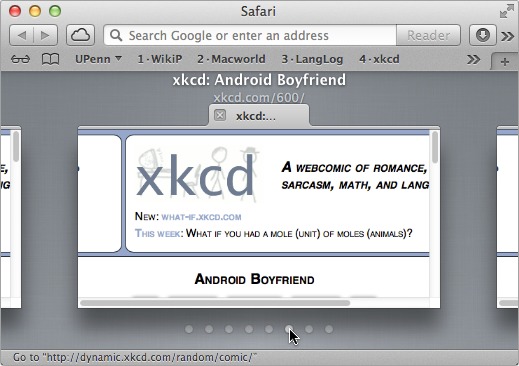 But you can see only one complete window at a time — the size of the tabbed page changes with the size of the window — limiting the usefulness of Tab View. It didn’t occur to anyone to use the Top Sites visual approach, with multiple thumbnails showing?

Another drawback of Tab View as implemented is the use of a pinch as a way to trigger it: it quickly becomes a natural-feeling gesture, but if you’ve pinched to zoom the text in the window and then zoom back a few levels with more pinching, it’s easy to slip into Tab View accidentally.

Read Your Reading List Offline — The Reading List was born as nothing more than a special kind of bookmark — you stored an informative link to a page so you could go back to it later when you had time. In Safari 6, it has matured into what it should have been all along: a way to store the page itself, so you can read it later when you’re offline. While Safari 6’s Reading List will sync with your iOS device, Safari there still treats it as a list of links at this point; it’s a good bet that offline reading will appear in the version of Safari in iOS 6.

Share and Share Alike — I hope you’re not tired of sharing stuff, or having stuff shared with you, because there’s no end in sight. The Share button — the arrow curving out of a box that’s all over iOS — has made its way into many places in Mountain Lion, including the Safari toolbar, where it provides a menu that’s echoed in the new File > Share submenu. Stretching the definition of “share,” the button’s menu starts with Add To Reading List and Add Bookmark. Both menus provide Email This Page, Message, and Twitter commands; a Facebook option is scheduled to be added in a couple of months.

RSS RIP — I’d like to rant about Apple’s having pulled RSS support from Safari, but “rant” implies something a little lengthier (along the lines of a Louis Black tirade on The Daily Show) than what I have to say, which is: What the heck were they thinking? RSS support has also been pulled from Apple Mail, meaning you must use a third-party app to handle RSS feeds on your Mac. I don’t use RSS for lots of sites, but for the sites I subscribe to, I use it a lot, so I’m quite… miffed at this downgrade. (Hmm… perhaps Apple was thinking that Notification Center could display RSS feeds?)

New Preference Panes — Web site sign-ins are the chief cause of password proliferation, and concomitant hair-pulling when you lose track of which one goes where. If you don’t use a third-party password manager like 1Password or LastPass (which work in multiple browsers, if you ever switch back and forth), the Mac’s Keychain Access utility has been the crutch to get you through. But now Safari provides a Passwords preference pane that gives you faster (it’s right there) and easier (it’s a straightforward list) access to your Web site usernames and passwords. There’s no password hint option as there is in Keychain Access, but entering your system password
temporarily displays all the passwords in the list, so I don’t miss the hints.

The Privacy preference pane lets you remove or block cookies, limit a site’s access to location services, and tell (or “ask”) sites not to track you.

The Appearance preference pane is gone — no more identifying your default monospaced and proportional fonts and their sizes; it is, after all, the twenty-first century. If you want to override a site’s font choices, you must create a CSS style sheet and specify it through the Advanced preference pane. The Default Encoding menu that used to live in Appearance has also moved to the Advanced pane.

Mac OS X Compatibility — While Safari 6 is installed along with OS X 10.8 Mountain Lion, it’s also compatible with 10.7 Lion. For the latter, use Software Update to download the latest version. Lion users won’t get Mountain Lion-level features such as sharing, notifications, and iCloud Tabs; they won’t get Tab View, either. 10.6 Snow Leopard and earlier are stuck with Safari 5.

Oh, and while we’re on the topic of operating system compatibility, Apple confirmed to Macworld that Safari 6 is not available for Windows, and it’s easy to assume that it never will be. Safari 5.1.7 remains available for Windows users who can find it on Apple’s Support site.

A Few More Things… — Some quick observations and tips, and if you’ve run across any other neat stuff in Safari 6, please leave a comment!

Version Envy or Pragmatism? — At this point, Web browsers are a mature class of software — note that none of the three major browsers has any notable feature that the others lack. Safari 6 seems to have earned its version number largely through its inclusion in Mountain Lion; from a feature standpoint, it rates no more than a 5.5, and that mainly because we get an offline Reading List.

But it’s also possible that Apple wanted to avoid falling too far behind Firefox, whose version number Mozilla has artificially jacked up to 13.0.1 (whoops, that’s now 14.0.1!) to compete with Microsoft’s Internet Explorer 10 and Google Chrome, which never advertises its version number (understandably, since it’s currently at 20.0.1132.57 on the Mac).

Or perhaps we assign too much importance to version numbers these days. They’ve historically been a signal of how significant an upgrade is deemed to be, but the truth is that without them, it’s difficult to be accurate when talking about changes or troubleshooting problems (“the new iPad,” anyone?).

[Sharon Zardetto wrote several dozen Mac books when they were still produced only on paper. She has since moved to ebooks, with her most recent titles being “Take Control of Safari 5” (which is in the process of being revised for Safari 6; everyone who purchases now will get a free upgrade) and “Take Control of Spotlight for Finding Anything on Your Mac.” Follow her on Twitter at @SharonZardetto.]