Apple does an excellent job of trumpeting new features in each release of Mac OS X, and OS X 10.8 Mountain Lion was no exception. But it’s important to distinguish the marketing discussion of new features from release notes about precisely what has changed, and one change might have escaped your notice: the elimination of the Web Sharing options in the Sharing pane of System Preferences. The open-source Apache Web server software is still present, but there’s no built-in way to turn it on and off without resorting to the command line.

Apple does acknowledge this move in a support article, essentially suggesting that if you want to run a Web site, you should get OS X Server, which costs an extra $19.99 in the Mac App Store. From a financial standpoint, OS X Server certainly isn’t a hardship, but that doesn’t mean that we should be happy about the removal of Web Sharing.

I won’t comment on whether OS X Server is appropriate for your Web serving needs at the high end, other than to note that we gave up on it several years ago for the TidBITS and Take Control Web sites. We needed more control over the configuration of Apache and other Web components than Apple provided, and flipping back and forth between Apple’s interface and the standard command line and configuration file methods of controlling things was troublesome.

Even for a small site, OS X Server isn’t necessarily appropriate, since it comes with a lot of baggage that’s overkill if all you want to do is start Web server software to test code that can’t be loaded from a static page (PHP, AJAX, Perl, etc.), to develop Web-based software for mobile devices, or even to use utilities that rely on Mac OS X’s built-in Web serving capabilities.

More bothersome is that by removing the Web Sharing options, Apple created an awkward situation for people who were running Web Sharing under 10.7 Lion. According to Chuck Shotton, who wrote the first Web server for the Mac — MacHTTP, which later became WebSTAR — Web Sharing settings under Lion are preserved when you upgrade to Mountain Lion, which means that you could end up with an active Web server that you cannot control in the same way you have under previous versions of Mac OS X. If you’re sufficiently technical, Brett Terpstra and Neil Gee have both posted instructions for addressing this and related Apache issues at the command line.

A simpler solution for anyone who wants to maintain access to the Apache Web server in Mountain Lion is Tyler Hall’s Web Sharing preference pane, which you double-click to install in System Preferences and then use to enable and disable Apache, just as you were accustomed to in pre-Mountain Lion versions of Mac OS X. Hall was able to create the simple Web Sharing preference pane due to his work on the $39.95 VirtualHostX, a utility that takes much of the complexity out of running multiple Web sites on a Mac; kudos to him for making it available for free. 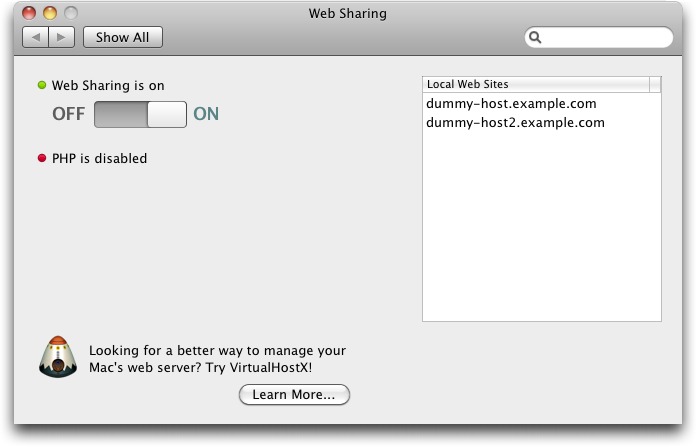 It’s distressing to see Apple simplifying Mac OS X in ways like this, not so much because it’s difficult to bring the functionality back, but because features like Web Sharing have been a mainstay of Mac OS X for so long. Having them deprecated in this fashion is more evidence of how Apple’s vision for the future of the platform is evolving away from where it has been for so long. We can only hope that — if we are indeed slowly being reverted back to the days before so many capabilities were built into
the operating system — Apple won’t prevent independent developers from stepping into the breach to maintain and extend such functionality.

Comments About How to Bring Web Sharing Back to Mountain Lion