Perfect speech recognition is one of the Holy Grails of computing — shouldn’t our computers be able to transcribe exactly what we say, complete with proper spelling and punctuation, as has been the case in science fiction for many years? In fact, speech recognition software is nothing new in computing. Windows users have long taken advantage of the excellent Dragon Naturally Speaking from Nuance. On the Mac, this software has gotten good enough only in the past couple of years, since MacSpeech licensed the Naturally Speaking engine and was subsequently acquired by Nuance, after which the MacSpeech app was renamed to Dragon Dictate.

But it’s important to understand what speech recognition software can and can’t do — we aren’t yet at the point where you can speak normally and have your words magically converted into text. I’ve been dictating into dictaphones and using speech recognition software for more than 15 years, and while dictating isn’t any faster than typing for me, I often find it more relaxing. For those who can’t type quickly, dictation might be faster, and it’s an essential technology for those with certain physical impairments or injuries.

The main thing to realize about speech recognition is that computers don’t understand what we say. They may be able to figure out what words leave our mouths, but they don’t understand any of the meaning or context. For this reason, dictation requires that you employ special techniques to convey what you mean.

Plus, speech recognition software works best in a quiet environment, since extraneous noise can render transcriptions that read like the work of Surrealistic poets. Luckily, technology, in the form of a noise-canceling microphone, can filter out background noise and provide a purer stream of audio to your Mac. This can enable you to dictate even in a lively office.

Starting to Speak — If you’ve never used dictation software before, you’ll find that the basics of how Apple has implemented it in iOS and Mountain Lion are extremely easy. 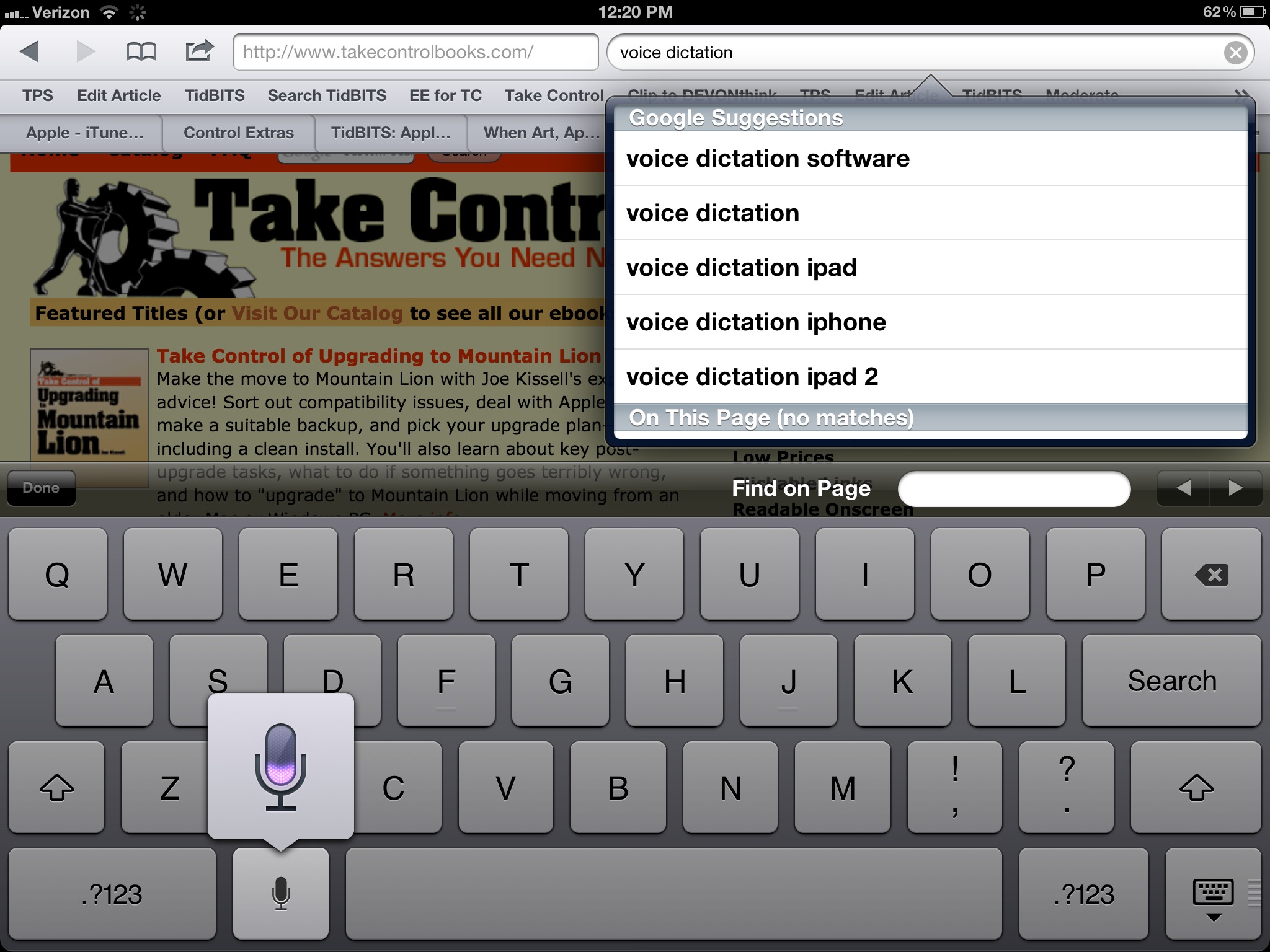 In Mountain Lion, position the insertion point where you want your transcribed text to appear, press the Fn (Function) key twice to start dictation, and then start speaking. (If you don’t have an insertion point, Mountain Lion just beeps at you when you press Fn twice.) As with iOS, press the Fn key again to alert Mountain Lion that you’re done speaking, or, if you keep the Fn key down on the second invocation press, you can just let up on it when you’re done. Or, you can click the Done button in the dictation balloon
that appears, but that seems like an awkward action if your hand was on the keyboard. Finally, you can just press Return to tell your Mac to process what you said. (You can change the key you press twice in the Dictation & Speech pane of System Preferences.)

Top Ten Techniques — A number of techniques can help you dictate more efficiently and more successfully. These are especially important with Apple’s dictation features in iOS and Mountain Lion, which don’t learn from what you dictate, unlike software like Dragon Dictate. For the best results, follow these rules:

Is Dictation for You? — Don’t expect miracles from Apple’s dictation features in iOS and Mountain Lion. With practice, you will find that they can be useful for short texts, such as instant messages, short email messages, tweets, and so on. But if you want to dictate longer texts, you need to use dedicated speech recognition software such as Dragon Dictate, which learns from your speech patterns and enables you to edit the mistakes it makes. Nuance also offers software with specialized vocabularies built in — MacSpeech Dictate Legal and MacSpeech Dictate Medical — that makes it much easier for lawyers and doctors to dictate.

Speech recognition can seem miraculous. When it works well, you can go from typing 40 or 50 words a minute to dictating twice that or more in the same time. This takes a fair amount of effort, both for you to learn optimal dictation techniques and — if you’re using Dragon Dictate — for you to train the software to recognize your unique way of speaking. But if you’re interested in making the leap to a world where you dictate most of your text, give Apple’s dictation features in iOS and Mountain Lion a try, and if you find them saving you time, check out Dragon Dictate.