Since its inception, I’ve used the multi-column Twitter client TweetDeck on my Mac. Single-column Twitter clients just don’t show enough information at once for the way I like to use Twitter, which is to glance at it every now and then to see if there’s anything interesting happening (after which I go back to ignoring it for long stretches because, hey, I have work to do!).

Before being purchased by Twitter in May 2011, TweetDeck was written in Adobe Air, which resulted in it being a pretty mediocre Mac app. Eventually, Twitter rewrote TweetDeck as a true Mac application, polishing the interface while retaining the multi-column approach that differentiated it from other popular Twitter clients. While calling out the native TweetDeck’s limitations, Mark Anbinder said generally positive things about the application in “New TweetDeck for Mac a Breath of Fresh Air” (12 December 2011).

But I have to admit, I could never come to terms with some of those limitations. In particular, the native TweetDeck’s columns were wider than I liked, forcing me to scroll right and left to see the seven columns I have defined. And worse, since I dip into Twitter relatively infrequently, there was no easy way to see an entire conversation, making it annoying to figure out what friends were talking about several tweets into a back-and-forth.

In the recently released TweetDeck 1.5.3, though, those two annoyances fall by the wayside. A new Use Narrow Columns setting in TweetDeck’s General settings fits more columns in the same space, cutting down on the horizontal scrolling that was necessary before. (A new Columns button/menu, with left and right arrows, makes it easier to scroll if necessary, as does support for swiping left and right.) And a small dialog balloon button displays tweets in a conversation, with the conversation replacing the contents of that column temporarily. 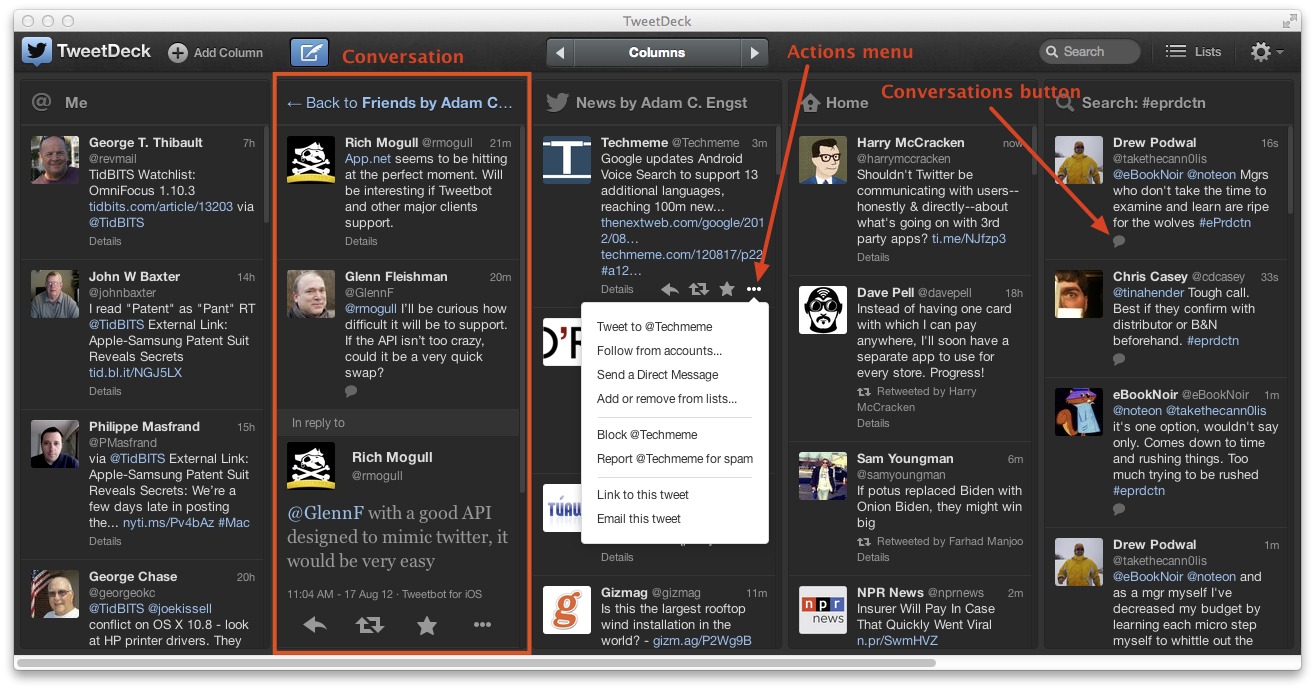 Another welcome change is the new actions menu (click the ellipsis button), which provides quick access to a number of useful commands, as you can see in the screenshot above. The one I use most is Report for Spam, since I’m constantly receiving URL-only tweets from spammers that advertise free iPads.

Other features that you might find useful (but which aren’t necessarily new) include filters that let you ignore matched tweets from loquacious friends, scheduling for businesses that want to queue up multiple tweets, and support for multiple Twitter and Facebook accounts. Columns are extremely flexible and can contain a timeline, interactions, mentions, searches, lists, direct messages, trending topics, favorites, and more.

TweetDeck still isn’t perfect, but this and previous updates have resolved most of my issues with the initial release, making it a more usable Twitter client than it was during its Adobe Air days. It’s free, and is available only from the Mac App Store.