While the iPhone has hogged the spotlight the last two years, Apple brought back a bit of the music theme of yesteryear to its September media event with the release of new iPod models, as well as a brief introduction to the newly redesigned iTunes desktop software. Interestingly, neither the new iPods nor the new version of iTunes will be available until October (though pre-orders for the iPods began on 14 September 2012), which led some to wonder if another iOS-based product (i.e., the rumored “iPad mini”) may be announced in the intervening weeks.

Although it doesn’t go all the way to the iPhone 5’s A6 chip, the iPod touch does get a processor bump to the older A5 chip — enabling it to run Siri — and upgrades its wireless capabilities to dual-band 802.11n Wi-Fi (2.4 GHz and 5 GHz bands) and Bluetooth 4.0. Both front and back cameras have been updated, with the rear iSight camera moving up to 5 megapixels and 1080p HD recording and the front FaceTime HD camera improving to 1.2 megapixels and 720p HD video resolution. Like the iPhone 5, the iPod touch includes the new Panorama feature that stitches images together into a panoramic photo.

In addition to the standard black and white case options, the iPod touch now comes in pink, yellow and blue, plus a red model that donates some of its profits to the Product (Red) anti-AIDS effort. The fifth-generation iPod touch is available for pre-order with pricing remaining the same as the previous model: $299 for 32 GB and $399 for 64 GB. The fourth-generation iPod touch remains a part of Apple’s product mix, with black and white models available at $199 for 16 GB and $249 for 32 GB (the 8 GB model has been discontinued). 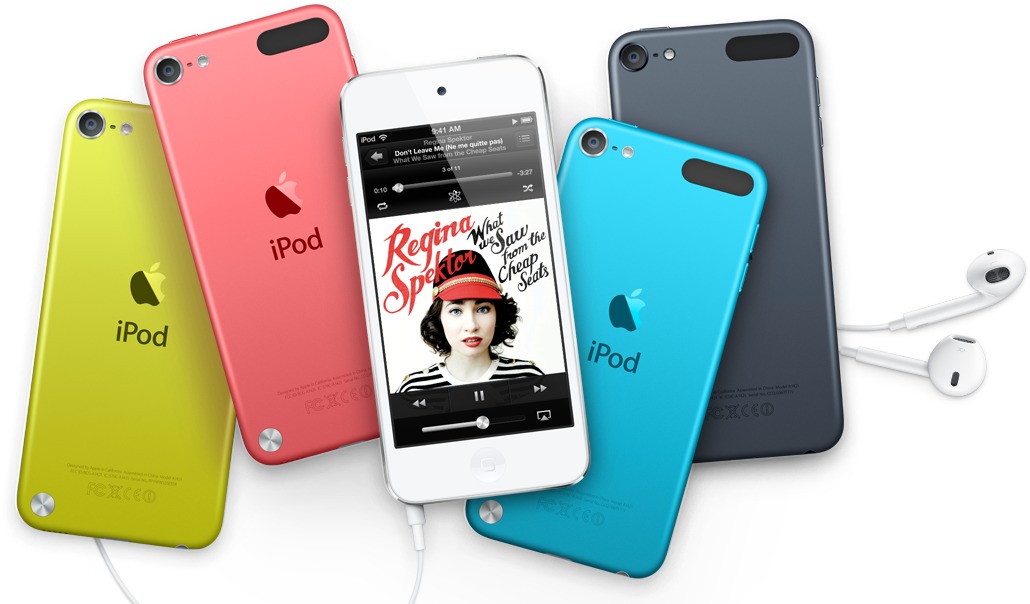 iPod nano — The seventh-generation iPod nano has once again been given a drastic redesign, returning to the slim, tall profile of the fifth-generation iPod nano after the sixth generation’s square shape (you won’t be wearing this one like a watch). This latest iteration measures 3.01 inches/76.5 mm tall, 1.56 inches/39.6 mm wide, and 0.21 inches/5.4 mm thin. With the larger body, it has also grown in weight to a “hefty” 1.1 ounces/31 grams (up from 0.74 ounces/21.1 grams).

The iPod nano sports a 2.5-inch Multi-Touch display (240 by 432 pixels), a home button on the front, and volume and play/pause buttons on the right side. Although it has a touch-sensitive display and a home screen with icons, its capabilities are still limited to audio, video, photos, and fitness tracking. It keeps the FM radio of its predecessor (though adding DVR-like pause and rewind capabilities) while also including Bluetooth 4.0 and improving its battery life to 30 hours. You have eight choices of colors — pink, yellow, blue, green, purple, silver, and slate, along with the Product (Red) model — but only a single choice of storage capacity (16 GB). Retailing for $149, the iPod nano will also be available in October (with
pre-orders having started 14 September 2012).

New Accessories — Like the iPhone 5, both the latest iPod touch and iPod nano adopt the new Lightning connector, which replaces the long-in-the-tooth 30-pin dock connector that we’ve used since 2003. Of course, a new adapter can play havoc with the iPod accessories you’ve become accustomed to, but Apple is offering two versions of a Lightning-to-30-pin adapter that’s available as a $29 single standalone piece or as a $39 0.2 m cable.

Both additions to the iPod family also include Apple’s EarPods, a replacement for the oft-maligned earbuds. The new EarPods have been designed to (thankfully) fit better in the ear and provide deeper bass — we’ll see how they work when they arrive.

The iPod Survivors — The iPod shuffle doesn’t receive any improvements, but it’s now available in colors that match the new iPod nano — pink, yellow, blue, green, purple, silver, and slate, plus Product (Red). It’s available immediately at $49 for 2 GB of storage. Additionally, the iPod classic survives another product cycle, with no changes to capacity (160 GB) or price ($249). 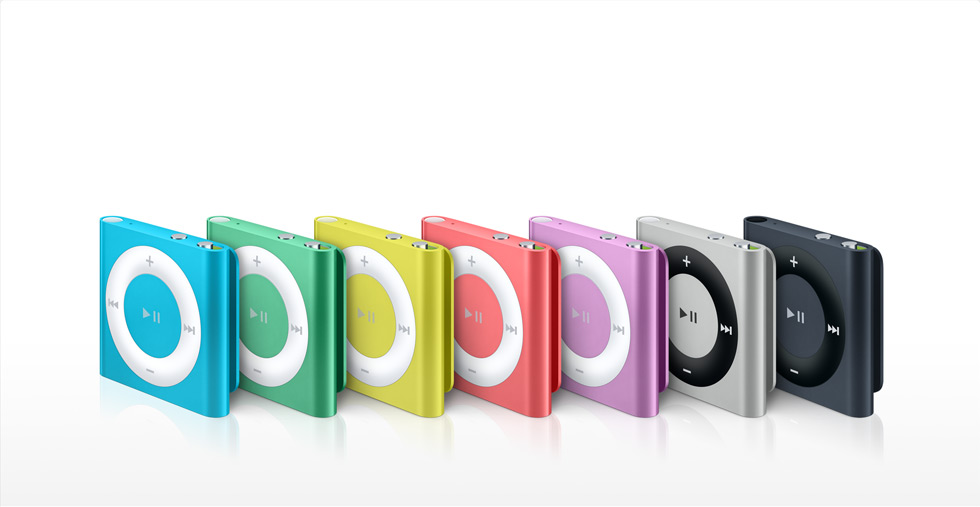 iTunes Goes to 11 (Or Does It?) — While Apple hasn’t officially assigned the version 11 number to the new iTunes (perhaps in order to avoid endless Spinal Tap references), the updated desktop software seems to be taking design cues from the redesigned iOS iTunes app. The new desktop iTunes has been given a cleaner edge-to-edge design that echoes its iOS compadre (which is where 60 percent of all downloads are made, according to Eddy Cue, Apple senior vice president of Internet software and services). It also adds a new Up Next feature that displays upcoming songs and enables you to add songs or albums to the
queue.

Other improvements include a redesigned MiniPlayer mode with built-in search and support for Up Next, and searches that span across your entire library (rather than having to choose a particular playlist or category to search within). iCloud is further integrated into iTunes, with all iTunes purchases now viewable in your library.