For about 30 hours starting on 11 September 2012, iCloud’s email service was spotty or unavailable for what Apple describes on its iCloud status page as 1.1 percent of its users. That may sound small, but in raw numbers, we’re talking about at least 1,650,000 people. The outage, unexplained so far, prevented access via email client software and the iCloud Web site.

Apple claims that service was “restored for all users” on 12 September 2012, but many people reported that incoming email was still unavailable. As of the morning of 13 September 2012, Apple says “Mail access has been restored for all users. Incoming messages sent during the service interruption may be delayed. Normal service will be restored ASAP.” 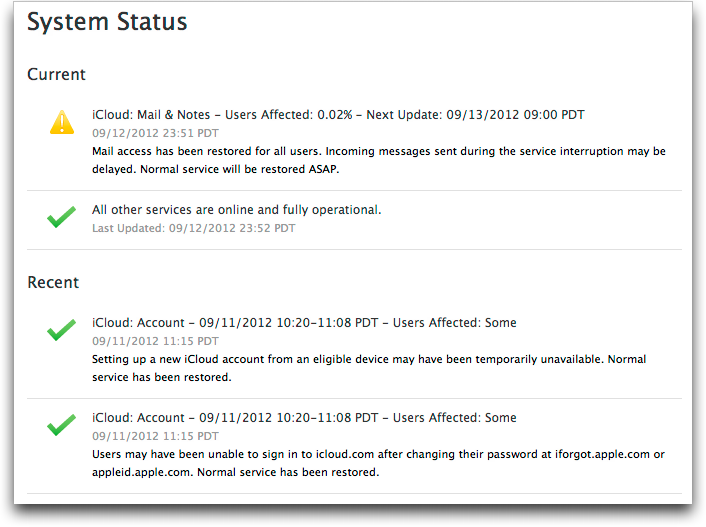 If iCloud queued but didn’t deliver incoming messages, Apple’s servers may simply be working through the backlog. If iCloud instead deferred incoming messages, the SMTP servers sending those messages might retry them for some period of time, but if messages are deferred for more than 24 hours, they may bounce back to their senders. In short, if you’re writing to or receiving mail from a me.com or mac.com account, it’s worth checking to make sure nothing has been lost.

During the worst of the MobileMe transition, Apple promised to communicate better and more fully about problems. Apparently, that was a short-lived situation. At least the status page provided some information, even if it was merely confirmation that the failures users were experiencing weren’t local.

The moral of the story is that it’s always good to have an alternate email address that you can fall back on should your main one become unavailable, regardless of where your mail account is hosted.

Comments About iCloud Email Outage Lasts Over a Day