On a trip from Seattle to Portland this weekend, I managed to consume about 150 MB of data from my AT&T cellular plan in the space of a couple of hours while driving. The only app that could possibly be consuming data was the Podcasts app, which was active and playing back podcasts that I thought were previously downloaded. 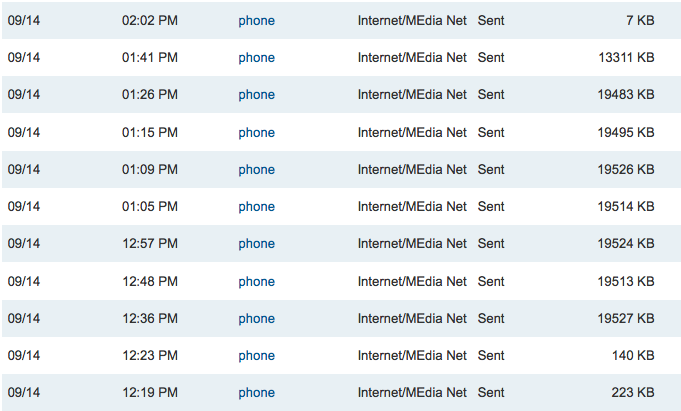 This is a maddening reminder of how hard it is to gauge the interaction of moving parts when you have third-party app providers (warned by Apple against excessive data consumption), Apple (which created the buggy and somewhat awful Podcasts app), and a cellular firm like AT&T. At least AT&T now offers a detailed accounting of data usage. (The ongoing report seems to automatically break into chunks of 20 MB or less, perhaps due to vagaries in an accounting system.)

There’s no way, of course, for me to figure out which app consumed the data, nor to be warned of excessive ongoing data consumption. Apple and carriers once set a limit of 20 MB for downloadable items like apps, music, movies, and podcasts over cellular networks. That was later raised to 50 MB per item. And Apple includes in iOS 5 switches to turn on and off certain activities over a mobile broadband network, like playing iCloud-hosted music. More such switches are coming in iOS 6.

Because the Podcasts app, unlike the Music app, doesn’t show a comprehensive list of what it’s downloading, I suspect it was polling and retrieving a number of podcasts that had been updated, even though I had launched and left the app running over Wi-Fi for a bit before I hit the road to make sure it didn’t carry out such tasks. There’s no switch to turn off cellular downloads for the Podcasts app, as it’s add-on software and not part of the basic iOS setup, like the Music app. The Podcasts app does include a switch to turn Auto-Download off or on for individual podcasts, but there’s no app-wide preference to disable this. 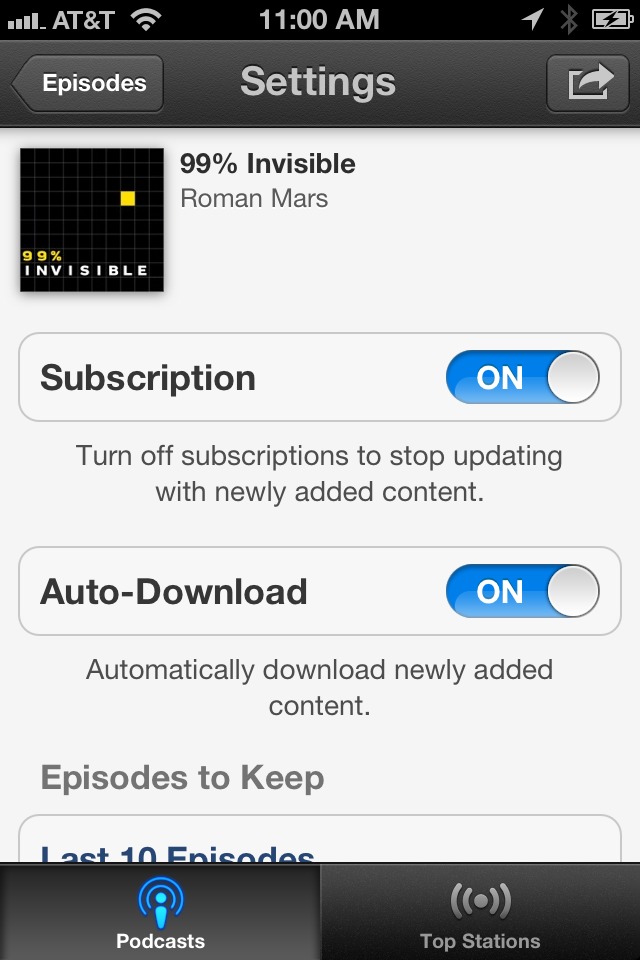 [Update: Hallelujah! The Podcasts 1.1 update that appeared 19 September 2012 alongside the release of iOS 6 includes a switch to limit downloads to Wi-Fi connections only. It also syncs subscriptions via iCloud, and offers pull-to-update. Too late for me. I’ve switched to another app, and will provide a review of it at a later date. —GF]

Have any of you seen the same mystery where you can pinpoint the time? AT&T used to dump its billing information nightly, leading some subscribers to wonder how they’d downloaded 100 MB at 11 p.m. With this hourly breakdown, we can refine our usage more closely, and possibly guess as to what app caused us heartbreak.

On my return trip, I killed the Podcasts app from the app tray, and used the Music app to handle listening to podcasts that were already downloaded. Data usage was minimal for that drive. The Music app no longer downloads podcasts, but you can use its interface to play them. You can also still use iTunes on the desktop to keep podcasts up to date and then use iTunes sync to copy those to iOS devices.

In iOS 6, the Music app removes podcasts altogether, which means that I have to find an alternative so that I can delete the Podcasts app permanently from my iPhone. At one point, Apple banned podcasting apps that downloaded (rather than streamed) audio recordings. That’s changed, and I haven’t surveyed the field. Which ones do you all like?