I have used a passel of audio editing programs over the decades, but the one I turn to most frequently these days is Fission from Rogue Amoeba. Why? Most notably, it can edit audio files in lossy formats and save changes without re-compressing the files, and it offers a simple interface for tasks that should be simple. Fission 2 significantly improves on the original without losing ease of use.

Fission 2 retains its basic approach in this update: open an audio file, which appears as a typical graphical representation of the audio information. You can play, scrub, rewind, and so forth. Click and drag to select a chunk of audio, and Fission will even optionally play the audio as you select. Press Delete, and the selection disappears, with the remainder of the sound snapping to the deletion point. Fission also lets you normalize (even out the sound level), divide a file into multiple pieces to save or copy separately, insert silence, and export in many formats. 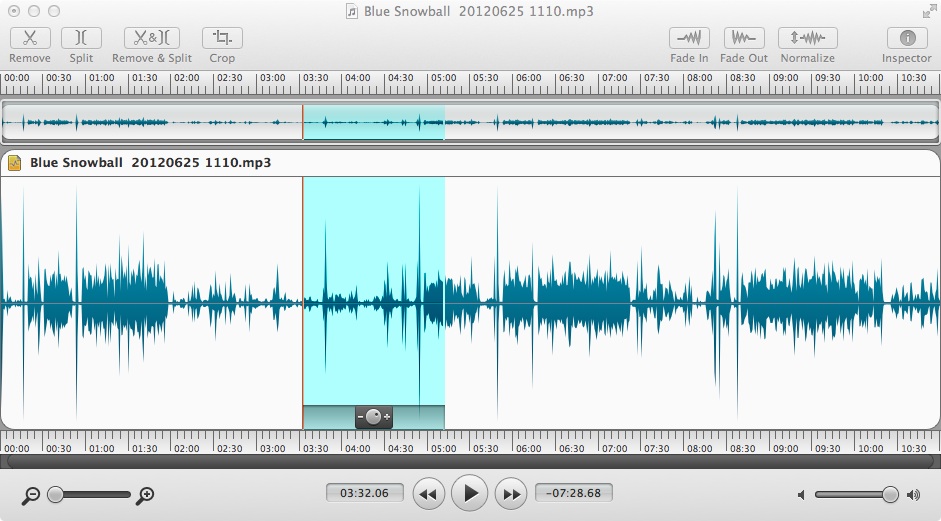 The update adds piles of new features, some of which I used immediately. The first release could handle just a single file at a time, possibly to keep it simple. Fission 2 lets you open multiple files. In my case, I needed to append one file to another. I opened both, copied the part to be appended from one, moved the playhead in the other to the end, and pasted.

While Fission always had broad support for different audio file formats — reading AAC, AIFF, Apple Lossless, and MP3, and allowing those to be saved without quality loss — Fission 2 also can directly edit the lossless FLAC format and WAV files, and export to any of these formats.

Fission 2’s new interface is crisper, making it easier to scan visually through audio sound waves; it offers two color schemes. It abounds with nice new touches. Select a range of audio and a volume knob appears at the bottom to adjust the volume of only that piece of sound. You can also drag selection markers without moving the corresponding audio to keep the length identical. Menu commands with keyboard shortcuts help you preview the beginning and end of recordings.

Also new in Fission 2 is batch processing to convert files from one format to another. This is particularly useful when you’ve used software that produces files in a given audio format; many programs omit AAC because they lack the necessary license. Plus, some programs require uncompressed AIFF or WAV files for input, and you can create those with Fission 2. Conversion can be either a drag-and-drop operation or invoked through an Open dialog.

For podcasters, Fission’s support for chapters in AAC eliminates the need for a separate piece of software to add images and markers that break up an audio file into discrete segments. This ties in neatly with Fission 2’s addition of direct export to SoundCloud, an audio-sharing site used by amateurs and professionals alike. (SoundCloud’s free version allows 120 minutes of uploads and 100 downloads of each uploaded track.)

Rogue Amoeba has a free trial version of Fission 2 that offers full functionality but inserts audio fades to prevent production use. Full copies cost $32 direct from Rogue Amoeba or through the Mac App Store. Owners of the previous version of Fission who purchased on 1 April 2012 or later are eligible for a free upgrade; for those who purchased earlier, upgrades run $15. Fission 2 requires Mac OS X 10.6 Snow Leopard or later, and is a 5.7 MB download.