With the combination of iOS 6 and the OS X 10.8.2 update, Mountain Lion’s Messages app can now send and receive iMessages using an iPhone’s number as the identifier. But I found it puzzling that when I went to my updated Mac’s Messages preferences, clicked Accounts, and selected iMessage, I didn’t see a phone number.

When your Mac starts up after upgrading to 10.8.2, you may receive a series of messages (as I did) alerting you to all the addresses associated with the Apple ID with which you use iMessage in the Messages program. That’s a nice change: the iMessage account now shows all associated email addresses, instead of requiring you to enter them. If you have iOS 6 installed on your iPhone, the phone number should appear as well; this doesn’t work in iOS 5, even with 10.8.2 installed. My iPhone’s number did not show up, however. 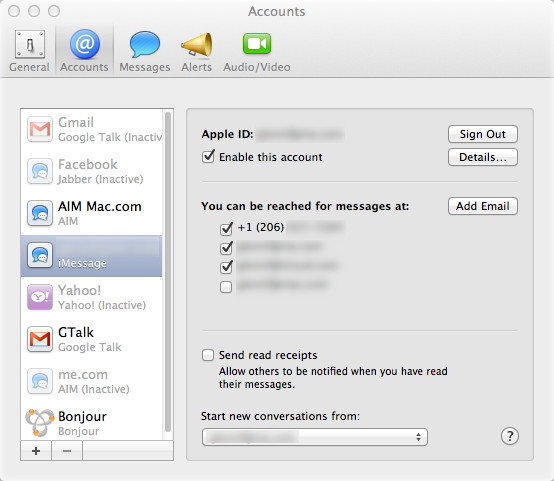 I logged out and back in using the same Apple ID on my Mac, and still no luck. The trick is to log out and back in on your iPhone instead. Some people have not had to do that, but based on Twitter commentary, others are in the same boat. Tap Settings > Messages > Send & Receive, and then tap Apple ID. Now tap Sign Out. Tap Use Your Apple ID for iMessage, and log back in, then tap Next. (The same procedure works for FaceTime.)

On my Mac, as soon as I did that, I received an alert that my phone number was available to use in Messages, and the iMessage account in Messages showed a checkbox next to my phone number. Click Yes on the alert to check that box, or you can later select the checkbox in Messages’ Accounts preference pane. I also received an alert from Messages containing the email addresses that were associated with my Apple ID on my iPhone.

The iMessage system is designed to let you receive messages at any Apple ID-associated email address and now also any iPhone phone number. You can pick an address or a phone number to use whenever you write a new message or reply. We explain that process in depth in “Caller ID in Messages Helps to Direct iMessages” (7 August 2012), although in iOS 6, Apple has deprecated the Caller ID term in favor of “Start new conversations from.”

So far, we and others have found iMessage’s behavior to be spotty. Perhaps these operating system updates will bring improvements in iMessage consistency? We’ll have to wait and see.

Comments About Use Your iPhone’s Number with Messages in OS X 10.8.2