“The new Passbook app in iOS 6 — what’s that for, anyway?” I hear you ask. Apple may have demoed the potential for Passbook to manage coupons, boarding passes, tickets, affinity cards, and the other identifying paraphernalia of daily life among road warriors, but it seems mysteriously empty right now.

Passbook is simultaneously looking to the future while remaining firmly fixed in the past. Many transactions in our digital life that require a real-world component involve printing a sheet of paper that contains a barcode or a 2D tag (those areas of squares and rectangles that you can see at the very bottom right of this page — see “Tag, You’re in 2D!,” 1 October 2009) that’s scanned by a clerk or gate agent.

You might choose to turn such a document into a PDF or open it as HTML email on your smartphone, but not all scanners (still!) read smartphone screens, or the display scale might not be the right match for what the equipment can resolve. I often have to resort to punching in a long sequence of digits. In February 2012, at Pennsylvania Station in New York, I had to wait in a 20-minute line because Amtrak’s “bar-code scanners” wouldn’t recognize my phone’s screen, the number I typed in from it, nor the credit card against which I’d charged the ticket. (Amtrak, whose budget woes are deserving of pity, has upgraded its systems since).

I have many times expressed my love for QR Codes, the most popular category of 2D tags, because they provide a sort of analog glue between two separate digital systems. With a QR Code, you snap a picture of an item in a newspaper, on a poster, in a train schedule, or even off a computer monitor, and your device turns it into text or a URL. In actual practice (outside Japan), this is a multi-step operation: launch a special app, wait for the camera sheet to appear, put the tag in its view, wait for it to resolve, and tap, then wait for Safari to launch. (If Apple built 2D scanning right into the Camera app, it would be a different matter. See “Apple Could Make QR Codes Work with a Simple
Tweak
,” 2 July 2012.)

But Passbook turns that process on its head. As a phone user, you don’t have to scan anything. In most cases, you will need an iOS app, like that of Fandango or United Airlines (already updated for Passbook), and the app will offer to add an entry to Passbook when you purchase a ticket or request a boarding pass. (The need for apps is why there’s an App Store button on the main screen of the Passbook app when it’s empty; tapping it displays Passbook-enabled apps in the App Store app.) This process will also work on Web sites, as the Passbook format is straightforward and a company has already started offering to produce them for businesses as a plug-in service. In theory, you can also receive a Passbook entry via email, though we
haven’t seen that in practice yet. 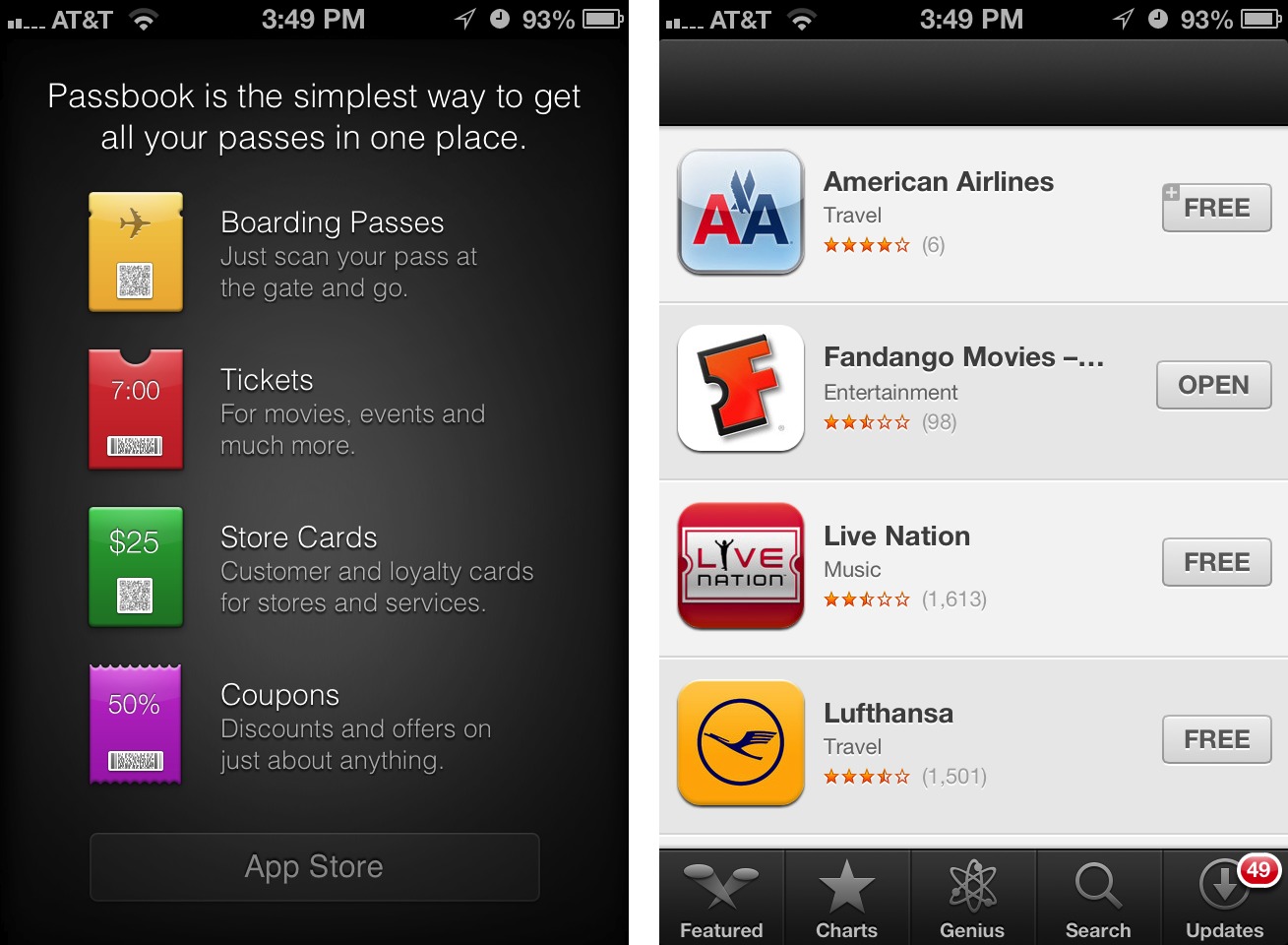 Many people were disappointed that the iPhone 5 didn’t support NFC (Near Field Communication), a set of standards that enable mobile devices to communicate with one another when in close proximity, and whose marquee use is contactless transactions. But NFC doesn’t have significant penetration in U.S. retail outlets yet, while barcode scanners that work with 2D codes on smartphones and, thus, Passbook are far more common. NFC may yet come to the
iPhone, and if it did, Passbook could evolve to transmitting the necessary data via NFC rather than relying on barcode scanning.

(NFC might be ready to make more inroads in the rest of the world where so-called chip-and-PIN credit cards are in use. With these cards, a merchant has to make an electrical contact to the card, and a customer types in a PIN. Only if the PIN matches does the card release its information for a charge. Customers and merchants are already used to portable charge terminals and entering a PIN. However, European colleagues tell me that the chip-and-PIN switchover was recent and costly enough that merchants might resist NFC, as it has no particular advantage in ease or cost savings.)

Over time, we’ll see Passbook entries for all sorts of things. Place an online order at a store with a brick-and-mortar retail shop, and the Passbook entry has the code to scan to pick it up. Or perhaps you’re browsing a Web site about coffee, and see a Starbucks ad offering a free latte; tap it, and the coupon is added to Passbook. Join an affinity program, such as a hotel’s loyalty program, and the card entry winds up in Passbook so you don’t have to carry an extra card in your wallet. I hope my local library, which has its own app that can show my barcode, adds my card’s info into Passbook as well.

The point of Passbook is to give you a single location to find all of these scannable documents, no matter where they’re generated. At some point in the future, there will be no more managing pieces of paper, PDFs, email messages, and separate apps for these bits of digitally displayed analog glue.

The other element of Passbook that we’ll be able to see only once it has really ramped up is location-based awareness. When you arrive at the airport for your United flight, Passbook will automatically bring up the boarding pass you need. Walk into a Starbucks store, and Passbook notifies you of a 20-percent-off coupon for the new triple caramel-encrusted macchiavelliano (if that’s not a Starbucks drink, it should be — the coffee whose ends justify the beans!). Digitally savvy muggers will be able to accost you in an alleyway, and Passbook will promptly give them a code to scan to empty your wallet. Perhaps that’s too speculative.

After a decade of mostly staying put in Seattle, I’ve started traveling again in the last year. I’ve been amazed at how the amount of user information I have to manage in some form has truly multiplied. On a single trip, I might need four boarding passes, a hotel affinity card, a car-rental affinity card, and a Starbucks card. Yes, yes, it’s a rough life, I know. But you may have seen the same clutter in your own life. Rather than stuff your wallet full of those cards and passes, why not have an app that does it for you?

At least, that’s Apple’s intention with Passbook. We’ll have to see how it plays out. Reports say Apple has major airlines, hotel chains, and retailers signed up. Any Web site or app maker should be able to play along easily as well, although it remains to be seen what sort of oversight Apple will apply and if Passbook will be truly open. The more the merrier — just as long as Passbook doesn’t become so crammed that I can’t sort through it, either.

One last note: If, like me, when you launch Passbook and tap the App Store link at the bottom of the main screen, an error appears that says “Cannot connect to iTunes Store,” there’s a trick to fix this bug. TUAW has the details, which involve setting your clock a year ahead and then back.

Comments About Passbook’s Best Is (Probably) Yet to Come