What makes any given technology cool? That was the question posed by astrophysicist and science communicator Neil deGrasse Tyson at the closing luncheon of the recent ASIS/ISC2 security conference in Philadelphia, and he came up with an interesting take on the issue.

For example, consider these two very fast airplanes. The SR-71 “Blackbird” is still the fastest airplane ever made, with a clocked top speed of Mach 3.5 (over 2,600 mph). But the only place you’ll see it flying these days is in X-Men comics, since it was retired from service in 1999. The other airplane is the Bell X-1, the first plane to exceed Mach 1, the speed of sound (and yes, the Bell X-1 was technically a rocket). Tyson thinks that the Blackbird is still very cool, while the Bell X-1 is dated and quaint. (Personally, I’d say the X-1 is still pretty cool, but partially because of its decidedly retro
flavor.)

On the other hand, compare both of these planes to the largest commercial aircraft you can currently board, the Airbus A380. Tyson quotes an industry observer as saying that this plane looks like “an anaconda swallowed a pig”, and says that flying in it is like checking into your hotel in Philadelphia and checking out in Europe. Which might be a plus, depending upon how often you’ve flown coach recently.
However, no matter how much you might enjoy the extra space, the only people who might call an A-380 “cool” are the conspiracy theorists who believe that all aircraft carry secret antigravity generators. The A-380 does not look streamlined, especially next to the faster Concorde — which both Tyson and I think is the most beautiful airplane ever made.

Finally, consider the Saturn V rocket, which Tyson cites as mega-cool to the space enthusiast, although it may have faded from the general perception of anyone born after the 1970s. The Saturn V remains the biggest cylinder that goes boom that humankind has ever made, holding records for tallest, heaviest, most powerful, and heaviest launch payload. A single rocket nozzle dwarfs a human standing next to it — Tyson says you can hold a tea party in one — and the Saturn has
five. If you want to compare this to the current American replacement model, you’re out of luck; the United States doesn’t currently have a launcher in this class, and will be renting space on Russian rockets until we develop a new one. 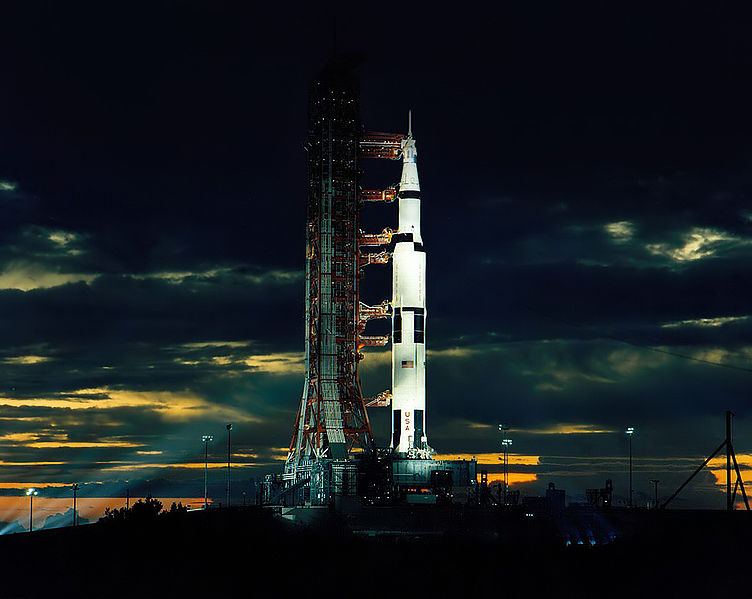 So what’s the point? Tyson noted something interesting about these still-cool designs. The SR-71, Concorde, and Saturn V — all designs that are still considered cutting-edge and cool to modern observers — are fifty years old. All three are retired from service. Most of our cutting-edge design happens in categories that didn’t exist fifty years ago, and objects over five years old can be hopelessly outmoded. If you’re under thirty and you’ve ever wondered why there was once a category called “carphones,” well, it was because
no one could come up with an elegant belt holster for one of these.

Tyson’s theory is that technology retains its coolness factor so long as it remains best-in-class. Therefore, whenever the coolest objects in a particular technology are decades old, that’s an immediate notice that we have essentially abandoned that technology. If we had ever invented bigger rockets or faster aircraft, then we’d consider the Saturn V and Blackbird to be historical artifacts, much like the Wright Flyer — which I think is visually interesting, but I
wouldn’t want to board. Extending Tyson’s idea, perhaps I still think the Bell X-1 is pretty cool because I’ve never flown on a commercial plane exceeding Mach 1, and I don’t ever expect to do so.

I find this insight fascinating because I’m a middle-aged tech enthusiast, and I think that many of my peers might not be picking up the difference between “is cool” and “was cool.” For example, my first computer was a Timex Sinclair 1000, and I will fearlessly defend its style against my mother’s contemporaneous workhorse, the TRS-80 Model II. However, that doesn’t mean I want my MacBook Air decked out in black plastic and sporting a flat keyboard. This isn’t something I’ve ever considered before, because it’s not something I’ve ever needed to consider. Design changes and technological style tend to
make certain things invisible and leave some questions unasked, even to those of us who use the technology every day.

You could extend Tyson’s insight to the computer keyboard, a century-old technology that we all use. At least here, it’s not for lack of trying that we haven’t replaced it, and I fully expect that within a decade or two, maybe sooner, anything with a keyboard will be considered hopelessly antique as nearly everyone switches to using excellent voice recognition instead. Sometime later, I wouldn’t be surprised if the same thing happens to voice recognition, if we ever come up with human-to-computer brain interfaces or even wearable virtual retinal displays.

(As an aside, I’ll be fascinated to see how any such changes affect online communication, and the writing skills of both the general public and people who write professionally. The advent of word processors led to a rapid increase in the length of books, and anecdotally, many of my colleagues have difficulty switching from keyboarding to dictation because writing and speaking engage different parts of our brains. I think it’s obvious that computers have raised the profile of the need for both writing and typing skills in the general public, although both of these were regularly and wrongly predicted to be obsolete educational needs in the 1980s and 1990s. It’s also obvious that, unlike predictions at the time, the general public
has never learned to write at a professional quality and the professional class of writers was never obsolesced. But I expect that excellent dictation systems in widespread use will certainly affect the content of future online and professional writing.)

This argument is especially of interest to users of Apple technologies, who might arguably appreciate aesthetics more than the general public. It’s easy to be distracted by the sleek MacBook Air and iPhone into thinking that our cutting edge is the best possible future at which we could have arrived. But the technology we enjoy is all dependent upon a series of discoveries and design decisions, and we don’t know what we’re missing out on because of technologies that were never discovered, beaten out by better options at the time, or simply abandoned. The ancient Greeks knew about the principles behind the steam engine, but never applied them to anything more than children’s toys; it’s interesting to consider where we might be
today if the Industrial Revolution had occurred two millennia ago.

Some technologies lend themselves to considering missed alternatives; anyone who has ever felt slowed down by their typing speed might wonder whether this elderly technology is the best we can do. Likewise, the example of other nations demonstrates (to me, anyway) that our free-market, Balkanized approach to cellular technology is part of what keeps us from having best-in-class wireless Internet speeds. Tyson’s heuristic provides one more tool for examining our technologies and noticing what they’re not. I’m very impressed by my MacBook Air, but its form is notably similar to the PowerBook Duo I bought in the 1990s. This fact probably means that the PowerBook’s design was strong enough to beat out competing designs
since, but it should also raise a red flag if we’re still using laptop clamshells for another decade or two. We might also question why, when presented with a new design paradigm like the iPad, our first impulse is to slap a keyboard onto it.

Speaking specifically of space exploration, Tyson called for recognition that deifying technology design of the 1960s is a serious problem. If the Saturn V looks cool to you, that means you’re trapped in the past, and should legitimately be asking government and private industry why we collectively haven’t done any better. Tyson added that he sees the short-term militarization of space to be inevitable — if we were able to work together for peaceful exploration, we’d be doing it on Earth first, so the same
military competitive factors that drove the space race in the 1960s are in place today. However, he’s more hopeful for the medium term: as new technologies make massive resources available to us, such as mineral wealth in asteroid-belt quantities, this may remove the scarcity that’s been an incentive to war throughout human history. Tyson wrapped up by saying that a nation’s vision for space exploration is an excellent statement of their vision for their society — which can be seen as optimistic or depressing depending upon your current assessment of our will to explore.

I’ll close with a recommendation: I’ve now seen Neil deGrasse Tyson speak both at conferences for enthusiasts and at what I assume was a speaker-fee appearance. His energy is noticeably higher when he’s actively preaching to the choir, but he is always among the most entertaining and educational speakers I’ve seen in person. I’ve covered maybe one-third of his one-hour speech here and had to cut the rest for length, which gives you an idea of his breadth and depth. If you get an opportunity to see him in person, go.

Comments About “What Makes a Technology Cool,” According to Neil deGrasse Tyson