TweetDeck 2.0 — Even though it will likely always play second fiddle to Twitter’s eponymous app, TweetDeck 2.0 offers some significant visual changes to the company’s column-based client. The new look comes thanks to a new light-colored theme, the capability to change font size (small, medium, and large only), and other design tweaks to improve legibility. Functional changes include removing tweets from people you unfollow or report as spammers, the capability to reposition pop-up windows, elimination of repeated retweets
in Timeline columns, quieter notification sounds, and resolved display issues with Growl notifications. (Free, 1.3 MB) 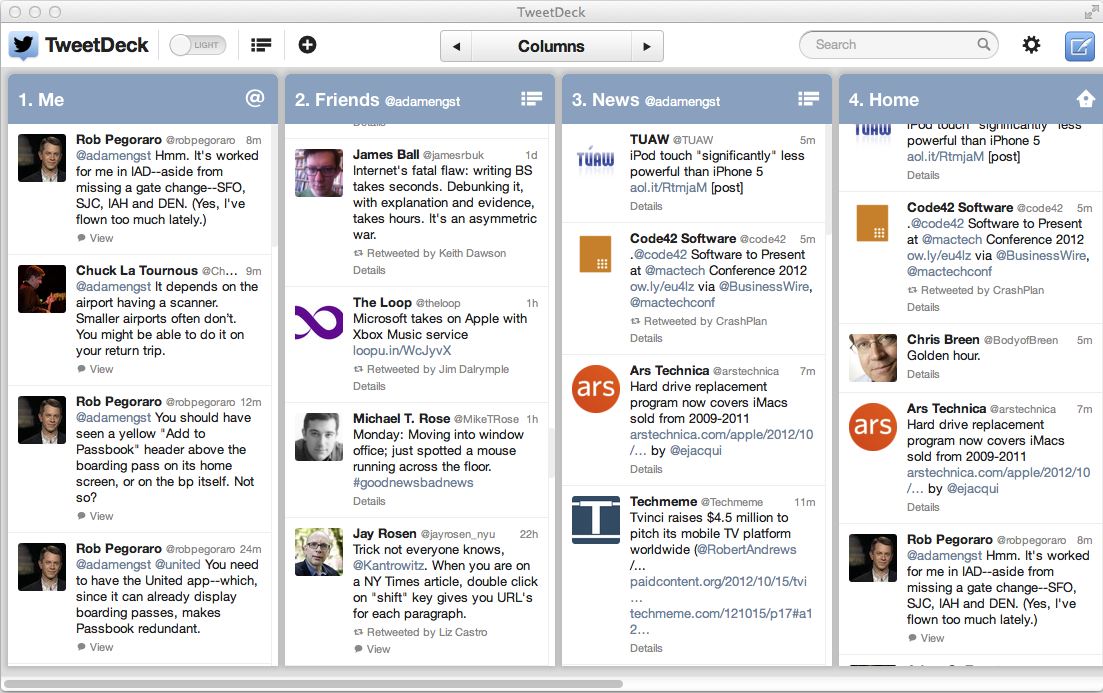 Firefox 16.0.1 — Shortly after releasing version 16.0 of the Firefox Web browser, Mozilla replaced it with Firefox 16.0.1, which addresses a security vulnerability that could allow a malicious site to determine which Web sites you had visited, and access their URLs or URL parameters. Regardless of the version number, Firefox 16 is a minor release. Most notably for Mac users, it now offers preliminary VoiceOver support, though Josh de Lioncourt of Mac-cessibility says that performance is poor. Mozilla also says that Firefox 16 offers initial support for Web apps, defined as apps built using standard Web technologies that are installed by a user, are self-contained, don’t always require the trimmings of a Web browser, and can be built to run offline. Mozilla is working on the Mozilla Marketplace to host these Web apps, much as the Chrome Web Store hosts Web apps built for Google Chrome. Other changes in Firefox 16 include a new developer toolbar, an error
count for the Web Console, and a new command line for quick keyboard access for developers, plus a few bug fixes. Still unresolved for some users is a bug that can cause slow scrolling in the main Gmail window. (Free, 33.3 MB, release notes)

Voila 3.3 — With a focus on improving compatibility with the MacBook Pro with Retina Display, Global Delight has released Voila 3.3, addressing a number of bugs specific to Retina display screenshots in the screen capture utility. Also fixed are crashes related to multiple monitor setups and a video corruption problem on the MacBook Air. For those with the MacBook Pro with Retina Display, note that you can set different export formats in Voila’s Export preferences; that way you can easily export more-compact formats when the
Retina display screenshots are too large for email or a blog post. ($29.99 new from Global Delight — with a 25% discount for TidBITS members — or the Mac App Store, free update, 13.8 MB, release notes)