When Apple added AirTunes to the Mac in 2004, the feature made it child’s play to send “tunes” from iTunes over the “air” to any AirTunes-savvy device on your local network, most notably an AirPort Express that you had connected to a stereo system with a cable. Times changed, as did the name of the feature, redubbed AirPlay in 2010. In its most feature-rich mode before the release of OS X 10.8 Mountain Lion, AirPlay could output not only audio but also the entire screen from newer iOS devices (the iPad 2 and later, and the iPhone 4S, and now the iPhone 5) through a second- or third-generation Apple TV, a capability called AirPlay Mirroring.

With the release of OS X 10.8 Mountain Lion, Apple has brought AirPlay Mirroring to the Mac, enabling you to output audio or video via AirPlay from sources other than iTunes. Specifically, you can now make AirPlay your default sound output destination for system audio and send your entire screen to an Apple TV. Audio output can be directed to any appropriate AirPlay-savvy device, with third-party speaker systems joining Apple’s own AirPort Express and Apple TV. For details, read on, and also be sure to check Apple’s support article on using AirPlay.

Stream Audio — To stream audio from your Mountain Lion Mac, simply select your desired AirPlay device in the Sound pane of System Preferences, in the Output view. To test your settings, select a sound file in the Finder and press the Spacebar to start playing it via Quick Look. 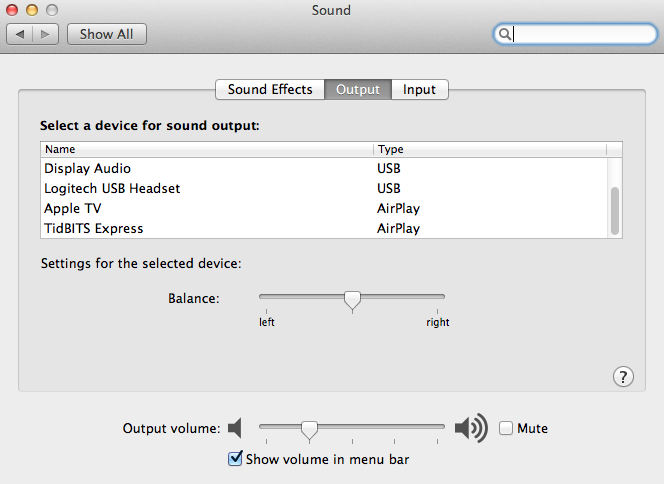 While you’re in the Sound preference pane, you may wish to select the “Show volume in menu bar” checkbox, if it’s not already enabled. That’s because — once the Sound icon appears — you can Option-click it in the menu bar to choose an output device (whether an AirPlay device or not). If you have more than one AirPlay device, however, note that your Sound menu currently shows only the most recently selected AirPlay device. 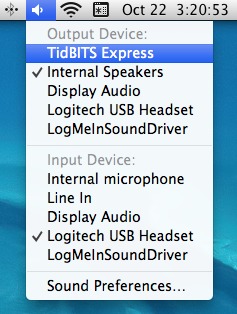 Mirror Your Mac’s Screen — This feature has added fun and function in my home with our Apple TV/TV combo. We’ve used it for group HTML-editing sessions, following along with online videos of stretching routines, and sharing photos straight from iPhoto with visiting family.

Missing the Old Display Menu Bar Menu? — The AirPlay menu bar menu in Mountain Lion has displaced the Displays menu bar menu found in older versions of Mac OS X. Some people are understandably unhappy about this, because they liked being able to quickly switch certain display characteristics, such as resolution, from this convenient menu instead of working from the Displays preference pane. Fortunately, help is at hand in the form of Display Menu, a free utility by Thorsten Karrer. I haven’t used it in any real way, but it does basically work with my two-monitor Mac setup. 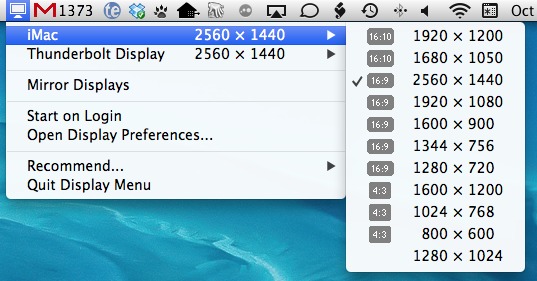 AirPlay into the Future — Keep an eye on AirPlay — I believe it’s a more important technology than might be evident at first glance. In essence, AirPlay lets us redirect audio and video from one device to another, which could enable some interesting possibilities, particularly if input methods were added. Perhaps a future version of AirPlay could enable you to move fluidly between using an iPhone’s screen and other interactive displays, much as is imagined in this example in Corning’s “A Day Made of Glass” concept video (the link takes you 1:45 in).

Comments About Playing with AirPlay in Mountain Lion