With over 100 million iPads sold since inception, Apple was sitting pretty when Senior Vice President of Worldwide Marketing Phil Schiller revealed the long-rumored iPad mini (without making a single “Honey, I shrunk the iPad” joke, thankfully). More surprising was what led up to the iPad mini — the unexpected announcement of a fourth-generation iPad to replace the third-generation iPad.

iPad mini — As you would expect from its name, the iPad mini is somewhat smaller than the other iPads, with dimensions of 7.9 by 5.3 inches (200 by 135 mm). In comparison, the iPad 2 is 9.5 by 7.3 inches (241 by 186 mm). The iPad mini is also slightly thinner (0.28 inch, 7.2 mm) and about half as heavy (0.68 pound, 308 g). Inside its black/slate or white/silver case, the iPad mini features an A5 processor, the same as in the iPad 2, but it boasts several hardware upgrades over that older model, including improved cameras (a front-facing 720p-capable FaceTime camera for video
chat, and a rear-facing 5-megapixel iSight camera for photos), a better 4G/LTE cellular radio (and corresponding nano-SIM slot), Bluetooth 4.0, and a Wi-Fi radio that Apple claims can achieve “twice as fast” Wi-Fi speeds (in the real world, assume it could be up to 50-percent faster; also see “How Apple “Doubled” iPad Wi-Fi Throughput,” 24 October 2012). 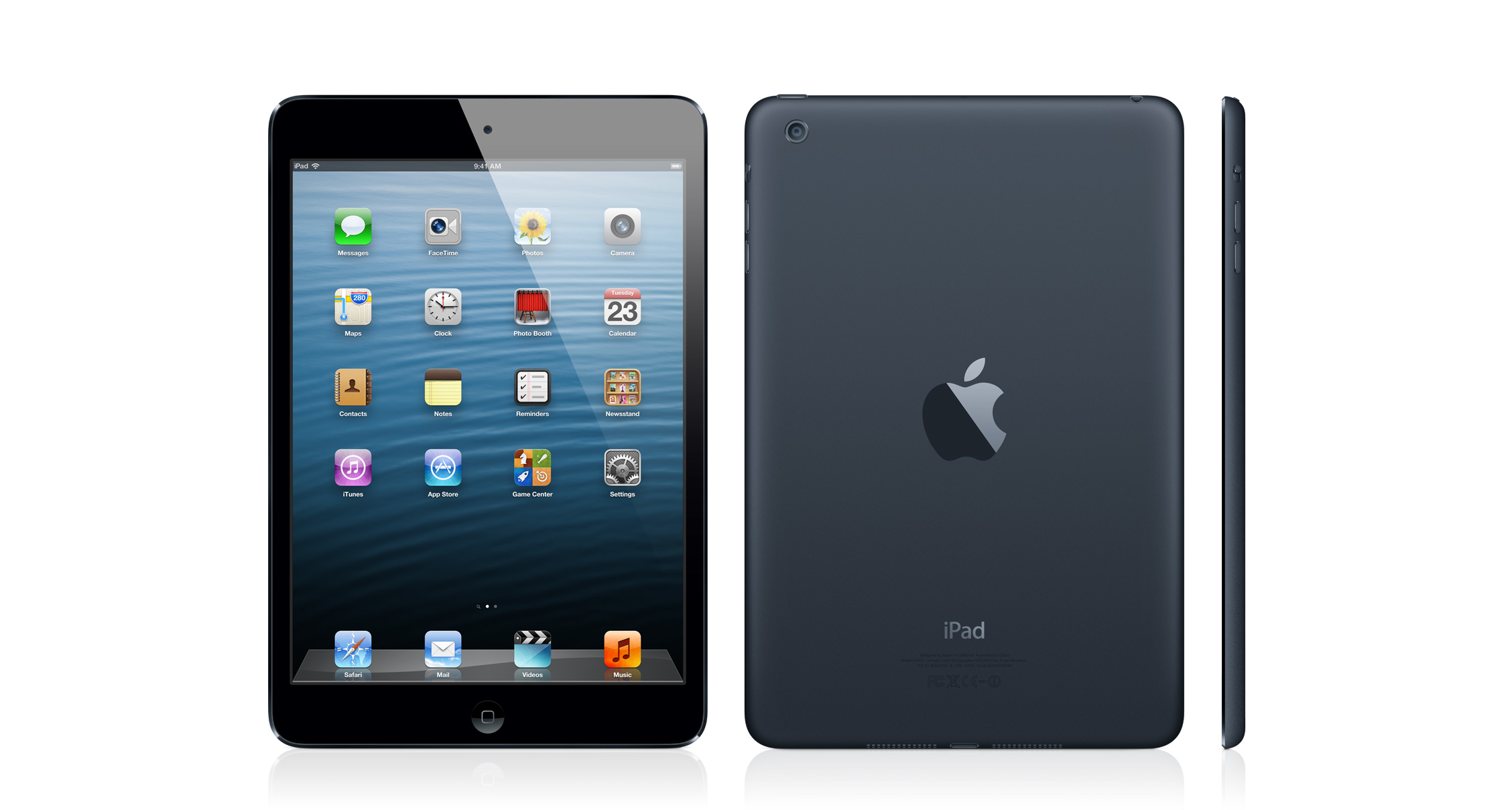 Perhaps most important, the iPad mini’s 7.9-inch screen has exactly the same number of pixels (1024 by 768) as the iPad 2. That means apps designed for the iPad’s 9.7-inch screen will look exactly the same on the iPad mini, with no need for developers to create special versions, as they have had to do for the iPhone 5’s taller screen. Notably, the iPad mini’s screen is not a Retina display — it has 163 pixels per inch (ppi) compared to the iPad 2’s 132 ppi and the third-generation iPad’s 264 ppi.

Replacing the third-generation iPad is the fourth-generation iPad, which looks just like its predecessor, but boasts a new A6X chip that Apple claims will double the performance for CPU and graphics processing, as well as an improved front-facing camera that offers 720p HD video for a clearer video-chat experience. As with the iPad mini, Apple claims that the fourth-generation iPad has “twice as fast” Wi-Fi. Apple’s marketing name for this new iPad is “iPad with Retina display” which will be nearly as confusing as “new iPad” in another generation or two.

Lightning Continues to Strike — The Lightning cable, which Apple introduced last month for the iPhone 5, fifth-generation iPod touch, and seventh-generation iPod nano, makes its debut in the iPad world with these new models. In case there was any confusion, Schiller mentioned that all Lightning cables work identically among all these new Apple devices. He also noted that several adapters are now available, so you can connect from Lightning to USB, VGA, and HDMI, and he showed a Lightning-compatible SD card reader.

Making the Decision — Anyone shopping for a new iPad will now have to choose between the smaller iPad mini and the more-substantial fourth-generation iPad with its Retina display. The first- and third-generation iPads are no longer available from Apple, though the 16 GB model of the iPad 2 continues to hang on at the reduced $399/$529 price point.

The smaller size and lower price tag of the iPad mini will help it compete against the many models of Kindle, Nook, and various Android tablets that are smaller and cheaper than the larger iPad. Apple is certainly aware of this, and they spent a surprising amount of time during the announcement dissecting differences between the iPad mini and the Google Nexus 7 tablet, which is still a good bit cheaper at $199 for 8 GB and $249 for 16 GB.

Only time will tell if the form factor of the iPad mini will prove significantly popular. Its size does make it more portable, certainly, but that small size will also make the device harder to type on for those who haven’t mastered thumb typing. (In Apple’s elegant iPad mini ad, the camera shows someone playing piano in the GarageBand app on a fourth-generation iPad with multiple fingers, then pans to show a single finger playing the same app on an iPad mini.) Also, I wonder if the iPad mini’s smaller pixels will prove difficult to read, though our own Jeff Carlson had some hands-on time with the iPad mini in the press room after Apple’s announcement, and he said that the screen looked “nice” and “not squished at all.”
(He wrote up his impressions for the Seattle Times in “iPad mini looks like a good fit.”) Still, if you have trouble reading type in small sizes, I suggest that you examine the iPad mini in person before buying one.

If size is your key feature, it’s also worth considering if the fifth-generation iPod touch might be a better option, since it isn’t a whole lot different from the iPad mini in terms of specs (apart from the smaller physical screen and lack of cellular data support) and costs $299 for 32 GB and $399 for 64 GB.

I don’t expect that many people who own the iPad 2 or third-generation iPad to buy an iPad mini right away, since it doesn’t offer that much extra. (Given our collection of previous iPads, my family is certainly not getting one; nor do we see any reason to get a fourth-generation iPad.) Owners of the original iPad might be more interested, thanks to the faster performance and cameras, as well as the smaller size. Given its pricing, I believe the iPad mini will attract mostly people who really want the smaller form factor, rather than just those who are price-conscious and can get either the even smaller 32 GB fifth-generation iPod touch for $30 less than the 16 GB iPad mini, or the larger 16 GB iPad 2 for only $70 more than an iPad
mini. As with the three 13-inch MacBooks, Apple is making consumers think harder than ever before about features versus price.

Apple said the W-Fi-only models of both the iPad mini and the fourth-generation iPad would ship on 2 November 2012 in numerous countries. The cellular models should begin to become available in mid-November, beginning just in the United States and rolling out more slowly to other countries.

Comments About Apple Introduces the iPad mini and Fourth-Generation iPad