At its special media event last week, Apple led up to the introduction of the iPad mini and the fourth-generation iPad with not one, not two, but three new Mac models. The iMac received a new industrial design, a new 13-inch MacBook Pro with Retina Display entered the product line, and the Mac mini received a CPU upgrade.

Interestingly, Apple Senior Vice President of Worldwide Marketing Phil Schiller claimed that the iMac is the best-selling desktop computer in the United States. Even more impressive, he said that the 13-inch MacBook Pro was both the best-selling notebook in the country and the top-selling Mac overall. That fascinates me, since although I’ve always liked the 13-inch form factor (and the 12-inch PowerBook before that), Apple has always seemed to put more emphasis on the 15-inch models.

New iMac Gets Thinner — With the iMac, Schiller made a big fuss about how amazingly thin it is, tapering to only 5 mm at the edges and dropping in weight as well. Not surprisingly, that thin edge leaves no room for an optical drive (a USB-based SuperDrive is available separately), and although there is an SD card slot, it is now located on the back of the iMac, next to the other ports, where it will be rather difficult to access. 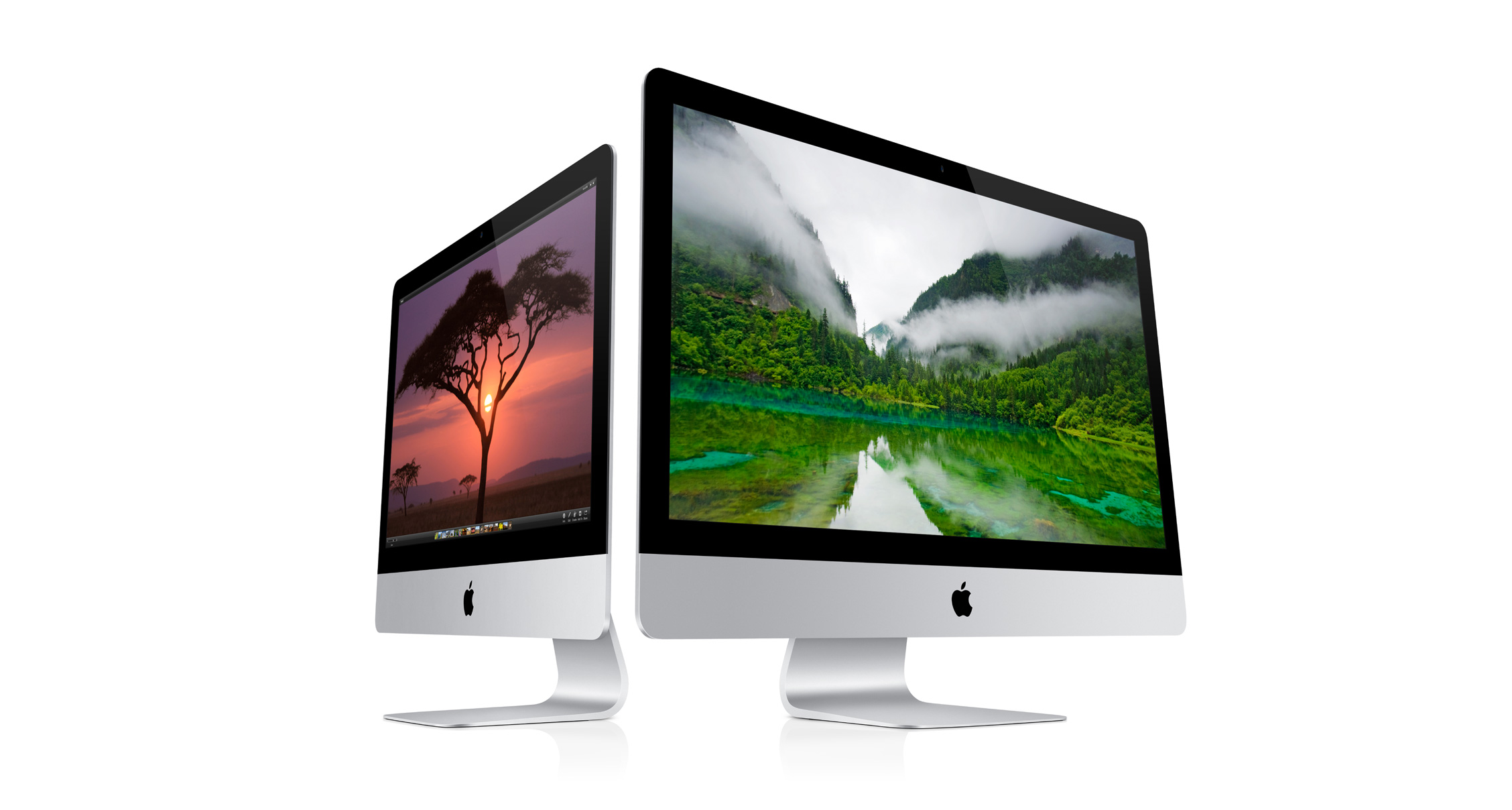 The iMac continues to be available in 21.5-inch and 27-inch models, and the screen resolutions have not changed from the previous generation’s 1920-by-1080 and 2560-by-1440 pixel counts. But they should look better, since Apple has now laminated the screen to the front glass, eliminating a thin air gap, and has used a plasma deposition process to put an anti-reflective coating on the display that reportedly reduces reflection by 75 percent. Those who have bemoaned Apple’s focus on glossy displays will undoubtedly appreciate this change. Topping it
off, Schiller said that each display is individually calibrated coming off the manufacturing line.

Performance should be good (though not necessarily that much better than the previous models), with a range of quad-core Intel Core i5 and i7 processors (speeds depending on the model and build-to-order choice), 8 GB of RAM by default, and support for up to either 16 GB (21.5-inch model, only at order) or 32 GB (27-inch model, via four user-accessible DIMM slots) of RAM. Storage also varies by model, with the smaller iMac coming with either a relatively slow 5400-rpm 1 TB hard drive or a 1 TB Fusion Drive (more on that in a moment), whereas the larger iMac offers a 7200-rpm 1 TB hard drive, a 3 TB hard drive, 768 GB of flash storage, or a 1 TB or 3 TB Fusion Drive.

Other features include dual microphones and better stereo speakers, a FaceTime HD camera, headphone jack, SD card slot, four USB 3.0 ports, two Thunderbolt ports, and a Gigabit Ethernet jack. Wireless connectivity remains stable with 802.11n Wi-Fi and Bluetooth 4.0. Graphics are provided by a range of Nvidia GeForce GT graphics processors, starting with the 640M or 650M with 512 MB of GDDR5 memory in the smaller iMac, and going to the 660M with 512 MB of memory or the 675MX with 1 GB of memory in the larger model, with the 680MX with 2 GB of memory as an option.

The price range remains essentially the same, with the entry-level 21.5-inch iMac starting at $1299, and the high-end 27-inch iMac at $1999. It’s unclear how the build-to-order options will affect the final prices, because these iMacs aren’t yet available and thus can’t be configured in the online Apple Store. The 21.5-inch model will ship in November 2012, Apple says, to be followed by the 27-inch model in December.

As is often the case when Apple replaces a Mac model, it’s hard to say much bad about the new iMacs, apart from the loss of the SuperDrive, awkward positioning of the SD card slot, and the lack of user-accessible RAM in the 21.5-inch model. Otherwise, they look great, should have excellent performance, and cost basically the same as before. I can’t get as excited as Phil Schiller did about how thin and light the new models are, given that they’ll just sit quietly on your desk — we’re not talking about a MacBook Air here. 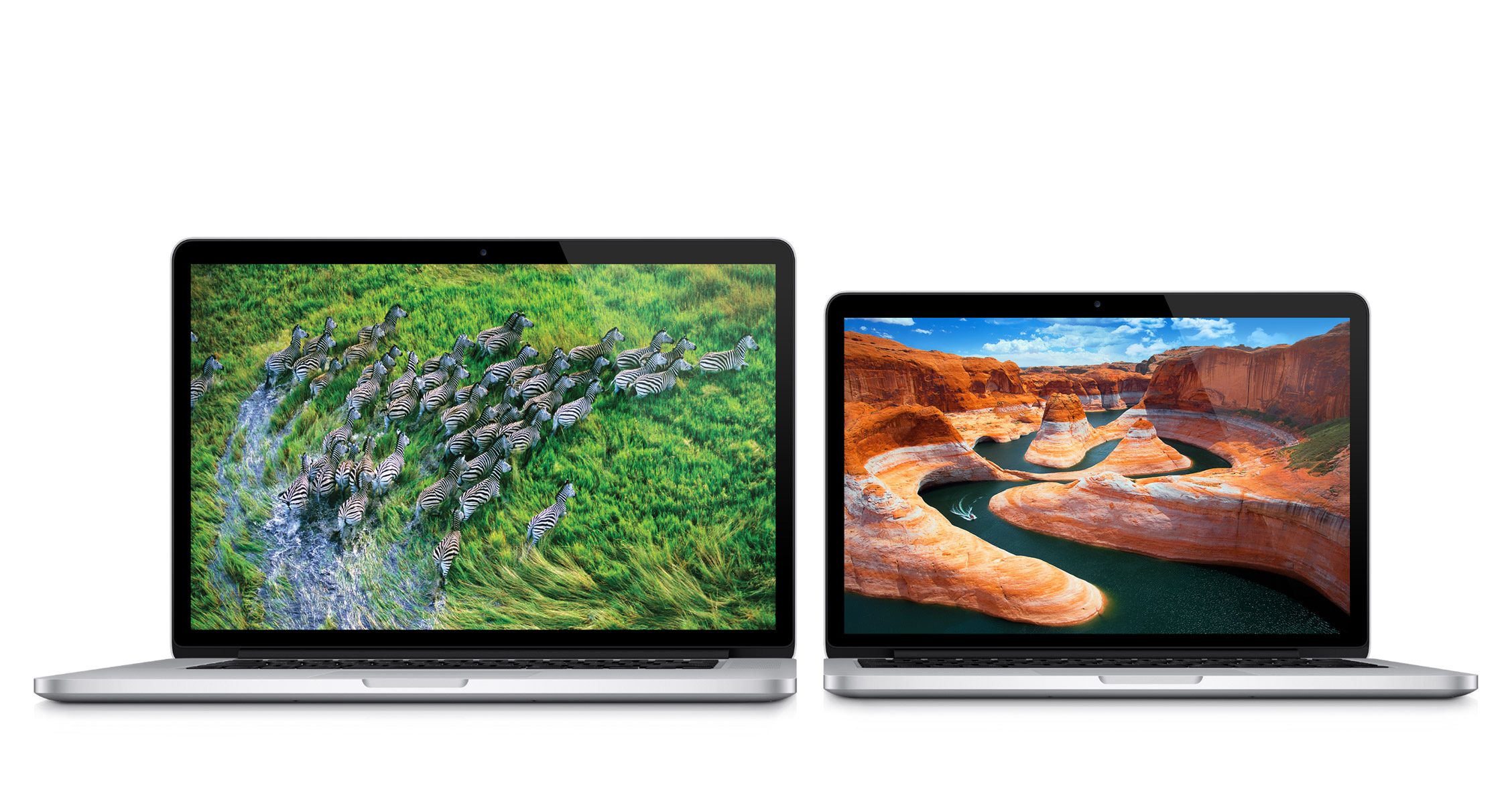 The drop in weight is likely due mostly to eliminating the SuperDrive; also missing from the new 13-inch MacBook Pro are Gigabit Ethernet and FireWire, both of which can be added back with optional Thunderbolt adapters. Speaking of which, it has two Thunderbolt ports, two USB 3.0 ports, an HDMI port, an SDXC card slot, and a MagSafe 2 power jack. 802.11n Wi-Fi and Bluetooth 4.0 are standard. It has a beefier battery (74-watt-hour, up from 63.5-watt-hour) to power all those pixels, but Apple still claims the same “up to 7 hours wireless
Web” battery life.

On the performance side, you have the choice of a 2.5 GHz dual-core Intel Core i5 or a 2.9 GHz dual-core Intel Core i7, both with 8 GB of RAM. Although the online Apple Store implies there are two models, the only difference is the base amount of flash storage: 128 GB or 256 GB. You can also choose 512 GB or 768 GB of flash storage (for a lot more money), but the Fusion Drive from the new iMac is not an option. Graphics are courtesy of an Intel HD Graphics 4000, the same integrated graphics chip used by all other MacBooks (though the 15-inch models add discrete Nvidia GeForce GT 650M processors).

The real question is how this new 13-inch MacBook Pro with Retina Display stacks up against both the old 13-inch MacBook Pro, which remains available, and the 13-inch MacBook Air, which is thinner and lighter, but slower and somewhat less customizable. The new model starts at a $500 price premium over the others. I would encourage those who are interested in one to look at the screen side-by-side with one of the less-expensive 13-inch MacBooks, since that’s the most significant difference, and you’ll want to make sure it’s worthwhile.

The new 13-inch MacBook Pro with Retina Display starts at $1699 and is available immediately.

Mac mini Gains i7 CPU Option — Last, and definitely least, Apple upgraded the Mac mini with new CPUs, swapping the base 2.3 and 2.5 GHz dual-core Intel Core i5 CPUs (with an option for a 2.7 GHz dual-core Intel Core i7) for a 2.5 GHz dual-core i5 and a 2.3 GHz quad-core i7 at the base level, and offering a 2.6 GHz quad-core i7 as an option. Apple claims these new CPUs are up to twice as fast, and their integrated Intel HD Graphics 4000 processors are also up to 65 percent faster than the previous Intel HD Graphics 3000 processors.

The main other changes I can find is that the Mac mini switches from USB 2.0 to USB 3.0 and comes standard with 4 GB of RAM that can be upgraded to 16 GB, up from a previous max of 8 GB. The $599 model comes with a 500 GB hard drive and its only option is for more RAM. In contrast, the $799 model comes with a 1 TB hard drive and offers options of more RAM, the 2.6 GHz quad-core i7 processor, a 1 TB Fusion Drive, and 256 GB solid-state drive. The new configurations are available immediately.

As with the previous generation, the Mac mini lacks a SuperDrive, leaving only the 13-inch and 15-inch MacBook Pro and the Mac Pro with internal SuperDrives.

A Burgeoning Product Line — We’ve come a long way since Steve Jobs hacked and slashed at Apple’s Mac line until there was a simple 2-by-2 matrix of consumer (iBook and iMac) and professional (PowerBook and Power Mac) models. Apple now sells ten different Mac models, and keeping them straight is becoming increasingly difficult. While writing this article, I found myself looking at the wrong specs several times, and even Apple now feels the need to provide comparison pages.

There are two ways to look at this trend toward a larger product line. The glass-half-full camp would say that it is evidence of Apple’s increasing share of the market and overall position. As Apple attracts more users, it becomes more important to offer slightly different models to fit the needs of people who would otherwise turn away from a single model in any given category. That’s especially true in the laptop world, where most sales are these days, and where Apple now sells six different models.

The glass-half-empty people would warn that the exact reason that Steve Jobs pared down the product line remains true: customer confusion. Apple has always prided itself on simplicity, but when three of ten models are 13-inch laptops, customers are being asked to make increasingly finely grained decisions. Plus, even for a company as large and powerful as Apple has become, maintaining focus on all these different products is difficult — witness the delayed ship dates for the new iMac models.

Realistically, I don’t see the increasingly large product line causing significant problems for Apple in the near future. I mention it more as something to keep an eye on, because if the Mac product line were to jump to 50 models, that might be an indication that the company was losing its way. For now, we can just enjoy the fruits of Apple’s continually excellent hardware design.