Amid all the hardware announcements with which Apple pummeled the press during its media event on 23 October 2012 were two briefly mentioned software updates: one to iBooks, Apple’s iOS app for reading ebooks and for obtaining them from the iBookstore, and one to iBooks Author, Apple’s Mac app for creating Multi-Touch books for education and other markets.

Active Readers, Rejoice! — From the beginning, the iBooks app has let readers highlight passages and add notes to them. These notes and marks have been a boon to active readers, albeit a restricted and frustrating boon: although you could mark up a book to your heart’s content, and quickly navigate to those notes and highlights within the book or even see them in the same book when reading it on a different iOS device (that is, one using the same Apple ID for its iBookstore account), those notes and highlights remained locked to that book and Apple ID.

Furthermore, because of the digital rights management (DRM) restrictions implemented in the iBooks app, while you could export your notes, you got only the notes themselves, not the passages to which you had attached the notes — even if the book itself was not protected by DRM! And you were completely prohibited from copying any selected text in a DRM-protected book to quote it in another context, such as in a review or a paper for school. While half a loaf is better than none, the state of notes, quotes, and highlighting in iBooks was a moldy half-loaf indeed for the student or active reader (for a larger serving of this moldy loaf, see “Notes, Quotes, and iBooks,” 7 April 2012).

The latest iBooks goes a fair way toward providing a better and more nutritious serving of readerly bread. With iBooks 3.0, the draconian DRM restrictions have been eased: you can now select a passage and copy it, email it, send it via Messages, or post it to Facebook or Twitter. It seems that someone finally convinced Apple and the publishers that stock the iBookstore that sharing favorite lines and passages from a book is a great way to spread the word about the book. The fact that this feature also will help both student writers and reviewers is butter on the bread.

And there’s jam, too: you can now share selected notes via email or printout, and those notes now (finally!) include the text to which they were attached. For protected books, the email includes a link to the iBookstore so the person to whom you send the notes can buy a copy, along with a disclaimer stating that the quoted passage may be subject to copyright. It’s a fair compromise and makes the act of marking up a text in iBooks much more useful for both students and social readers. iBooks 3.0 also enables those for whom paginated books seem far too new-fangled to peel away 2,000 years of history and return to the scroll: a new book theme, Scroll, presents a book as one long scrolling page, whether in portrait or landscape orientation. However, the notion of pages is still present: iBooks shows page numbers to the side as you scroll through the book, and also adds page breaks between sections such as chapters in some cases.

iCloud enhancements make their way into the iBooks 3.0 update, too. A new collection, Purchased Books, has been added that contains all the books you’ve ever obtained from the iBookstore. Those not currently on your iOS device have a cloud icon on their thumbnails: tap it, and iBooks downloads the book to your device.

iBooks 3.0 will also become edition aware: when new editions of books you own are released in the iBookstore, a badge will appear on the Store button in iBooks. According to Apple, you can then download the new version for free. Although the feature isn’t yet live for all publishers on the back end of the iBookstore and it isn’t quite clear how it will be used, it should be welcome news to schools and teachers who have begun to make use of iBooks in education, especially for those teaching in the sciences where textbooks with outdated information are all too frequently kept in use because of budgetary limitations. We have also been tremendously frustrated with the iBookstore on the Take Control side, where we could upload new
versions but were given no way to alert customers to redownload.

Finally, iBooks 3.0 has one feature that should appeal to educators: it provides compatibility with the latest features available in books created by the newly revised iBooks Author.

New Author Tricks — iBooks Author, which Apple released in January 2012, was aimed at publishers and aspiring textbook authors. The first version of this Mac app offered a variety of book templates, interactive widgets, and powerful formatting capabilities for anyone interested in publishing interactive books via the iBookstore.

With iBooks Author 2.0, released at the same time as iBooks 3.0, Apple has further polished an already glossy book creation application for individual authors. For starters, this latest version of iBooks Author has expanded the range of templates it offers from the original six to fifteen.

Even better, some of the new templates offer new capabilities: while the first generation of iBooks Author provided templates that were designed primarily for books intended to be read in landscape view, the Multi-Touch format’s support for portrait orientation seemed something of an afterthought: it concatenated the individual pages seen in a book’s landscape view into scrolling swaths of text when the book was viewed in portrait orientation.

In iBooks Author 2.0, however, Apple now offers templates designed for books that are specifically intended to be read only in portrait orientation. In fact, the Template Chooser in iBooks Author is now divided into two sections: Landscape with Portrait, comprising nine templates (up from the original six), and Portrait Only, with six new templates. And, in a change that is sure to please book layout artists, the new vertical templates provide actual pagination: you can now design a Multi-Touch book specifically for vertical orientation that contains individual pages with page numbers (extremely important for textbooks, where reading assignments often involve page ranges).

Apple has also added two new interactive widgets to the seven provided with the original iBooks Author: pop-overs and scrolling sidebars. Pop-overs provide the capability of adding images to a page with captions that pop up when the reader taps the image. These pop-over captions can be anything from a short label to a full-blown essay containing embedded images of its own, through which the reader can scroll. 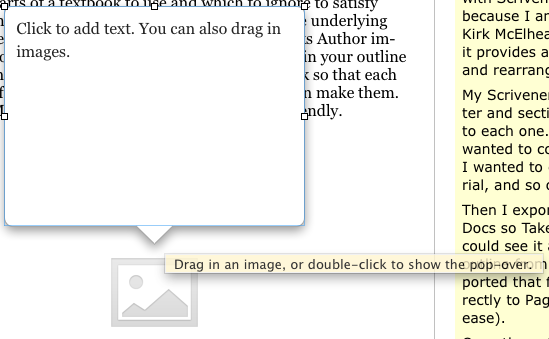 Scrolling sidebars are like the pop-overs without the pop: you can design a sidebar that contains both text and images, just like a pop-over. However, unlike the pop-over, the sidebar itself resides on the page. You can modify the border and the background of the sidebar to make it stand out from the regular text flow in your book. 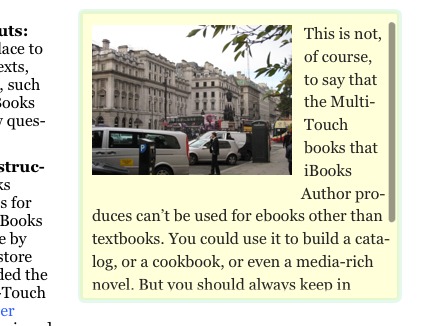 And a few other niceties made the cut in iBooks Author 2.0: the range of supported fonts has been expanded significantly, and the Media widget does a much better job of handling audio-only media, including enhanced playback controls and the capability of adding an image to accompany the audio widget on the page. Publishers are now also able to embed their own fonts into books.

There are no changes to the restrictive iBooks Author license agreement, which states that works in the .ibooks format may be sold only in the iBookstore or distributed for free. That remains a limitation for publishers unwilling to limit themselves to the little-used iBookstore or unable to afford the manual effort to produce books in multiple formats. Similarly, iBooks Author 2.0 adds no workflow features that would make the program a welcome tool in a professional publishing process, where manuscripts are worked on simultaneously by authors, editors, and illustrators.

Book ’em! — Between iBooks 3.0 and iBooks Author 2.0, Apple continues to pay attention to its bookish users, with enough new capabilities to make both readers and solo authors (if not publishers) happy. For me, though, the happiness is tempered by the realization that I have to start work on an update to “Take Control of iBooks Author” right away.