We’ve never liked iCal, and its new Calendar guise under OS X 10.8 Mountain Lion doesn’t address most of our complaints. The awful leatherette look remains, editing existing events is still clumsy, the lines and dates remain extremely faint, and so on. Honestly, though, we seldom worried about all these issues because there was an alternative that did everything we wanted: BusyCal from BusyMac. While working with exactly the same set of calendar data, BusyCal was easier to use and easier on the eyes.

BusyCal 2’s New Features — BusyMac has now released BusyCal 2, focusing on making the program even more flexible and powerful. The Week and Month views are customizable, so you can set how many days appear in a week, and how many weeks appear in a month. The Year view now displays a heat map so you can tell how busy days will be at a glance. Those who rely on their calendars for tracking billable hours will appreciate the improved List view, which features custom date ranges, sorting, and new columns like Total Duration. There’s also a 10-day forecast with weather and moon graphics, with your location automatically determined by Location Services. 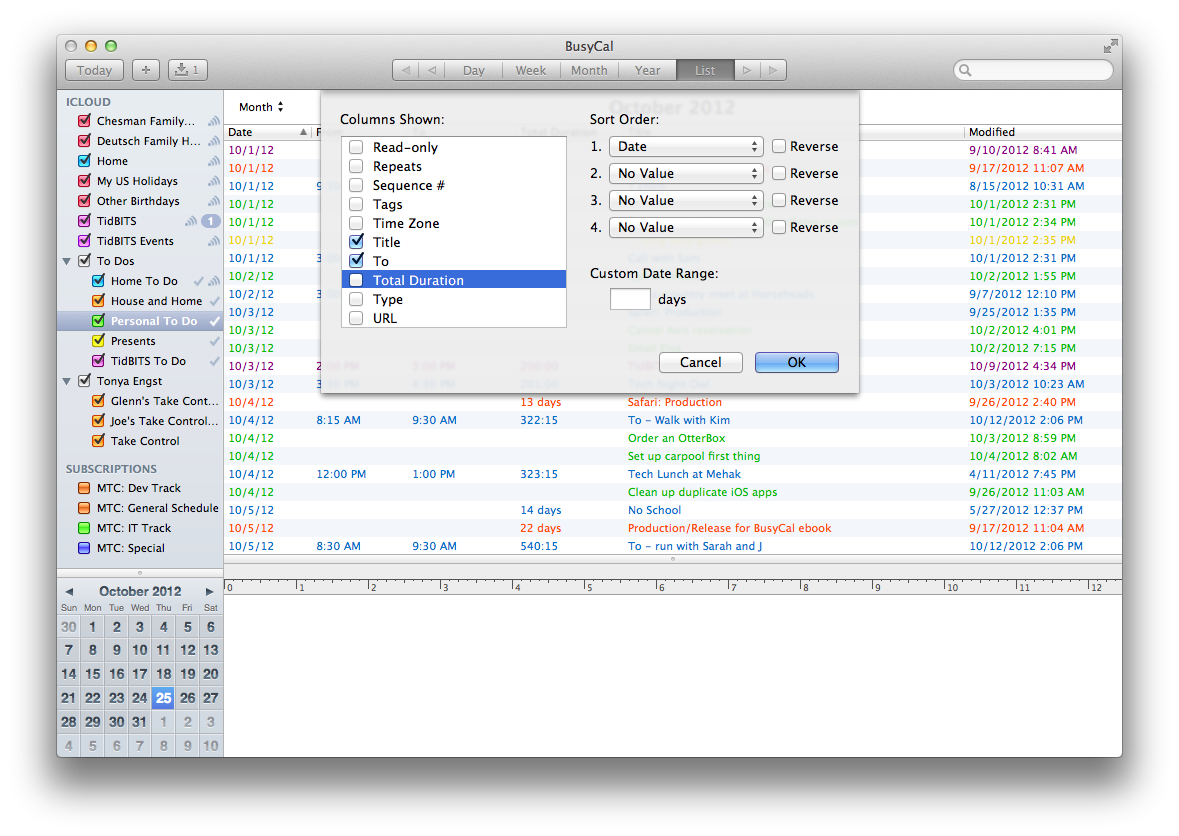 Working with events has also improved. The Info panel features better date entry with support for arrow keys and a date picker. New event defaults let you specify the default calendar, start time, duration, and alarms. If you prefer natural language, a Quick Entry feature lets you create events by typing, for instance, “Call Glenn at 2 PM on Friday.” Or, if you’re more of a menu bar person, a new BusyCal menu lets you view your schedule and create events directly from the menu bar. I’m not a big graphics
guy, but there’s even a new Graphics Panel that lets you display icons on specific dates — it comes with 700 emoji and an IconFinder feature that brings in graphics files. 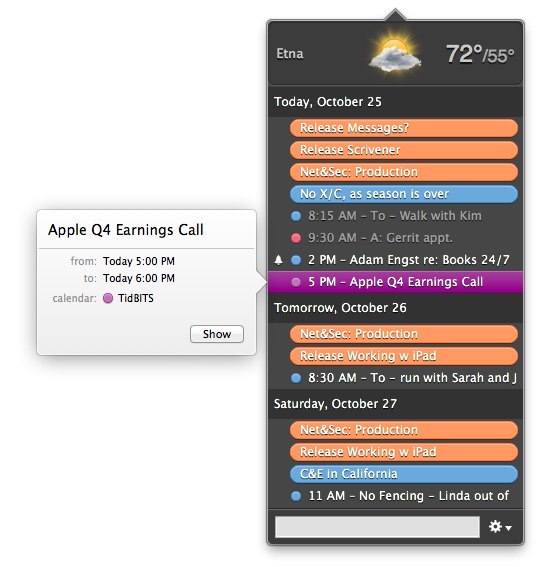 Other enhancements make it easier to find and view sets of events. Most notably, Smart Filters store sets of calendars, view settings, and event filters as toolbar buttons. With them, you can easily just look at holidays and birthdays, for instance, or clear out the non-essential events to focus on just those calendars that you share with work colleagues. Also welcome is a new Find dialog that helps you find individual events scattered throughout your entire calendar, independent of the current view. 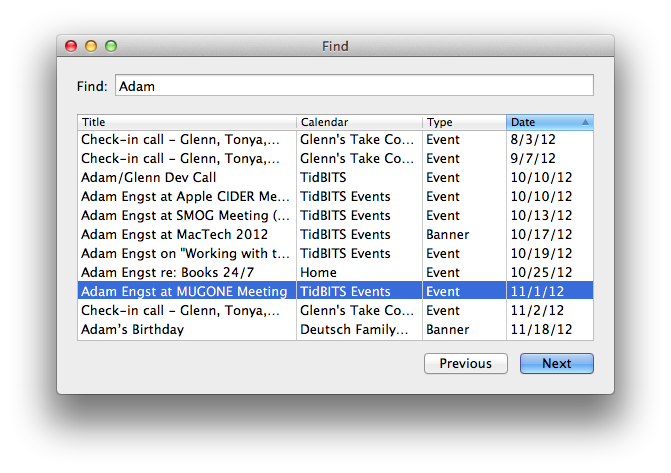 From a system standpoint, BusyCal 2 supports Mountain Lion technologies such as Notification Center and sandboxing, along with gestures (two-fingered swipe to navigate chronologically). Also, iCloud support has been improved, with full support for calendar sharing and inbox notifications. Unlike earlier versions, BusyCal 2 runs only on Mountain Lion.

What’s Missing from Previous Versions — Along with these improvements, BusyCal 2 does lose a few features, most notably republishing. In previous versions, you could take an iCloud calendar and republish it to Google Calendar, for instance, or republish a Google Calendar on your LAN. (BusyCal retains its LAN sharing capabilities, but they’re mostly of interest for those whose Macs aren’t compatible with iCloud or who can’t allow their schedules to exist on outside servers.) BusyMac removed republishing because it was inherently fragile; due to the many variables involved in the process that were beyond
BusyCal’s control, republishing often didn’t work reliably, and it led to considerable confusion and grief. It also encouraged unnecessarily complicated calendar setups. These tradeoffs were more worthwhile during the days of MobileMe, when BusyCal often served as an essential link in a Rube Goldberg-like calendar machine. But with generally reliable iCloud and Google Calendar syncing and sharing, BusyMac felt that republishing was no longer worth the trouble to most users.

Another feature that has been removed for similar reasons is publishing a calendar to Google Calendar (instead, you should host the calendar on Google Calendar itself and subscribe to it). Also, since Apple has deprecated Sync Services, the underlying technology in Mac OS X that enabled syncing of data with other local applications and devices, Sync Services no longer works reliably, and BusyMac has removed support for it in BusyCal 2. One consequence of this removal is that you can no longer sync local BusyCal calendars with Microsoft Entourage or Outlook (although syncing cloud-based calendars still works fine).

Take Control of Calendar Syncing and Sharing with BusyCal — BusyCal is a fine single-user calendar app, but the reason we started using it initially was because it enabled certain calendar sharing capabilities that we had become accustomed to in Now Up-to-Date, but that Apple’s programs and services didn’t support. Apple eventually brought those features to iCal and Calendar via iCloud, and while BusyCal remains a better program than Calendar in nearly every way, its calendar syncing and sharing features are now essentially the same as Calendar’s (except for LAN sharing, which Calendar doesn’t support).

Thanks to BusyMac’s sponsorship, that book — “Take Control of Calendar Syncing and Sharing with BusyCal” — is now available for free, and you can download a copy from either BusyMac’s Web site or the Take Control Web site. It’s 45 pages long, and although it focuses on BusyCal 2, it also touches on the OS X and iOS versions of Calendar when appropriate, since BusyCal users are likely to be more involved with their calendars than the Calendar users with whom they’re sharing. It’s very much not a how-to guide to BusyCal, though, since BusyMac’s online documentation handles that task. As with all of Joe’s titles, it’s a good read, and is
especially worthwhile if you’ve ever felt confused by all the possibilities surrounding syncing and sharing calendars with iCloud and Google Calendar (or other CalDAV servers).

(To add a downloaded copy of “Take Control of Calendar Syncing and Sharing with BusyCal” to your Take Control account, make sure you’re logged into your account in your Web browser, then click the Check for Updates button on the cover of the PDF. Even that’s not necessary if you add it (for free) to an order of other books, since all ebooks purchased through the Take Control cart are automatically added to the account associated with the email address you use.)