I lost on Jeopardy, baby, but after winning twice. After a lifelong interest in all things trivial, I took the screening test for the long-running TV show in 2011, was called to an in-person audition that August, and then was tapped to tape shows in August 2012 that aired in October. (I wrote up a more complete behind-the-scenes tale for BoingBoing and my strategy for studying at The Economist. I also talked about the show on The Incomparable podcast.) 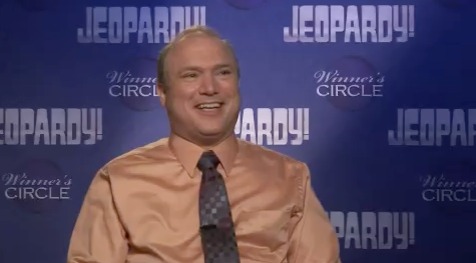 It is a fascinating thing to be sucked into a mainstream cultural phenomenon, but it also tells you something about what “broadcast” television has become. When I alerted folks a few days before my first appearance, the outcome of which I kept secret, that I would be on Jeopardy, the near-universal response among most of my friends and colleagues was, “I used to watch that show all the time!” It turns out that, like my household, many people I know have cut the cable and satellite TV “cord,” and either don’t
live in broadcast range or never considered installing an indoor or outdoor ATSC antenna for digital television broadcasts.

Jeopardy is a syndicated program carried by hundreds of American television stations; it used to have a worldwide reach, but in recent years that has contracted back to our shores. In syndication, the show sells advertising and sponsorships that appear nationally as part of the program, and local stations in turn sell advertisements as well. Stations pay Sony Pictures Television, the production company, to air the show in their local market.

Jeopardy isn’t streamed, sold as digital downloads, or made available on DVD or Blu-ray except for a handful of episodes from several years ago in a small collection. It’s a strange phenomenon in the Internet era to have a program that not only must be watched via a broadcast station, but can never be viewed again once it’s aired unless it’s re-run. A few clips are on YouTube — including the last few minutes of my first win — but the company clearly monitors the Internet carefully, as I have found it impossible to find complete episodes anywhere. (Jeopardy reruns are fairly popular. In some
markets, a station may show two reruns each day plus a new episode. In others, such as Seattle, new episodes air on weeknights and a rerun appears on Saturdays.)

As a result, I had a huge cheering squad on Twitter and Facebook, but only a subset of those people could watch any of the episodes. I threw a viewing party and invited quite a few local friends and family, partly so they’d get to see my first episode on Thursday, 18 October 2012. (My shows were aired Thursday, Friday, and Monday. The program tapes five shows a day, typically on two successive days every two weeks. So I taped two episodes as the last two of the day on a Tuesday, and came back to lose first thing Wednesday morning.)

Other broadcast events also prevented the show from being seen on schedule or at all. On Thursday, for instance, a football game preempted Jeopardy in the San Francisco Bay Area, which prevented a large number of technology friends from seeing the show. In other places, Jeopardy aired later that night. On Monday, the presidential debates bumped or delayed the airing of my ignominious defeat. Good! (I made an excessive wager on a Daily Double near the end, lost everything, and came back with $2000 into the final round, where I had the right answer, but wagered $0 since I couldn’t beat the leader. This assured me a second-place finish, which comes with $2000 rather than the $1000 that third-place contestants receive.)

Jeopardy currently has about 9 million nightly viewers and about 25 million different people across a viewing week. It once had 50 million viewers, according to one of several books on the show. Ken Jennings, the winner of 74 consecutive episodes of the show, said he was recognized on the street for quite a while after his run in 2004, but nowadays, only 70-year-olds notice him. This is close to the center demographic on the show, which I can testify to given my popularity at my in-laws’ retirement home after two episodes were aired.

Given the intense interest in trivia among younger people, it’s odd that Jeopardy hasn’t reinvented itself completely for a new generation. While the show has a Web site, it’s mostly devoted to information about the broadcast show. Its Twitter feed, with 20,000 followers, just posts clues and little else. There’s a Facebook game, but it’s only similar in form, not nature, to the TV program.

Jeopardy is in its 29th season of its run with Alex Trebek in the current format, and I would hate to think that it’s petering out. The show is exciting, well designed, and fun to play at home. My kids have developed an addiction even though they know few of the right “questions.” But unless Sony figures out a way to thread a path into a world of streaming, deferred, and on-demand post-broadcast watching, I worry that I’ll be among the last group of champions instead of part of an ongoing tradition.

Comments About Winning and Losing on Jeopardy