Move along, there’s not much to read here, because I failed to find how Apple designed this functionality. You cannot “delete” apps from your account, but you can hide them, and unhide them later if you wish. Hiding an app removes it from your Purchased list. As far as I can tell, the best way to hide an app is in iTunes: Click iTunes Store, then click the Purchased link in the Quick Links box on the right. Click Apps at the top, mouse over an app icon, and click the X button that appears in the upper left corner. To unhide an app, you must click your email address in the upper right corner to load your iTunes account, scroll down to iTunes in the Cloud, click View Hidden Purchases, click Apps, and then click the appropriate
Unhide button. Although an Apple support article claims you can hide apps in iOS too, swiping left and right on items in the Purchased list did nothing in iOS 6.0.1; in iOS 5 it works. Unhiding purchases in iOS 6 does work: in your account, available from the bottom of the Featured screen, there’s a Hidden Purchases button under iTunes in the Cloud. To address my final complaint, the Purchased list in iTunes can be sorted, as can the Purchased list on an iPad; only the iPhone and iPod touch can’t sort the list.] 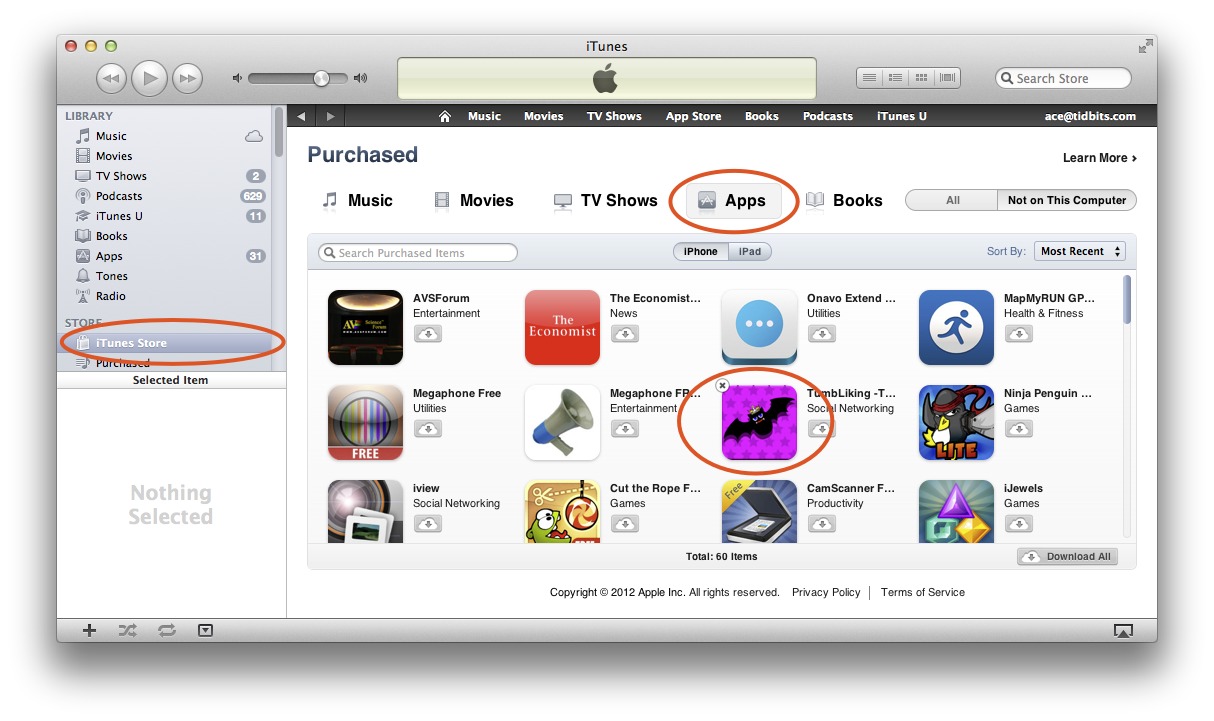 End mea culpa. Read further only if you’d like to see how someone who spends a lot of time on this stuff can still be unaware of deeply hidden functionality. I could complain about how a better and more discoverable interface would be to enable app hiding from the Apps screen in iTunes, and how it’s very odd that this doesn’t work in iOS 6, but the fact is, the article asks for a feature that does exist.

I recently set up my iPhone 5 from scratch (see “Solving iOS 6 Battery Drain Problems,” 28 September 2012), and one of the things I lost was my app selection and home screen organization. This was no great hardship, mostly because I have long been overwhelmed by the number of iOS apps I have on my devices, to the point where I mostly use Spotlight to launch anything but apps on my Dock and first two home screen pages. This is, I believe, evidence that Apple’s Springboard home screen concept needs to be scrapped and replaced with something that both scales to accommodate large numbers of apps and enables information-centric screens that let you avoid launching an app just to see some
data. Whether Apple will ever do this, it’s impossible to say.

But what Apple could do — and should do — is give us full control over our apps. You can, of course, choose which apps appear on any given iOS device, and delete apps that you don’t want. You can even, if you sync via iTunes instead of iCloud, delete them from your Mac.

To delete an app on an iOS device, tap and hold on any app icon, until the apps all start to jiggle, and then tap the X button on any non-default app to delete it. In iTunes, click Apps in the Library section of the sidebar. Then select an app, press Delete, confirm that you want to delete the app, and in the second dialog, click Move to Trash. (As an aside, if you use a relatively small SSD or are generally low on disk space, look in your Mobile Applications folder — Control-click any app in iTunes and choose Show in Finder — and you can manually delete old versions of apps that are still sticking around. I cleared over 7 GB of unnecessary files that way.) 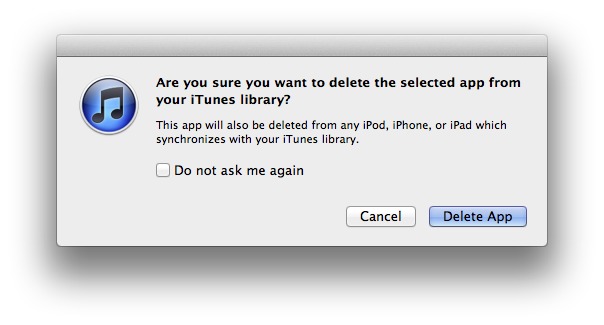 Deleting apps in these ways are somewhat fussy procedures, though, and should you ever set an iOS device up from scratch, you will have to look through all your apps to determine which you want. If you’re syncing with iTunes, that may not be too bad, but if you’re downloading from the Purchased list in the App Store app, it’s going to take
time to sort through everything. That’s because, no matter what, you cannot delete an app from your Purchased list.

This has been an annoyance for me, and for writers like me who test a great number of apps, for some years. For instance, back when iOS was inadvisedly caching iTunes Store authentications for 15 minutes, thus enabling accidental in-app purchases by kids, I downloaded a free app with in-app purchases called Fishies to test the scenario. I don’t even remember what Fishies does any more, and I certainly don’t want it for anything. But no matter how hard I try to eradicate it, Fishies stubbornly sticks around. The same is true of an untold number of other apps — after the release of Passbook in iOS 6, I quickly downloaded the United app, the Target app, the Starbucks app, and the Valpak app, just so I could see what the Passbook
experience was like (the Valpak app is the best for getting coupons into Passbook, seeing how they work, and deleting them with Passbook’s excellent shredder animation). Of these, only the United app is likely to be of any use to me going forward, but I’m stuck with the rest until the end of time.

I haven’t raised this issue previously because I figured I was an outlier due to my position as a technology writer. But I think the greater world has now caught up with people like me. Nielsen reported earlier this year that iPhone users have an average of 41 apps. That’s an average, and with the massive number of iPhone users out there, that says to me that there are millions of people who have as many apps as I do or more. And a commenter on another article said that he has trouble in iOS 6, because the App Store app crashes whenever he tries to load his 3000-app Purchased list — I thought my 360 apps was a lot! Clearly, it’s just too easy to download free and inexpensive apps.

That’s not even the entire story. 21 percent of iOS apps are launched only a single time, and only 35 percent are launched 11 or more times, according to the app analytics firm Localytics. (That 35 percent is actually pretty good; only 23 percent of Android apps are launched 11 or more times, and in general app retention improved from 2010 to 2011.) Still, assuming that it’s safe to say that an app that isn’t launched at least 11 times has basically been ignored, nearly two-thirds of all iOS apps are sitting unused, cluttering our devices and our accounts.

So Apple, give us control over our purchases, and let us eradicate those apps from our accounts. Just because we pick up a newspaper on the way to work doesn’t mean we have to keep it for the rest of our lives, and apps shouldn’t be any different. Downloading or purchasing an app is an extremely lightweight action, which isn’t bad, but such simple actions should be easily reversed as well.

Oh, and in the process, please provide the capability to sort the list of purchased apps in the App Store app by name as well as by purchase date? It’s damnably difficult to find anything in that massive scrolling list if it isn’t among the most recent apps.

Comments About Apple, Let Us Delete Apps for Good