For those just joining this story, ever since the release of iOS 6, some users have seen significantly increased cellular data usage even though their usage patterns haven’t changed. By “significantly increased,” I mean changes in the tens or hundreds of megabytes per month, and for fewer people, as much as gigabytes. Particularly for those who have been happily paying $15 for grandfathered-in 200 MB per month plans, this excessive data usage has come at a steep cost, at least in proportion to what the costs should be. 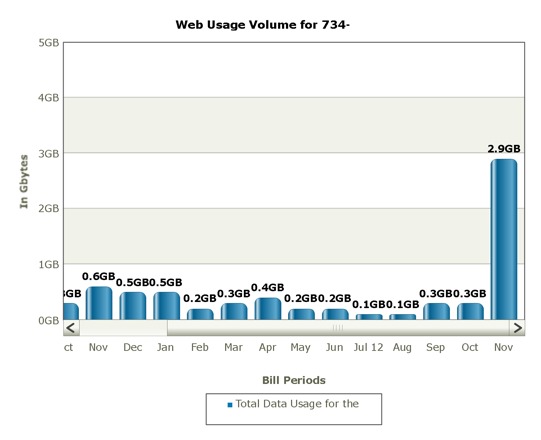 We’ve been writing about this issue for a while, starting with Glenn Fleishman’s “What’s Behind Mysterious Cellular Data Usage in iOS 6?” (29 September 2012). Next, Matt Neuburg gave the problem an even closer look in in “Mysterious iOS 6 Cellular Data Usage: A Deeper Look” (24 October 2012). Most recently, Glenn wrote about a bug that caused iOS 6.0 to consume excessive amounts of bandwidth (see “Public Radio Group Finds iOS 6.0 Streaming Bandwidth Bug,” 14 November 2012); although it was specific to iOS 6.0 and Wi-Fi, we believe it may be indicative of architectural problems within iOS 6.

Slowing down the sleuthing has been the lack of tools to identify which apps are consuming cellular data. Earlier this year, I was testing an app called DataMan Pro that offered exactly this functionality, but by the time this iOS 6 problem appeared, Apple had pulled DataMan Pro from the App Store, presumably because of the techniques it used to capture per-app usage data. I’ve been in contact with Johnny Ixe of XVision, the developer of DataMan Pro, the entire time, and after much back-and-forth, he has finally managed to get a new version of DataMan Pro through Apple’s approval process. (The first version to reappear in the App Store, version 6.0, lacked the per-app details; the current 6.1
version brings that feature back.)

DataMan Pro sports a utilitarian interface that could benefit from some graphic design enhancements, but it does what it claims to do, and it does so without requiring you to install a profile or send all your data through a proxy server, as some other apps do. Once you install it, the first step is to configure its settings, which you do by tapping the gear icon in the upper left of the Current Usage screen. In the main Settings screen, you set your bill date, and how much data you want to allot yourself each day, week, and month. You can choose how to divvy up your data by day and week, but the month number should generally match the cap on your data plan. You can also set alert thresholds that will fire real-time notifications
whenever your usage exceeds a threshold for any of the three data allowance settings. It’s important to make sure Precise Tracking is on, since that’s necessary for DataMan Pro to track usage on a per-app basis. Finally, if you care to track your usage by location, turn on geotagging and choose a level of accuracy; 3 kilometers is best for maintaining battery life. If you don’t care about location tracking, turning it off will save battery life somewhat, though I’ve never noticed DataMan Pro impacting my battery life in a significant way. 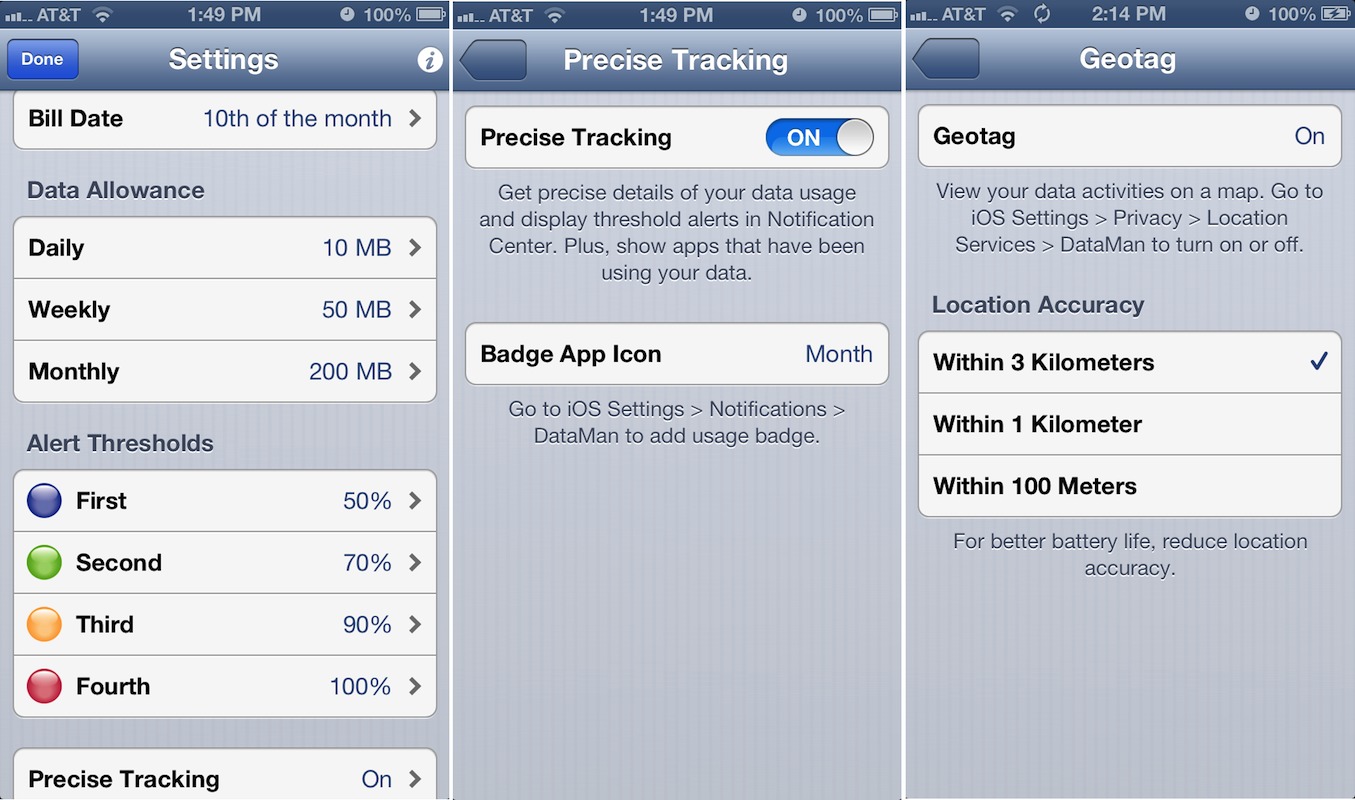 Once configured, there’s nothing more to do, apart from making sure that you don’t quit DataMan Pro from the multitasking bar. If you do, for whatever reason, just launch it again right away.

To evaluate your data usage, tap the Today, Week, or Month buttons on the Current Usage screen. Subsequent screens let you drill down further by day, hour, and ten-minute portions of an hour. In each case, the cellular data usage is listed first, in blue, and the Wi-Fi data usage is second, in grey.

At any level of data granularity you can tap the app button in the upper right corner to see a list of apps that used data during that time, sorted by the overall amount used. At the day level, a share button next to the app button lets you view your usage by location or export it as a comma-separated value file (which you retrieve via the Apps list in iTunes). Alas, the export file includes only time-based usage details, not per-app usage details. Once you’re into the hour or minute levels, you can only map your
data, not export it, so the share button changes to a map button. 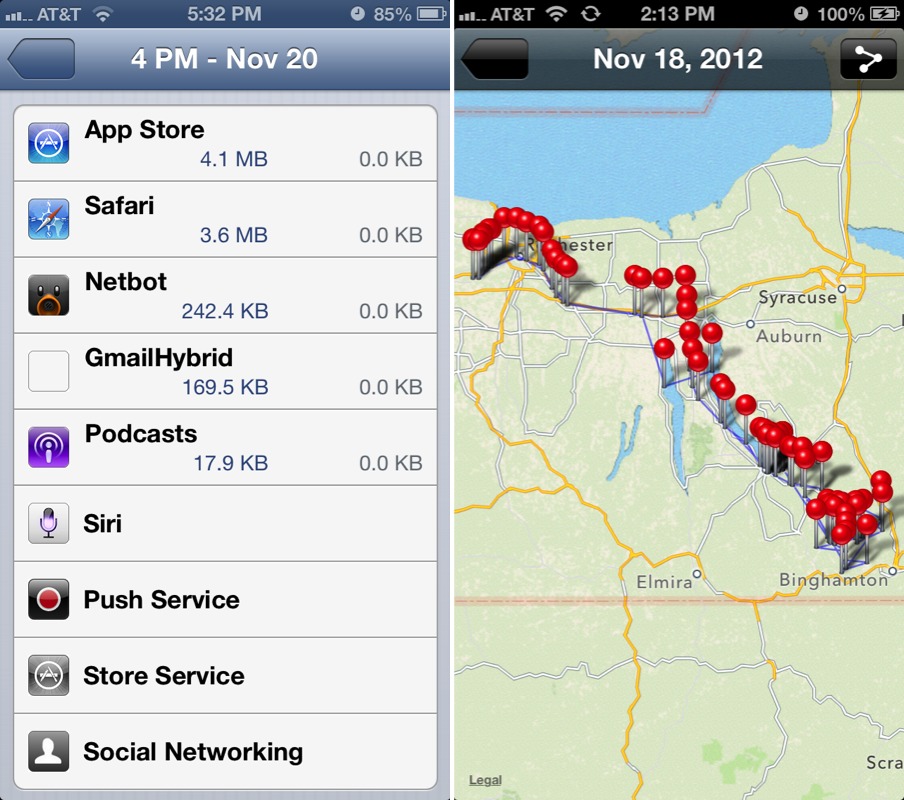 So, if you’re experiencing unanticipated cellular data usage, or you’re just curious about which apps are consuming your data plan, give DataMan Pro a try. It’s far from the prettiest app out there, but for per-app usage tracking, it currently can’t be beat. I can’t promise it will give you data that you can act on; it’s entirely possible that the “apps” it reports as using excessive amounts of data may be parts of iOS over which you as the user have no control whatsoever. But at least we’ll all have more
data to report to Apple.

DataMan Pro costs $9.99. I’ve used only the iPhone version of the app; the separate iPad version that has per-app tracking hasn’t yet been approved by Apple, so although you can get it now, it won’t have the per-app tracking capabilities you need until it survives the dash through Apple’s approval gauntlet.