I turned 45 a few days ago, and along with all the customary niceties of it being one’s birthday, I was treated to a pair of novel experiences that I just have to share.

AcoustiCards — Most notably, I got email from a long-time TidBITS reader and member named Paul Arnold, wishing me a happy birthday and doing a bang-up job of hacking the press in the process by sending me a personalized birthday song. Online birthday cards are nothing new, but this is the first time anyone has ever sent me a song, and there’s an interesting story behind it.

Paul is a BBC radio producer in the UK, and like many people in these uncertain economic times, was facing reduced hours a year ago. He responded by bringing to life his idea for an iOS app that would enable anyone to create a personalized song as a gift or greeting. His initial thought for taking requests for songs by email was dismissed as too expensive, and the notion of doing custom versions of “Happy Birthday” was shelved because of the intellectual property rights surrounding that song.

What he ended up creating takes full advantage of his radio production skills: AcoustiCards, a free iOS app that lets you create a jingle, a song, or a romantic song, each with a number of variations that are seamlessly mixed together into the final personalized track. The DJ-introduction jingles let you pick what’s happening (celebration, birthday, moving on), a place (mostly UK locations at this point, with more coming), a radio genre, and the person’s name. Songs are similar, but let you specify the recipient’s name and three interests, skills, or qualities — they’re perfect for birthday wishes. And romantic songs are based on a variety of things you love about the person and,
amusingly, whether one of you is a Star Trek fan. 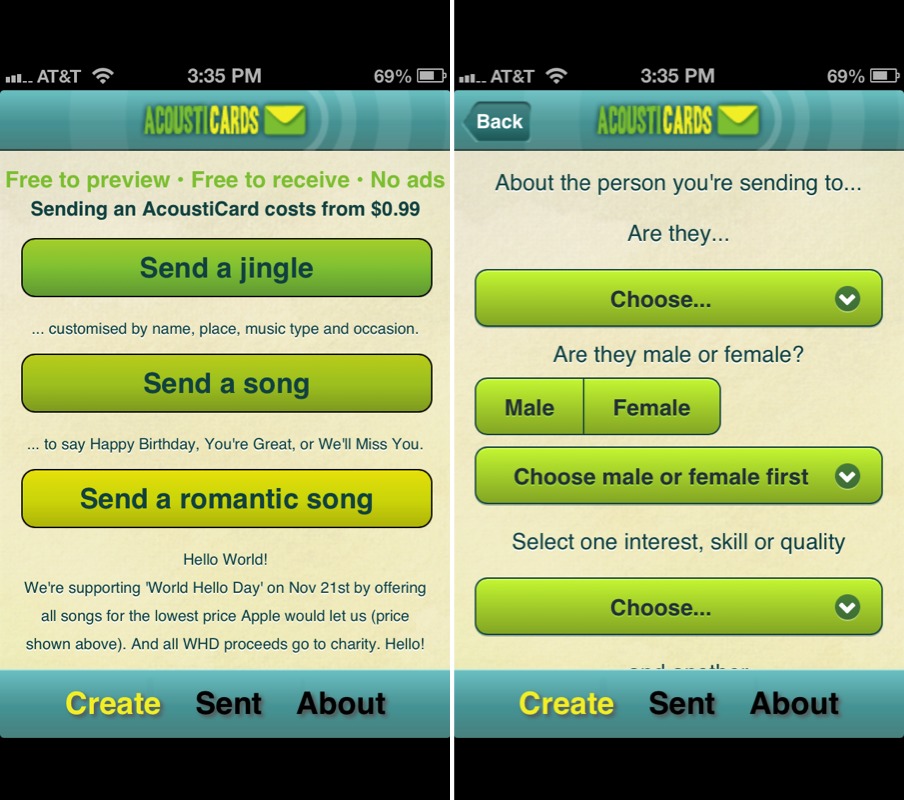 After a delay of up to two minutes while the app mixes together all the audio that Paul and his partners recorded — the lead vocalist is London-based jazz singer Sarah Ellen Hughes — you can listen to a preview of your song. (If you don’t hear anything, toggle your iPhone’s mute switch.) If the song isn’t quite as you want, you can go back and adjust settings and preview it again.

All that’s free, but if you want to buy the song it costs between $0.99 (for the 30-second jingles) and $2.99 (for the roughly 2-minute songs) as an in-app purchase. Once the purchase goes through, AcoustiCards gives you a link to the song on their server, and provides buttons for posting the link on Facebook or Twitter, or sending it via email. I whipped up a song for my sister’s upcoming birthday and sent the song link to myself, so I can forward it on to her on the appropriate day. (A future version of AcoustiCards could perhaps offer to schedule delivery of the notification so you could work up a birthday song in advance, and be sure it would be delivered on the right day.) When my sister follows the link, she’ll end up at a
Web page where she can listen to or download her song. 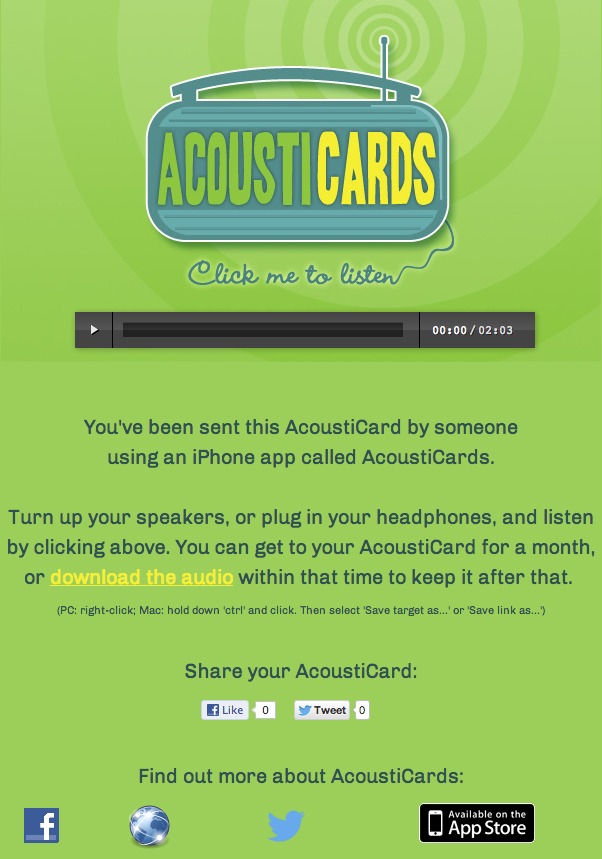 On 1 December 2012, AcoustiCards will add a $1.99 Christmas carol with seasonal lyrics, and $0.16 from each carol purchased will go to the UK charity Music As Therapy.

Honestly, I found a huge grin breaking out on my face as I listened to the birthday song Paul sent me, and when I demoed the AcoustiCards app to Tonya by building a romantic song for her, she got tears in her eyes. We understand how AcoustiCards works behind the scenes — it’s just mixing audio files extremely smoothly — but the personalization makes the results compelling regardless. Give it a try!

Facebook Gifts — I’m not a big fan of Facebook, and I mostly maintain an account there (which receives cross-posted tweets from Twitter) to stay in touch with what is clearly a significant aspect of the Internet for many people. But there is one thing I’ve become truly fond of Facebook for, and that’s receiving birthday greetings from friends and acquaintances. Since Facebook publicizes my birth date, I quite enjoy scrolling through lots of notes from well-wishers that give me a warm fuzzy feeling, and, in a rare instance of being better than email, seldom require a response.

This year brought a new twist to my Facebook birthday greetings, an actual gift from my buddy Chuck Goolsbee, who helps manage Facebook’s massive data center in Oregon. For those who have used Facebook for a long time, you might remember the capability to give people little icons (and if so, you probably remember it better than I do, since I thought the feature was entirely pointless). The new Facebook Gifts program, though, lets you purchase actual real-world gifts for your Facebook friends and relatives.

The gifts themselves come from over 100 companies and include food and drinks, housewares, flowers, baby- and kid-specific items, stuff for pet-oriented folks, and products that support charities. Prices range from $5 (a Starbucks gift card or a smiley face cookie) to roughly $150 (a Lindt basket of chocolate), with the bulk of the gifts priced between $20 and $50. They’re the sort of things you find in clever catalogs that start arriving in time for holiday shopping — stuff that no one exactly needs but that a lot of people
would love to receive as a gift. 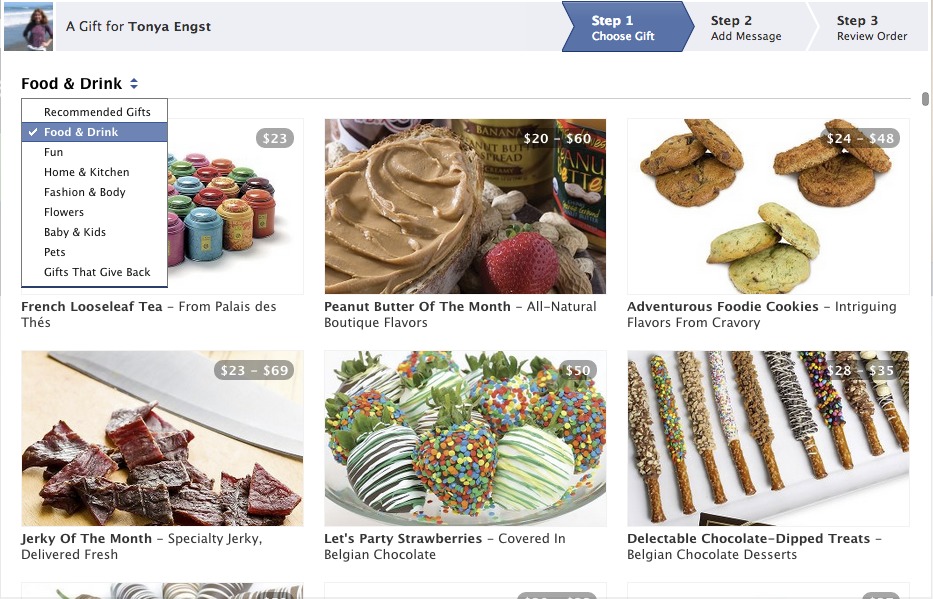 So what sets Facebook Gifts apart from standard catalog shopping? I get the impression there are more options to choose from than with most catalogs — that’s particularly true for the foods, many of which offer a variety of flavors. Plus, you can choose a “card,” some of which are from well-known stationers, and enter a custom message — it’s a somewhat better experience than a gift card in a random package. Besides this, there are two main differences. 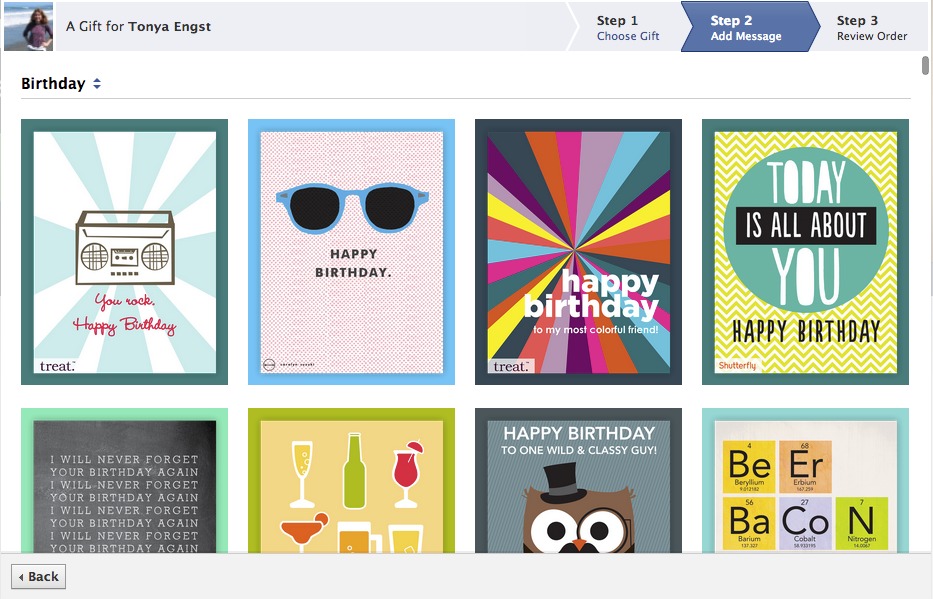 First, because this is Facebook, you can opt to have the fact that you’ve bought your friend a gift — but not what it is — appear on their timeline for all to see (aren’t you generous!). Second, when your friend gets the notification, which Facebook sends in email as well as via a public or private message on Facebook, she can opt to swap it for anything else in the gift program of equal or lesser value. That swap is entirely private — the giver has no idea that the gift has been swapped. If the gift isn’t picked up within
two weeks, the order is automatically cancelled. (It’s worth reading through Facebook’s help articles on Gifts before using it the first time, so you understand what you’re doing.) 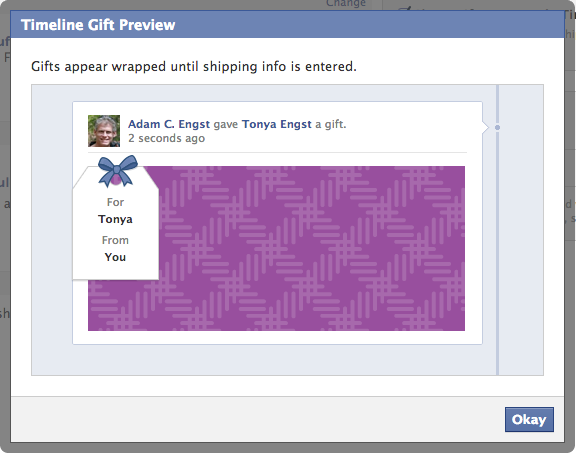 I haven’t received my gift in the mail yet, so I can’t comment on the delivery aspect of the program, but that’s a well-solved problem and is likely handled by the companies whose products are included in the program. It’s unknown what sort of a cut Facebook takes for facilitating the transaction, but I have to say, I personally approve of Facebook generating revenue in this fashion. The Gifts program provides a true service for Facebook users and fits perfectly within the social networking aspects of the
site, in contrast to Facebook’s ads.

Facebook Gifts is available only in the United States at the moment, and is being rolled out over time, so it may not appear for you just yet. In theory, a new Gift icon should appear when you visit a friend’s timeline; you can also start from the main Facebook Gifts page. And, if someone gives you a gift, Facebook will immediately enable your account to give gifts to others as well.