I have been drawing cartoons most of my life, and in that time I have proven conclusively that the saying “practice makes perfect” is a lie: decades of practice have done little to improve my drawing abilities. As my friends with whom I have shared my artistic endeavors can attest, my cartoons, while occasionally funny (so they tell me), are seldom technically competent, let alone beautiful. Nonetheless, I have persisted with my cartooning habit because it is enjoyable and a change from the kind of thinking that I do in my day job.

However, I probably would have given the habit up long ago were it not for the modern miracles of drawing software and graphics tablets — they have made it possible for me to draw well enough that my cartoons don’t require industrial strength eye-bleach after viewing. Over the years, though my physical drawing skills have not improved, my cartoons have become more ambitious and technically sophisticated as I migrated from one drawing application to another and from one graphics tablet to another. By the middle of 2011, my cartooning toolset consisted of Photoshop CS1 and a great big Wacom Intuos 2 tablet: even though both the software and the hardware had been superseded by even newer, more powerful, versions, what I had was more
than enough for my primitive needs. With them I could produce cartoons that would not produce an immediate emetic reaction in the viewer.

Then I moved from Mac OS X 10.6 Snow Leopard to 10.7 Lion and from my old sit-down desk to a standing desk, and my cartooning came to a halt: my copy of Photoshop CS was a PowerPC application, which kind of application, as we all know, is incompatible with the last two versions of Mac OS X, and by the time I leaped to Lion there wasn’t an upgrade path from Photoshop CS1 to a later Intel-compatible version. Furthermore, my standing desk lacked the physical space to accommodate my massive Intuos tablet.

Of course, I didn’t require the full panoply of Photoshop capabilities for my cartooning efforts — a low-cost graphics app like Acorn or Pixelmator could easily provide the functionality I needed. However, the impracticality of using my tablet with the standing desk I’d purchased was a much less tractable problem. (Yes, I should have considered my drawing habit when I purchased the desk… but I didn’t.)

So, as a result, the world had been spared since that time from being subjected to new examples of my artless craft.

That is, until a friend of mine offered to buy me an iPad stylus for my birthday.

The Graphic Needs of a Bad Cartoonist — As I mentioned, the features I need in a graphics app in order to produce my cartoons are few and easily met.

I need layers. I don’t need a huge number of them, but I do need a few. I typically use one or two for the sketch itself, a couple more for coloring, and maybe one or two for tracing purposes — that’s right, my drafting skills are so undeveloped that I occasionally stick a photo onto a layer and then, on a separate layer, draw a sketch based upon the photo. It doesn’t necessarily have to be a direct copy: just something that I can use as a guide. (To paraphrase what Pablo Picasso may or may not have said, good artists copy, great artists steal, and bad cartoonists trace.) 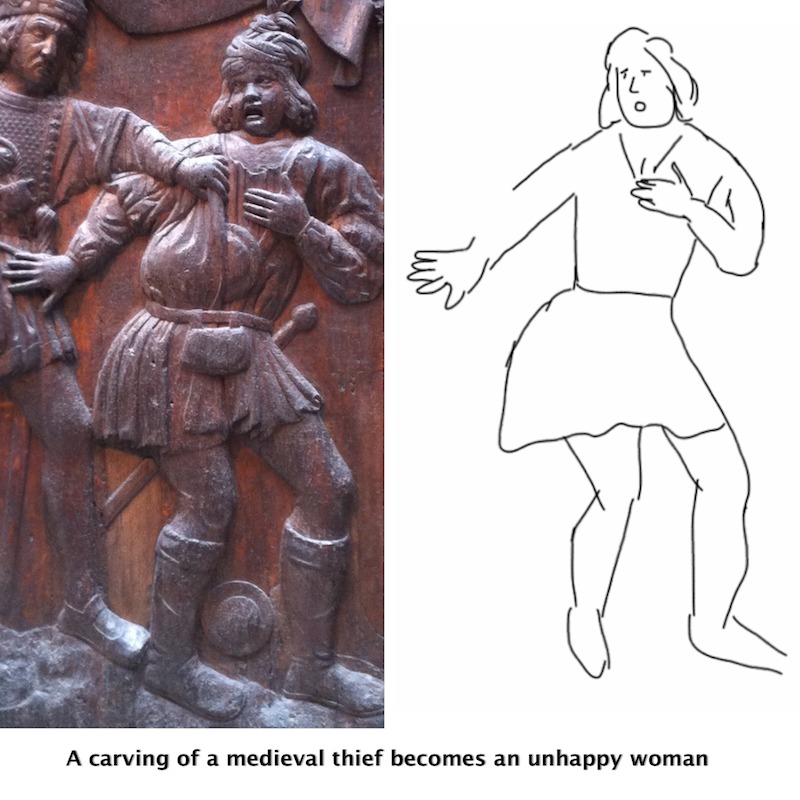 I need brushes. I don’t need a lot of them, just a few, with control over diameter and softness.

I need control over opacity, both for coloring and for layers.

And, of course, I need multiple levels of undo. (What part of “bad cartoonist” didn’t you understand?)

When it comes to a drawing tablet, I simply need a reasonably comfortable stylus of some sort and a reasonably sized drawing area: something about the size of a steno pad will do. Although pressure sensitivity would be nice, it’s not essential: my manual dexterity is not so well-developed that I can truly exploit such a feature anyway.

What I Tried — Before the idea of getting a stylus for my iPad emerged, I had tried a number of drawing apps for the iPad. Some were free, some were cheap, but none of them really captured my interest. For example, Paper, a fine drawing app with lots of sophisticated paint features and a large number of enthusiastic users, failed to meet my need for layers. Although a real artist can easily produce stunning compositions with it, for someone lacking fine motor skills and the rudiments of artistic ability (that is, me), it is tantalizingly frustrating. Most other drawing apps I tried were similar: suitable for someone with real
skill, but almost useless for someone with my lack of expertise.

In addition, I just can’t draw with my fingertips: even in kindergarten, my finger paintings were the ones that were hung low-down on the wall, behind the hamster cage, where they wouldn’t easily be seen and could be nibbled.

Choosing a stylus was easy: my friend sent me a list of comparably priced styli with links to reviews, and I chose the one that had a consensus of good ones: the $29.95 Wacom Bamboo Stylus Solo. It doesn’t have a lot of features, but it is a good general purpose stylus, and, given that I wasn’t quite sure to what uses I would end up putting it, “general purpose” was exactly what I wanted.

On the other hand, Wacom’s Bamboo Paper app suffered from the same drawback as the other drawing apps I tried: it had a feature set that a skilled artist could exploit, but lacked the bad-artist-friendly features that I needed (again, layers was a big omission).

Then I came upon Autodesk’s SketchBook Pro app.

The SketchBook app — SketchBook Pro turned out to have the features that I needed. It has multiple brushes and powerful controls to adjust them, it has a color picker that I can use easily, it has multiple undos and redos, and it has layers with opacity controls. The app’s gestural controls are part of what sold me: a three-finger swipe to the left is an undo, a three-finger swipe to the right is a redo, three fingers swiped down elicits the color picker and brush controls, three fingers swiped up calls up the layers palette. Zooming is a breeze, too, since it uses the standard iPad pinch gestures — and you can zoom in very deeply with the app.

This particular capability is a real advantage for me, for several reasons. First, it makes it much easier for me to do detailed cleanup of my various missteps. Second, it makes the stylus much more controllable. Let me explain what I mean: the Bamboo stylus (like many other styli I’ve seen) doesn’t have a fine point. It’s more like a small finger, meaning that it is difficult to see exactly where the point of contact is on the iPad screen. When I use a fine-point brush and I want to extend a line or place a small dot of color (say, the pupil in a cartoon character’s eye), I can’t easily tell where the brush will actually draw. However, I can zoom far enough in so that the brush’s fine point is no longer quite so fine at the
scale I have chosen, making positioning of the brush point far easier for me.

And the app has another convenient feature: a hand guard. This tool is a round transparent disc that you can slide around the screen to protect the image under it from accidental touches. This means I can rest my hand on one part of the image without its touch registering, just like I can rest my hand on a physical drawing pad or like I could on my Intuos tablet. Being able to rest my hand on the drawing as I hold the stylus means that I have much better control of the stylus. Finally, SketchBook has the capability to save sketches to various places like iTunes, Dropbox, or iCloud, in either flattened versions or in Photoshop-compatible layers, so I can bring the drawing into another program, like Comic Life for adding captions, or Pixelmator on my Mac for additional final manipulations. 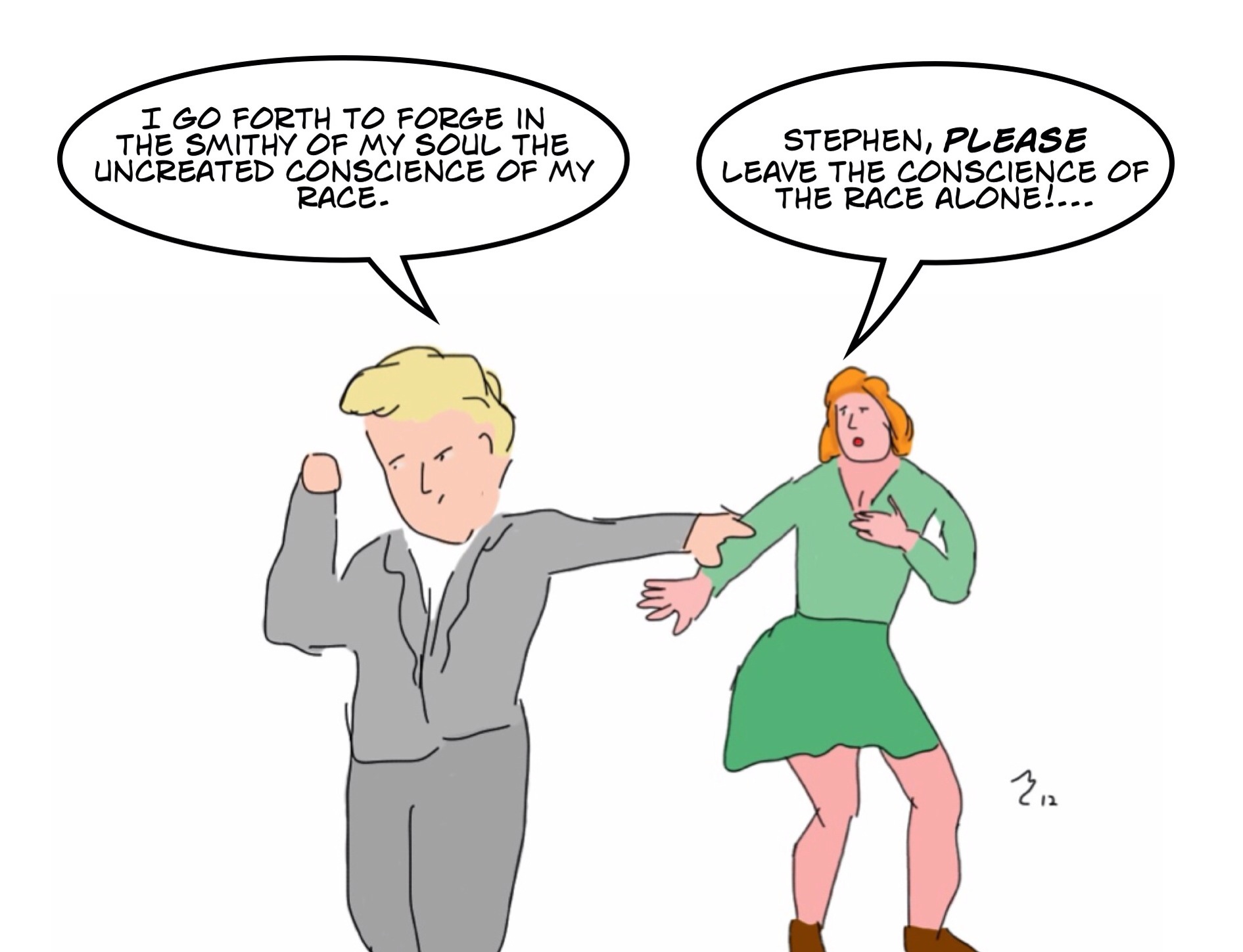 Bad Cartoons are Alive and Well — Even though I have long known that the iPad has drawing apps galore, I really have no excuse for not having tried to migrate my bad cartooning habit to my iPad sooner, other than that I was so focused on my old workflow on my Mac that adopting a different workflow on a different device never occurred to me. It should have.

My experience certainly makes this clear: if the Bamboo stylus and SketchBook app can help a bad cartoonist like me create credible drawings, I have no doubt that, in the hands of artists with actual talent and drawing ability (such as, perhaps, you, dear reader), they can lead to the creation of stunning works of grace and beauty on Apple’s tablet. But whether or not I ever manage to ascend to those heights (and the smart money is on “not”), I am delighted for now to be able to draw just as easily, and just as badly, on my iPad as I ever did with my big-screen iMac and giant Wacom tablet.

You have been warned. Get the eye-bleach ready.

Comments About iPad Tools for Bad Cartoonists (and Good Ones, Too)