After missing its promised October ship date and nearly missing the revised promise of a November ship date, Apple has finally released iTunes 11 with a redesigned interface that attempts to get rid of the clutter that had bogged down previous versions. In addition to its streamlined good looks, iTunes 11 also introduces the Up Next song queuing feature, unified search across all your media, and the capability to stream previous purchases from iCloud (without requiring a $24.99 subscription to the iTunes Match service).

Stripped-Down Interface (That Can Dial Back to 10) — On its initial launch, iTunes 11 looks quite spare in comparison to the busy user interface of version 10.7. Reminiscent of the iOS Music app on the iPad, you’re greeted with an edge-to-edge grid display of album covers from your music library along with the familiar playback controls in the top left corner, a display of what’s playing in the center, and a search field in the top right. 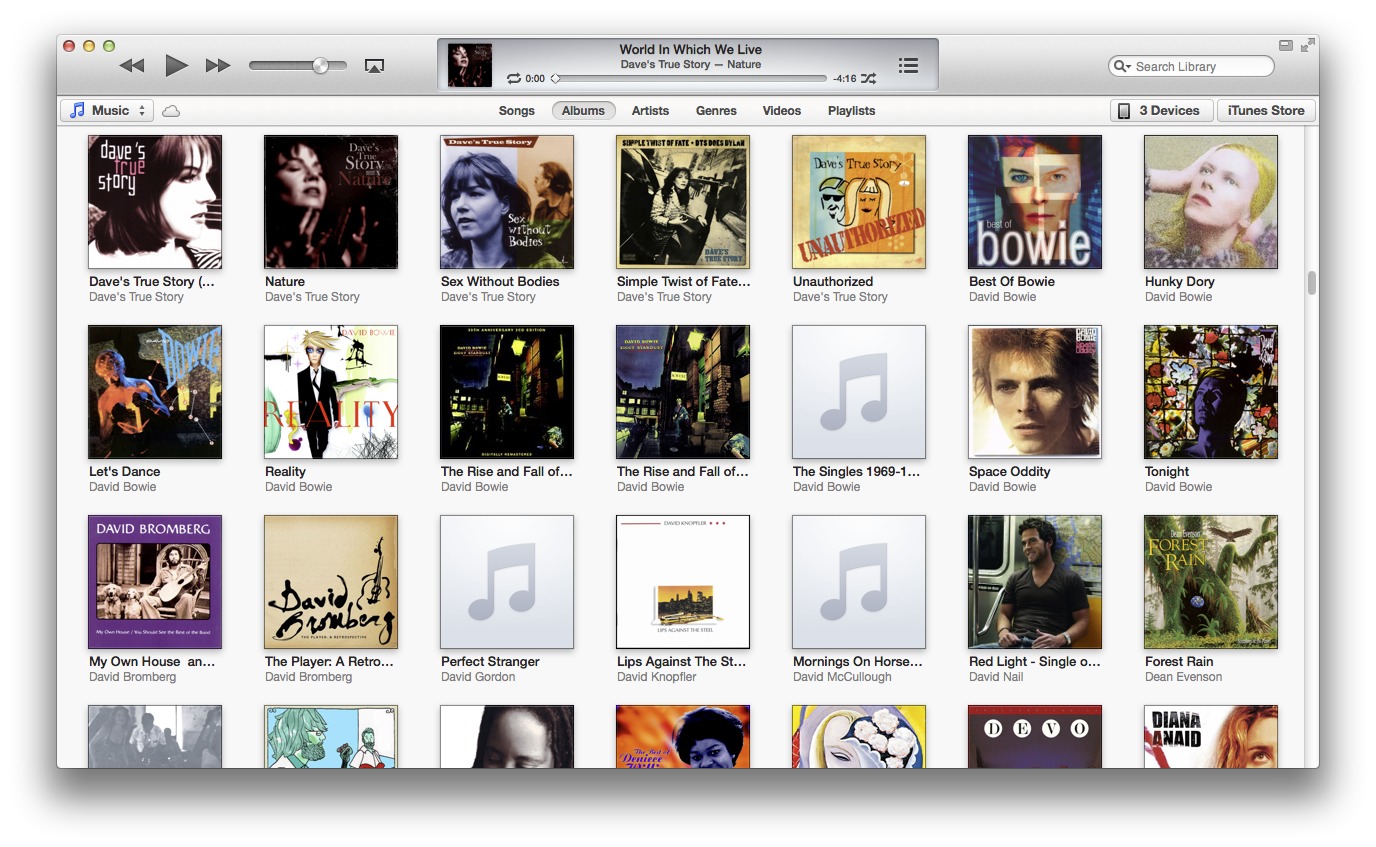 Rounding up several view elements that were previously sprinkled hither and thither, iTunes 11 consolidates its music view options in the bar directly under the toolbar, adding Videos, Radio, and Playlists to the standard Songs, Albums, Artists, and Genres (iTunes 11 drops the Composers and Cover Flow views). Switch among different media types such as movies, as well as shared iTunes libraries on your network, using the pop-up menu below the playback controls. Click the buttons on the right side to access available iOS
devices and the iTunes Store.

Single-clicking an album displays an expanded view of the album’s individual songs below the thumbnail, tastefully rendering this view using the primary hue of the cover as the background color as well as using secondary colors for text. Similarly, clicking the thumbnail in Movies displays the title’s details (such as cast, genre, and running time), while a TV Show expanded view displays a list of episodes. (If you double-click a thumbnail, iTunes starts playing the first song of an album, the first episode of a TV show, or
the movie.) 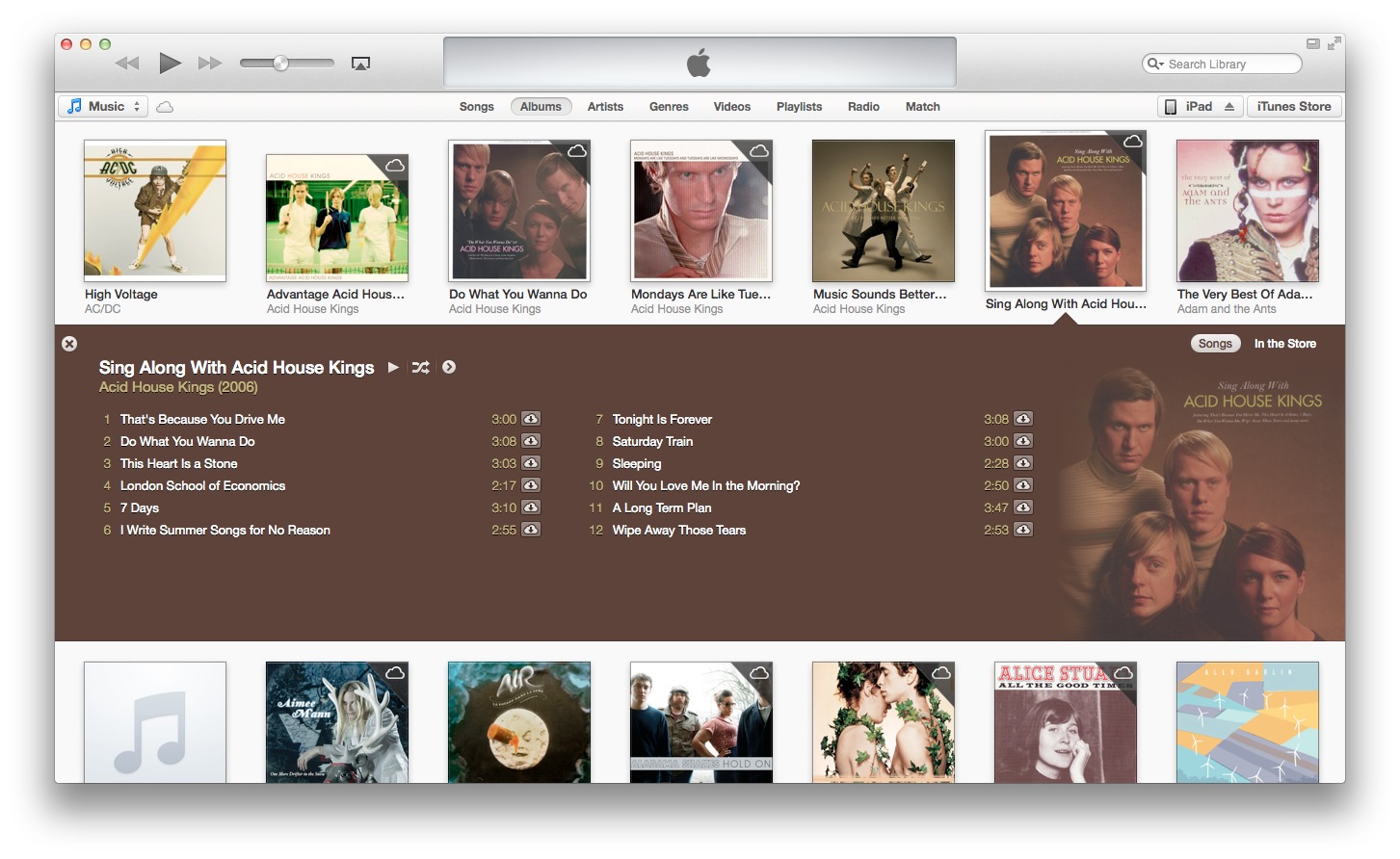 If the rejiggered interface of iTunes 11 feels like a push over the cliff, you can bring back many of the interface elements of iTunes 10 without much hassle. Head to the View menu to choose Show Sidebar (Command-Option-S) to bring back the familiar view of media libraries, connected iOS devices, shared libraries, and playlists. Additionally, choosing Show Status Bar (Command-/) displays a selected file’s size and play time at the bottom of the iTunes window.

One under-the-hood change to the interface takes place in the search field, which now features unified searching across all your media types — music, movies, and TV shows, as well as apps, podcasts, and books. In iTunes 10, you could search only within the contents of a selected media type (such as music). If you want to return to that more-focused method of searching, click the search field’s magnifying glass menu and then deselect Search Entire Library. Your searches then return queries pulled from just the media type you are currently viewing.

Up Next Feature and Revamped MiniPlayer — Exclusive to music playback, the new Up Next feature enables you to view the songs that are slated to be played next. To view upcoming tracks, click the three-line Up Next icon at the right of the “now playing” area to view a popover showing a list of tracks (or press Command-Option-U). What appears in the Up Next popover depends on where you start playing music. If you start playing a song within the Albums view, you’ll see just the remaining tracks from that specific album. However, if you start playing a song in either the Songs or Playlists view and then check what’s Up Next, you’ll see a list of the next 20 songs
listed in the current sort order.

The magic of the Up Next feature is the capability to add tracks to the play queue on the fly. To do so, click the circular arrow icon next to a song (either in Songs view or in the expanded area underneath a thumbnail in Albums view) to bring up a popover. Clicking Add to Up Next places the song ahead of the previous play order, and any additional songs added to Up Next are subsequently placed in the order that they were selected. If you want to ensure a song is played directly after the current song ends, click Play Next in the popover and that song floats to the top of the Up Next list. This trick also works within the Up Next popover to shift songs to the top. At the top of the Up Next popover, you can clear the entire list or go
back to previously played songs by clicking the clock icon. 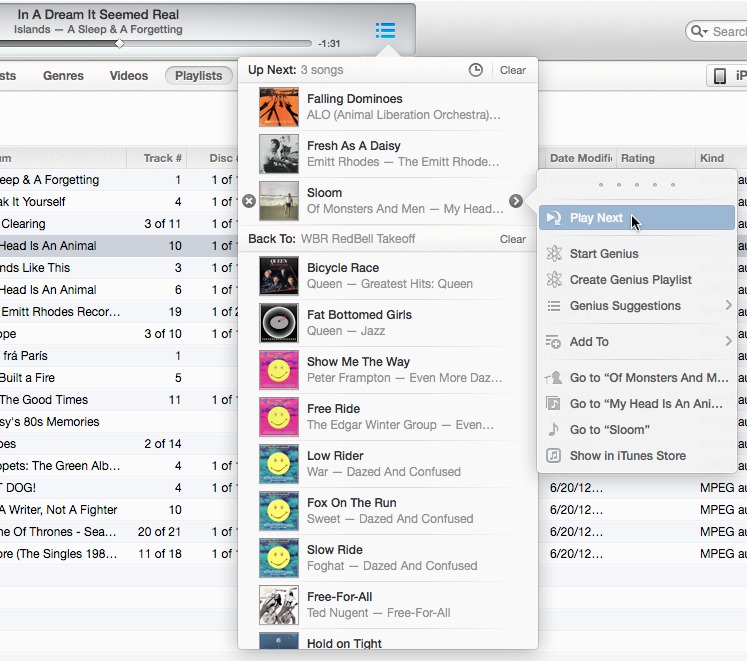 The iCloud Streameth — As you explore your media library, you may notice that it has been bulked up with albums, movies, and TV shows that you don’t actually have stored on your Mac’s hard drive. This is because iTunes displays all purchases you’ve made from iTunes (from the account that you’re currently signed into) and enables you to stream them from iCloud. To determine which music, movie, and TV show files are stored in iCloud, look for a cloud icon in the top right corner of a thumbnail.

You can stream songs without having to download them first, enabling an iTunes Match-like functionality that’s limited to media purchased from the iTunes Store. It’s mostly useful for avoiding storing files locally, which is handy for those with Macs with limited space, such as a MacBook Air with only 64 GB of flash storage. To preserve a local copy of an album or song on your hard drive, click the iCloud icon (on the album thumbnail or next to a song) to download it. Additionally, you can use the Up Next feature just as
easily with streamed tracks as you can with local music files (but you’ll need an Internet connection for this to work).

Note that if you stop watching a video file that’s streaming, the digital bits continue to download in the background (you’ll be able to see the progress of the download in the “now playing” area). It seems the only way to stop the stream from downloading is to start playing another item from iCloud (whether it be a song or another video).

Finally, if you don’t care to see your iCloud music purchases mingled with the files residing on your hard drive, you can turn off this option by selecting Hide Music in the Cloud in the View menu. To hide videos as well, switch to Movies and TV Shows and choose Hide from the View menu for each of those media libraries.

All about iTunes 11 Entertainment Mac & macOS