BBEdit may be a hoary old beast, but you wouldn’t know it to look at the just-released version 10.5, a free update for owners of BBEdit 10. Bare Bones Software regularly gives its flagship program youth treatments that slough off the crufty parts and invigorate the program with new life. In the latest release, those treatments include automatic versioning, integration of Web site management into its Projects feature, and a new Go menu. There’s also a long list of minor improvements, and an even longer list of bug fixes.

BBEdit 10.5, also refreshed to look crisp on Retina displays, simplifies. The toolbar now takes up less vertical space and has fewer discrete icons on it (bye bye, pencil), but maintains the same functionality. Plus, controls have been shuffled and combined to remove redundancy in menus and dialogs. For instance, Convert to ASCII is now part of Zap Gremlins. (Pew! Pew! Got ’em!)

This release ties into the Versions feature of Mac OS X 10.7 Lion and 10.8 Mountain Lion without borrowing Apple’s interface. As you would expect, all files saved locally have each subsequent save recorded as a new version. But to access these versions, BBEdit 10.5 provides a new Search > Compare Against Previous Versions menu item to select a version by date and time, and then manage a comparison using BBEdit’s familiar difference engine. The date and time of the most recent document version are shown in the status bar, along with a lock icon that may be toggled to protect against changes. If you don’t want anything to do with Apple’s Versions, you can turn the feature off using a supplied command in Terminal. 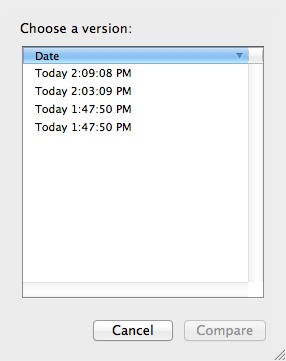 This is a nice addition to BBEdit’s long-time support for version-control systems like Subversion (SVN) and Perforce (P4). While Apple’s Versions isn’t nearly as powerful as such developer-focused systems, the automatic commit on each save will prevent a lot of heartache as a no-effort recourse to older renditions of files you’re working on. BBEdit has always done a great job in “journaling,” or keeping a per-keystroke record of file changes that are recovered automatically in the event of a program or
system crash or power outage, and this new feature fits right in. (While on the topic of version-control systems, BBEdit 10.5 drops support for the elderly CVS system that launched in the mid-1980s and has largely been supplanted by Subversion, Perforce, and git, the last of which BBEdit does not yet support.)

Managing the many files associated with a Web site in previous versions of BBEdit required using a separate palette and then linking folders in the Finder. I found it usable, but awkward to set up and manage changes, and apparently so did Bare Bones. In BBEdit 10.5, the Sites palette is gone, and site features appear directly in Project windows.

BBEdit’s Project feature already lets you reference local folders and files as well as ones stored remotely (using FTP and SFTP). It’s a natural way, too, to organize Web site parameters (like login identity and file paths), which are found by clicking a rain-cloud icon. (We have a query out as to why it’s a rain cloud.) The Sites dialog also includes automated pre-flight features to check syntax and other factors before uploading. Previously, BBEdit’s pre-flight features were split up and required manual selection. 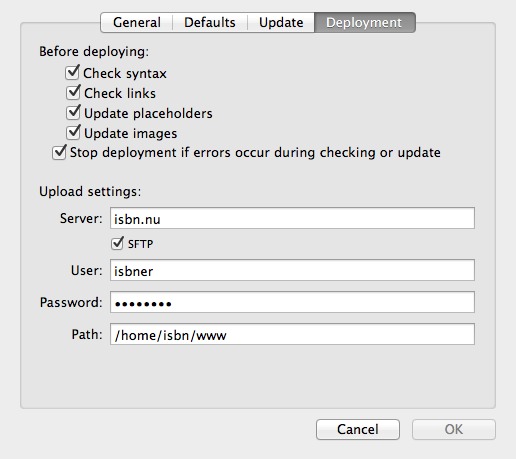 The Go menu should be a hit with anyone writing code, including JavaScript. It consolidates and expands navigation options to help you find your way through code functions, line numbers, and “jump points” that you can mark in a file. A Go > Named Symbol menu item shows every kind of element BBEdit can identify in a file, such as functions and global variables. 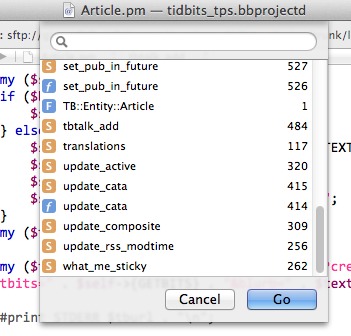 Some users may find a new addition to preview windows useful as well. BBEdit already let you create CSS and HTML templates to apply against documents and create a preview as they would appear on a Web site. Now, you can pass a BBEdit file through an AppleScript script, binary executable, or shell script before it’s shown in the preview window. For TidBITS, I could imagine connecting a database and template component with our back-end systems that would enable BBEdit to preview an article as it would appear
on the TidBITS site in a way that was previously impossible without staging the article.

The one problem introduced in this release is that the file list in the left-hand side of a Project window cannot be scrolled by using a mouse with the scrollbar (either by clicking or grabbing the thumb). Instead, you must use a scroll-wheel on a mouse. The company’s tech support says the problem is known and will be fixed in a maintenance release, and I’ve confirmed this is so by testing a beta release with the fix in place.

Although those are the highlights, there is much more in this update, including fixes for Fortran formatting bugs. The full list of release notes is, as always, a good read, especially for long-time users. Note that the change from a pencil to a lock icon involved a potential homicide — averted for now. Whew!