Bundled apps. There’s no question that some are essential, whether we’re talking Mac OS X or iOS. Safari? Sure. Mail? No problem. But while most of the less useful apps that Apple bundles into Mac OS X are out of sight, out of mind in the Utilities folder (when was the last time you used, or even noticed, Grapher or Audio MIDI Setup?), it’s harder to avoid the iPhone’s crufty default apps. They might have been worthwhile — or at least novel — when the original iPhone shipped, but now they sit firmly unused on many iPhones, taking up valuable space. I can’t help you delete these apps (it’s impossible, so just toss them in a folder labeled “Barnacles” and squirrel it away on your last home screen page), but I can make
some recommendations for how to put them to use or replace them with something that’s more useful. 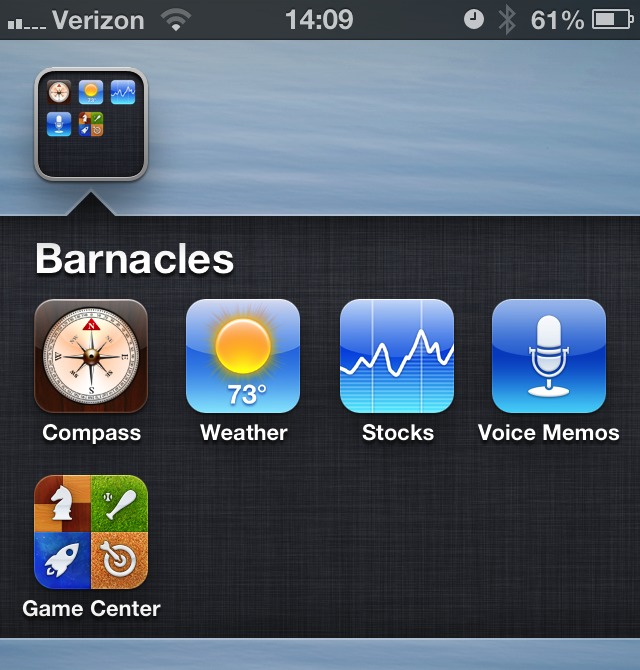 Compass — When it first appeared with the iPhone 3GS, Compass was a neat proof-of-concept for the iPhone’s then-new sensors, but most of us have as much use for a compass as we do for a sextant. If you just need to know which way is north, Maps has a built-in compass: just tap the arrow in the lower-left corner twice.

Make it useful: If you’re a cord cutter, you may have a niche use for the Compass app: aligning a television antenna. Using the data from AntennaWeb and the degree readings from the app, you can easily optimize your TV reception without shelling out for a real compass. Just don’t drop your iPhone off the roof. 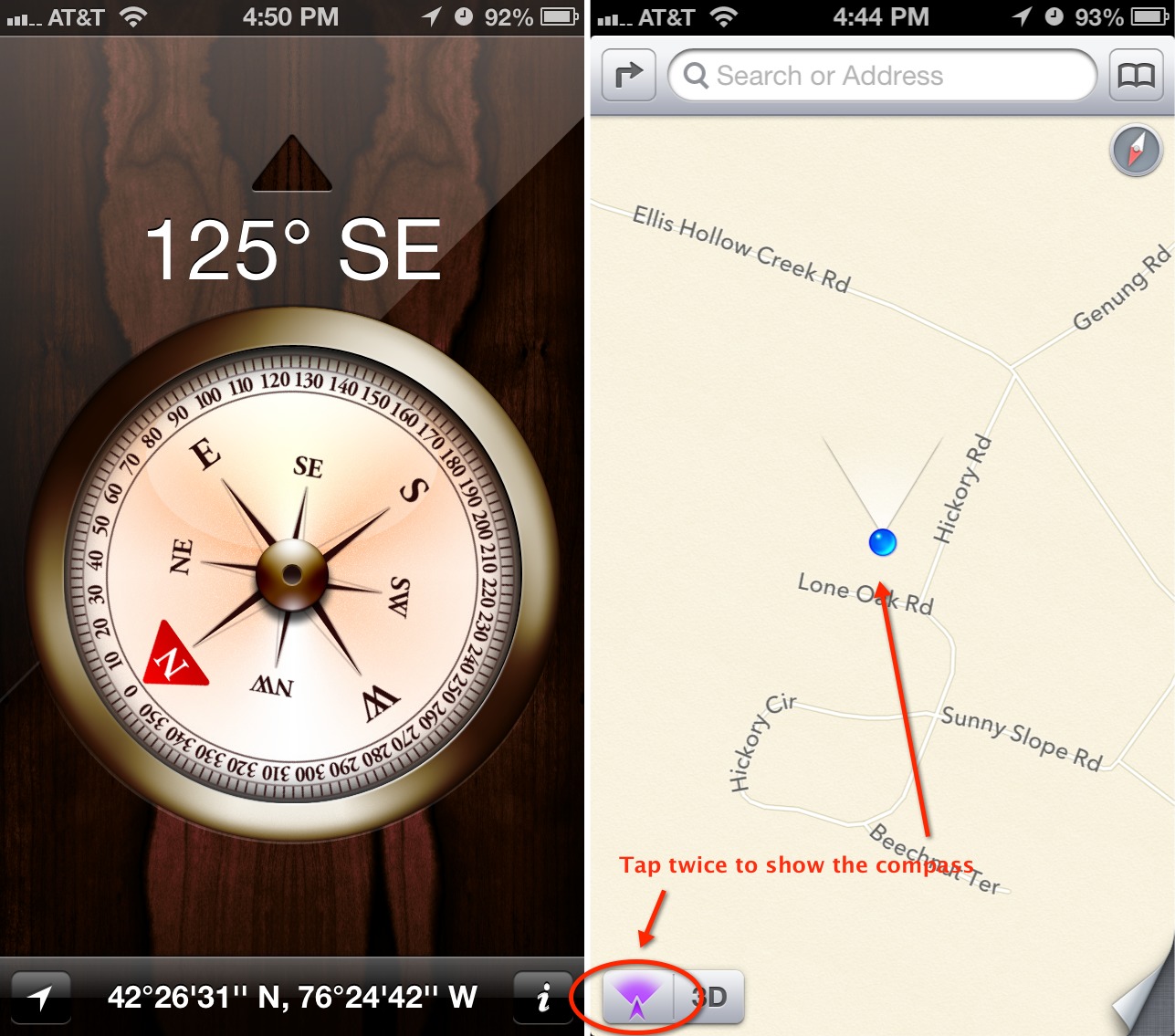 Weather — Although Weather is a simple, competent app, almost all of its functionality has been supplanted by the Weather widget introduced with Notification Center in iOS 5. For casual users, the widget tells them everything they need to know: current temperature and a five-day forecast. And for anyone who is more involved with the weather — outdoor athletes, students walking among classes, farmers, and construction workers, to name a few — Weather is cold, dreary, and unsatisfying.

Replace it with: Although there are oodles of weather apps for iOS, and Adam Engst is fond of WeatherBug (see “WeatherBug Elite 1.0,” 4 March 2010), let me recommend the $1.99 Check the Weather. It’s everything you could want in a weather app. Its design is simple and gorgeous, with a terrific use of typefaces like Idlewild, Futura, Helvetica,
and Avenir Next. Rather than screen-hungry toolbar buttons, Check the Weather relies on gestures: swipe right for an hourly forecast, swipe left for a 12-day forecast, and swipe up for a short-term precipitation forecast powered by the also-amazing Dark Sky. 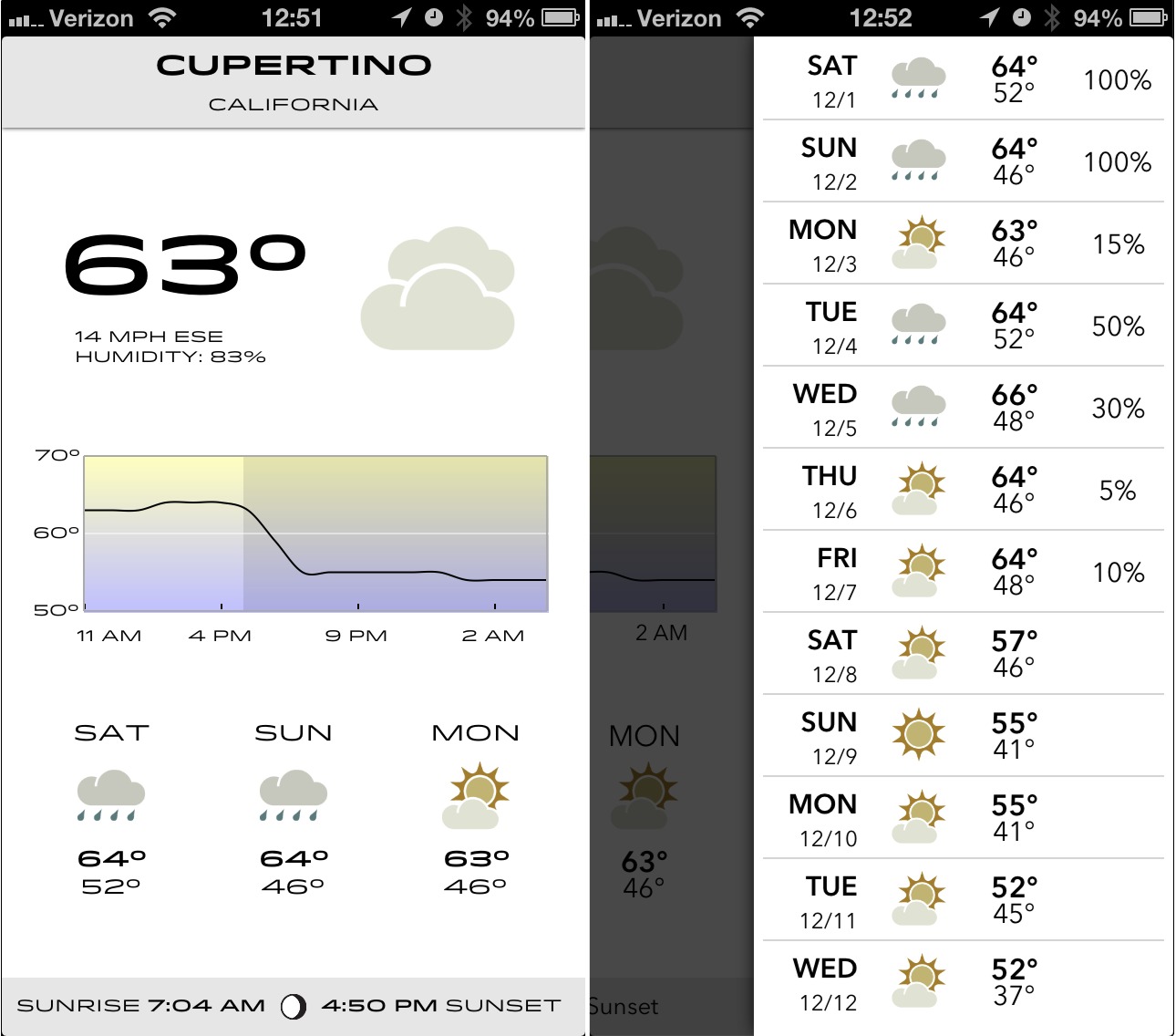 Stocks — Like Weather, Stocks is a holdover from the launch of the original iPhone. It too is simple and competent, yet horribly outdated (what would the default stocks be today?). And while nearly everyone outside of Southern California wants to know about the weather, far fewer people want to keep close watch on their stocks. Stocks pleases no one. Traders and those with significant portfolios will want something more robust, while the vast majority of iPhone users — who likely don’t own or watch any individual equities — will bury Stocks in a folder, never to be seen again. And the Stocks widget is more annoying than useful. Unlike everything else in
Notification Center, it’s constantly ticking off stock prices, which is distracting when you just want to check the weather or see your latest messages. If you’re a serious trader, you’d be better off with something that actually notifies you of market changes.

Replace it with: Most investors are invested in mutual funds inside a 401K or IRA. If that’s you, then you’re probably best served by your financial institution’s official app. It’s probably free, more useful than Stocks, and will let you make trades and adjustments. However, if you want to keep a closer watch on your stock portfolio, the $1.99 StockWatch is an easy investment. It offers detailed statistics, push notifications, and can be locked with a
PIN. Additionally, it can update quotes once every 15 seconds, and can even calculate commission fees. There’s an ad-supported free version without push notifications if you’d like to try it out. 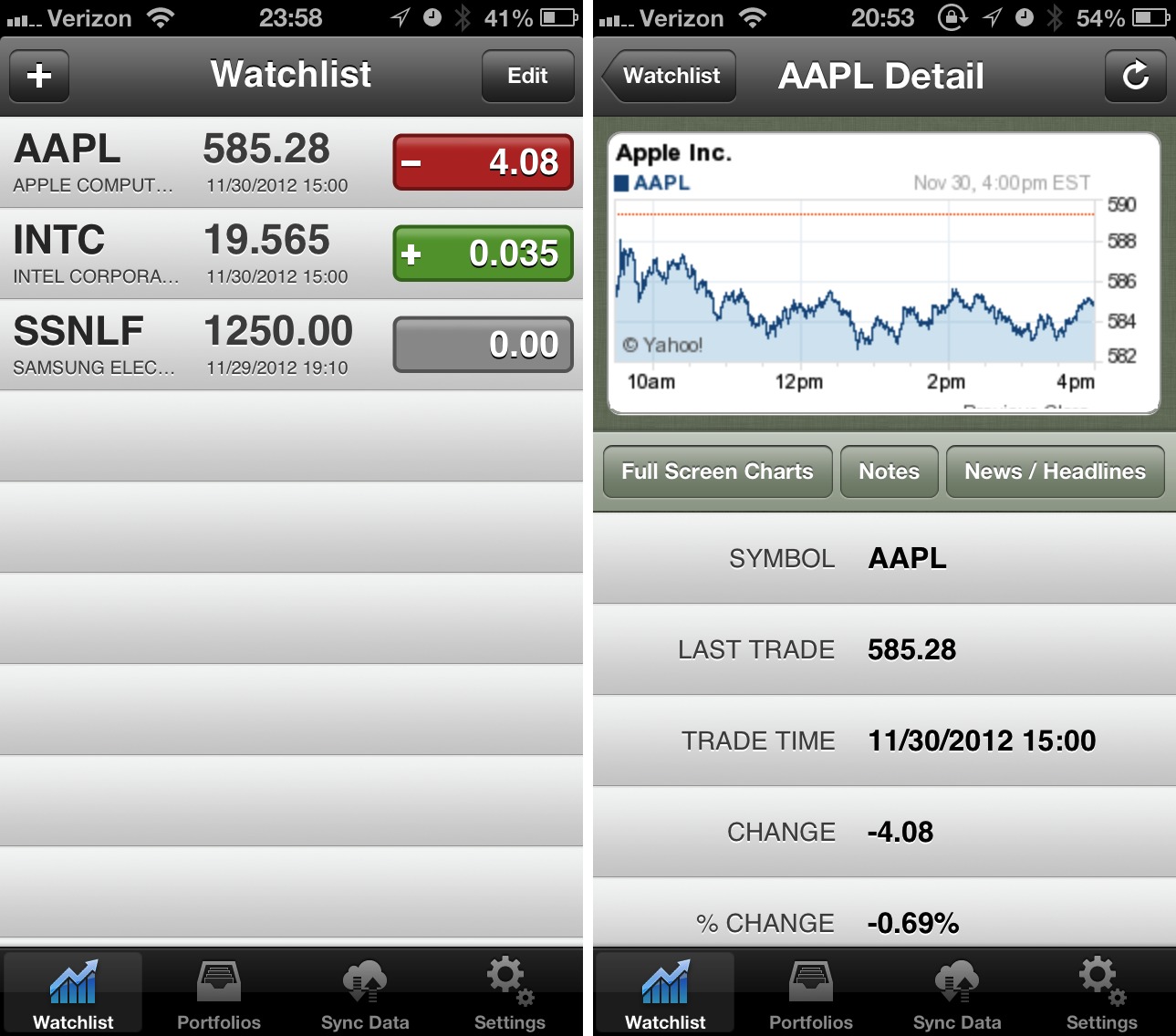 Voice Memos — When you need to record a voice memo, Apple’s Voice Memos app will do the job. It’s even one of Apple’s better uses of skeuomorphic design (where the app looks like a real-world object). The problem is, when was the last time you had to take a voice memo? If you had to record something, would you even remember that Voice Memos is standard on every iPhone, or where you buried it when you last cleaned up your home screen? You could dedicate a spot on your home screen for it, but, let’s be honest, you don’t want to take up valuable real estate with something you might use once a year. Worse, if you’re the type who would use it frequently, Voice
Memos will frustrate you. Memos are easy to record, but hard to move. You only have three options to export notes: email, text message, or iTunes sync. If the recording is too big, your only option is iTunes. 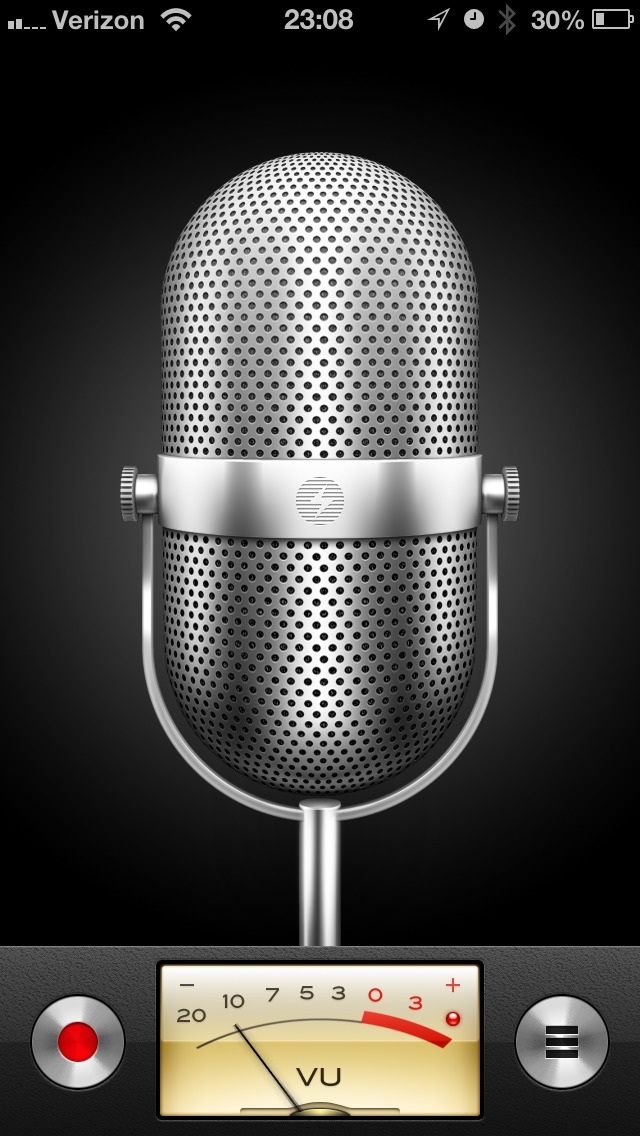 Replace it with: For an option that provides voice memos and much more, consider the free Evernote. The cloud-based note service’s newly redesigned iOS app can capture not only voice, but text and photos as well. It even supports OCR for images, so you can snap a picture of a business card, then find it by searching for its contents later. You can access your notes near-instantaneously via Evernote’s Web site or the recently redesigned Mac app. With its slew of note-taking capabilities, you won’t mind keeping Evernote on your home screen. However, unless you shell out $44.95 per year for a paid account, you’re going to come up against some limitations. Until you pay, each note has a 25 MB limit, and you have a usage cap of 60 MB per month, which could go quickly if you take a lot of voice notes. 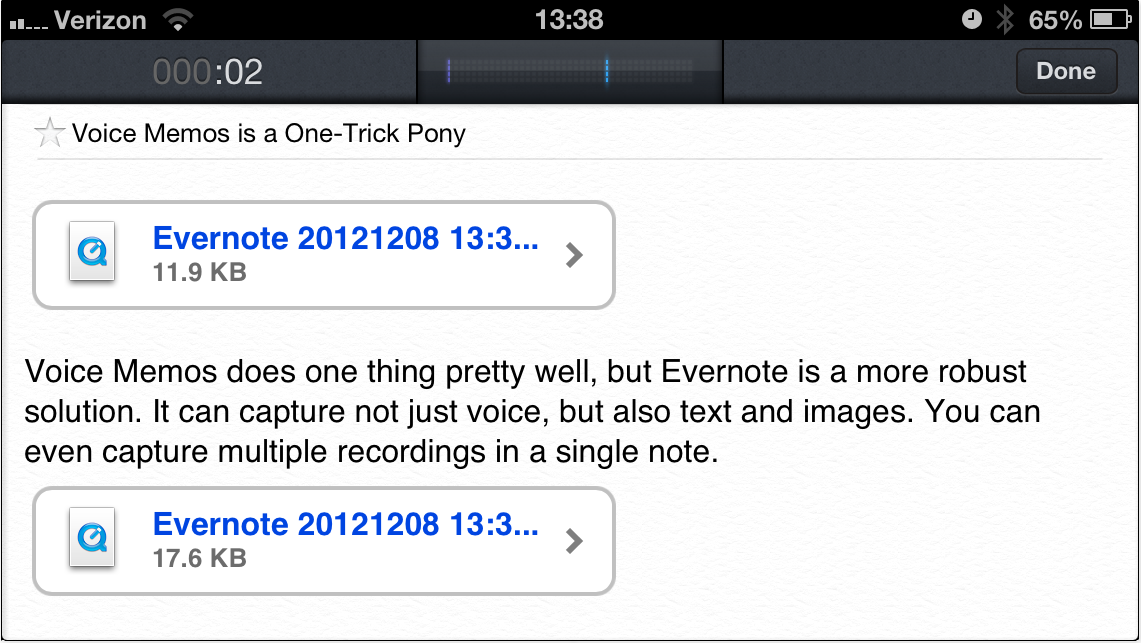 If you’re not comfortable with keeping your recordings in the cloud or are unhappy about Evernote’s cost, the $0.99 Audio Memos is a solid voice recorder with local Wi-Fi and USB syncing, plus a slew of advanced features available as in-app purchases (there’s also a free version, plus a $9.99 Pro version that includes all the features at once). On the other hand, if you’d just like an easier way to get recordings onto your Mac, the $1.99 DropVox is a dead-simple app that saves your recordings to Dropbox. You can even set it to record when the app launches, and it can record while the screen is locked. Unfortunately, it can only record, you’ll have to use the free Dropbox app to listen to your notes on the iPhone. 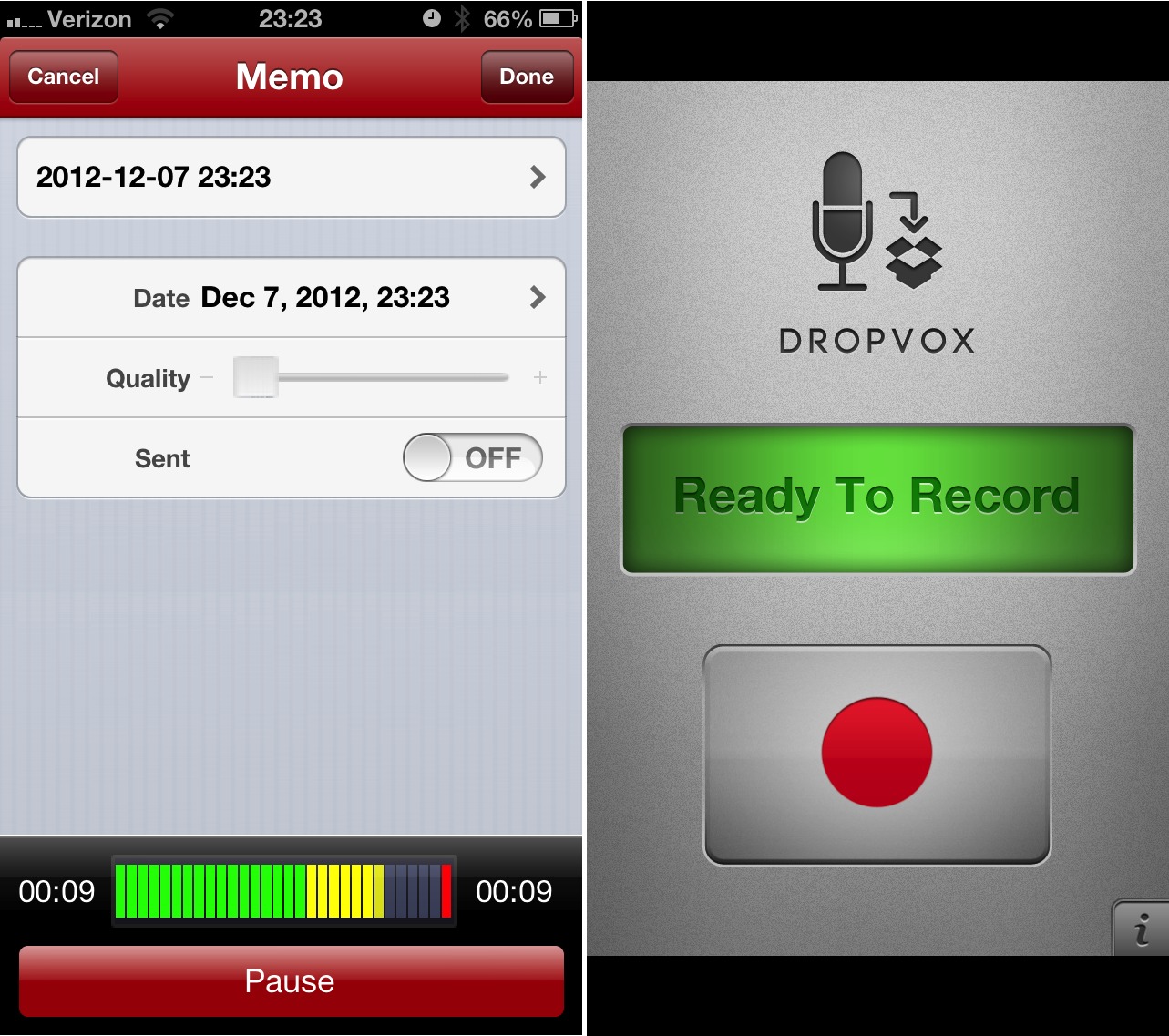 Game Center — Introduced with fanfare in iOS 4.1 (and joined by a Mac version in OS X 10.8 Mountain Lion), Game Center promised to bring an Xbox Live-style experience to iOS, with matchmaking, achievements, and leaderboards. In reality, it’s as much fun to use and code for as peeling potatoes with a spork. Developers have been slow to do much with Game Center outside of achievements. It doesn’t help that the app itself is a confusing mess of green felt (one of Apple’s worst uses of skeuomorphic design). The only reason I ever open it is to add friends, and I get back out as quickly as possible. Fortunately, for the handful of apps that use Game Center, all the
required bits are accessible inside the game. If they work.

How to make it useful: Install the free Letterpress, which is the best use of Game Center I’ve seen, using it for matchmaking and gameplay. In fact, Letterpress’s popularity seemed to take Apple by surprise, and Game Center has had frequent outages since Letterpress’s release. Fortunately, these issues have been mostly resolved since the release of Letterpress 1.1, which handles server errors better. Unfortunately, you’ll still have to launch Game Center to add friends. While the basic Letterpress app is free, you’re limited to two games at a time, and can use only the default red, white, and blue theme. Pay a mere $0.99 to play as many games as you want simultaneously
and to unlock another six color schemes. Even if you’re like me and don’t care for the other themes, $0.99 is a bargain for the hours of fun you’ll have playing the game. 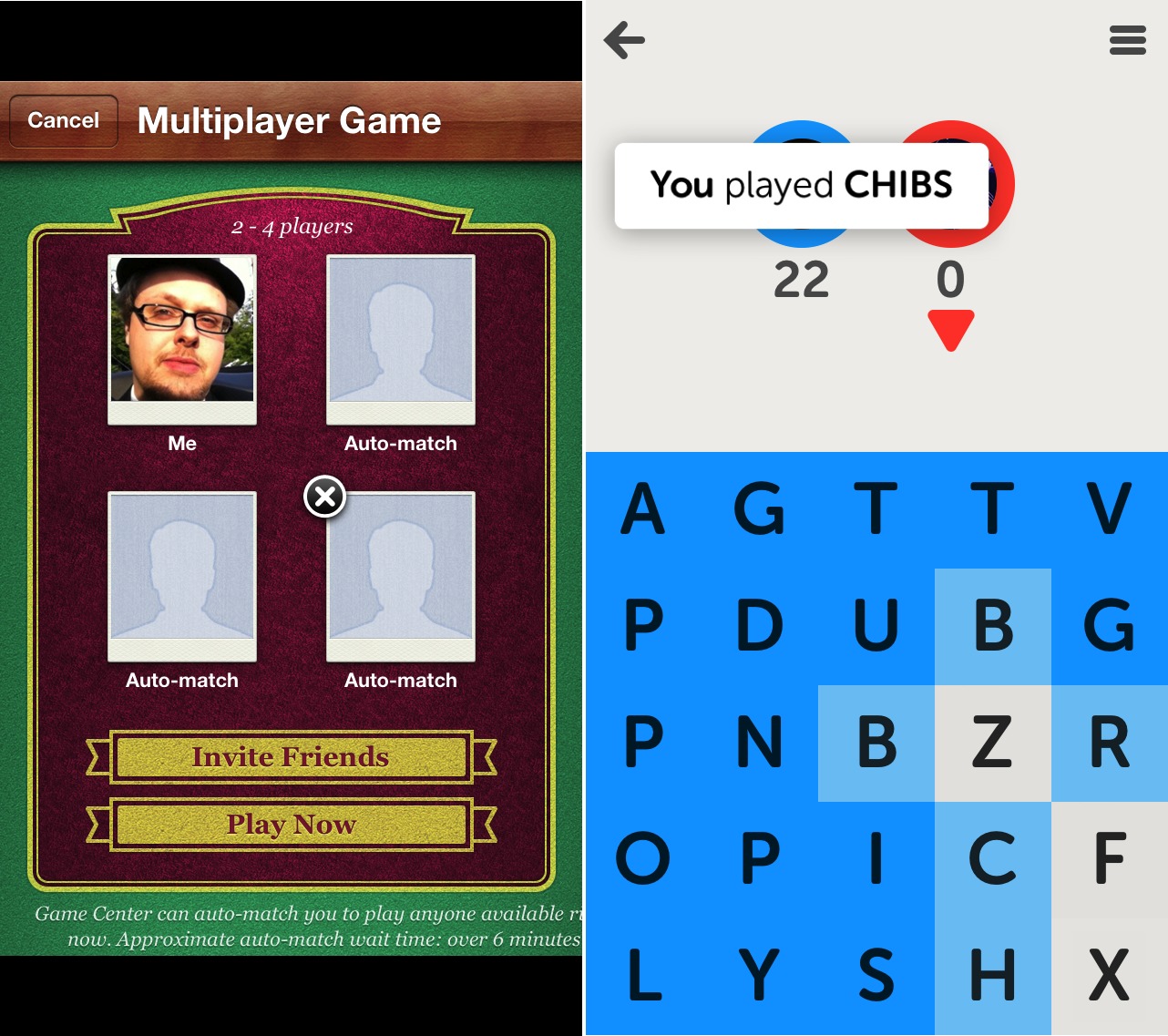 Of course, there’s nothing really wrong with any of these default apps — they won’t crash your iPhone or kick your dog — but they’re neither good examples of design nor particularly useful for many iPhone users. And you know what? We wouldn’t care, if only Apple didn’t treat them as special, and refuse to let us delete them. Sure, Settings, Phone, Safari, Mail, and so on need to be protected, but vastly fewer people would miss Compass, Weather, Stocks, Voice Memos, or Game Center, either from lack
of interest or thanks to a better replacement. Given the hundreds of millions of iPhone users, it’s inevitable that people will disagree with us, but do consider our suggested replacements, and if you have your own unused Apple apps (Newsstand, anyone?), let us know in the comments.

Comments About Five Apps Apple Could Delete from the iPhone