Back in the days before iTunes 11, the search box at the top right of the main iTunes window would search only the list at which you were looking. For example, if the search field in my iTunes window were set to search All metadata (a click of the magnifying glass let me set that) and I were to begin typing “fel,” iTunes would immediately filter the song list to show me only the songs that had those characters, in that order, somewhere in the song metadata: name, artist, composer, and so on. If I were to keep typing so the field contained “fell,” the list would continue to be filtered, showing, in my songs list, all the songs from Howard Shore’s “Fellowship of the Ring” soundtrack, “If I Fell” by the Beatles, and
“Fell in Love with a Girl” by the White Stripes. If I continued typing so the field contained “fell ring,” only songs from the Howard Shore album appeared.

The search could also start from anywhere within a word: if I were to type “ellow” I’d find the Howard Shore songs and others that had “ellow” in their metadata, like “Yellow Submarine.”

Three things were happening. First, the search was dynamic: each character entered into the field was immediately added to the search string and the results appeared (almost) immediately. Secondly, iTunes treated separate words as separate search terms with an implicit AND between them. Thus, typing “fell ring” meant “show me only the songs with both ‘fell’ AND ‘ring’ in their metadata.” Third, the search looked anywhere within the metadata text, not just starting on word boundaries.

In iTunes 11.0, however, a new capability was added to the search field: Search Entire Library. With that option chosen, as it is by default, not only was the currently displayed list searched but all the other collections in the library were as well. Of course, that meant the results couldn’t appear as a subset of the list shown in the main window, since that list doesn’t show the entire library’s contents. Instead, the results appeared in a popover below the search field. 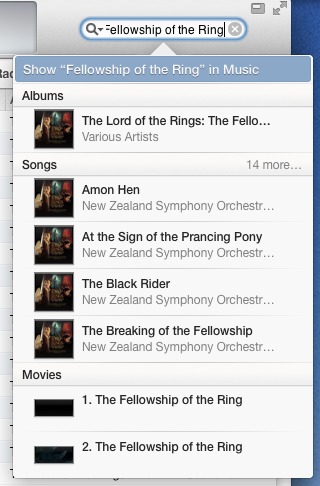 Hooray! What an advance! Except for one subtle difference in the initial release of iTunes 11 that was very confusing: in iTunes 11.0, an entire library search did not treat separate words as separate search terms with an implicit AND between them. Instead, it treated the contents of the field as a single matching string. Furthermore, that single matching string had to match starting from the beginning of a word.

What did that mean? Three things, in fact:

If I clicked that header button or pressed the Return key, iTunes filtered the currently displayed list just as it did in previous versions of iTunes: “fell ring” or “ellow ring” would both show me the songs from the Howard Shore album in my song list, if that’s where I was searching. 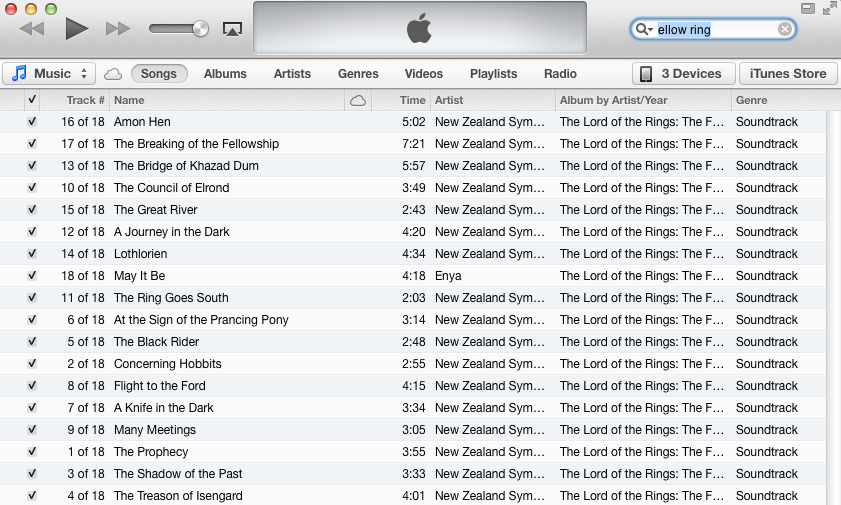 So, even though you could now search the entire library in iTunes 11, you couldn’t search it in the same way as you could individual lists, and the difference was subtle enough to baffle the average user.

This, of course, was madness. Fortunately, Apple’s iTunes engineers regained their searching sanity and (mostly) eliminated those two very different ways of searching with iTunes 11.0.1. Now, the entire library search recognizes parts of words and uses implicit ANDs just as the search in iTunes 10 and earlier did, and the popover presents the matches that you would expect to see. What is more, the very slow searches that those with large iTunes libraries experienced with the iTunes 11.0 entire library search now produce results much more quickly.

Only one distinction remains between the two methods of searching in iTunes 11.0.1: in a search of a single list, you can type any part of a word to find matches, so that, in my example, “ello ring” will find songs from the “Fellowship of the Ring” soundtrack. However, the entire library search in iTunes 11.0.1 still requires that partial words in a search must begin with the start of a word: “ello ring” still tells me there are no matches, but “fello ring” works as I expect.

Obviously, users shouldn’t have to know that searches have to start on a word boundary in one kind of search and not another. It should all just work. That still needs to be fixed, but iTunes 11.0.1 has done a lot to eliminate the confusion that entire library searches in iTunes 11 created.

All about iTunes 11 Problem Solving

Comments About iTunes 11.0.1 Fixes Most of the Hits and Misses in iTunes 11.0 Searching