Like a pair of sumo wrestlers, Apple and Google are facing off in the field of iOS mapping services. First Google held the upper hand, controlling the map database underlying Apple’s first Maps app. But in a bold move that was both expensive and ultimately somewhat embarrassing, Apple escaped Google’s clutches by creating a new Maps app and its own mapping infrastructure, relegating Google Maps to a Web browser window. Now Google has returned to the ring with a new Google Maps app that offers all the features that Apple said couldn’t be added to the original Maps app.

I doubt we’ll ever know exactly who was responsible for what in the breakdown of that relationship, but regardless, iOS users can now choose between Apple’s Maps app and Google Maps, along with the many other GPS navigation apps like Navigon, MotionX, Garmin StreetPilot, CoPilot, and TomTom. It’s these other companies I feel sorry for, since between Apple’s bundled Maps and the free
Google Maps, a commercial app will be a hard sell. The main advantages I see to a paid app (with Navigon being the one I’m most familiar with) are offline access to stored maps (both Apple’s Maps and Google Maps rely on a cellular data connection to retrieve maps and directions) and interface niceties like pausing a podcast instead of talking over it and offering a light-on-dark night mode.

Since Google Maps for iOS just appeared, it’s too early to tell if it will have any subtle issues in real-world navigating, though it’s hard to imagine that it would react differently from Google Maps in a Web browser or Android app. The data behind Google Maps may not be perfect, but Google has been refining it for years. Apple took a lot of early abuse for the quality of its mapping database, and most recently, police in Australia warned against using it after having to rescue six motorists who followed incorrect directions into a national park. (Amusingly, police later had to issue a similar warning about Google’s database.) Realistically, though, Maps has likely worked well for the vast majority of its uses, and Apple is constantly correcting user-reported mistakes like the Australian debacle and refining the data through monitoring, just as Google does.

Before we look at how Apple’s Maps and Google Maps compare visually, there are some notable differences. 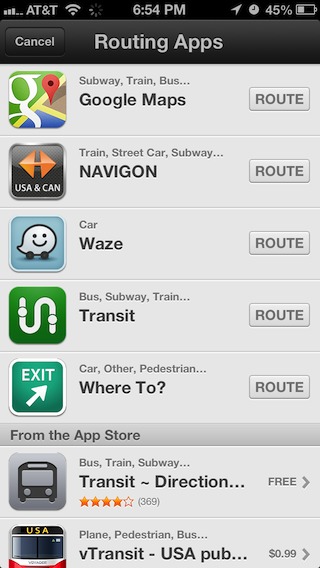 Let’s take a look at how the screens in Maps and Google Maps compare for the same everyday actions of searching for a destination, picking a route, looking at the instructions and more. Maps will be on the left, Google Maps on the right.

First up is the display of a found business. By default, Maps zooms in more than Google Maps, thus providing more local detail, but at the cost of losing of the neighborhood details that give you a useful overview of where the destination is actually located. Apple does a better job of focusing on the pin, and providing the discoverable right-pointing arrow for more details. But what you can’t see in the screenshot is that tapping the pin in Google Maps causes the bar at the bottom to bounce slightly, and swiping up from it displays more information. It’s more subtle and a bit less discoverable, but equally effective. I do like that Google Maps gives an estimate of driving time, even before I’ve asked for directions. 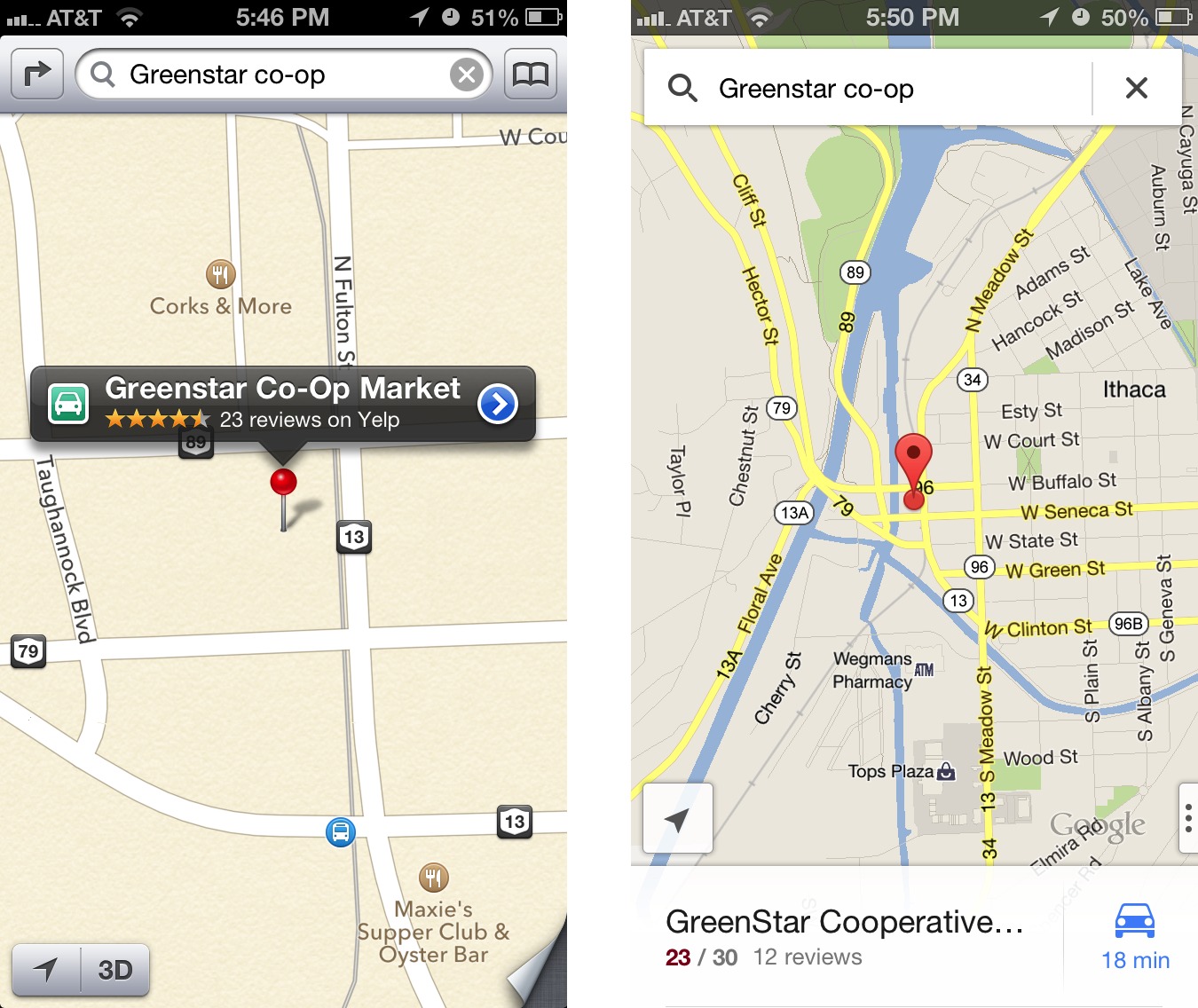 Both apps offer satellite views and can show traffic, although Google Maps gives more traffic detail (the green and yellow markers) and they don’t quite agree on where the traffic is. (And let’s face it, “traffic” in Ithaca is really pretty unimpressive at the worst of times.) 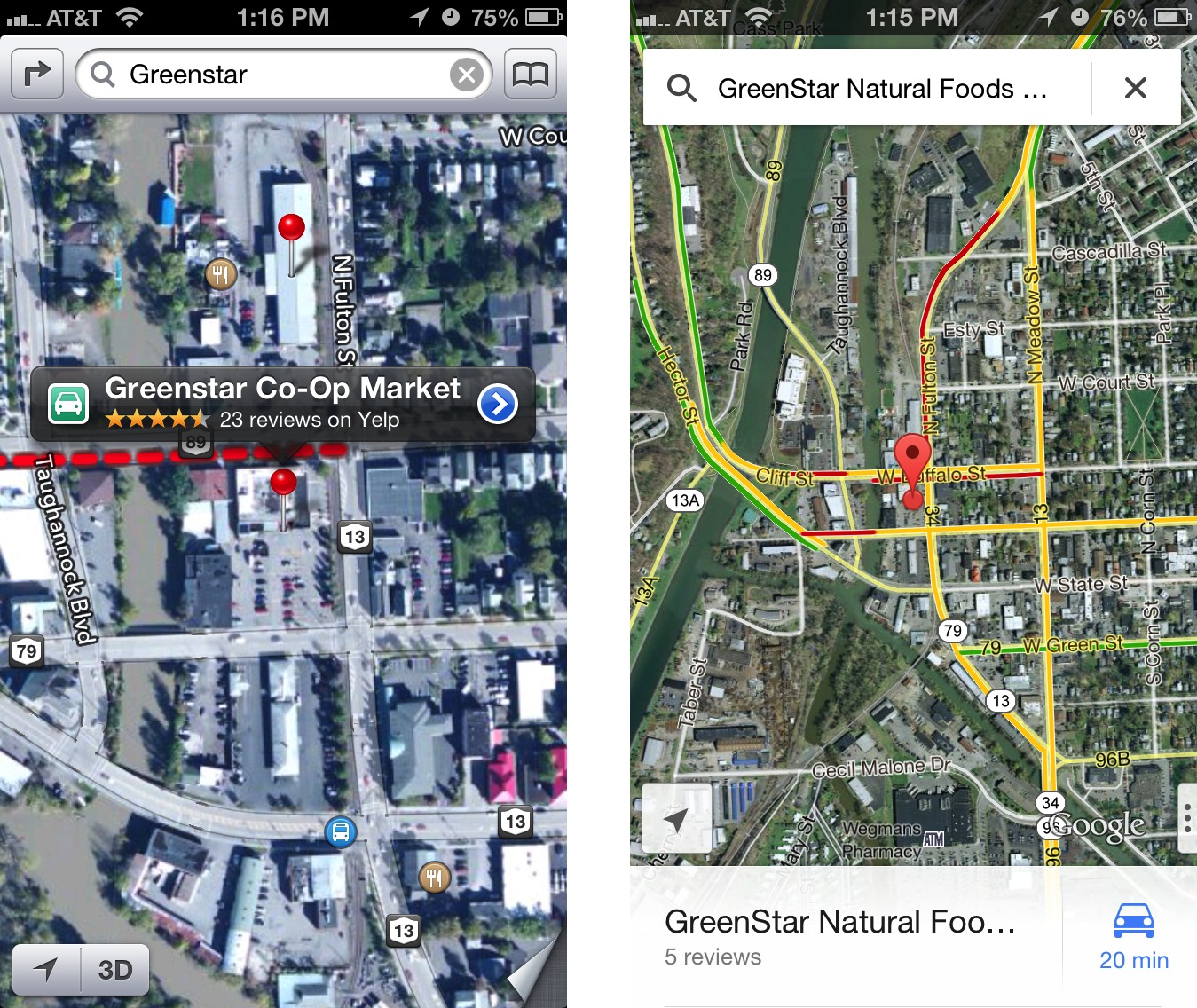 Moving in to the detail views, the main difference is in the graphical look. Apple maintains a standard iOS approach, with “tiles” of labeled data, whereas Google Maps utilizes Google’s new look (the recently updated Gmail app is similar). The available data is roughly the same, though Google shows its own data, whereas Apple relies on Yelp. Apple is more clear about how to get directions; with Google Maps, you must tap the car button in the upper right corner, which isn’t as obvious as a Directions To Here
button. 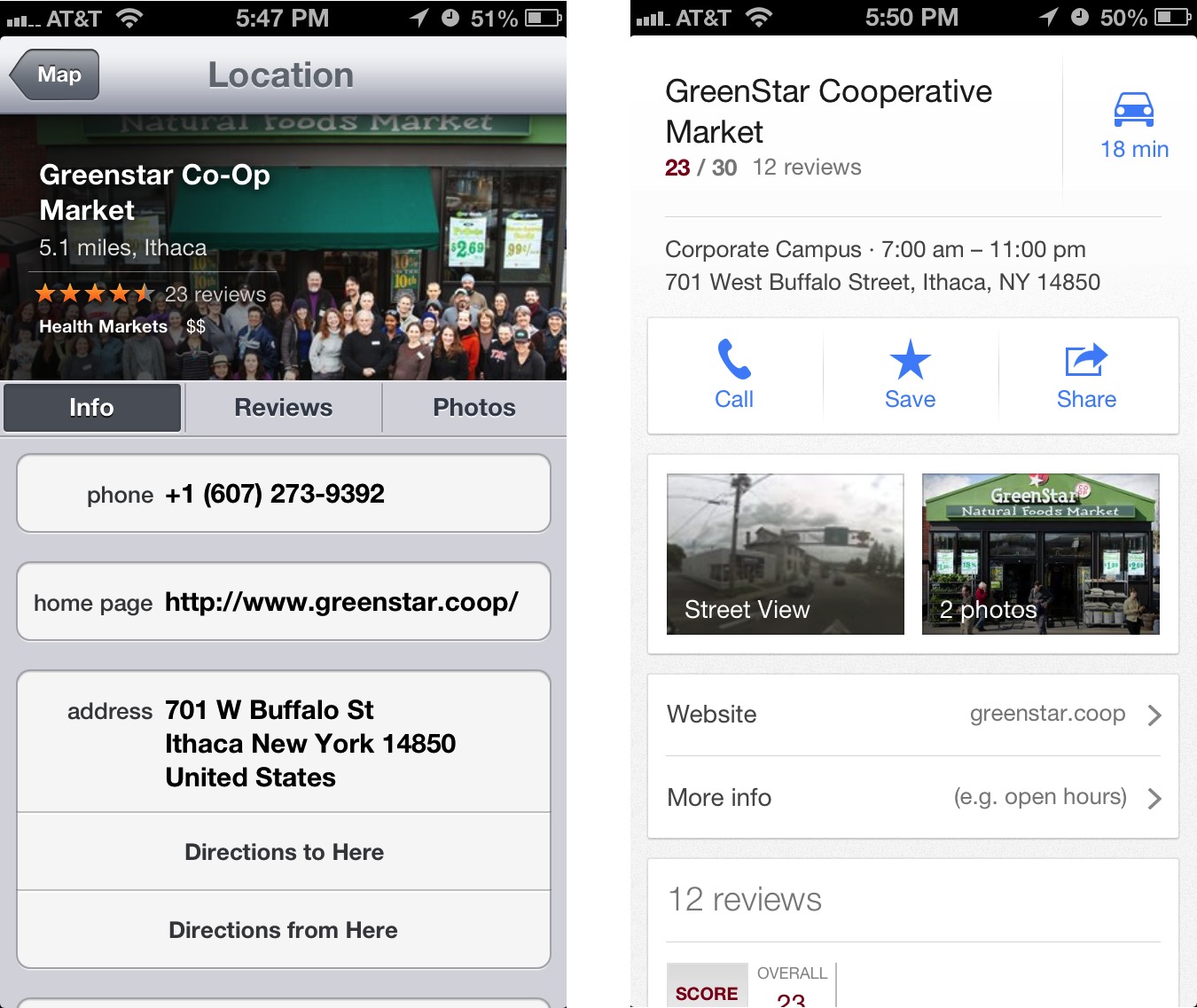 How about the interface for setting up a route? Both apps require two screens here, so I’ve stacked them below, still with Maps on the left and Google Maps on the right. Apple’s first screen, where you can enter a location and routing type (car or foot, or hand off to a transit direction app) is a bit confusing, since the End field displays the address of the place you just tapped badly. Once you tap Route, though, it’s easy to choose among the different routes by tapping them. Google Maps does better, showing you the name of
your selected destination and providing descriptions of the various options, with color-coding for traffic. I hear that the transit directions are particularly good here too — Google Maps doesn’t know about Ithaca’s bus system. Tapping a route on the first screen takes you to the second, where it shows you the graphical view, and where you can tap a different route if desired. Though I don’t have much experience yet, Google Maps seems snappier than Apple’s Maps at bringing in possible routes. 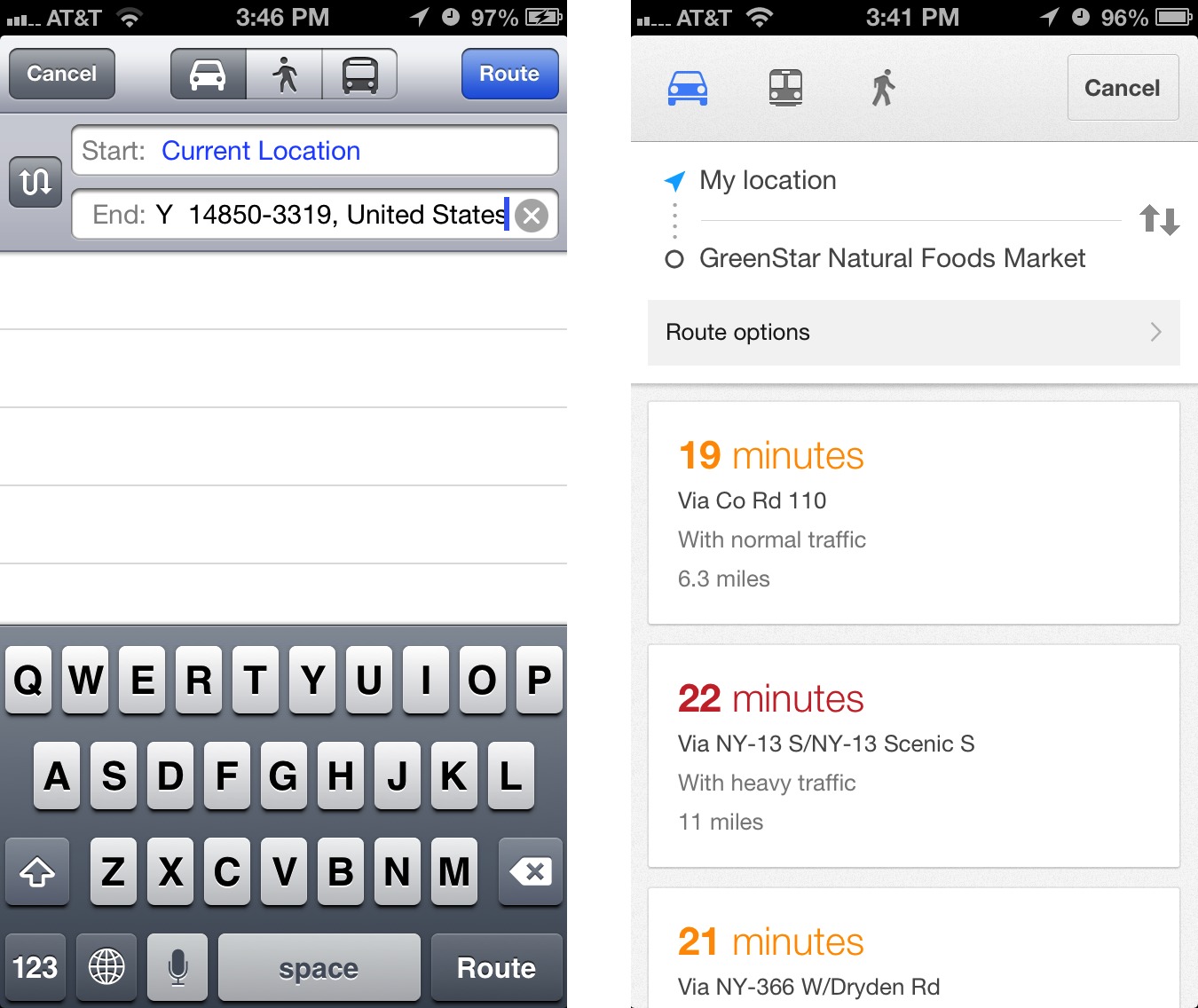 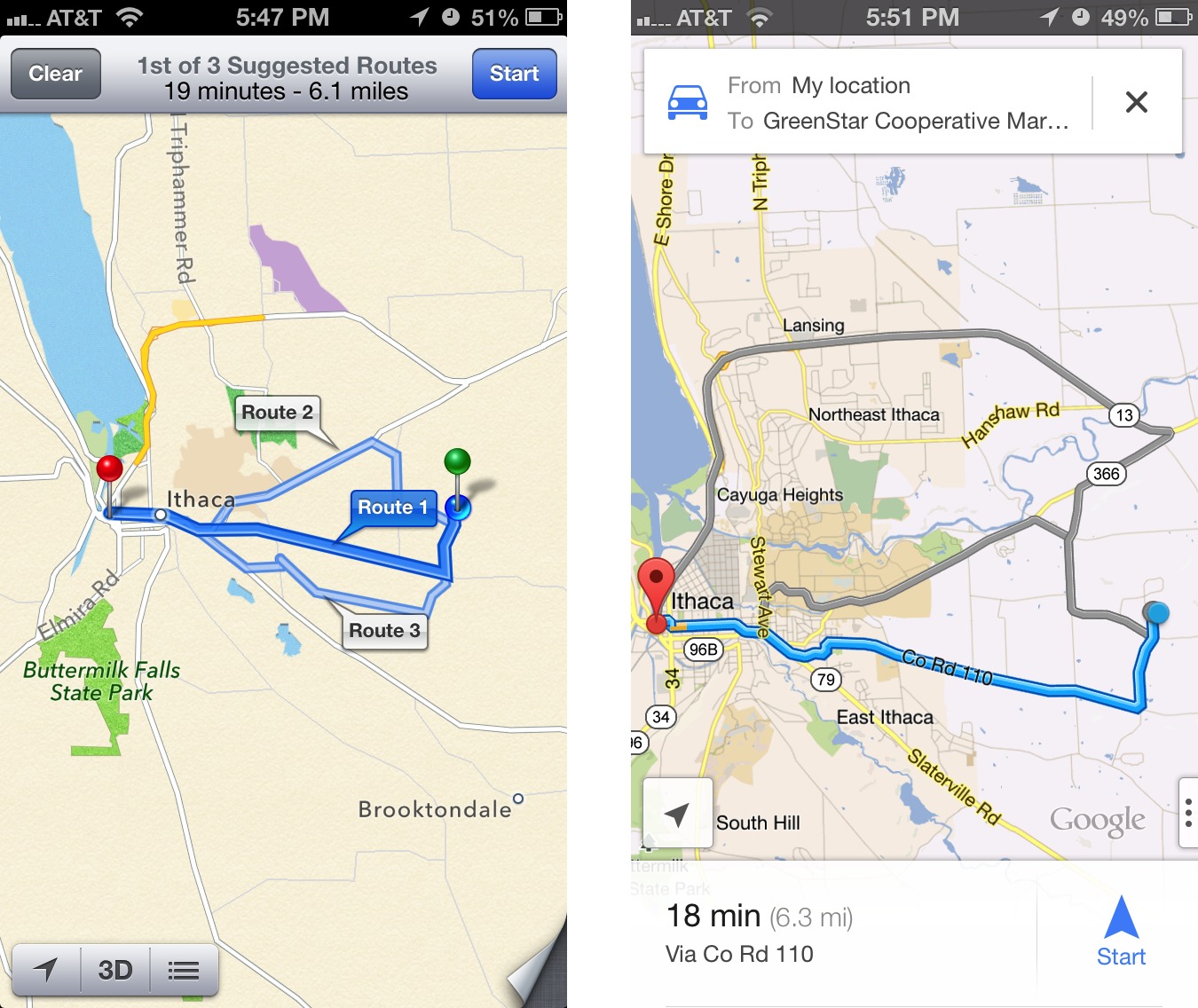 Once we actually get into the directions, Apple does some rather odd color coding — I have no idea what the green shading means — and puts up little green street signs, whereas Google Maps eschews the color coding and labels the streets themselves. Apple hides the arrival time and extra buttons behind a tap
anywhere on the screen; Google Maps shows a cancel (X) button, the estimated arrival time, and a widget in the lower right corner that can be used to reveal a turn-by-turn list and mute the voice directions. Google wins on discoverability here, since while it’s certainly easy to tap anywhere on the screen, there’s no indication that doing so will reveal Apple’s extra information and controls. 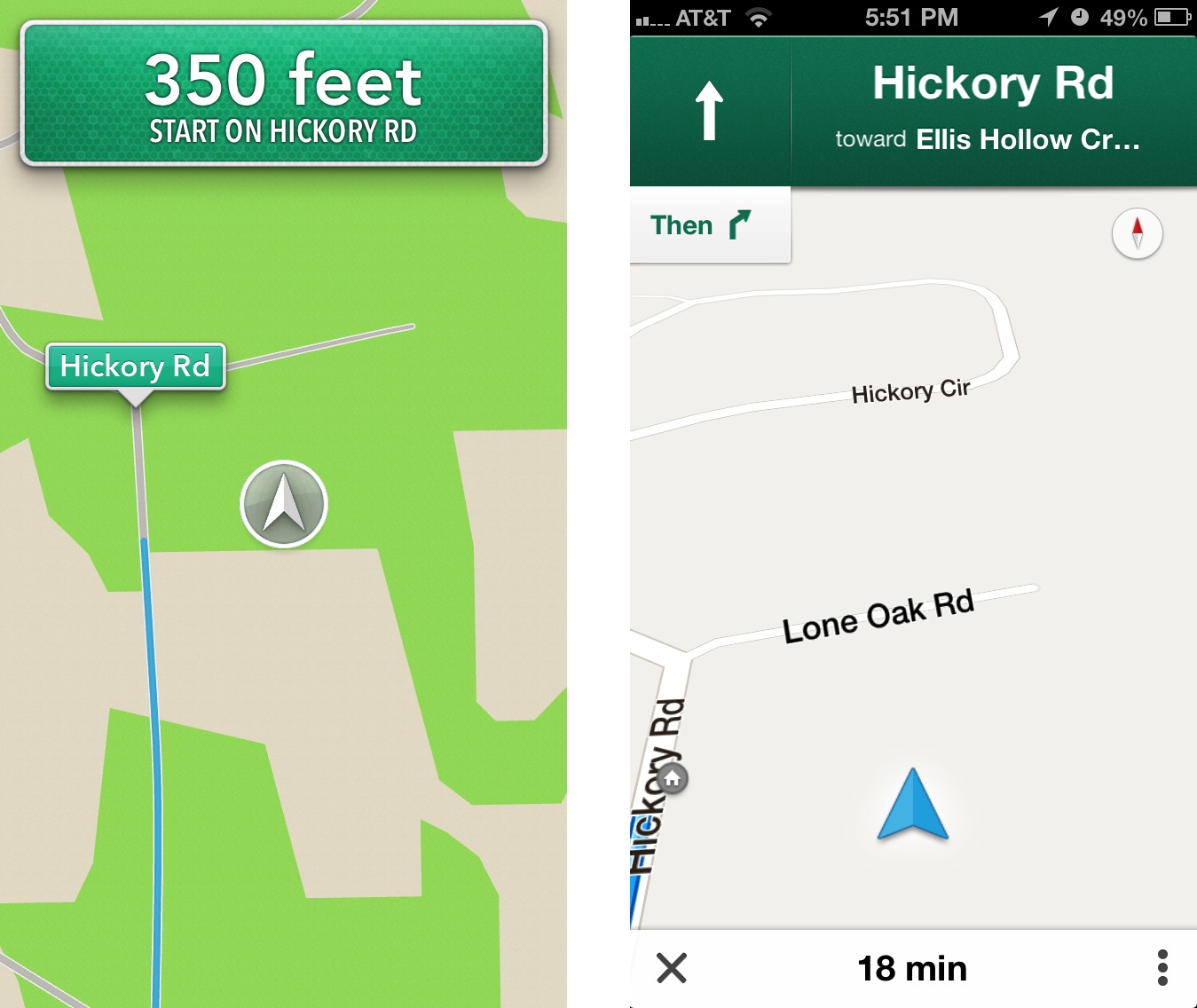 Speaking of turn-by-turn directions, they’re comparable in both good and bad ways. Apple shows more turns per screen, with a tighter layout, but Google Maps combines some essentially unnecessary directions into a single step. And while both sets of directions will work, they make the classic GPS/mapping service mistakes that cause locals to shake their heads in disbelief: taking odd turns, referring to streets by unfamiliar names, and ending up on the “wrong” street because the parking lot entrance is on a different street
than the business address. Amusingly, Google Maps has a neat “Shake to send feedback” setting — shaking the iPhone in irritation is exactly what I’d do if it made a mistake, and it provides an option to be notified when there’s a fix. The voices didn’t strike me as terribly different, but some have said they prefer Google’s voice. Personally, I’d like a good Australian accent, which makes synthesized voices sound more natural to my American ears. 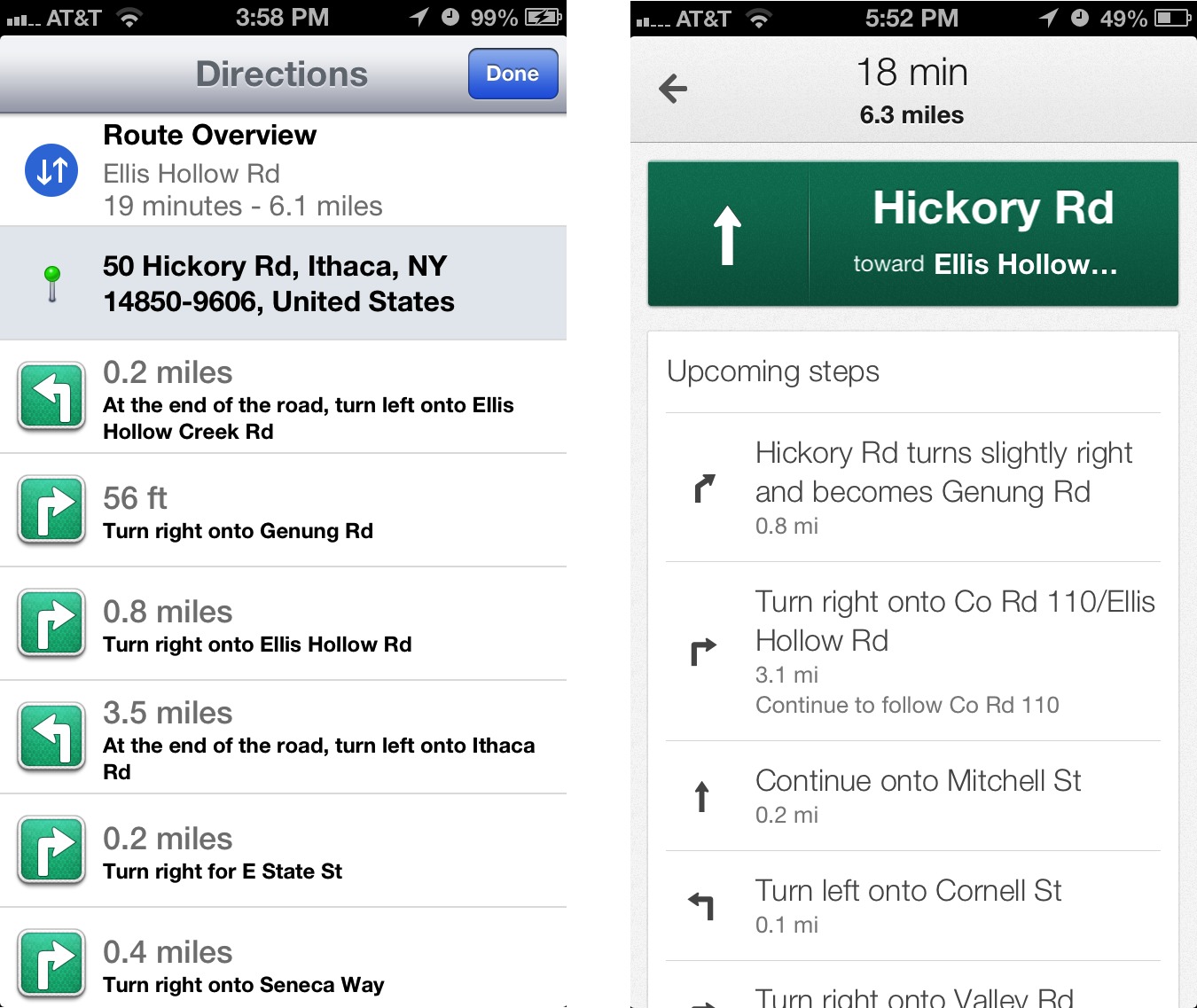 In the end, I believe that the real area where Google Maps stands out from Apple’s Maps is in transit directions, which I can’t test, but which have been praised by city dwellers like David Pogue of the New York Times, and Jacqui Cheng of Ars Technica, Dan Moren of Macworld, and Andy Ihnatko of the Chicago Sun-Times. Otherwise, both apps do a decent job and do so with entirely reasonable interfaces. Apple’s mapping data undoubtedly isn’t as good as Google’s, overall, but in most cases, I doubt that it will make a significant difference. And it’s now easy enough — thanks to the “via transit” trick — to compare routes in both apps, though I suppose that then raises the issue of which you want to believe.