Greetings again from CES 2013, or, rather, from the Starbucks at Planet Hollywood, where the Wi-Fi is surprisingly good, the venti coffees are the most expensive I’ve ever seen, and the house band in the casino is covering Guns N’ Roses. The Starbucks is conveniently located past the midpoint of my 40-year trek through the desert from the MGM Grand Ballroom to my hotel; about half of those years were through the MGM Grand, the largest hotel in the United States. I say with no exaggeration that I heard at least three people burst into sardonic laughter while following signs to the ballroom, when turning yet another corner led to yet another long hallway to be
traversed.

Tonight’s “(literally) feed the beast” press scrum was Pepcom’s Digital Experience, which alongside tomorrow’s Showstoppers serves as an alternate CES. While some of the exhibitors are also at the real CES starting tomorrow, these two shows are run by separate companies. Exhibitors here get direct access to members of the media, usually at lower cost than having a CES booth; the press comes because it’s open bar and free food, while tomorrow we’ll be paying $20 for a Coke and a hot dog at the Las Vegas Convention Center.

First up are a pair of cellular network services hoping to break the phone carrier death grip on the marketplace. Truphone provides a $30 GSM SIM card that you can slot into your unlocked mobile phone to roam internationally on the Truphone service, which the company purchases wholesale from regional providers. Truphone offers both prepaid by-the-month service and ongoing plans. In theory, you’ll save money over roaming with your existing cell phone plan — however, checking their rates for an upcoming trip to Canada gave me an eye-popping quote of $4.29 per megabyte. That’s a win over AT&T’s roaming rate of $15.36 per megabyte, but far more
expensive than the cost of AT&T’s international data package, which costs $30 for 120 MB ($0.25/MB). I’ll hang onto Truphone’s press giveaway SIM card in case they’re a good choice for future travel; it’s certainly easier than finding a local provider every time you touch down in a new country. New at CES from Truphone is a nano SIM that can be used in an iPhone 5, and a U.S. headquarters to expand their market beyond their decidedly UK-centric Web site.

On the other hand, if free 4G data is more interesting, FreedomPop would like your attention. They had on hand numerous $99 gadgets, including a MiFi-like hotspot, and cases for the iPhone 4, 4S, and iPod touch that connect to their 4G service (subcontracted from Sprint). The service is free, provided you can stay below 500 MB per month; additional data can be purchased at competitive rates, or “earned” by watching advertisements or making purchases with their partners. I’d say this is a great service for occasional users, but 500 MB is a low ceiling. 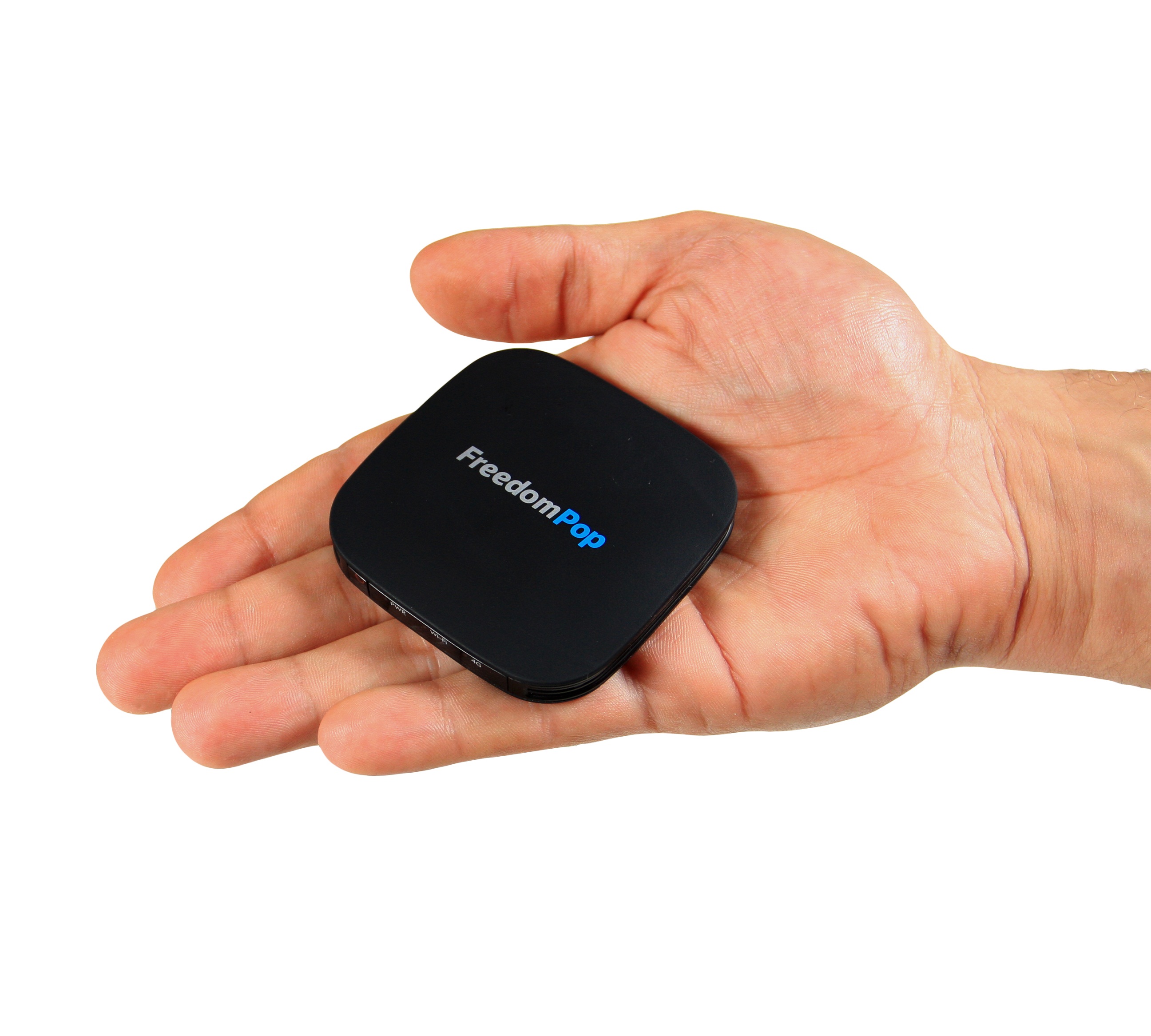 Grokr caught my attention with the tag line “predictive search for iOS.” Predictive search is another way of saying, “we’re going to track everything you do with us (and optionally on Facebook, Twitter, and LinkedIn), and use that to predict what you’re looking for when you launch the app.” In theory, you end up with a nearly psychic assistant that cuts down on how long it takes to look things up, and alerts you about upcoming events of interest. In practice, it’s all about how well
their algorithms work, but they earn points from me for the “Stranger in a Strange Land” branding. Grokr is a free download in the App Store.

Rambus was on hand with their LED replacement 60-watt bulb, displaying a lamp in what was possibly the world’s worst comparison environment for light quality and color. It was certainly bright enough to defeat my iPhone’s capability to take a decent picture, but if you’re willing to trust Rambus’s pictures of it, it’ll be on sale in the next three to six months. 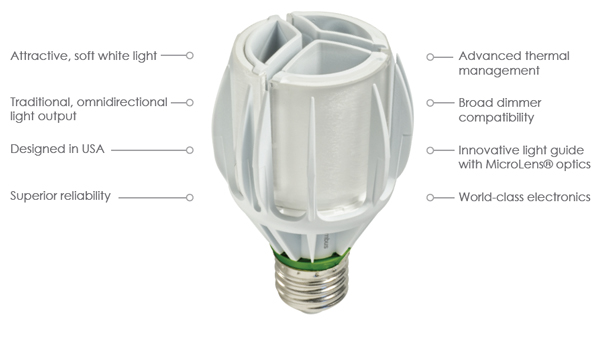 Lytro displayed their light field cameras, which allow the focus and angle of a picture to be changed after the fact, due to some optical technology which my smarter friends assure me isn’t actually magic (see “Orders Start for Unique Lytro Light Field Camera,” 19 October 2011). The hardware appears to be unchanged from last year’s model, although firmware updates starting in October 2012 have added new features to existing cameras. Lytro
demoed upcoming software that will allow photographers to share their light field pictures on Facebook, Twitter, and Web sites, with code that provides viewers the same angle and focus controls as in the camera. Possible downside: Lytro hosts these photos on their servers, and there’s no other option for sharing these pictures unless you export them to a flat JPEG first. Lytro’s cameras still cost $399 (8 GB of memory) and $499 (16 GB) in a range of colors. 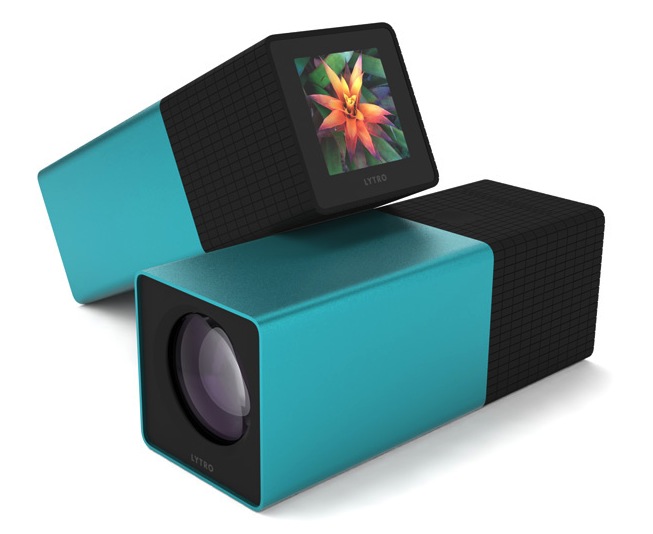 Brookstone landed another one in the “halfway between cool and ridiculous” zone with their upcoming $129.99 SoftSound Pillow, due for release in April 2013. It’s a memory foam pillow with wireless speakers, marketed as “enjoy TV without disturbing your partner” — or, more importantly for me, without waking up in the morning with headphone dents in my face.

I’ve seen several Internet commentaries saying that the Lenovo IdeaCentre Horizon 27-inch tablet is either fantastic or insane. It’s basically an 18-pound (8.1 kg) PC with a split personality: prop it up at an angle and it’s a Windows 8 computer; lay it flat and it switches into Lenovo’s Aura touch interface that reminds me a lot of the original Microsoft Surface, which Microsoft
installed in (very few) bars and restaurants. Personally, I think this is one for the CueCat category of things we’ll be laughing at in a few years; if a 27-inch touch surface were inherently that interesting, they’d be spending less time demoing the interactive Bluetooth dice that automatically integrate with games, all of which will ship sometime in the future.

Following up on yesterday’s note about the Parrot Flower Power plant monitor: okay, it’s actually much less frivolous than I thought (see “CES 2013: Cases, Chargers, Docks, and Houseplant Monitors?,” 7 January 2013). The monitor comes with an iPad app containing encyclopedic descriptions of 6,000 houseplants; if you’re like me and you can kill a plant at 100 paces, you can look plants up via descriptive tags. Once you’ve told your iPad which plant the device is monitoring, it uses sensors for sunlight, moisture, temperature, and fertilizer density to tell even people like me what to do to keep plants happy, and when. It’s still in development with no price tag yet, scheduled
for release “this year.” 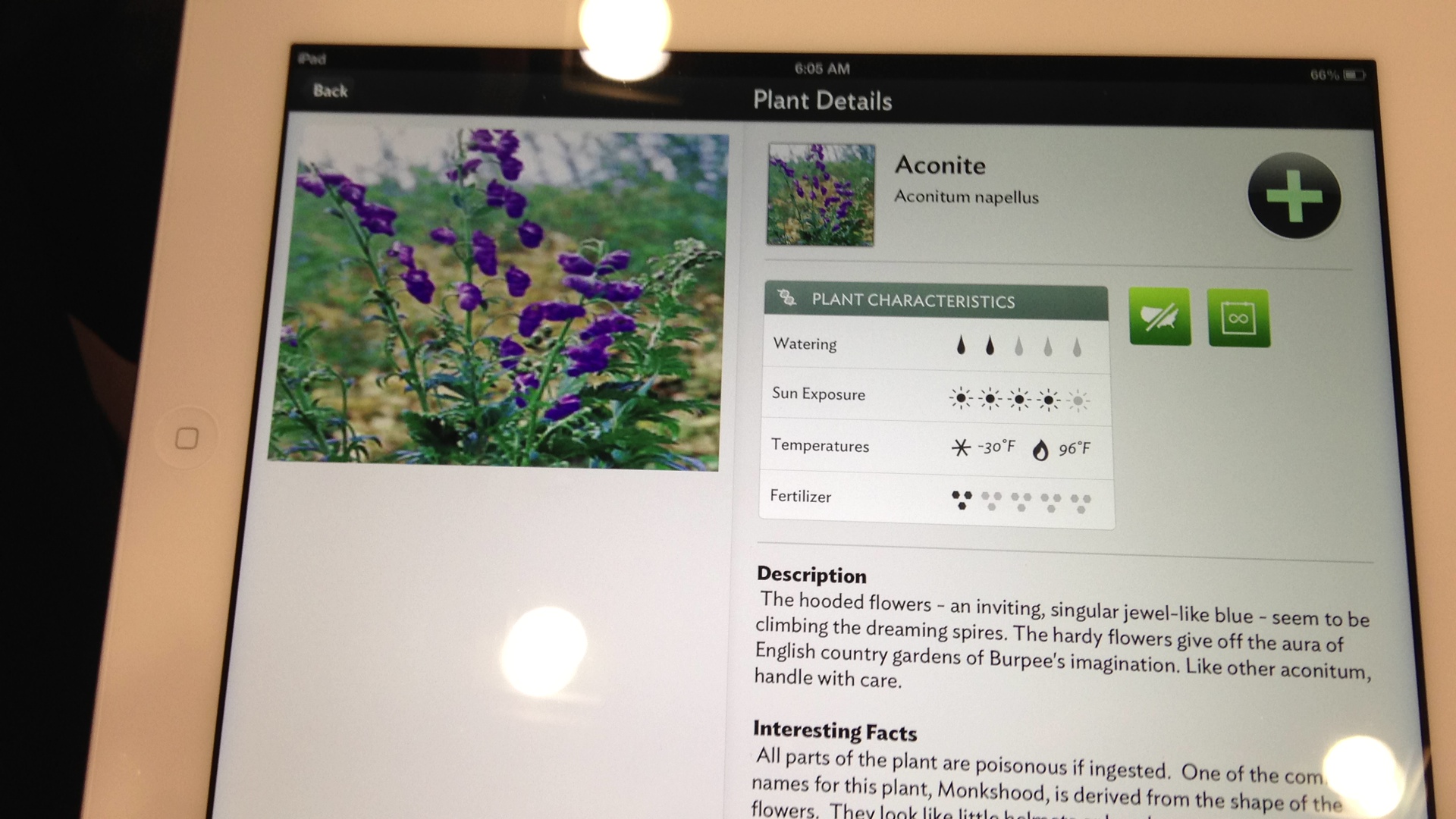 It’s rare that a booth makes me gleeful over the sheer fact that it exists, but that’s the feeling I got from Stern Pinball. Pinball was my quarter-sucking vice of choice long before I ever discovered video games, but every manufacturer except Stern has been driven out of business by the decline of arcades. Stern has taken an interesting marketing angle on this: their new pinball machines come in various sizes, with smaller units designed for home use, and larger ones for
arcades and public play. The playfield on any given game will be largely the same, but arcade models will have more animatronics and a larger backglass (the vertical display). Most importantly, home units have arcade quality playfields, flippers, and mechanisms. Stern pinball games for home use run $2,500, compared to $6,000 through $8,000 for the versions that eat quarters by the handful. 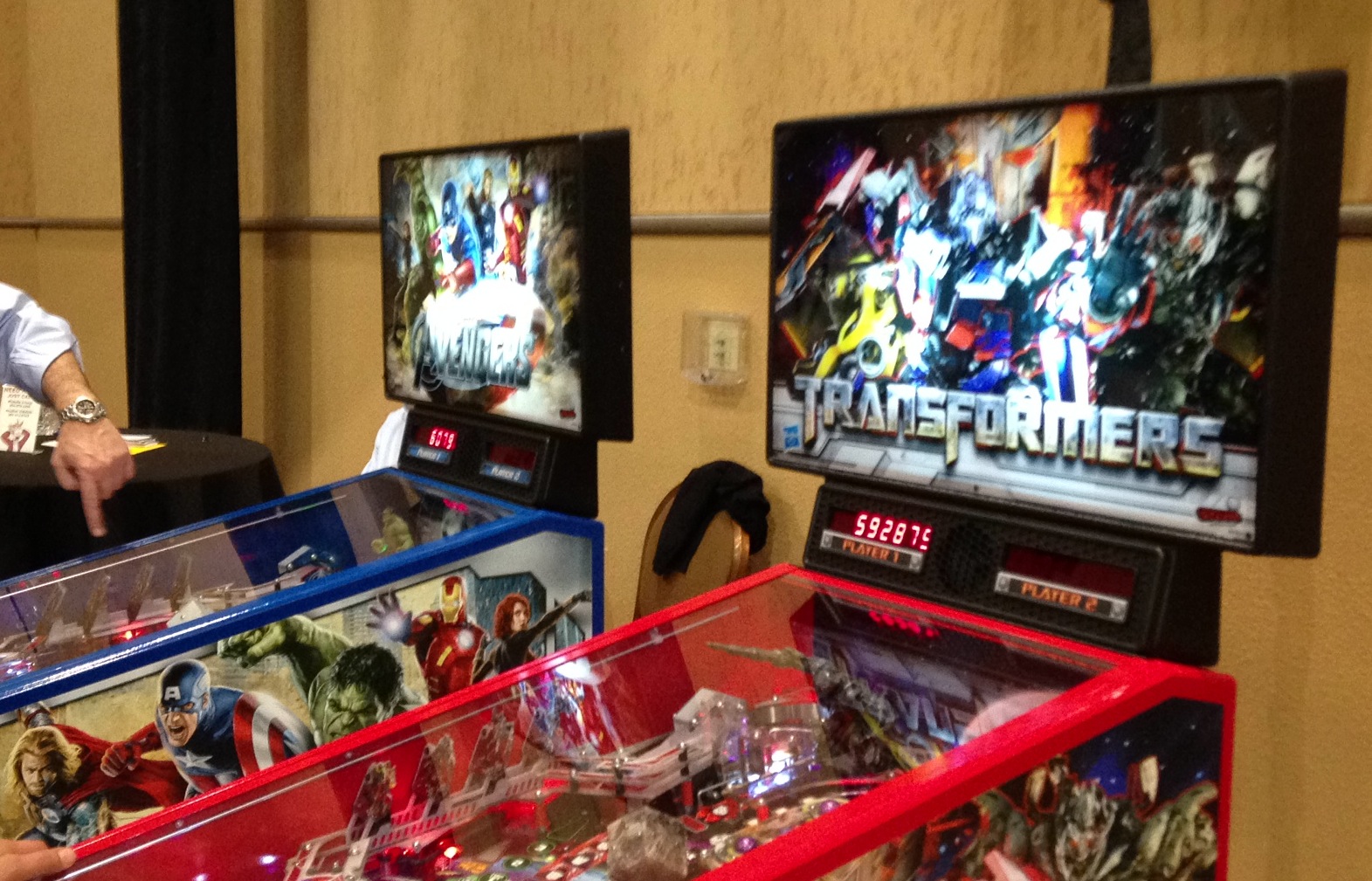 Also in the category of “surprised and glad to see them,” both FileMaker and Parallels had booths here, without much to announce in the way of tech news. (FileMaker Go for iOS has been downloaded 500,000 times as of last month, which isn’t much of a hook.) What strikes me about this is that it’s one thing to walk into a non-Mac press room and see dozens of glowing apples winking back at me; quite another for these two companies to deem it useful to drop
kilobucks on getting onto the radar of the press corps. And, for what it’s worth, despite ongoing Twitter wars about the last time Apple exhibited at CES, if FileMaker counts, Apple is still here.