Greetings a third time from CES 2013 after leaving the Showstoppers event at the Wynn, where the catering is excellent, the stores are très expensive, and the hotel Wi-Fi set a record for ridiculous by charging $20 for 40 minutes. For that price, I expect each kilobit to be carried out on a silver platter by the cast of “Downton Abbey.” As I did yesterday (see “CES 2013: Pepcom’s Digital Exhaustion… er, Experience,” 8 January 2013), I have stopped for caffeine on the way back to my hotel; it may not be as ritzy, but this is the first Starbucks I’ve been to that has its own volcano.

I have to lead off my coverage of Showstoppers with a disclaimer. It’s no secret that trade shows are infamous for providing brib… that is, “review units” to honored and respected representatives of qualified press organizations. It’s common for writers to return home with a few techie gewgaws, most of which end up on a shelf. But this time, not to put too fine a point on it, I made out like a bandit. Therefore, anytime I mention a company that gave me stuff, I’ll include the Unicode emoji symbol for wrapped present: ?. Note that outright bribery by no means guarantees that a company will be mentioned, and certainly doesn’t guarantee that they’ll be covered positively.

Ground rules properly established? Then away we go.

DisplayLink caught my eye, almost literally, with their demo of a MacBook Air running two side-by-side external monitors at 1920 by 1200 each. Those are 1080p videos you see on each screen, with room to spare. The MacBook Air was connected by USB 3.0 to a Lenovo dock driving the monitors; DisplayLink makes the chip, which will be sold in other docks through outside manufacturers, including Belkin. DisplayLink also works with USB 2.0, and will downsample the external image if it needs more bandwidth than 2.0 can handle. 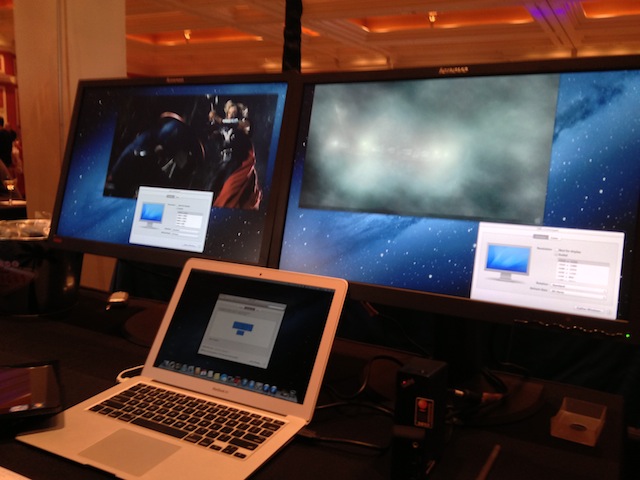 The Olloclip snap-on lens has been updated to fit the iPhone 4, 4S, or 5, and now includes an adapter for use with the iPod touch. The lens adds wide-angle, fisheye, and macro lens capabilities to the built-in camera lens. I’m at best a highly amateur photographer, so at $69 this is too pricey for me, but a lot cheaper than most lenses. I also admire its “throw it in the bag for later” gadget form factor. 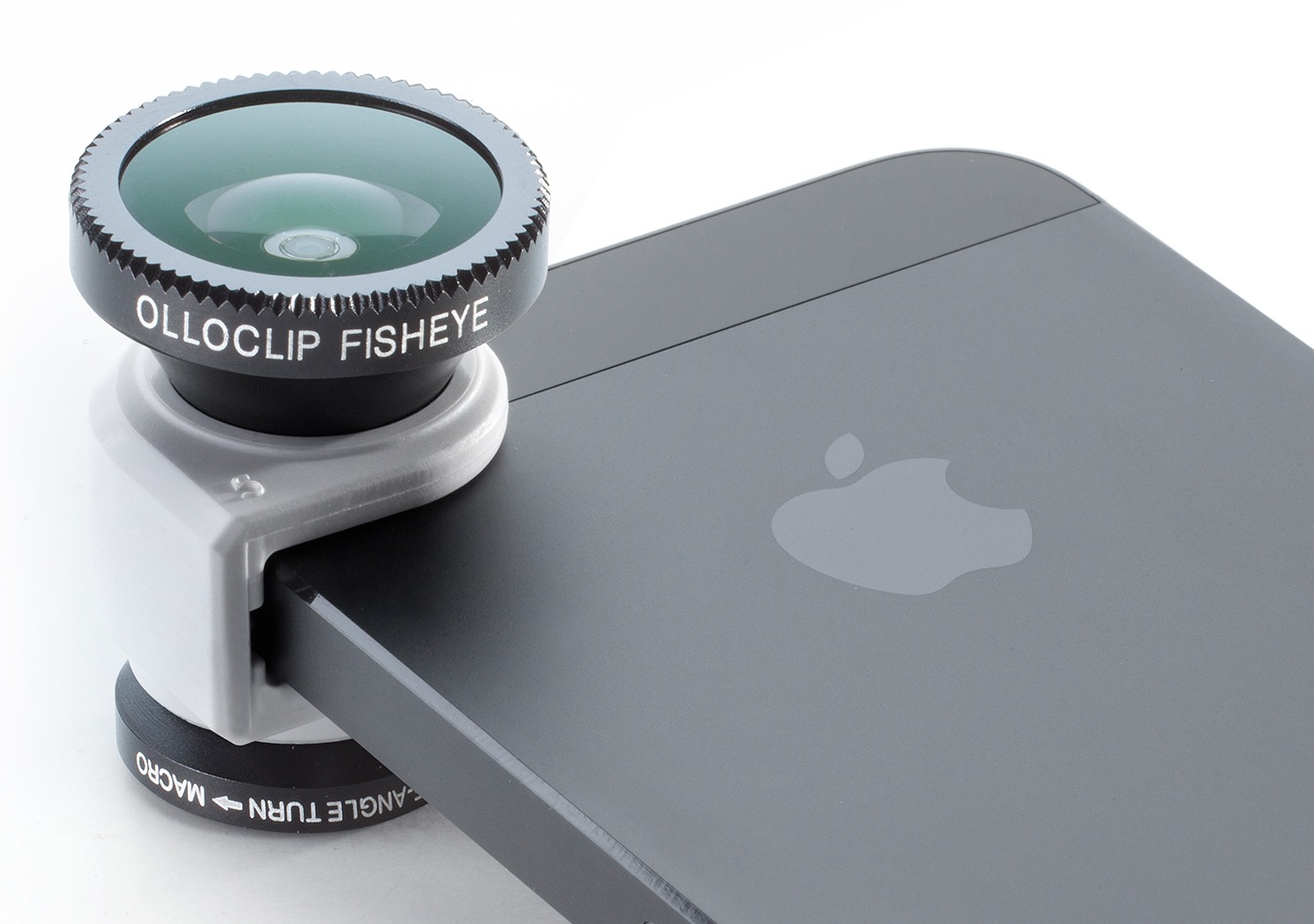 Flicpost demoed their free iPhone app that sends actual printed photos. Through the physical mail. To people who might not have Internet connections. Pricing for the first photo is $0.69 for U.S., UK, and a few other destinations, $0.99 elsewhere in the world, and $0.20 for each additional photo. This isn’t really new, but what caught my attention was the press kit, a mocked-up envelope addressed to Neil deGrasse Tyson (see
““What Makes a Technology Cool,” According to Neil deGrasse Tyson,” 9 October 2012).

Also in the blast-from-the-past category, SoloMatrix impressed me with their… yes, physical keyboard for the iPhone. I don’t know how many BlackBerry users are left who are finally making the switch, but the Spike TypeSmart slaps a decent keyboard over an iPhone’s virtual keyboard in portrait orientation. This earns a mention because it uses a case with a Lightning or 30-pin connector instead of Bluetooth; the keyboard folds flush into the case when not in use; and the demo guy remained extremely friendly even when I dropped his iPhone and snapped off the “first keyboard out of ten that just flew in from China.” Oops. Pre-order pricing is $35, $60, or $150, depending on the type of case that accompanies the keyboard. 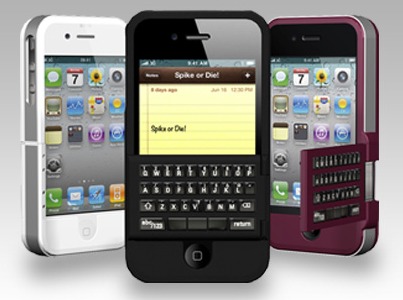 I am not an audiophile and my hearing is awful (see “iOS Hearing Aids… or, How to Buy Superman’s Ears,” 8 February 2011), so I’m not qualified to review the audio quality of any headset. But I like the idea behind the $69 BlueAnt Ribbon ?, which separates out the Bluetooth part of a Bluetooth stereo headset into a normal 3.5mm headphone jack that can be hooked up to anything, such as your existing headset or
other speaker equipment. The Ribbon can attach to your clothes, and it’s lightweight enough to dangle when used as a Bluetooth driver for external speakers. I’m a fan of this approach, because I’ve lost count of the number of times my laptop bag has yanked my wired headset out of my ears. 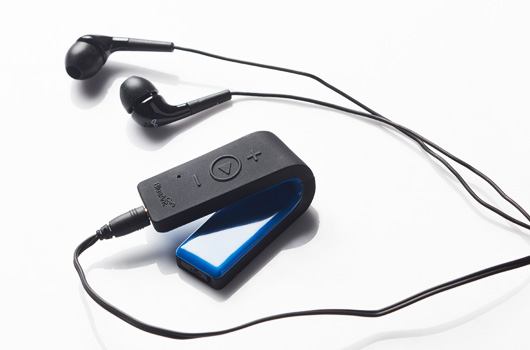 I’m also not qualified to review children’s apps, as I tend to like children just fine… in a Béarnaise sauce with a side of leafy greens. That said, TCKL’s Drip Drops Color the World 3D, for ages 2–6, looked pretty nifty. The child (or an adult brain-fried by childrearing) is led through a storyline where she can color 3D objects, which then become part of future events; a globe canvas in the first scene becomes the ball an onscreen character plays with in the next scene. It will be
available in late January 2013 (and is different from the free 2D version already in the App Store); pricing hasn’t yet been set. Warning: do not click on this link if you are not ready for astonishingly cheerful music, such as if it’s 3:30 AM in your Las Vegas hotel room.

Perhaps also fitting into the “Jeff hates children” category is the Tethercell. It’s a casing that fits over a AAA battery and turns it into a AA battery with Bluetooth. This then connects to a smartphone app that enables you to set times-of-day when the battery can be used, and mercifully provides you with a master Off switch for all of your Tethercell-enabled toys. The Tethercell is an Indiegogo pre-order at the moment, although the booth demoed a prototype and seemingly complete iOS software. As a representative of childless people everywhere, I beg you to make this exist.

Spigen SGP is the only vendor that earned its place here through outright bribery; I had passed their booth without stopping until someone noticed my bare iPhone 5 and said, “You know they’re giving away screen protectors, right?” It’s the quality of the screen protector that led to their inclusion: I had expected yet another flimsy plastic film, but instead, their line of $27.99 GLAS.t ? and $34.99 GLAS.tr ? protectors are oleophobic tempered glass, which feel identical to a bare iPhone 5 screen. The GLAS.tr has rounded corners that resist chipping when used on an otherwise uncased iPhone, while the GLAS.t is recommended for an iPhone with case. When the iPhone is exposed to a potentially screen-shattering event, both protectors are designed to absorb the force and perhaps crack themselves, keeping the iPhone display intact. Spigen also gave me their $17.99 Slim Armor ? iPhone
case, which is attractive but otherwise unremarkable, and which will remain untested for drop protection for as long as humanly possible. iPhone 5 versions of all of the above are new at CES or very recent releases.

One for the “can’t believe it” category: if you always wanted a Bluetooth-enabled fork, HAPIlabs has one. The HAPIfork reminds you to eat more slowly by vibrating when you eat too fast. The best bit: it can tell because it uses the electrical conductivity of your mouth to close its circuit. HAPIfork works with a computer over USB, a smartphone over Bluetooth, and your deep sense of existential despair over a pint of Ben & Jerry’s.

Also in the “can’t believe it” category is NeuroSky’s $129.95 MindWave Mobile, which they recommend for use with Neurowear’s $99.95 Brainwave Cat Ears. The MindWave Mobile is a headset with a sensor that rests on your scalp, and then ostensibly uses your brain’s conductivity to interact with smartphone apps — or the Cat Ears, which perk up or droop based on how much attention you’re paying at any given moment. Facial expressions alone are so 2012. Shown below are the $20 Obsidian replacement ears if you really want to be a black cat. 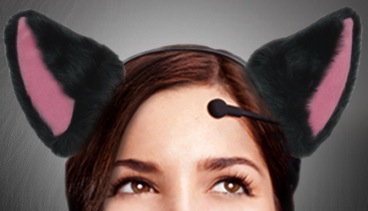 Last, and very definitely least are the LiteBrix. I include them because they inadvertently infected me with the 1970s Lite Brite commercial as a permanent earworm, and the only cure is to share the misery.

Comments About CES 2013: Showstoppers from Useful to Insane