Focused largely on expanding global LTE coverage, Apple has released iOS 6.1 for the iPhone, iPad, iPad mini, and iPod touch with an additional 36 carriers for the iPhone 5 and 23 carriers for LTE-enabled iPads. The big LTE switch is turned on for both the iPhone and iPads in markets such as Denmark, Finland, Italy, and Switzerland, while several Middle Eastern countries (including Kuwait, Saudi Arabia, and United Arab Emirates) get LTE just for the iPhone 5. You can find a full list of LTE markets and carriers for specific models of iPhone and iPad at Apple’s Web site.

Beyond LTE connectivity, the update adds the capability to use Siri to purchase movie tickets from Fandango (only in the United States), and it once again enables iTunes Match subscribers to download individual songs from iCloud (a previous iOS update had quietly removed this option). A Reset Advertising Identifier button is also added to the Advertising options (Settings > General > About > Advertising), enabling you to flush your current Advertising Identifier (much like deleting history from a Web browser) so that you’re hopefully served more relevant ads going forward. Of course, you can also turn on the Limit Ad Tracking option here, which not only reins in targeted advertising but can also help minimize cellular use (see more
cellular data tips in Matt Neuburg’s “Mysterious iOS 6 Cellular Data Usage: A Deeper Look,” 24 October 2012).

Josh Lowensohn at CNET also notes several smaller changes not mentioned by Apple, including a reworking of the lock screen’s music playback controls. Now when you double-press the home button, the playback controls are pushed up to replace the current time display, giving you a better view of your lock screen wallpaper image. Plus, the controls are further apart, making it less likely that you’ll accidentally skip to the next episode of a podcast when attempting to pause playback, an annoying bit of bad interface in iOS 6.0.x. We’ve also heard one report that iOS 6.1 resolves a troubling bug with streaming media that
resulted in streamed videos being downloaded in the background even after switching away from Safari. We fully expect that there are other changes — perhaps lots of them — with which Apple hasn’t seen fit to burden us weak-minded users. If you run across any, let us know in the comments. 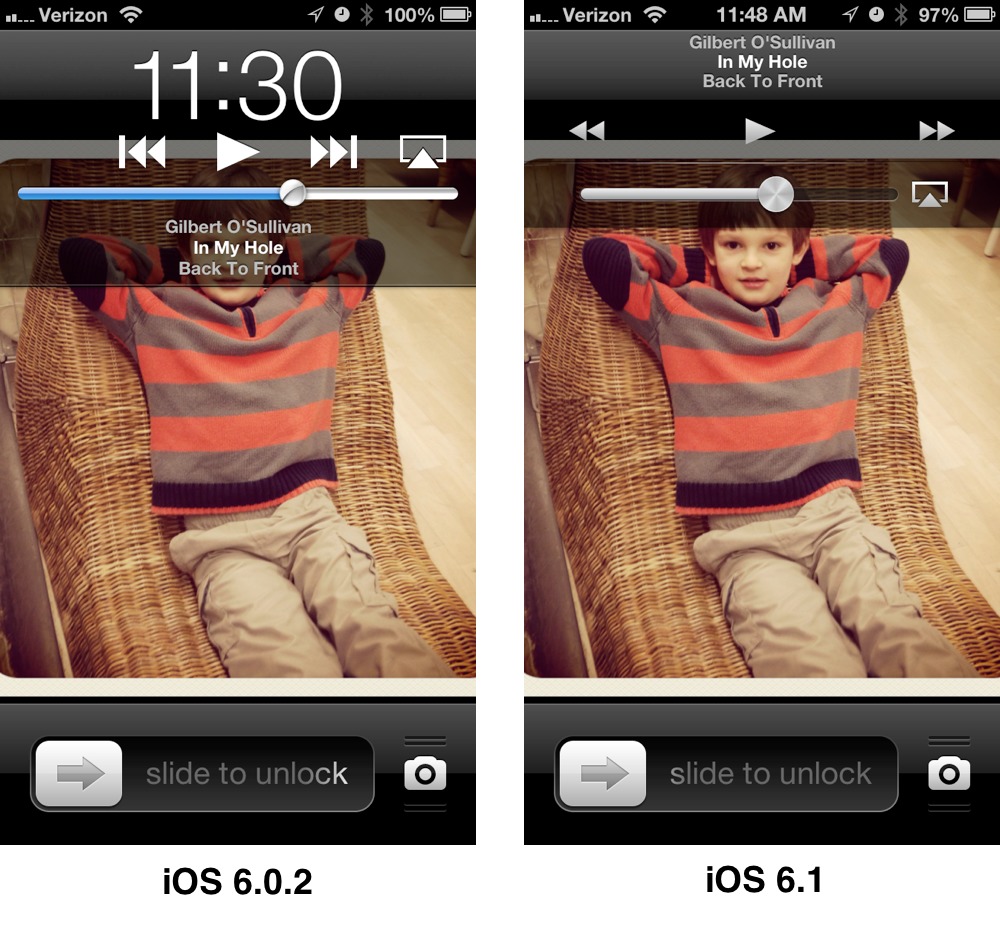 As usual, we recommend going the over-the-air update route if you have Wi-Fi connectivity (Settings > General > Software Update) as this method downloads only the deltas that are much smaller and faster to install. The over-the-air deltas for the iPad and iPad mini weigh in at 76 MB and 83 MB respectively (compared to 1.08 GB if downloading the full update through iTunes), while the iPhone over-the-air update is 107 MB (compared to 989.5 MB in iTunes). The update is free, and it can be applied to the
iPhone 3GS and later, iPad 2 and later, and fourth-generation iPod touch and later.

Be warned that when you update, some of your settings may be reset to defaults, so it’s worth walking through the Settings app and making sure everything is set the way you want. In particular, TidBITS staffers have noticed iCloud- and iMessage-related settings being reset.

In other iOS news, the Apple TV Software also received an update to version 5.2, which adds Bluetooth keyboard support, the capability to send audio to AirPlay-enabled speakers and devices, and support for iTunes in the Cloud — enabling you to stream purchased music directly through the Apple TV rather than stream it from a computer on your network. On the downside, at least some people are reporting that the iPad version of the iOS Remote app can no longer control the Apple TV; the iPhone version of Remote has no such problem. The update is available for second- and third-generation Apple TV models.