My friend Ivan Drucker, a consultant in New York City, posed an interesting question at breakfast on the first day of Macworld/iWorld 2013 in San Francisco. “Would Macworld exist, if it hadn’t always existed?” he asked. The answer, we decided, while walking past the surprisingly aggressive panhandlers in Union Square, was no, that the traditional trade show is no longer the main solution to the problem of obscurity, that companies with products to bring to market can do so in many other ways today.

Two days later, Chris Bastian, another friend who heads up the MetroMac users group in New York City (I have to go to San Francisco to see New Yorkers?) noted that, in the past, Macworld served essentially three purposes: a toy store where Mac geeks could shop for the latest and greatest; an old-time revival meeting where everyone would come once a year to get the religion during Steve Jobs’s keynote; and summer camp, where you’d catch up with friends every year. And, he observed sadly, the Apple keynote is no more, fewer people return for camp each year than in the past, and the toy store is more about looking than buying.

And yet Macworld keeps plugging on, bringing together hundreds of companies and many thousands of attendees for three days of non-stop hubbub on the show floor; numerous talks, sessions, and panels; and, at least for those of us with a long history at the show, invaluable face time with far-flung colleagues, customers, and business partners. No, you don’t see IDG World Expo or other companies starting lots of new technology-related trade shows, for the most part (O’Reilly’s Maker Faires might be a counter example), but the fact is, we’ll keep having Macworld/iWorld as long as it’s profitable to put on, and it remains profitable because it still offers the most concentrated discovery experience for new Apple-related
products.

We could never cover every product exhibited at Macworld/iWorld, but here is the first set of our picks for the products that stood out for us — if you ran across others, be sure to let us know in the comments. This list doesn’t include everything we want to share, but I’m exhausted from a number of nights of interrupted sleep, so tune in later this week for more of our show picks.

Live Vicariously Through Your iPad — It will probably be some time before the Double telepresence robot from Double Robotics becomes commonplace, but it easily took the prize for the coolest product at Macworld/iWorld. Double consists of a self-balancing driving cylinder with an extensible stalk, topped by an iPad. The idea is that you can use another iPad over the Internet to control where your Double goes and see what its iPad camera sees while displaying your face on its iPad, all in real time. You can even raise and lower the stalk to maintain face-to-face conversation whether the other people are sitting or standing.
Double Robotics suggests that Double might be used for remote meetings, college tours for potential students far away, mobile kiosks for retail stores, and more — I could also imagine it being used to keep an eye on an elderly relative. Double weighs only 15 pounds (6.8 kg) and can operate all day on a single charge. It’s not cheap though, listing for $2,499 and available for pre-order for $1,999, with an early 2013 ship date. 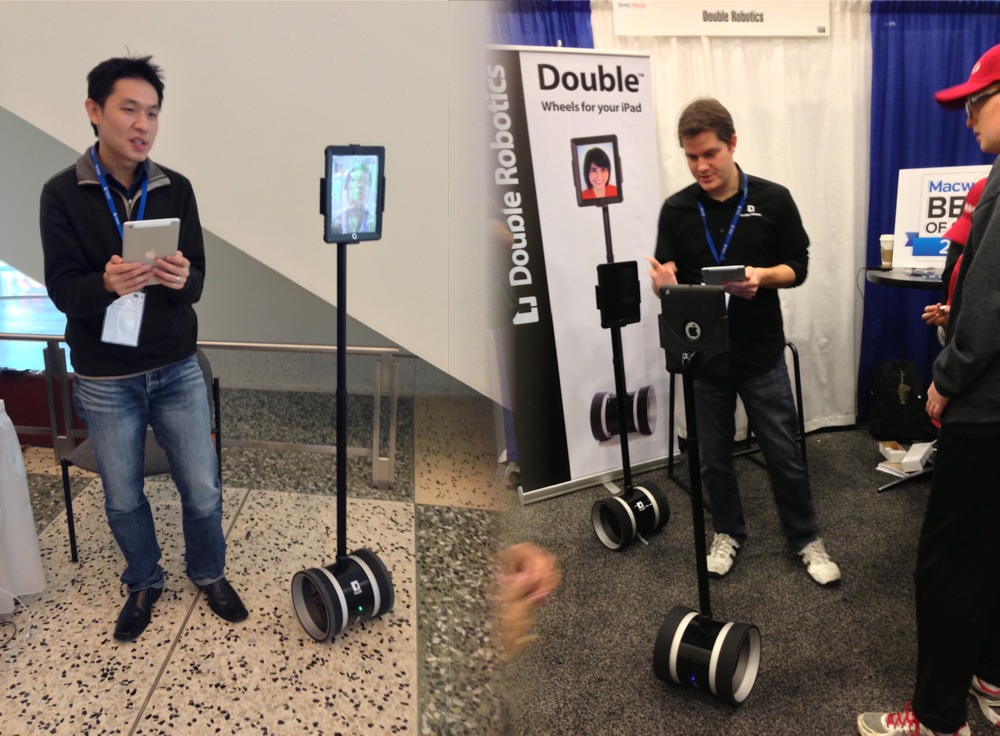 Mouse with Mauz — If you’ve ever accidentally put your hand down on your iPhone next to your keyboard, expecting it to be a mouse, you’ll love the Mauz, from a startup called Spicebox. Mauz is a Wi-Fi-based dongle that plugs into an iPhone’s dock connector or Lightning port and communicates with special software on the Mac to translate movements of the iPhone into movements on the Mac. With all the iPhone’s sensors, this goes well beyond simple sliding back and forth on the desk — Spicebox demonstrated turning a Mauz-equipped iPhone around in mid-air to rotate a 3D model in Blender and showed how hand swipes above the iPhone
could be detected by the iPhone’s camera to move back and forward in a Web browser. The communication between the Mac and Mauz is two-way, so when the Mauz software on the Mac detects an application switch, it can display specialized controls on the iPhone screen beyond the basic buttons and scroll area. Mauz isn’t yet available; Spicebox anticipates shipping in about 6 months (and the Lightning port version may be delayed more, due to needing “Made for iPhone” approval from Apple). Pricing is set for $69.99, but you can pre-order today via Kickstarter for $45. (The Kickstarter project reportedly doesn’t have to fund for Mauz to be
produced; the company is using it more to get the word out and get pre-release feedback. And what Spicebox would really like is to have Mauz acquired by a company like Logitech or Microsoft with reach into the pointing device market.)

Transporter: Dropbox You Control — One theme of discussions we had at the show was just how comfortable different people are with cloud-based services. Our 14-year-old son Tristan is at one extreme, nearly refusing to work with local files in Pages or iTunes in favor of Google Docs and Spotify/Pandora. On the other end is an author who was so uncomfortable with cloud-based services that he bought a pair of the just-released 1 TB Transporters from Connected Data purely to maintain and sync local copies of his book in progress. The Transporter is an Ethernet-connected hard drive that can synchronize and back up files with both
computers and other Transporters, thus creating what is effectively a Dropbox-like service where all the data resides on devices you control. Files are synced transparently in the background — to as many Transporters and computers as you control — but the data is never stored in the cloud. Professionals interested in the Transporter include lawyers, who may have significant client confidentiality requirements surrounding the storage of legal documents, and doctors, who are required by the HIPAA legislation in the United States to maintain off-site backups of all records in a secure form. Connected Data sells the Transporter in 1 TB ($299) and 2 TB ($399) sizes, but you can also get an empty Transporter ($199) and add your own 2.5-inch
hard disk.

Walk While You Work — A number of us, including me and Glenn Fleishman, have switched to standing desks (although I’ve been forced back to sitting temporarily while a nasty case of plantar fasciitis resolves itself). I normally just stand, but Glenn followed the lead of our buddy Lex Friedman, now writing for Macworld, and has installed a treadmill under his desk. If that’s not feasible for you, but you still want to keep moving at your desk, check out the InMotion E1000 Elliptical Trainer from Stamina Products, which we ran across at the Anthro booth at
Macworld/iWorld. It’s a compact elliptical machine with two foot pedals (no handles to get in the way of your desk) that go in both directions. A tension knob adjusts the amount of force necessary, and an electronic counter tracks number of strides per minute, total number of strides, exercise time, and calories burned. Weighing in at only 24 pounds (10.9 kg) and requiring a footprint of only 20 inches by 12 inches (50.8 cm by 30.5 cm), the InMotion Elliptical Trainer might be the perfect way to get some exercise while working in environments where a treadmill is infeasible. The range of motion isn’t large, but it’s quiet and inexpensive, listing for $199.99, and available from Amazon for $100 or less. It seemed feasible to type while using it, though we weren’t able to test that at the show. And, before you ask, no, it can’t generate electricity too. 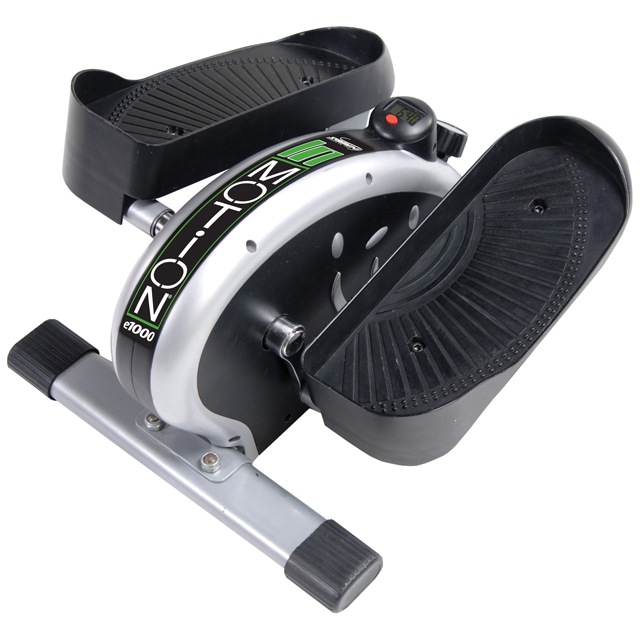 Stand Up Straight, Young Man! — If your posture isn’t what it should be (imagine yourself suspended from a string attached to the top of your head), you can suffer from a wide variety of maladies, ranging from back pain to knee trouble. The new LUMOback sensor and iOS app can help you learn better posture. The sensor is affixed to a belt that wraps around your waist; it vibrates gently when it detects you slouching. The free LUMO app (compatible only with the iPhone 4S and 5, the fifth-generation iPod touch, and the third- and fourth-generation iPads, due to its reliance on the Bluetooth low energy feature of Bluetooth 4.0) tracks
your progress and helps you improve over time. LUMOback costs $149 and is available now in two sizes.