One of the most talked-about releases of late has been Napkin, a new image annotation and diagramming app from Aged and Distilled. Napkin sets out to make visual communication as fast and simple as scribbling on its namesake. To drive the analogy home, its default background is a napkin texture. 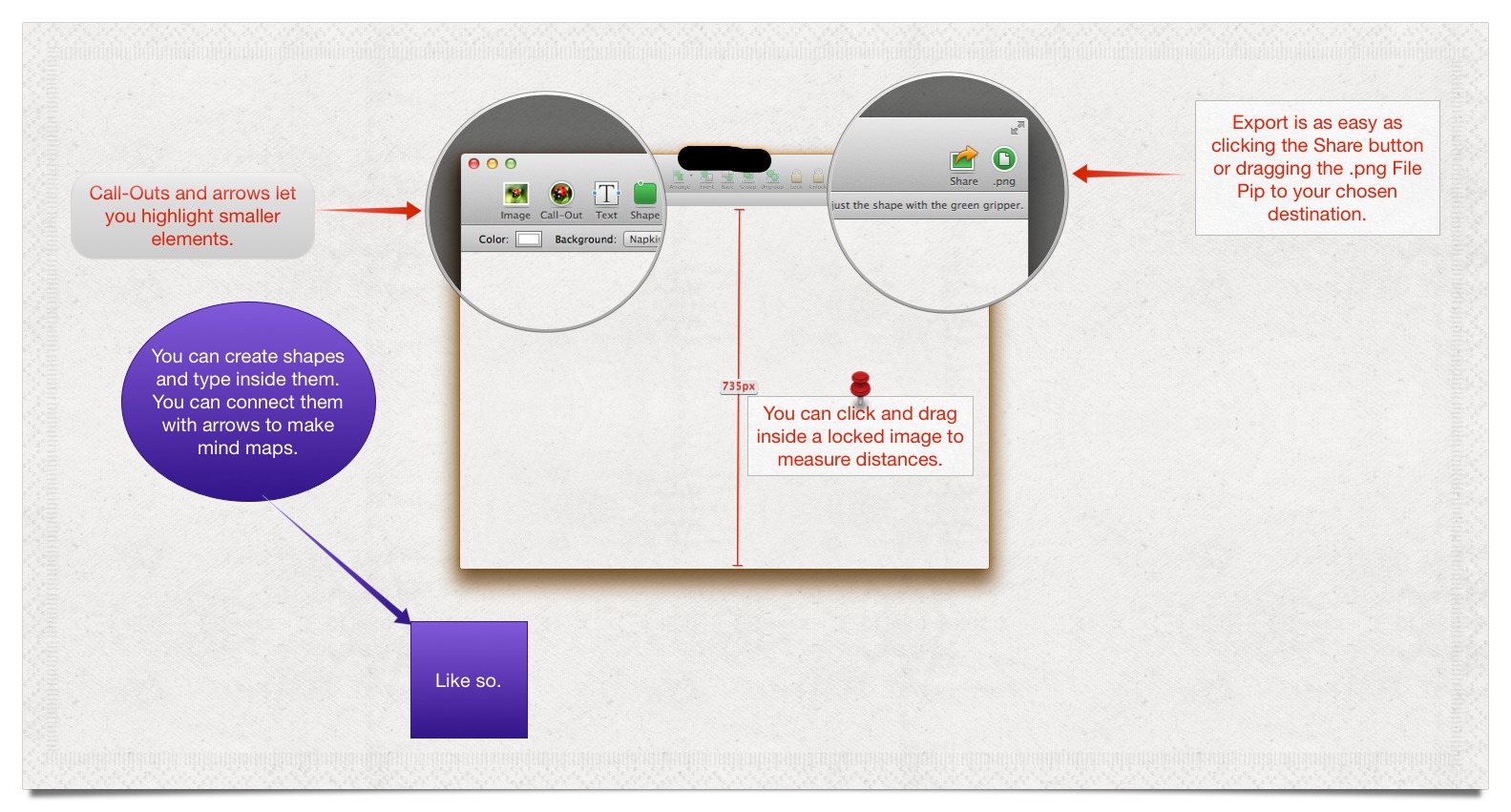 Napkin focuses on making visual communication as simple as possible. Unlike most applications in its class — and most Mac applications in general — Napkin emphasizes gestures, and feels as though it would be as at home on the iPad as it is on the Mac. It’s hard to imagine that an iOS version isn’t in the works, but Napkin is otherwise so aligned with current Apple thinking that it’s limited to OS X 10.8 Mountain Lion and saves to iCloud by default (and is thus limited to the Mac App Store).

There are three ways to place an image on your napkin: open an existing file, take a screenshot, or snap a picture from a webcam. Screenshots can be taken of an entire window, or you can click and drag to select only part of a window. You can add as many images to a particular napkin as you need.

Once you have the image(s) you want, annotations are intuitive, and can be added via menus or the toolbar, or by gestures. If you want to add some text, just start typing. If you’d like to point out something with an arrow, just click, drag, and draw a straight line. To draw a shape, press the Command key, and click and drag to draw it out. You can lock an object, and if you drag an arrow out from that object, the arrow remains linked to the object, so if you unlock it and move it around, the arrow stays connected. If you draw a line inside a locked object, Napkin instead creates a measurement line, with a text label of how many pixels long the line is.

You can use all of these Napkin features together to create diagrams and even mind maps. You can add text directly inside a shape, so you can draw a bubble, add a thought, then lock the bubble. Then, you can draw an arrow out from that thought bubble to your next idea.

Image captures can be decorated with frames, which act somewhat like borders, and with backgrounds, but the selection is limited. Napkin gives you six frames from which to choose, but you have no way to adjust them. I have yet to find one that I actually like. The two I find acceptable are Simple and Photo, which are tasteful, if wide, white borders. There is also the Capsule frame, which rounds the corners of the selected image. Three of the rest are skeuomorphic and just feel silly: Thumbtack, Tape, and Paperclip, each of which adds a cartoon version of its namesake to the top of a captured image. Backgrounds are even more limited, with three options: Transparent, White, and the aforementioned Napkin, which resembles the texture of a
paper napkin.

If a captured image contains sensitive information, you can double-click on it to redact. Napkin zooms in on where you clicked and gives you two tools: a marker and an eraser, each of which can be set to a variety of sizes. While this is a neat feature, I would rather just draw black rectangles over sensitive information, as drawing redactions out by hand usually looks messy.

Napkin is inherently social. A built-in Share button lets you send images to Twitter, iCloud, Facebook, email, and more. One of Napkin’s cleverest features is the File Pip, a button in the upper right labeled “.png”. Drag that button anywhere to add a PNG image of the current napkin. Unfortunately, the File Pip hasn’t been perfected yet, as you can’t drag it to every application. Here at TidBITS, we use a custom app called ShotBOT to upload images to our content management system, but dragging the File Pip to ShotBOT doesn’t work, nor does it work with many other applications. However, if you own a copy of DragonDrop, a neat utility that acts as a holding cell for files
and content, you can drag a PNG from Napkin to DragonDrop, then to any other application you choose. Unfortunately, you can’t directly choose what the resulting PNG is named; it’s a combination of the napkin’s filename and a timestamp.

Despite its professional price tag, Napkin 1.0.2 lacks many professional features and even some basic ones. There is no way to zoom in or out, an essential feature of any image editor. There isn’t yet a system-wide hotkey to take screenshots, though the screenshot feature works well enough with Mission Control, as long as your Napkin window shares a Desktop with the window you would like to take a screenshot of. Although you can align images to each other, Napkin lacks guides, making it difficult to fine-tune alignments. Napkin also lacks image cropping. While you can select only part of a window for a screenshot, once you’ve taken an image, Napkin can’t trim it down further. Nor is there any easy way to limit screenshots to
specific interface elements like menus and dialogs.

Although it’s innovative for a Mac application, Napkin’s gesture-based interface can be annoying. I often found myself drawing an arrow when I wanted to drag an existing element. It can also be difficult to remember how to trigger an arrow instead of taking a measurement. Napkin tries to guess what you want to do, but doesn’t always guess correctly. I hope Napkin’s developers are paying attention to user feedback and will be smoothing out these rough edges.

I want to like Napkin. It’s innovative and clever, and I’m sure it will get better with time. But at the moment, it’s difficult for me to recommend the app, particularly at its current price of $39.99. While its simplicity makes quick diagrams and annotations fun, it lacks the fine control required for production work. I could see using it for quick notes and remote project collaboration, but it grants the user little control over the final output, so if you’re trying to prepare images for a publisher with specific needs, Napkin will likely fail you. I used Napkin for the first image in “Squarespace 6 Web Hosting: Ease of Use and Design Outweigh Flaws” (8 February 2013) and
found myself frustrated at the limitations in image alignment and border options.

Napkin could be an indispensable tool for a development team. The Call-Out feature is a great way to point out small details, and alone could justify the cost of admission for some. But for now, it probably can’t handle all of your visual communication needs, so is instead merely an adjunct to existing tools.