Right now I have over 5,500 email messages split between two inboxes. At some point long ago, I had that down to zero. But email just keeps coming, and I don’t have enough hours in the day to categorize each and every message fastidiously. Besides, if I need to find something, that’s what search is for, right?

In spite of my mediocre email hygiene, I can’t help but clear messages out of my Gmail inboxes while using the new Mailbox app for the iPhone, from Orchestra, Inc. As I scroll through my inbox, I archive messages with a short swipe to the right without even thinking about it. But what makes Mailbox special is that you can postpone messages for later, a feature called Snoozes. (To be fair, this feature isn’t entirely new — a service called Boomerang has offered the capability to pop received messages back to the top of the Gmail inbox for several years — see “Mailplane 2.3.1 Adds Support for Boomerang for Gmail,” 11 April 2011. However,
Boomerang relies on Web browser plug-ins, so it’s not available for iOS devices.) 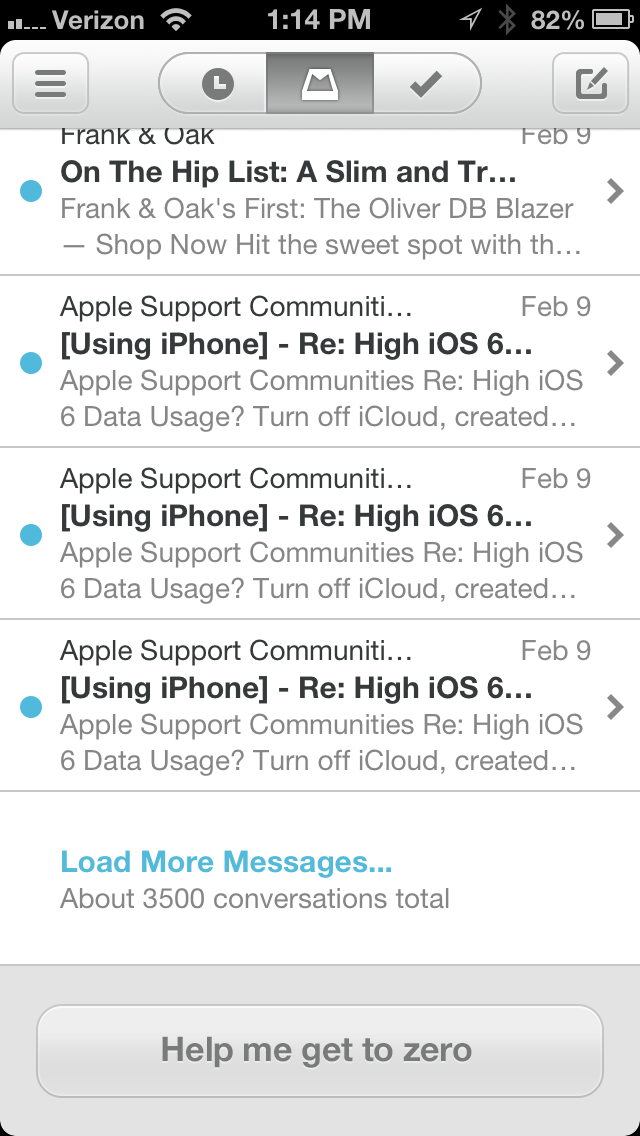 Give a message a quick swipe to the left and a grid pops up asking when you would like to read the message. Messages can be delayed until later in the day, the next day, a month later, or just about any time you wish. When your set time comes up, the message reappears in the top of your inbox, accompanied by a push notification. During the day, I often receive important messages on my iPhone that I would rather reply to when I’m home for the evening. But those messages often get buried in my inbox throughout the day. With Mailbox, I can snooze the
message until the time I usually get in from work. Each snooze can be customized in the settings, to adapt to your schedule. 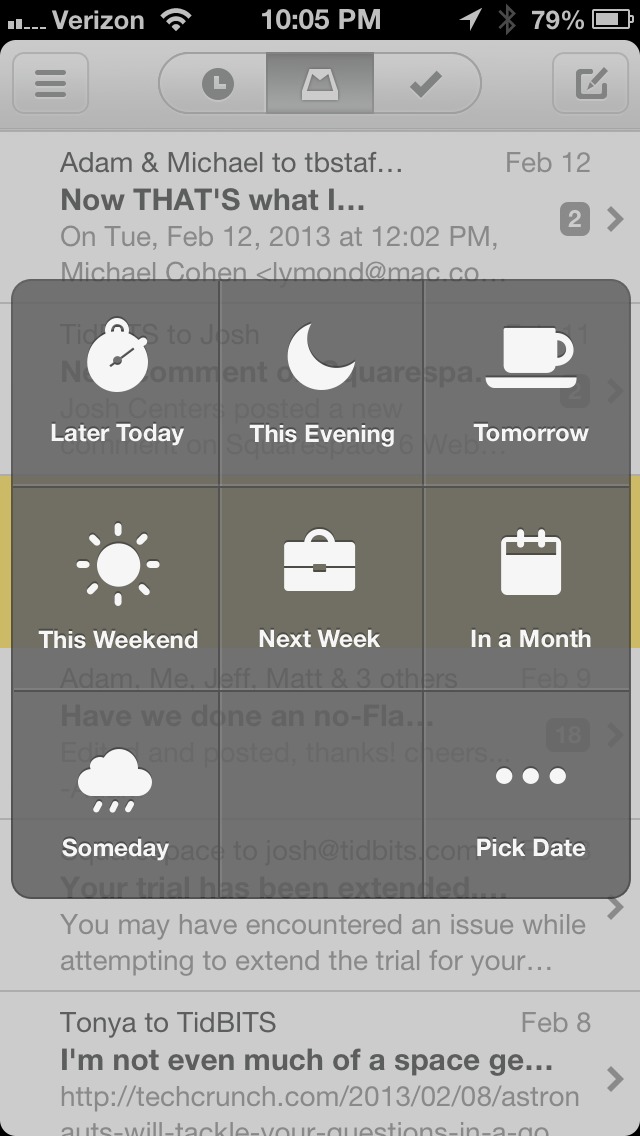 Longer swipes enable more intensive actions. If you’d like to delete instead of archive, swipe a message all the way to the right of the screen. On the other hand, if you’d like to categorize a message instead of delaying it, long-swipe to the left, and you’ll be presented with a selection of lists to which you can add the message. In a strange design choice, these lists aren’t your regular Gmail labels, but are instead a limited subset of new labels. By default, Mailbox includes lists for To Buy, To Read, and To Watch
(apparently the most important thing we do in email is collect items for later consumption), but you can add more in the settings.

Each of these lists is in fact a sub-label of the [Mailbox] label, so you can access those message lists in Gmail itself and in other email clients, though, troublingly, you can’t access all your Gmail labels in Mailbox. By setting things up this way, Mailbox pushes you to use Gmail as a to-do list. I find this a novel approach, but if your email workflow currently makes significant use of labels, then Mailbox is a complete nonstarter. Personally, I rarely use Gmail’s labels, and even if I did, I find labeling email in both iOS’s Mail app and the Gmail app to be clunky. Mailbox’s method of labeling messages is limited, but better suited to touch screens. 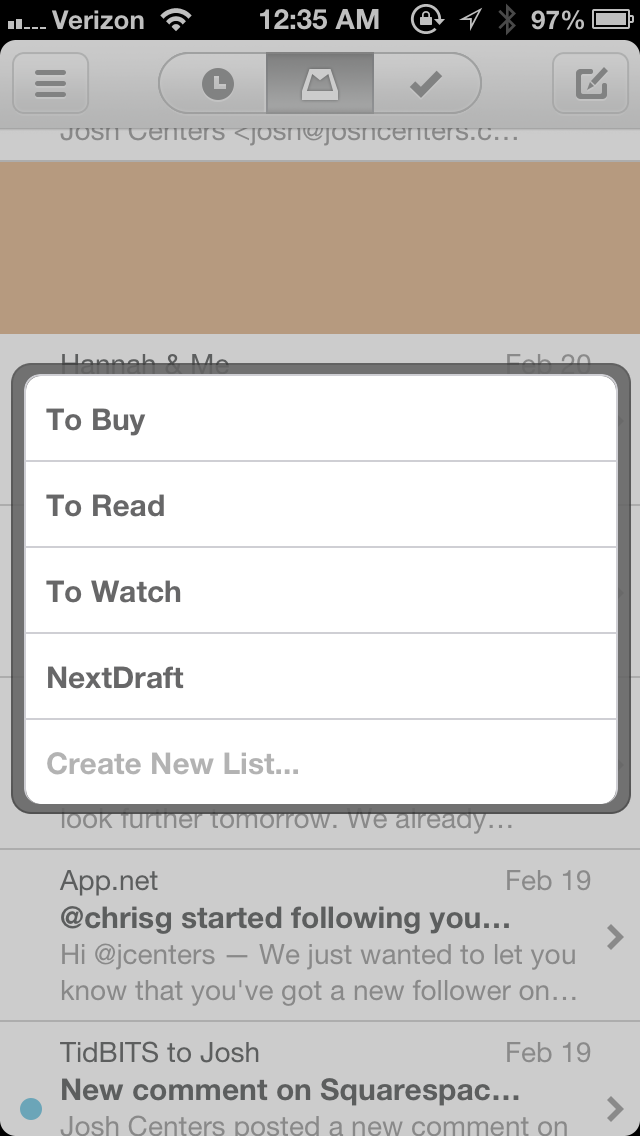 I’m not usually a fan of gesture-based interfaces, as they’re often overly minimalistic, with no guidance for the user beyond an introductory tutorial. I’ve often experimented with the gesture-driven Clear task manager, but if I don’t open the app for a while, I forget how to use it. Mailbox solves that problem in an ingenious way.

As you swipe, a colored icon appears letting you know what you’re about to do. A green checkmark indicates archiving, a red X means deleting, a yellow clock indicates snoozing, and a brown hamburger button means adding to a list. If you mess up or change your mind, just reverse direction and release. And if you do forget which swipes do what you can tap a message to see buttons with all available actions.

Messages that you’ve sorted in Mailbox are easy to find. Three buttons at the top let you switch among snoozed messages, your inbox, and archived items. If you want to move a message from either bin back into the inbox, it’s as easy as a swipe. Accessing Mailbox’s lists takes just slightly more work: reveal the sidebar. It displays your labels, or at least a limited selection of them, including individual inboxes, messages saved for later, lists, Archive, Trash, and Sent. 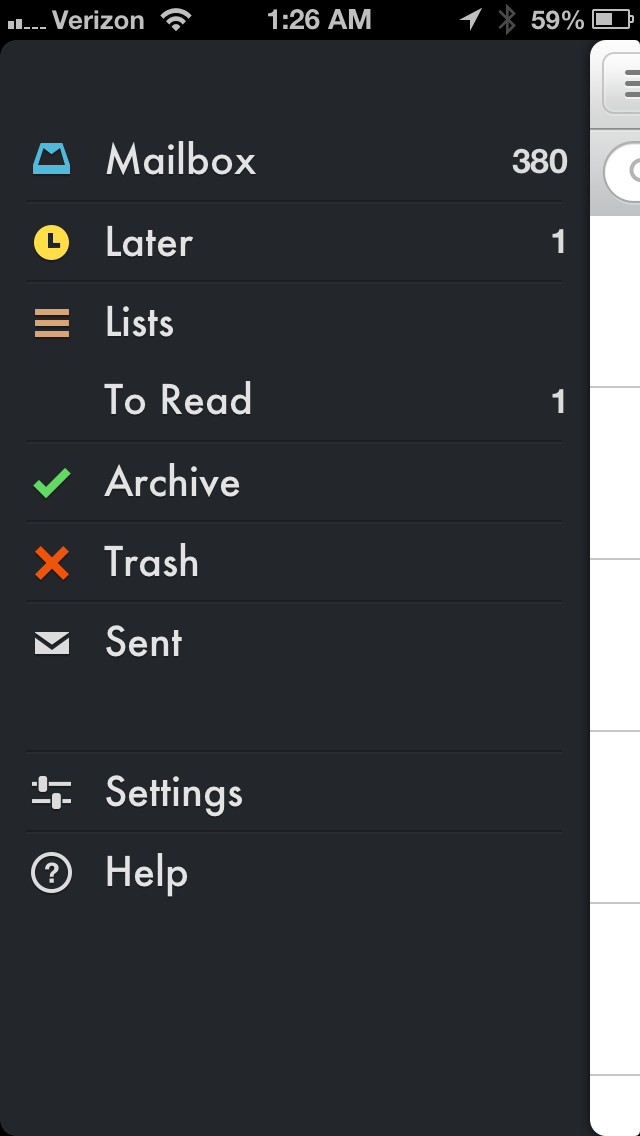 However, since your Gmail labels aren’t all available inside Mailbox, labeled messages won’t be as readily available. You can search, and it’s fast, but in my tests it finds only more recent messages. In short, you’ll still need the Gmail app if you want to be able to see and search through your entire email archive.

But there are more far-reaching concerns with Mailbox than being unable to access all your Gmail labels. What worries me about Mailbox is that all of your email goes through Orchestra’s servers. No amount of assurances on their part can ease my concerns there. First, there’s the privacy issue. It’s bad enough having my email in Google’s hands, but Google is a large and powerful company with a decent track record on security and resisting government demands. Furthermore, I know what Google’s business model is: ads on normal search results (it’s trivial to hide ads in Gmail’s Web interface, and accessing Gmail via an IMAP client also avoids the ads). Orchestra has yet to announce concrete plans on how it intends to make
money, and as a small company may not be as capable of protecting your data against either attack or legal threat.

Perhaps I’m wearing a tin-foil hat, you say. Fair enough. But Orchestra’s approach has already led to major issues, primarily waiting lists and outages. I waited in line behind tens of thousands of people before finally being granted access, like a postmodern iOS Disney World. But once you’re in, it doesn’t mean you’ll be able to use the app. Just a few days before this writing, Mailbox was out for an entire day. I’ve also had messages fail to load entirely.

Despite loving Mailbox’s gesture-based interface, these issues give me serious pause. There are other issues, though more minor. For one thing, Mailbox is currently compatible only with Gmail, though support for IMAP providers is planned soon. For another, Mailbox can’t send messages as plain text, something that will irk many people.

There are other limitations. Many users choose to hide certain Gmail labels from IMAP, like the All Mail label, because otherwise their clients receive duplicated messages. But this practice doesn’t work with Mailbox, as it requires all of your main inboxes to remain unhidden. Also, I haven’t found any way to mark a message as unread. Presumably, this option has been neglected in favor of Snoozes.

While Mailbox includes some novel features for processing incoming email, it lacks a lot of the basics, and introduces security and reliability concerns. As it stands, Mailbox probably won’t work as your main email client. It’s a taste of what mobile email could look like in the future, and offers some interface innovations that other email clients would do well to imitate, but it has a long way to go.

If you can hold your nose and put up with these issues, both minor and major, Mailbox may be worth a look. An endless number of tech writers bash email as an ancient technology that’s overdue for the scrap bin, but not me. Yes, email is old by contemporary standards, but it’s still an amazing technology. How many other technologies can exchange messages and files across the world, through any network, to anyone, regardless of which operating system or network provider they choose to use? Email is universal, email is versatile, email is still amazing after all of these years. (And I’m not just saying that because my publisher wrote “Why Email Remains the King of Internet
Communications,” 29 October 2009.) The pre-release popularity of Mailbox proves that email hasn’t outlived its usefulness for a vast number of people, and while Mailbox isn’t likely to become your main email client yet, perhaps its innovative features will be shored up with a firmer foundation as it matures.