TextWrangler 4.5 — Offering a significant update to its free general-purpose text editor, Bare Bones Software has released TextWrangler 4.5 with a Dostoyevskian list of additions, improvements, and fixes that brings the app in line with many of the current features found in its more powerful (and non-free) sibling, BBEdit. One of the first additions you’ll notice is the new Go menu, which liberates several navigation commands from the previously overcrowded Search menu. As in BBEdit’s Go Menu, you’ll be able to navigate between “jump points” within a document — either those spots where you’ve
placed a cursor or ones that you specifically set. You can move around to the various points by selecting Previous or Next from the Go menu, or specify a line number. 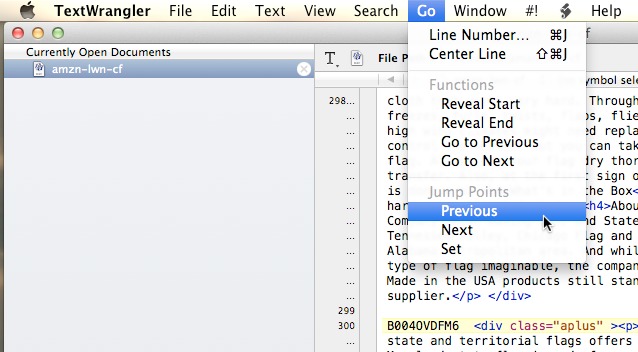 The Search menu adds a Compare Against Previous Version item, which uses OS X’s Versions to compare the active document against a previously saved version. And document versioning goes back to the point where the document was originally saved (as long as you don’t hit the limit set by OS X). The document window has been rejiggered along the lines of BBEdit, with the text view toolbar at the top (displaying the document path) slimmed down to a single line and Last Saved indicator moved to the bottom. A new keyboard
preference has been added, enabling you to move the insertion point by pressing Page Up or Page Down (added to aid those “refugees from other platforms” where that’s the default behavior). TextWrangler is also now compatible with Retina displays.

Adobe Acrobat XI and Reader XI 11.0.02 — Adobe has updated Acrobat XI and Reader XI to version 11.0.02 solely to improve the security of the two apps. The updates address critical vulnerabilities in versions 11.0.01 and earlier, vulnerabilities that could enable an attacker to take control of your system (detailed over at The Next
Web). The update for Acrobat XI is just 11.9 MB; meanwhile you can choose between the delta updater (25 MB) or the full installer (76.6 MB) for Reader XI. Additionally, Adobe recommends that users of older editions of Acrobat and Reader update their software as well, with Acrobat getting version 10.1.6 (13.5 MB) and version 9.5.4 (10.8 MB). If you can’t update to Reader XI 11.0.02, you can similarly choose version 10.1.6 (17 MB) and version 9.5.4 (5.4 MB for Intel, 5.6 MB for PowerPC). ($449 new for Acrobat XI Pro, free updates)

Transmit 4.3.2 — Panic has released Transmit 4.3.2, a maintenance release of the file transfer program that contains fixes for an issue with connecting to servers using Private Keys, the loss of some custom Favorite icons, and an issue where the Transmit Disk Menu wouldn’t show all Favorites. It also updates its AppleScript support and Automator actions. ($34 new, free update, 26.5 MB, release notes)

KeyCue 6.4 — With the update to version 6.4 of KeyCue, Ergonis has added an optional menu bar icon as another way to invoke the keyboard shortcut utility. If you’ve configured separate smaller tables for menu commands, system-wide hotkeys, and macros, clicking the menu bar icon enables you to see them in one large, combined table. The update also no longer displays the shortcut table if your mouse’s scroll wheel is operated while pressing modifier keys, puts a stop to popping up the shortcut window when zooming your screen with the scroll wheel, provides a workaround for an issue with Mission Control that
displayed the shortcut table in a miniature desktop, correctly highlights shortcuts that don’t require modifier keys, and works around an issue with OS X 10.8 Mountain Lion where all items in the Services menu were displayed even if they weren’t available for the current situation. (€19.99 new with a 25-percent discount for TidBITS members, free update, 2.4 MB, release notes)

Java for OS X 2013-001 and Java for Mac OS X 10.6 Update 13 — Apple released two Java updates shortly after the company disclosed to Reuters that a small number of its employees’ Macs had been hacked via the same vulnerability within the Java plug-in that had been used against Facebook. Java for OS X 2013-001 is for OS X 10.8 Mountain Lion and 10.7 Lion while the Java for Mac OS X 10.6 Update 13 is specifically for 10.6 Snow Leopard; both bring Java SE 6 up to version 1.6.0_41.
The updates are available via the App Store app or Software Update and direct download, and Apple reminds you to quit any Web browsers and Java applications before installing either one. With multiple vulnerabilities listed on Apple’s page outlining the security content for these releases, it’s a good idea to grab the Java update for your system as soon as you can. (Free, 66.6 MB and 72.4 MB)

iTunes 11.0.2 — Apple has released iTunes 11.0.2, bringing back the Composers view after it had been left out of the initial release of iTunes 11, frustrating classical music aficionados in particular. However, the Composers view doesn’t automatically appear amongst the view option buttons when the Music library is displayed. To add it, go to the General pane of the iTunes Preferences window and select Show Composers. The Composers view button then appears between Artists and Genres. 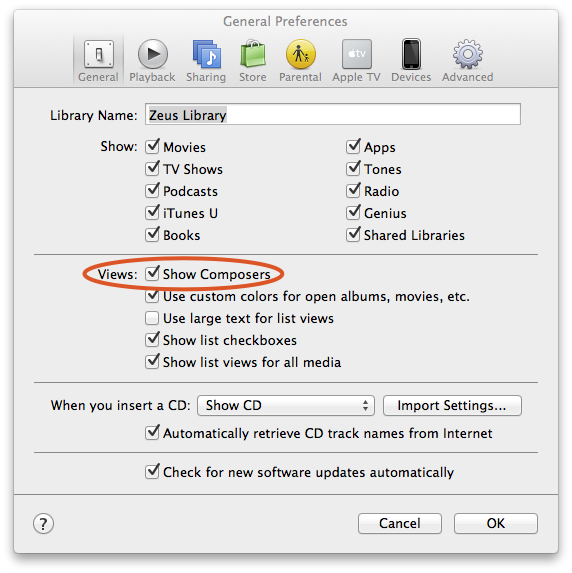 iTunes 11.0.2 also promises to improve responsiveness when syncing playlists with a large number of songs, and it fixes a bug that prevented purchases from showing up in your iTunes library. It’s available as a direct download from Apple’s iTunes Web page (188 MB), via Software Update
on systems prior to OS X 10.8 Mountain Lion (194.7 MB), or via the Mac App Store on Mountain Lion (54.2 MB).

Firefox 19 — Continuing its quest to make version numbers as confusing as possible, Mozilla has released Firefox 19 just five weeks after the release of version 18. The big news is that Firefox now boasts an HTML5-based PDF viewer, enabling you to view PDFs directly in the browser window without relying on a Firefox plug-in or downloading the file to examine in your favorite PDF reader. (For a review of the hoops one had to jump through to view a PDF in Firefox before
the release of version 19, see Steve McCabe’s “Wrangling PDFs in 2012’s Web Browsers,” 1 June 2012.) 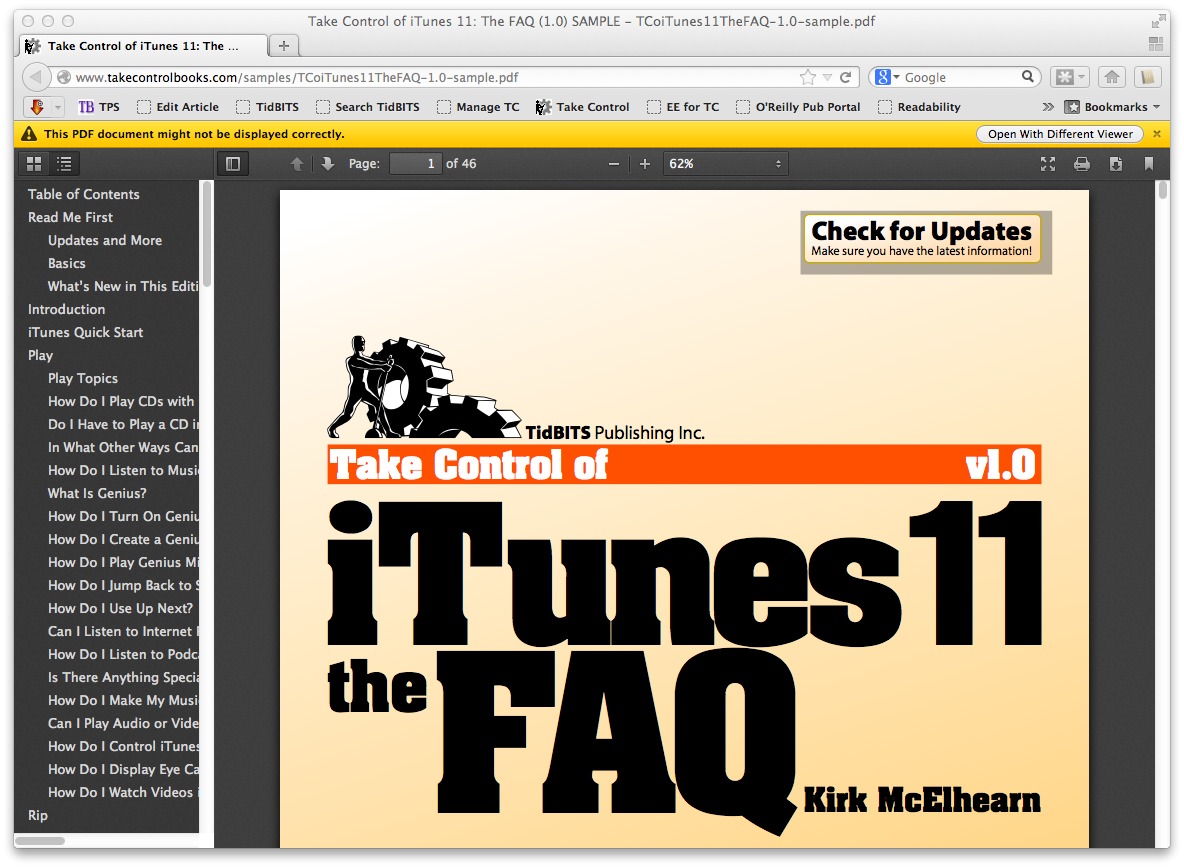 With a few more options than Google Chrome’s built-in PDF viewer, the Firefox PDF viewer offers a full-screen mode, page numbering, several zoom presets, and both thumbnails and bookmarks in addition to standard download, print, and zoom in/out functions. It also provides a way to copy the current view of a PDF into another tab window, which is a handy bookmark workaround when you’re reading through a long document. 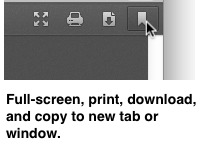 Firefox 19 also brings a number of developer-related goodies, including debugger support for pausing on exceptions, a Remote Web Console for connecting to Firefox for Android or the Firefox OS, and the capability to open Web Console CSS links in the Style Editor. (Free, 37.2 MB, release notes)

BusyCal 2.0.3 — BusyMac has released BusyCal 2.0.3, a maintenance release with an assortment of fixes and user interface additions. The update fixes a syncing bug that unsubscribed Google calendars, adds Show Declined & Canceled Events to the View menu, displays meeting requests in the Inbox for Google Calendar (as well as older CalDAV servers), sends Sync Alarm snoozes/dismissals across multiple devices when syncing through iCloud, enables alarms to be added to meeting invitations, and merges duplicate birthdays. It also adds the following localizations: German, French, Dutch, Spanish, Italian, Japanese, Korean,
Portuguese (Portugal), and Portuguese (Brazil). You can download a trial of BusyCal via the BusyMac Web site, but the only way to purchase the app is through the Mac App Store, where it’s currently selling for $29.99 through 15 March 2013. Remember, you can learn more about BusyCal in the free “Take Control of Calendar Syncing and Sharing with BusyCal.” ($49.99 new, free update, 9.0 MB, release notes)